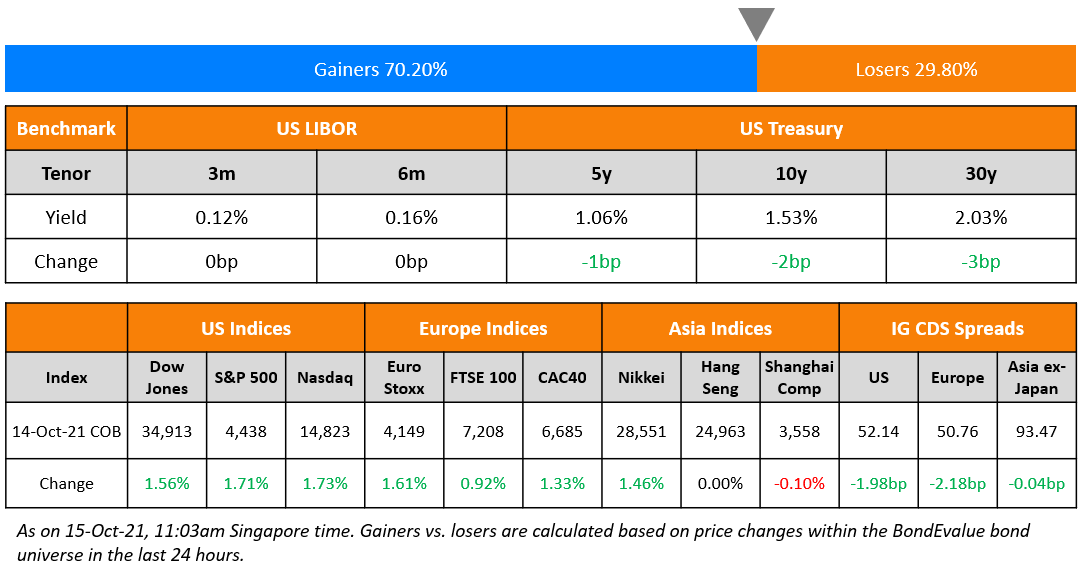 Wall Street saw a sharp jump higher with the S&P and Nasdaq up 1.7% each, with bank earnings coming stronger than forecasts (scroll below for details). All sectors ended in the green led  by Materials and IT, up 2.4% and 2.3% respectively. US 10Y Treasury yields eased 2bp to 1.53%. European stocks also had a merry day with the DAX, CAC and FTSE up 1.4%, 1.3% and 0.9% respectively. Brazil’s Bovespa ended 0.2% lower. In the Middle East, UAE’s ADX was 0.3% higher and Saudi TASI was up 0.6%. Asian markets have opened positive too with Shanghai, HSI, STI and Nikkei up 0.1%, 0.6%, 0.4% and 1.3%. US IG and HY CDS spreads tightened 2bp and 10.1bp respectively. EU Main CDS spreads tightened 2.2bp and Crossover CDS spreads tightened 13bp. Asia ex-Japan CDS spreads were flat.

US initial jobless claims for the prior week fell 36k to 293k, the first sub 300k print in 19 months and better than the 319k forecast. Meanwhile OPEC trimmed its oil demand outlook for 2021 to 5.8mbpd compared to its previous estimate of 5.96mbpd while maintaining its 2022 projections at 4.2mbpd. 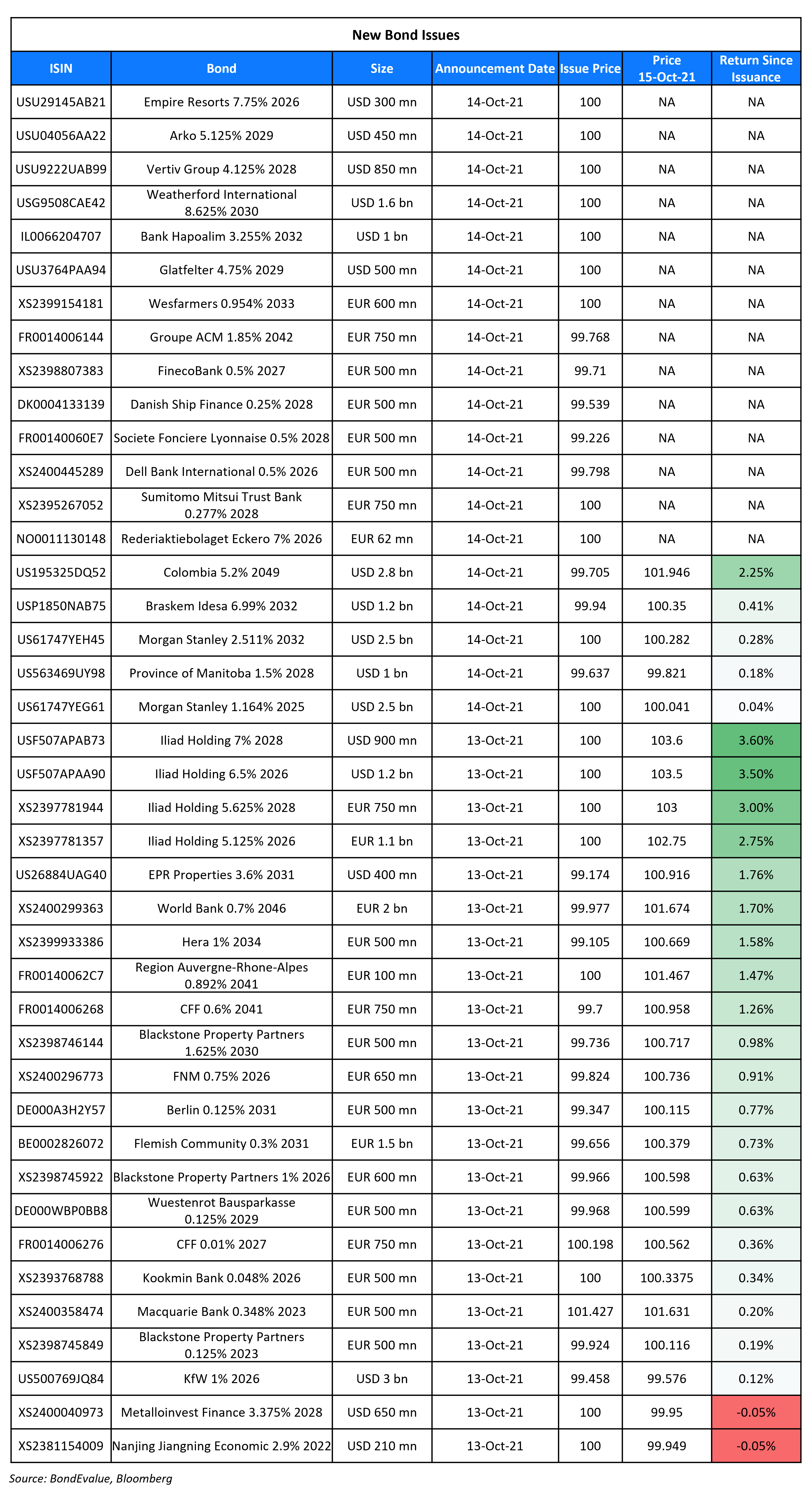 “You’ve got to prick this bubble a little bit,” Gorman said. “Money is a bit too free and available right now.” On the timing of the rate hike, Gorman says “certainly by the first quarter of next year I’d start moving.” “They have got a lot of capacity to move.” “I think the market has digested that the Fed will have to move, not just on tapering, but rate increases,” he said. “And by the way, we are 10 rate increases away from what would be considered normal.”

On the view that view that 10-year yields are likely to rise to 2% over the next 12 months – Bill Gross, co-founder of Pacific Investment Management Co

“Markets have likely seen their secular, long term lows in interest rates, but expectations for a 30-year bear market to match the previous 30-year bull market are way overdone.” “Bonds’ ‘days of wine and roses’ may be over,” but they “may do nicely while investors wait out uncertainties related to the U.S. budget, GDP growth in China, and run-ups in energy prices as we approach winter in the Northern hemisphere,” he said.

On the view that inflation will drive bond yields up – Michael Schumacher, head of macro strategy at Wells Fargo Securities

“Number one is inflation. It’s everywhere.” “The Fed is probably going to taper [and] announce it next month,” he said. “It’s going to push yields up in our view. [Treasury yields] will go up a bit more, and then probably drop in December.”

According to Wang, low yields are hard to decipher “if you assume that bond yields are basically a reflection of economic conditions and inflation expectations.” “And there are definitely people who buy bonds with that framework, but there are also many people who buy bonds without that framework.” “You can’t really take the price of Tesla as an input in your model and back out supposedly market expectations for revenue growth, because people are buying Tesla for momentum,” says Wang. “It’s a mistake to infer economic conditions from them,” he says.
Jared Gross, head of institutional portfolio strategy at JPMorgan Asset Management
“When the rhetoric around the bond vigilantes was at its peak there was a sense that if fiscal and monetary policy were not taking care of inflation then the markets would do it. That the bond market would step in and drive interest rates higher -– and the effect on the economy would lead to the desired result.” “In this world, the amount of capital – whether you are looking at central bank holdings, insurance companies, pension funds, retirees, that is either entirely or somewhat price insensitive dwarfs the amount of capital that is willing to short Treasury bonds as a way to send a message on inflation.”
John Fath, managing partner at BTG Pactual Asset Management
“We may not have a time when the Fed is not involved in the Treasury market during our lifetimes.” “It’s almost like a prisoner’s dilemma for the Fed: For them to completely extract themselves from the market may cause an incredible amount of disruption.” 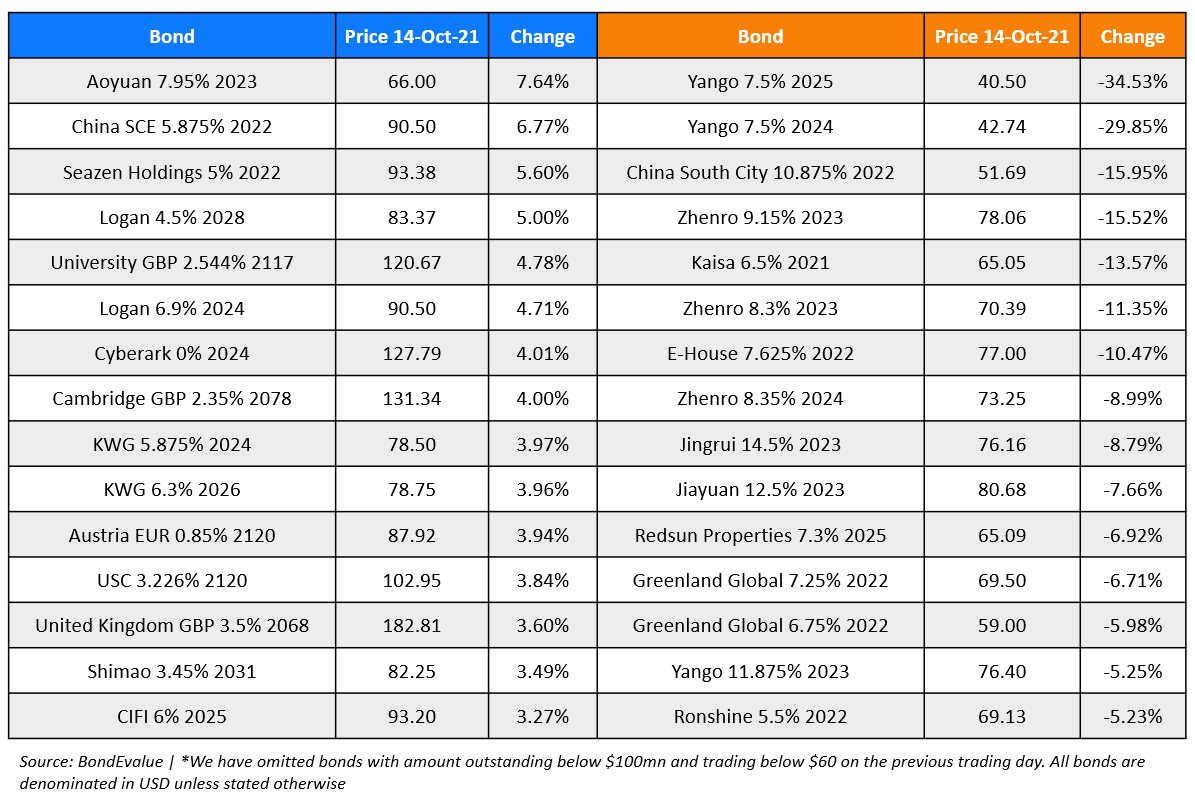