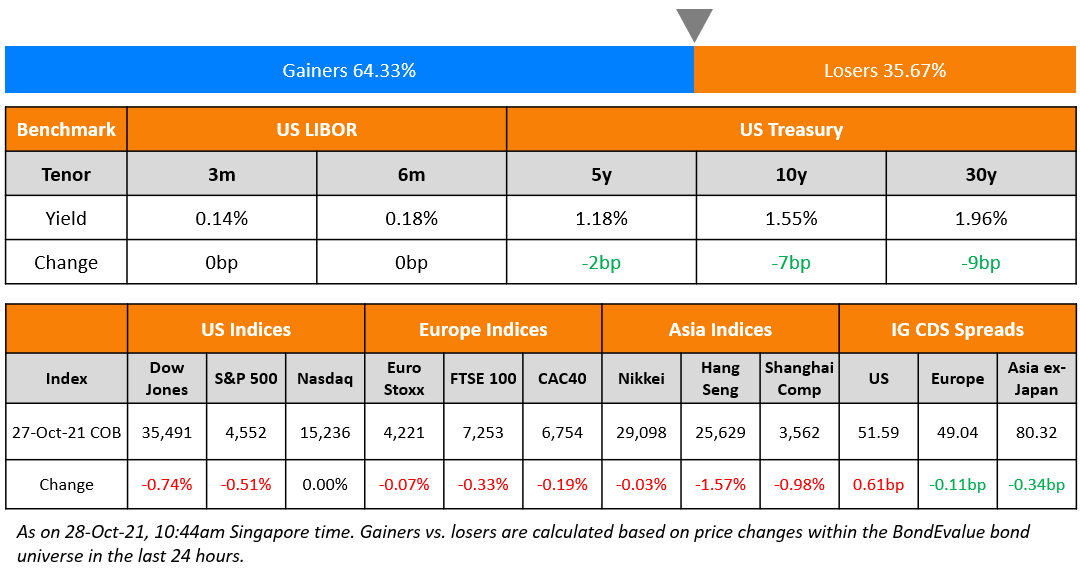 US equities ended mixed with the S&P down 0.5% while the Nasdaq was unchanged. Besides Communication Services and Consumer Discretionary, up 1% and 0.2%, other sectors were in the red, dragged by Energy and Financials, down 2.9% and 1.7% respectively. US 10Y Treasury yields eased 7bp to 1.55% with the 2s10s flattening to 102bp, the lowest level in over a month. European stocks were slightly lower with the DAX, CAC and FTSE down 0.3%, 0.2% and 0.3% respectively. Brazil’s Bovespa was near flat. The Brazilian Central Bank hiked rates by 150bp, the biggest in nearly two decades and pledged a similar hike in December in a bid to tame rising inflation. In the Middle East, UAE’s ADX and Saudi TASI were down 0.6% and 0.3%. Asian markets have opened lower – Shanghai, HSI, STI and Nikkei were down 1%, 0.3% 0.3% and 0.9% respectively. US IG and HY CDS spreads were 0.6bp and 3.3bp wider. EU Main CDS spreads were 0.1bp tighter while Crossover CDS spreads were 0.9bp wider. Asia ex-Japan CDS spreads tightened by 0.3bp. 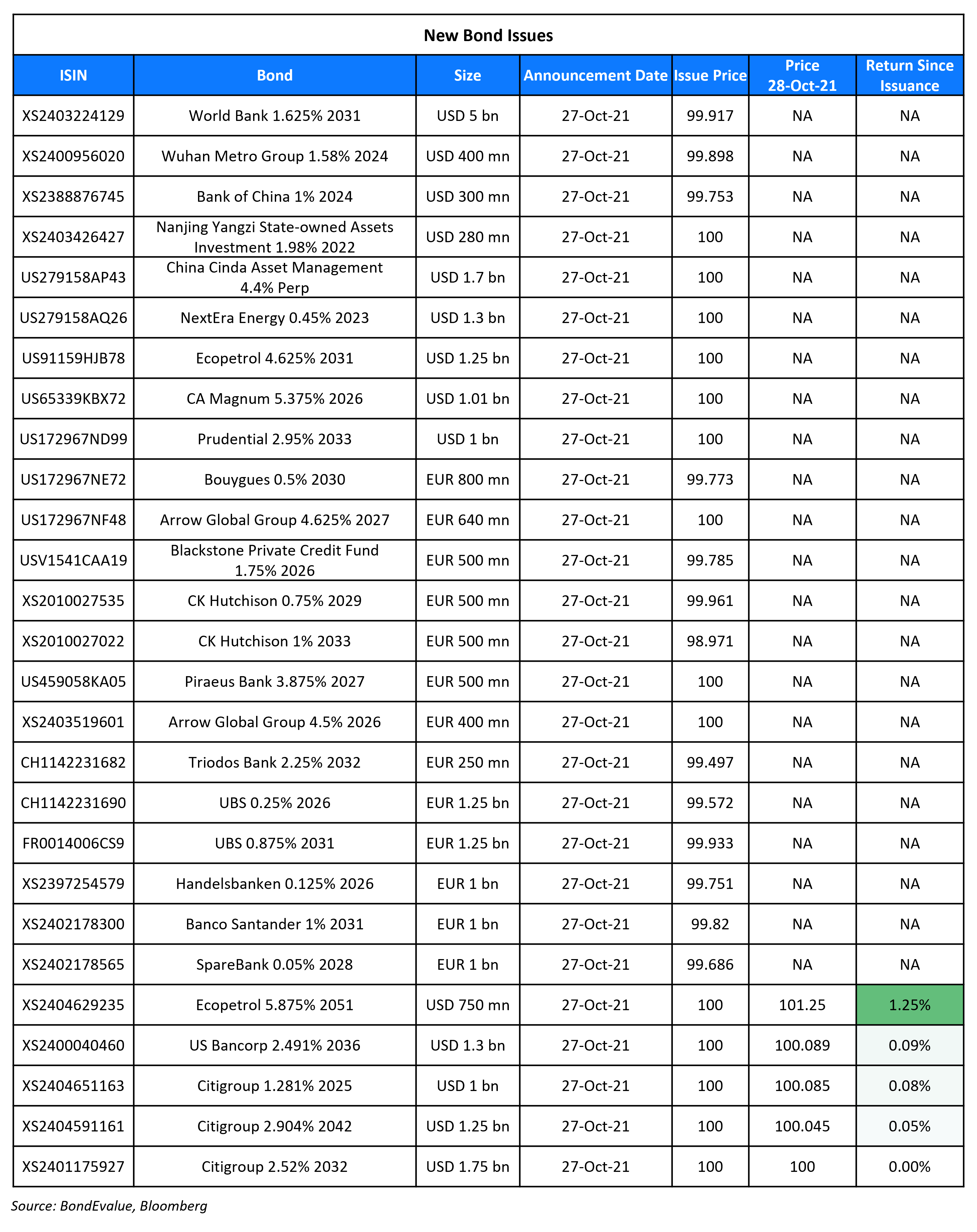 UBS raised €2.5bn via a two-tranche deal. It raised:

Prudential raised $1bn via a 12NC7 tier 2 bond at a yield of 2.95%, 30bp inside initial guidance of 3.25% area. The bonds have expected ratings of A3/A– (Moody’s/S&P), and received orders over $2.5bn, 2.5x issue size. Proceeds will be used for capital expenditure, funding maturing and/or existing obligations, and general corporate requirements.

Citigroup raised $4bn via a three-tranche deal. It raised:

The bonds have expected ratings of A3/BBB+. For the 4NC3 social bond, Citigroup intends to allocate an amount equal to the net proceeds of the sale of the notes exclusively to finance or refinance a portion of its or its subsidiaries’ portfolio of assets that meet Citigroup’s Social Finance Asset Portfolio Eligibility Criteria and do not meet any of the Exclusionary Criteria in accordance with Citigroup’s Social Finance Framework. Proceeds for the 11NC10 and 21NC20 bonds will be used for general corporate purposes.

Ecopetrol raised $2bn via a two-tranche deal. It raised:

The bonds have expected ratings of Baa3/BB+, and received combined orders over $7.6bn, 3.8x issue size. Proceeds will be used to prepay a portion of the outstanding principal amount of the acquisition loan to fund its ISA acquisition.

ST Telemedia raised S$500mn via a Perp NC7.5 bond at a yield of 4.2%, 30bp inside the initial guidance of 4.5% area. The bonds are unrated, and received orders over S$1.85bn, 3.7x issue size. Proceeds will be used to support general corporate needs, including new investments and acquisitions, debt refinancing, capital expenditure and working capital requirements. The coupon will reset at the end of year 7.5 and every seven years thereafter to the prevailing SORA-OIS + 374.8bp. Singapore investors bought 96% while others took 4%. Private banks and others received 65% while insurers, funds, banks and corporates took 35%.

BOC London branch raised $300mn via a 3Y sustainability re-linked bond (Term of the day, explained below) at a yield of 1.084%, 43bp inside the initial guidance of T+75bp area. The bonds have expected ratings of A1/A (Moody’s/Fitch), and received orders over $700mn, 2.3x issue size. Net proceeds will be used to finance and/or refinance the eligible sustainability-linked loan portfolio as defined in BOC’s sustainability re-linked bond management statement. The bond coupon will have two parts – a base coupon rate of 1% (set at issuance) and a coupon adjustment rate, which is re-linked to the underlying sustainability-linked loan’s sustainability performance targets as set out in the bank’s management statement. The coupon adjustment will be capped at a 5bp step-up or step-down per annum, starting from year two and is non-cumulative. The new bonds are priced 4.4bp wider to its existing 0.75% green 2024s that yield 1.04%.

China Cinda Asset Management raised $1.7bn via Perp NC5 AT1 preference shares at a yield of 4.4%, 40bp inside the initial guidance of 4.8% area. The bonds have expected ratings of B1 (Moody’s), and received orders over $4.7bn, 2.8x issue size. Proceeds will be used to replenish Cinda’s AT1 capital. The transaction is the first offshore bond deal by a Chinese bad-debt manager since the problems at China Huarong Asset Management came to light in April 2021. The notes have a dividend stopper, and are first callable on 3 November 2026, and if not called, the coupon will reset every five years to the prevailing US 5Y Treasury + 323.2bp.

CK Hutchison raised €1bn via a two-tranche deal. It raised:

The bonds have expected ratings of A2/A/A-, and received combined orders over €1.6bn, 1.6x issue size. Proceeds for the green portion will be used to finance or refinance, in whole or in part, assets, projects, investments and other related and supporting expenditure in accordance with its sustainable finance framework. Proceeds for the non-green tranche will be used to refinance certain indebtedness and for general corporate purposes.

Nanjing Yangzi State-owned Assets Investment raised $280mn via a 364-day bond at a yield of 1.98%, 42bp inside the initial guidance of 2.4% area. The bonds have expected ratings of A– (Fitch), and received orders over $910mn, 3.3x issue size. The bonds will be issued by indirect majority-owned subsidiary Xi Yang Overseas. Nanjing Yangzi State-owned Assets Investment Group has provided a keepwell. The Group is the Nanjing city government’s sole vehicle for developing infrastructure and providing public utilities in Nanjing Jianbei New District in Jiangsu province in China. The new bonds are priced 4bp wider to its existing 3.625% 2022s that yield 1.94%.

Wuhan Metro Group raised $400mn via a 3Y sustainability bond at a yield of 1.615%, 37bp inside the initial guidance of T+120bp area. The bonds have expected ratings of A3/A (Moody’s/Fitch), and received orders over $1.7bn, 4.3x issue size. The group is the sole operator of the Wuhan Metro in China, and is responsible for its financing, construction and management. The new bonds are priced 20.5bp tighter to its existing 2.96% green 2024s that yield 1.82%.

“Sentiment has largely taken a bigger knock than fundamentals…Investment is all about risk-reward and for many names, this is looking favourable after recent moves.”

“Our view on China has not changed,” Garnry said. “It is not cheap given the risks in the housing market, debt markets, and changing supply chains. China’s zero covid policy will also continue to create roadblocks for the economy.”

“The goods bottlenecks we’ve seen this year are just the dress rehearsal for the big story next year which will be the service-sector boom and all the related pricing and policy pressures that come with that…That could provide more headaches for the central banks…The repricing of interest rates globally is incomplete”.

“Brazil’s central bank accelerated the pace of rate hikes, pledged another large increase in December and indicated that monetary policy will end the cycle tighter than previously anticipated….what the BCB thinks of proposed fiscal changes and what they mean for neutral rates — remain unanswered.”

“The central bank raised the balance of risks…This implies a greater probability of inflation running higher than the baseline outlook.”

“The central bank should have come out with an even tougher message…It could have taken a risk and delivered a bigger rate increase. The inflation outlook is very ugly.”

Cindy Wang, an analyst at DBS

“Retail customers have shifted their money from the property sector to the financial markets, thereby benefiting banks’ fee income due to stronger sales in wealth management products…We don’t expect any huge jump in NPLs during the third quarter caused by Chinese property developers. If these developers’ repayment problems continue into the fourth quarter, then NPL for the fourth quarter may rise by a few basis points” 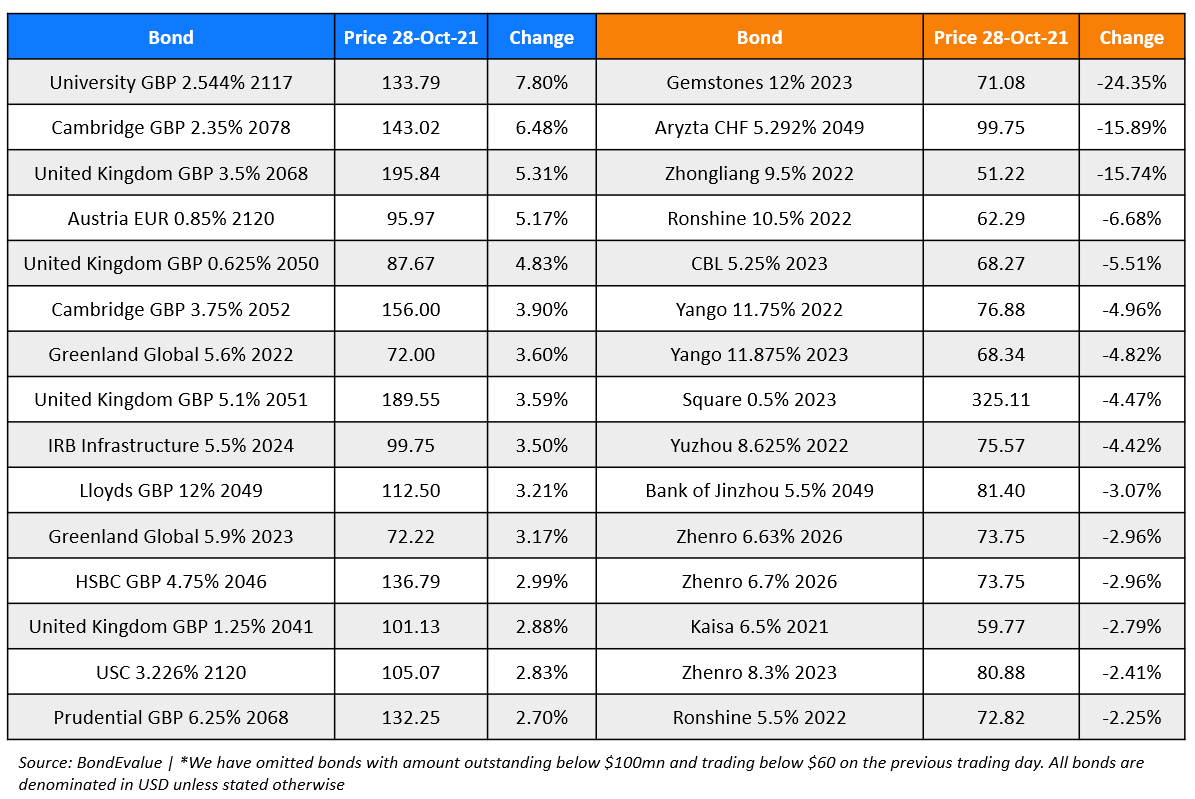