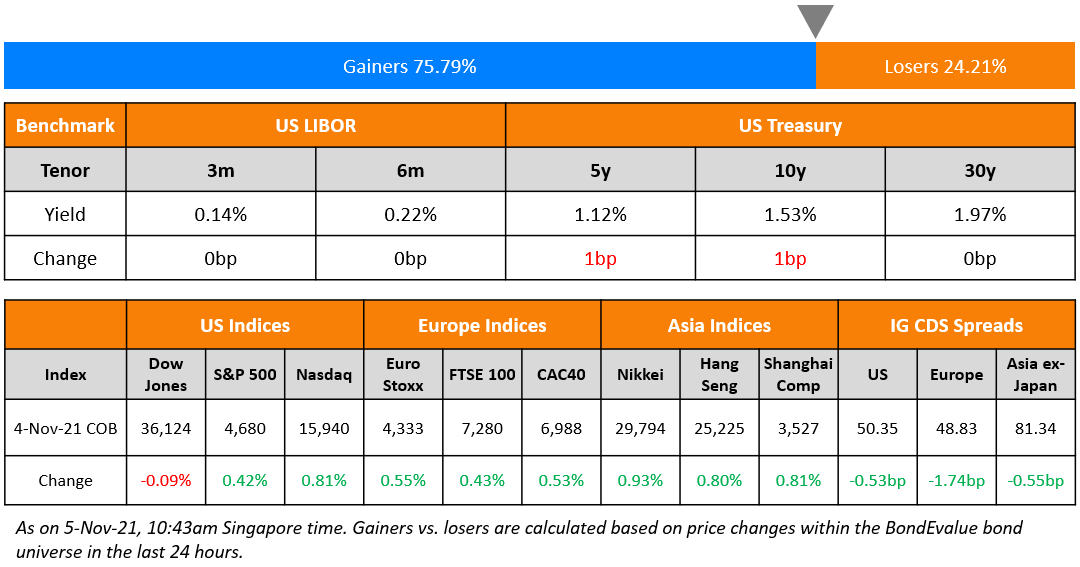 The US Federal Reserve said it would reduce Treasury purchases by $10bn and mortgage-backed securities (MBS) by $5bn per month. The Bank of England surprised markets by keeping rates steady with the MPC voting 7:2 against a rate hike vs. predictions of a 6:3 majority for a hike. US jobless claims for the prior week came at 269k, better than forecasts of 275k. Focus shifts to today’s NFP data for October, with economists expecting a 450k print.

Join us virtually for the BondbloX panel discussion on The Future of Bond Markets | 11 November 3:45pm SGT 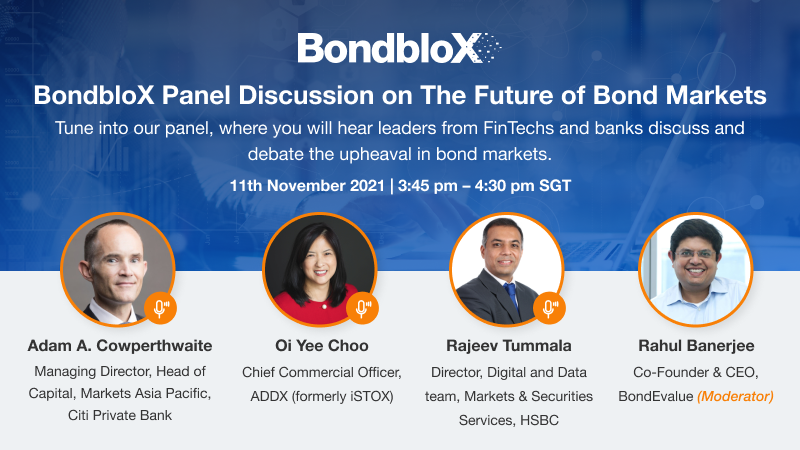 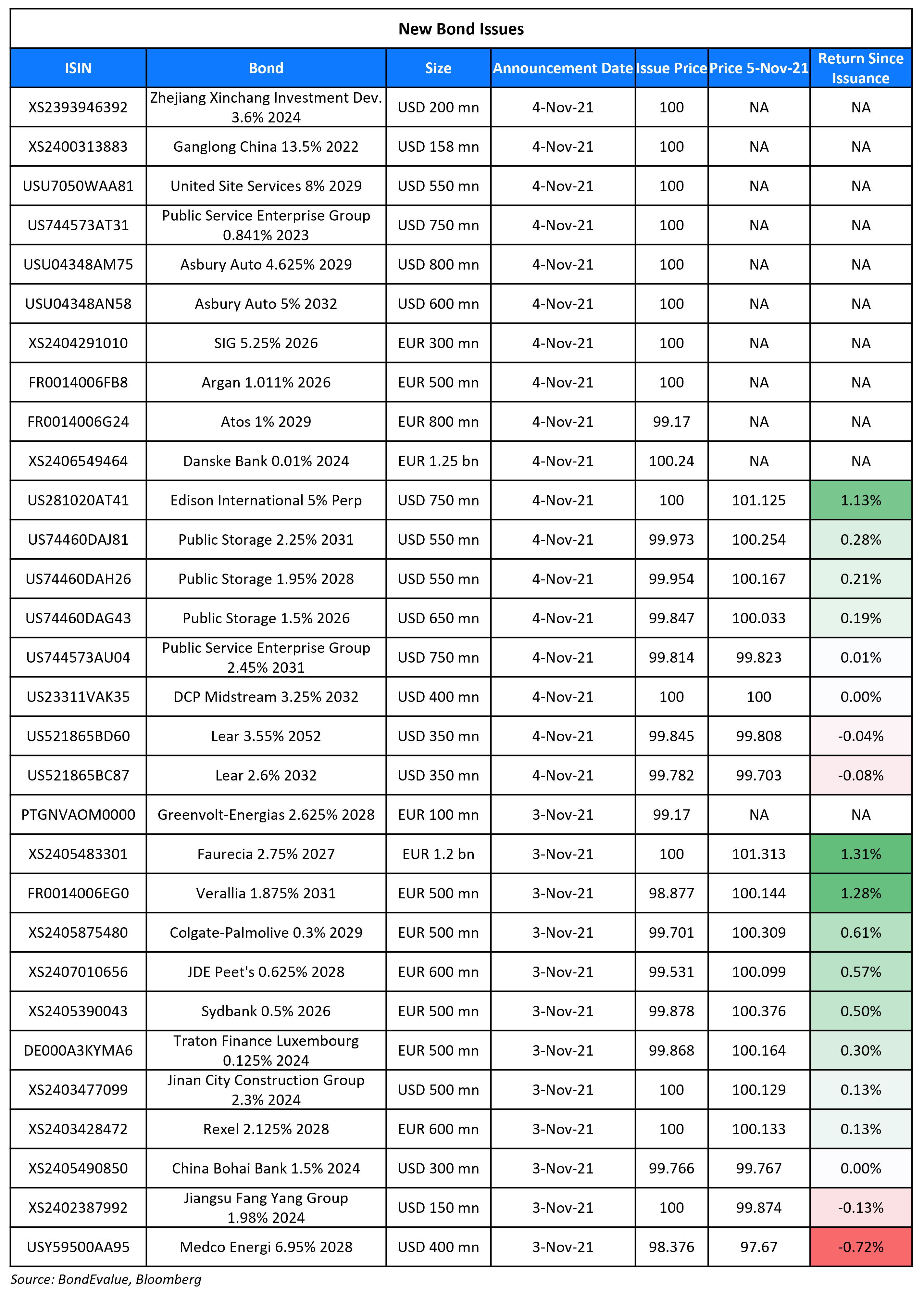 Medco Energi raised $400mn via a 7NC3 bond at a yield of 7.25%, unchanged from initial guidance. The bonds have expected ratings of B1/B+/B+, in line with the issuer. Proceeds will be used to refinance debt and/or fund acquisitions. The bonds are issued by wholly owned indirect subsidiary Medco Laurel Tree and guaranteed by Medco Energi. The US bought 49%, Asia 38% and Europe 13%. Fund managers and asset managers took 92% while banks, securities firms and corporates took the remaining 8%.

Ganglong China Property raised $31.3mn new money via a 364-day bond at a yield of 13.5%, unchanged from initial guidance. It also raised $126.7mn from an exchange offer of its outstanding $150mn 13.5% notes due December 1, 2021 bringing the total size of the issuance to $158mn. The bonds are unrated. Proceeds will be used for refinancing and working capital / general corporate purposes.

China Bohai Bank HK branch raised $300mn via a 3Y bond at a yield of 1.58%, 35bp inside initial guidance of T+120bp area. The bonds have expected ratings of Baa3/BBB– (Moody’s/S&P), and received orders over $1.6bn, 5.3x issue size. Proceeds will be used for working capital purposes.

Jiangsu Fang Yang Group raised $150mn via a 3Y bond at a yield of 1.98%, 17bp inside initial guidance of 2.15% area. The bonds have expected ratings of Baa3 (Moody’s), and received orders over $650mn, 4.3x issue size. Proceeds will be used for offshore debt repayment. The bonds are issued by Haichuan International Investment and guaranteed by Jiangsu Fang Yang Group. The bonds are supported by a letter of credit from China Zheshang Bank Nanjing branch.

Zhejiang Xinchang Investment raised $200mn via a 3Y bond at a yield of 3.6%, 20bp inside initial guidance of 3.8% area. The bonds are unrated. Proceeds will be used for debt refinancing and project construction.

Panda bonds are renminbi denominated notes sold by a non-Chinese issuer in onshore China. The first of its kind was issued by the IFC and ADB in 2005. While these bonds attract Chinese investors, they have also gained traction from international investors. It also helps issuers diversify investor bases and reduce currency risk. Hong Kong’s CPID issued an RMB 1bn ($156mn) panda bond.

On the debate over who will chair the Federal Reserve

“It would be a shock.” “With everything going on — between inflation, and the jobs market and everything else — changing midstream, it’s not necessarily the time to break the continuity that Powell brings.”

“We’re at a particularly fraught time, challenging time for the Fed, where the markets are challenging the Fed’s guidance. So how much credibility will that guidance have if you have a new Fed chair?”

“There’s enough institutional memory and institutional stability to ensure the policy is not going to deviate wildly from what we’ve seen thus far,” Amoroso said. “Whoever the Fed chair is, or whatever the composition of the Fed is, there’s likely a framework in place that’s going to endure.”

“Chairman Powell has repeatedly followed policies that have supported asset prices.” “At some point, I think markets would realize it is almost impossible to find a replacement who will be friendlier.”

“The risk is that this cycle is moving at a rapid clip.” “A new Fed chair may be put to the test quickly if financial conditions deteriorate or inflation needs to be snuffed out more urgently.”

“There is one job in November and that is to smoothly get the taper underway.” “They are going to want to sound calm and optimistic amid all of the noise in the economy. Powell has been at the epicenter of enough brouhahas over the balance sheet.”

“This is the most well-communicated policy change in recent Fed history.” “The only question that matters now is ‘how long after you are done tapering will it be before you can raise rates?’”

“If you are looking for a way to balance the risks against an overreaction, you change the statement to be a little more worried about uncertainties about the near-term outlook,” Reinhart said.

Markets should focus on “to what degree Powell stresses each meeting is ‘live’ to rediscuss tapering.” “If he emphasizes that cuts are to be renegotiated at each meeting, I think markets will see a high risk that tapering could be accelerated in 2022, and that would automatically bring forward the first rate hike.”

Zhijun Zhang, chairman of Beijing Dingnuo Investment Management Co
“The massive rating downgrades and lack of substantial easing of property curbs triggered the plunge in domestic bonds.” “Concerns are growing about an increasing number of private developers, especially after the dramatic sales slowdown.”
Wei Liang Chang, macro strategist at DBS Bank Ltd.
“The real estate sector is clearly not out of the woods, and sentiment in the onshore market may turn as fragile as offshore.”

On the doubts over ESG focus in Teva’s new issuance

John McClain, portfolio manager at Brandywine Global Investment Management
“This bond offers a step in the right direction, but leaves investors questioning the real teeth behind it.” “The cost of failure is minimal.”

Kare Schultz, Teva’s chief executive officer
“It makes all the sense in the world, because what is it that Teva contributes to the world? It’s really affordable, high-quality medicine. That’s what you do when you make generics and biosimilars, and we do more than anybody else.” “The way that works is that we set these targets and we say we will live up to them. If we do not live up to them, we pay a penalty on the bond, which basically means that the investors get a penalty payment from us if we don’t meet the targets,” Schultz added.

Charles Portier, portfolio manager at the green-focused fund manager Mirova
“I am not sure these sustainability-linked bonds have any place in environmental-focused funds.” “We couldn’t buy this bond. It does not fit in our fund.” 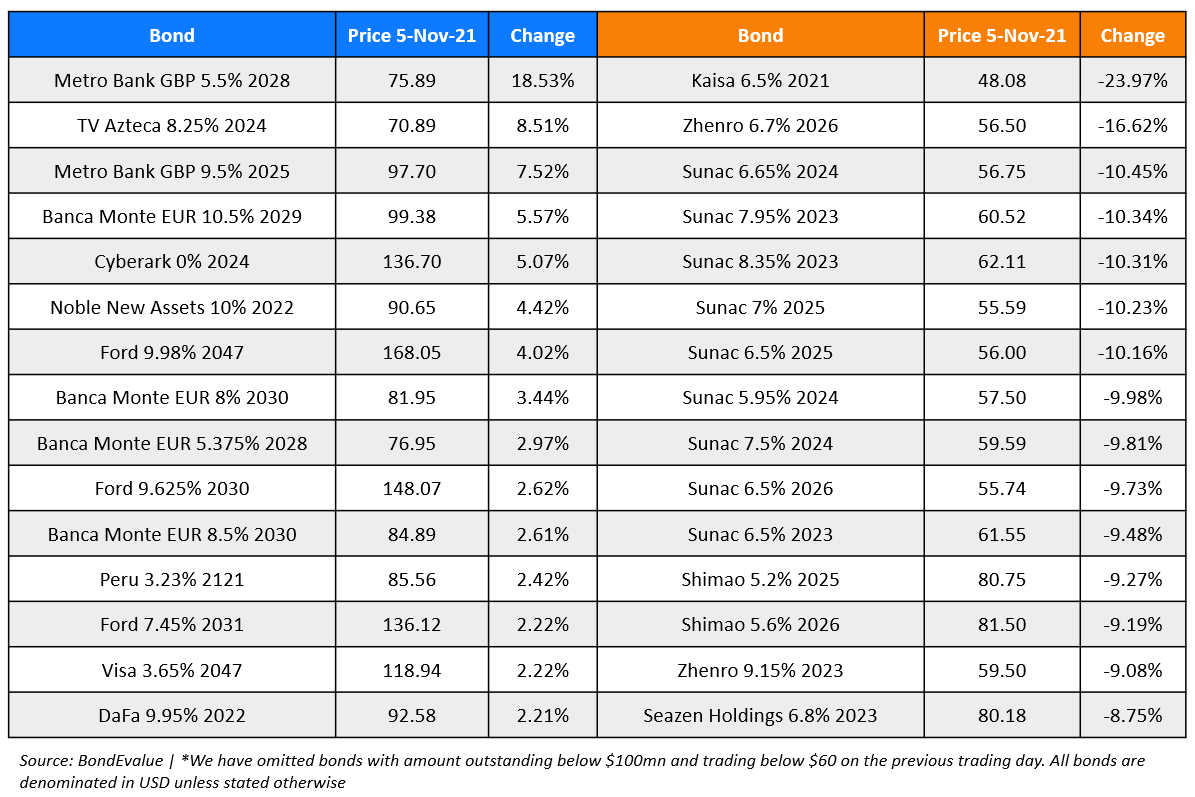