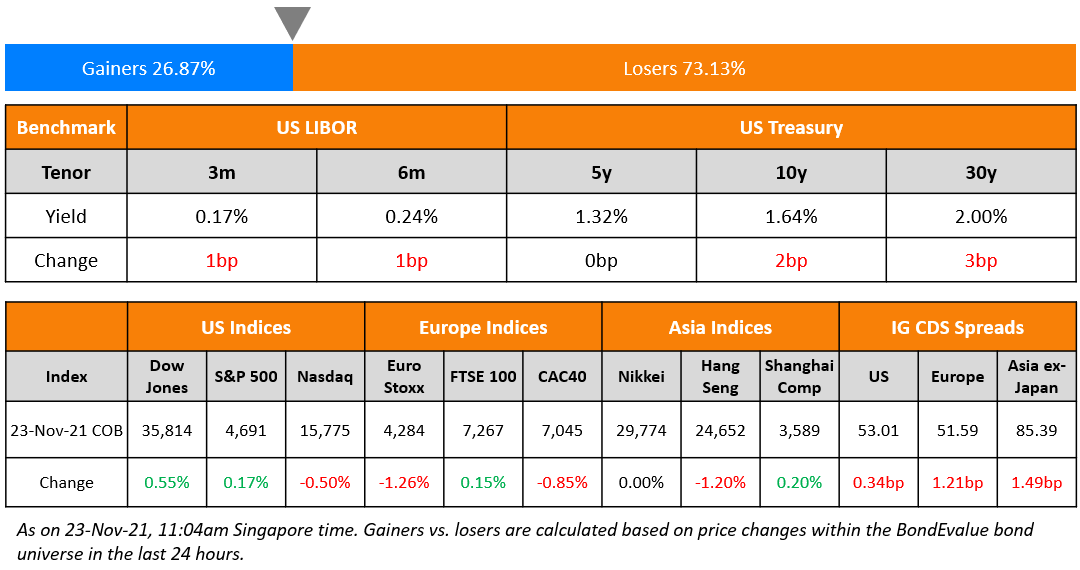 US equities ended mixed with the S&P up 0.2% while Nasdaq was down 0.5%. Sectoral gains were led by Energy and Financials, up 3% and 1.6% respectively while losses were led by Consumer Discretionary and Communication Services, down 0.4-0.6%. US 10Y Treasury yields inched 2bp higher to 1.64%. European markets were trading mixed with the DAX and CAC down 1.1% and 0.9% while FTSE was up 0.2%. Brazil’s Bovespa ended 1.5% higher. In the Middle East, UAE’s ADX and Saudi TASI were up 0.8% each. Asian markets have opened broadly lower – Shanghai, HSI and Nikkei were down 0.1%, 0.2% and 1.1% respectively, while STI was up 0.1%. US IG CDS spreads widened 0.3bp and HY CDS spreads were 0.1bp wider. EU Main CDS spreads were 1.2bp wider and Crossover CDS spreads were 6.6bp wider. Asia ex-Japan CDS spreads widened 1.5bp.

German Flash PMIs for November came stronger with Manufacturing and Services at 57.6 and 53.4, beating forecasts of 56.9 and 51.5 respectively. Eurozone Flash PMIs also came in higher with Manufacturing and Services at 58.6 and 55.8, well above forecasts of 57.3 and 53.2. Singapore’s GDP grew at 7.1% YoY in Q3 and is expected to grow at ~7% in 2021 and 3-5% next year, the Ministry of Trade and Industry (MTI) said. Singapore’s core inflation rose 1.5% in October, its biggest rise in nearly 3 years. Headline inflation jumped to 3.2% in October from 2.5% in the prior month. Food, airfares, private transport and accommodation picked up leading to the higher inflation print.

SocGen raised €1.5bn via a 5Y green bond at a yield of -0.115%, 5bp inside the initial guidance of MS+2bp area. The bonds have expected ratings of Aaa/AAA (Moody’s/Fitch). SocGen intends to use an amount equivalent to the net proceeds to finance and/or refinance, in part or in full, eligible activities of the “Green buildings” category as defined in its Sustainable and Positive Impact Bond Framework.

BNP Paribas raised €1bn via a 6.5NC5.5 green bond at a yield of 0.619%, 17bp inside initial guidance of MS+85bp. The bonds have expected ratings of Baa1/A-/A+. Proceeds will be allocated or reallocated from time to time to the financing and/or refinancing, in whole or in part, of Eligible Green Assets as defined in the BNP Paribas’ Green Bond Framework. The bonds are callable only once on 30 May 2027, and if not called, the coupon will reset to the prevailing 3-month Euribor + 68bp.

Temasek raised S$250mn for the retail tranche of its 5Y bond, bringing the total size of the issuance to S$500mn, up from its initial target of S$350mn. The 5Y bond was priced last week at a yield of 1.8%, 6bp inside initial guidance of 1.86% area. Retail investors will receive S$250mn, up from the planned S$100mn, while institutional, accredited and other specified investors will receive S$250mn. The retail tranche received orders over S$649.5mn, 2.6x issue size. The bonds have expected ratings of Aaa/AAA (Moody’s/S&P), and proceeds will be used to support Temasek’s and its subsidiaries’ ordinary course of business. The bonds are issued by Temasek Financial IV and guaranteed by Temasek Holdings, and are currently trading at 100.14, yielding 1.77%.

Shandong Energy Group raised $500mn via a 3Y bond at a yield of 2.9%, 40bp inside the initial guidance of 3.3% area. The bonds have expected ratings of Ba1 (Moody’s), and received orders over $1.55bn, 3.1x issue size. Proceeds will be used for general corporate purposes, including debt repayment and working capital. The bonds are issued by wholly owned subsidiary Yankuang Group (Cayman) and guaranteed by Shandong Energy Group. The guarantor is wholly owned by the Shandong government via the Shandong SASAC, Shandong Guohui and Shandong Caixin and is the biggest coal producer in the province.

Chengdu Communications Investment Group raised $600mn via a 3Y bond at a yield of 2.2%, 50bp inside initial guidance of 2.7% area. The bonds have expected ratings of BBB+ (Fitch), and received orders over $2.2bn, 3.7x issue size. Proceeds will be used for offshore debt refinancing and working capital. The issuer is wholly owned by the Chengdu SASAC in China, and is responsible for transportation infrastructure projects such as expressways, railway lines, aviation and parking lots in Chengdu city, Sichuan province.

These are bonds denominated in offshore Renminbi (CNH) and issued outside China (mostly in Hong Kong). The first dim sum bond was issued in 2007 by China Development Bank – a 2Y offshore RMB bond in Hong Kong, with a 3% coupon and size of RMB 5bn ($750mn). These instruments get their name from dim sum, a popular delicacy in Hong Kong. Dim sum bonds are typically issued by issuers that have a need for Renminbi but do not want to go through regulatory approvals as dim sum issuance are not subject to regulatory approval from mainland China or Hong Kong, provided that they are sold to professional investors. As of 2019, most dim sum bonds were issued by financial corporations, followed by the real estate and industrials sectors while most dim sum issuances were from China.

“For investors, Erdogan’s comments mean one thing: there will be no one there for them when inflation continues to take a toll on their assets… Erdogan’s comments can largely be seen as abandonment of caution and a sign to markets that the easing cycle is unlikely to end anytime soon”.

Tim Ash, a strategist at BlueBay Asset Management in London

“It feels like he has put all his eggs in the rate cut basket, and someone has supplied him with the narrative… But there is no floor for how low the lira can fall.”

“At a minimum, the prospects for an accelerated tapering will be on the table in December with the probability tied to the upcoming NFP and CPI releases”

“The European Central Bank is continuously pointing out that the inflation rebound in recent months is of a transitory nature… However, we have also seen how in recent months these supply factors are becoming more structural, more permanent.”

“We will keep under review what I would call the boundary between giving the kind of signal that we gave three weeks ago – which essentially said ‘here’s our view of the world … this is what follows from it… There is an alternative view, which is we should go meeting by meeting and not give any guidance. That is not off the table by any means. That is very well trodden ground by the MPC and I could imagine us going back to it.” 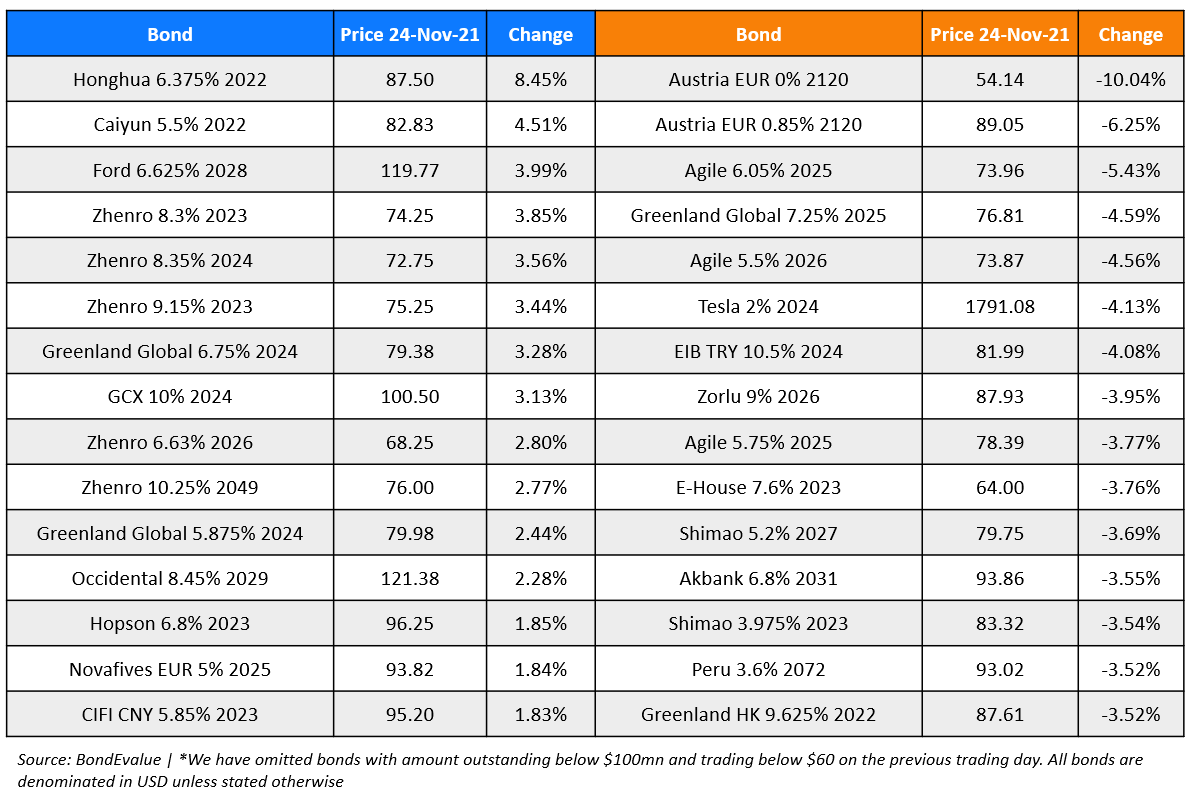