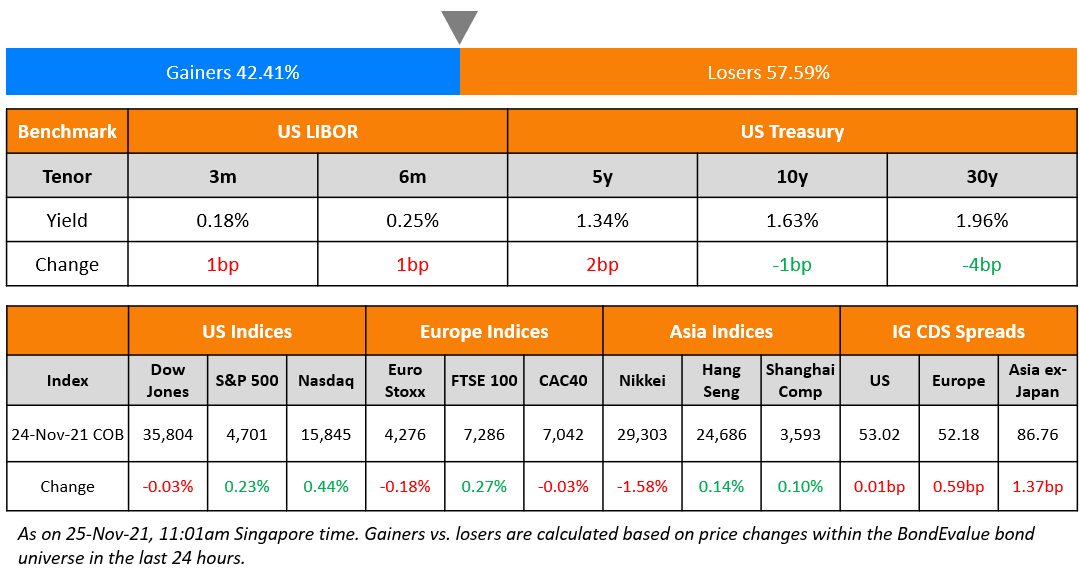 US equities ended slightly higher with the S&P up 0.2% and Nasdaq up 0.4%. Sectoral gains were led by Real Estate and Energy, up over 1% while losses were led by Materials, down 0.7%. US 10Y Treasury yields inched 2bp higher to 1.64%. European markets were mixed with the DAX down 0.4%, CAC flat and FTSE up 0.3%. Brazil’s Bovespa ended 0.8% higher. In the Middle East, UAE’s ADX and Saudi TASI were up 0.8% and 1% respectively. Asian markets have opened broadly lower – Shanghai, HSI and STI were down ~0.2% each while Nikkei was up 0.7%. US IG CDS spreads were flat and HY CDS spreads were 0.1bp wider. EU Main CDS spreads were 0.6bp wider and Crossover CDS spreads were 2.3bp wider. Asia ex-Japan CDS spreads widened 1.5bp.

US Q3 preliminary GDP came at 2.1%, slightly below expectations of 2.2%. US initial jobless claims for the prior week came at 199k, the lowest since 1969. 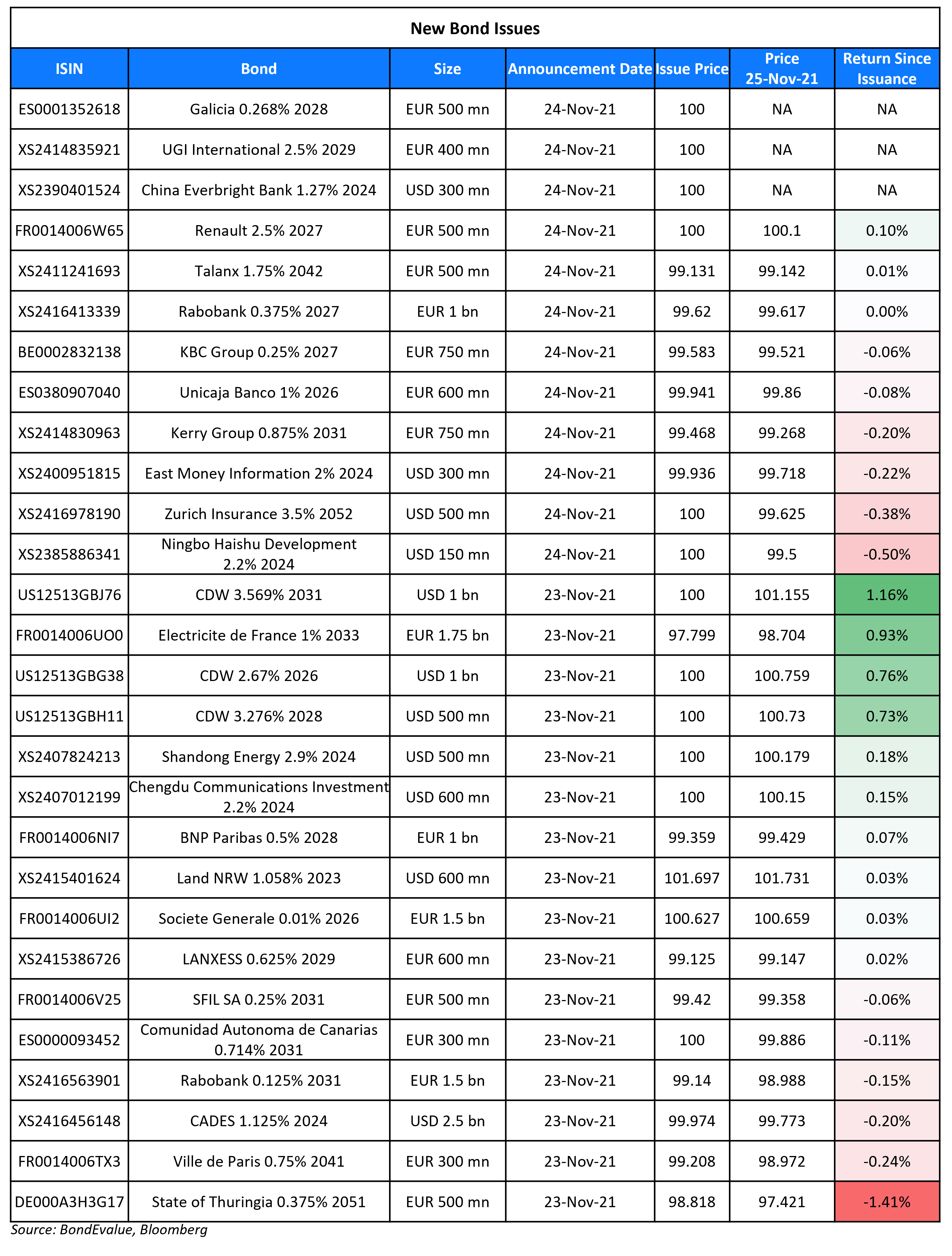 Keppel Infrastructure Trust raised S$200mn via a 5Y bond at a yield of 3%, 12.5bp inside initial guidance of 3.125% area. The bonds are unrated. Proceeds will be used to refinance debt and fund working capital and/or capital expenditure needs, acquisitions, investments or asset enhancement projects. The bonds are issued by trustee-manager Keppel Infrastructure Fund Management. Singapore accounted for 99%, while the remaining 1% went to others. Fund managers, insurance companies and corporates bought 37%, private banks 34% and banks 29%.

China Everbright Bank raised $300mn via a 3Y bond at a yield of 1.27%, 37bp inside initial guidance of T+70bp area. The bonds have expected ratings of BBB+/BBB (S&P/Fitch). Proceeds will be used for general funding purposes. China Everbright Bank is a joint-stock commercial bank and the flagship subsidiary of China Everbright Group, which is directly and indirectly wholly owned by the Chinese government.  The new bonds are priced 6bp wider to its existing 0.826% 2024s that yield 1.21%.

East Money Information raised $300mn via a 3Y debut bond at a yield of 2.022%, 50bp inside initial guidance of T+160bp area. The bonds have expected ratings of BBB– (S&P). Proceeds will be used for the development of the group’s overseas business. The bonds are issued by indirect wholly owned subsidiary Hafoo Co and guaranteed by East Money Information. The guarantor is an online wealth management service provider in Shenzhen, China.

Ningbo Haishu Development and Construction raised $150mn via a 3Y bond at a yield of 2.2%, 50bp inside initial guidance of 2.7% area. The bonds have expected ratings of BBB (Fitch), and received orders over $670mn, 4.5x issue size. Proceeds will be used for project construction and general working capital. The bonds are issued by indirect wholly owned subsidiary Heng Yuan International and guaranteed by Ningbo Haishu Development and Construction.

Revolution bonds are bonds issued where the funds will be used for a revolution. Myanmar plans to raise up to $1bn from a sale of such bonds to fund its revolution efforts to topple the military regime. The bonds will be sold in phases, with the first tranche expected to raise $200mn mostly from overseas Myanmar citizens. The 2Y notes, offered in four denominations of $100, $500, $1,000 and $5,000 will carry no interest.

“Various participants noted that the Committee should be prepared to adjust the pace of asset purchases and raise the target range for the federal funds rate sooner than participants currently anticipated if inflation continued to run higher”.

“Even before the strong October data, which printed after the meeting, there was already a constituency in favor of speeding up the taper process if inflation continued to run hot”

“With the latest data suggesting that fourth-quarter GDP growth could be as strong as 6.5% annualized, we expect more officials to jump on that bandwagon… The FOMC has clearly woken up to the realization that, even if it falls back somewhat, inflation is likely to remain above target for some considerable time.”

On Brazil’s Central Bank Cautioning Against Hiking Rates Too Fast

“The objective is to not make any of those mistake… In a country with a vivid memory of inflation, it’s very important to make sure deanchoring of inflation expectations does not start a repricing in the economy such as to create higher inertia that could be avoided by being more proactive.”

On US bond bulls and bears regarding inflation

“What matters are not this week’s [gross domestic product] print or the next [consumer price index] print, or the next Fed meeting, the fundamentals are what drives the longer run.”

“Overall policy remains very expansionary. So these things together, make me think that inflation is likely to stay around for quite a while”

“It’s not clear to me that tapering will necessarily mean a big increase in yields, not least because the net supply in a lot of places isn’t actually going to be larger than it has been over the last couple of years despite the fact that purchases are going to stop. We’re not facing some kind of cliff edge” 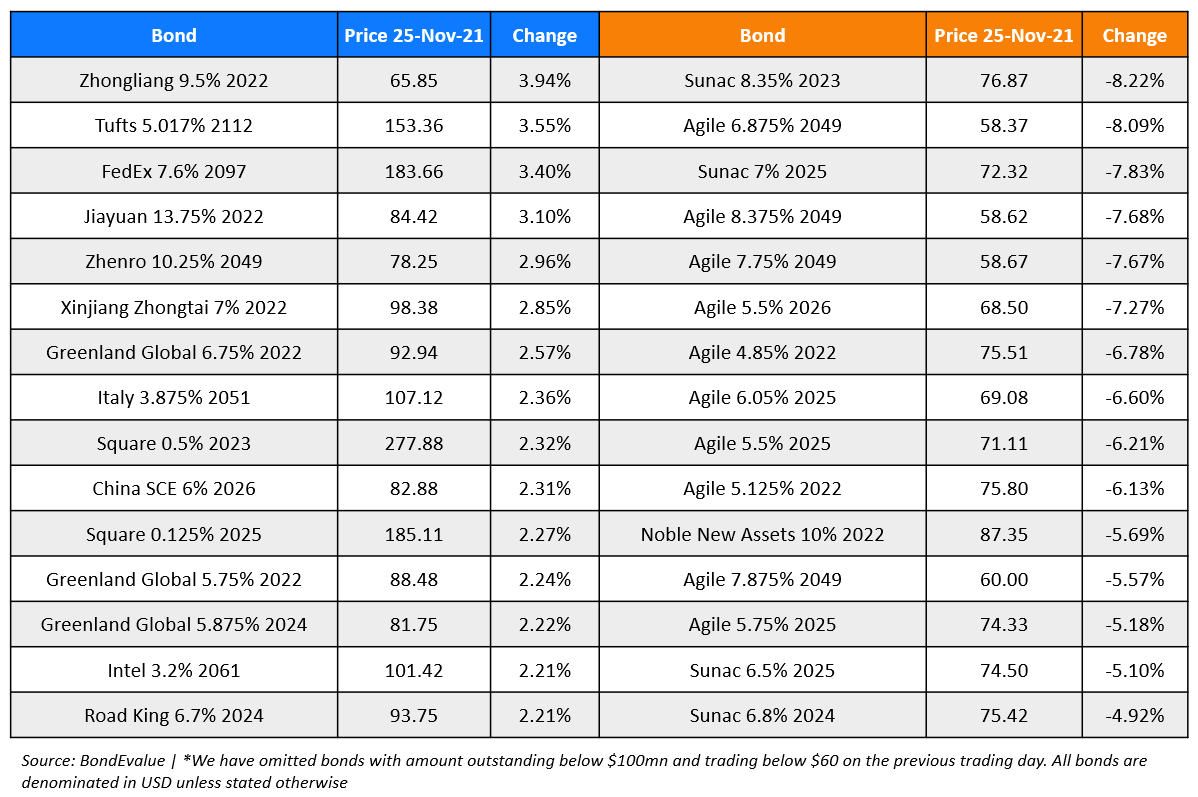