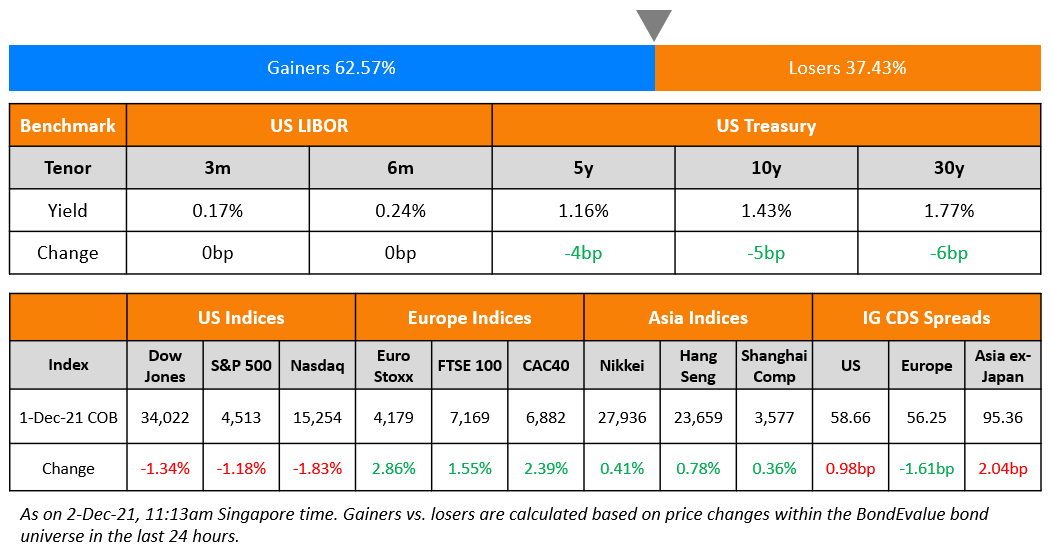 US equity markets again slipped lower with the S&P and Nasdaq close 1.2% and 1.8% lower respectively. Barring Utilities which was 0.2% higher, all other sectors ended in the red led by Communication Services falling 2%. US 10Y Treasury yields moved 5bp lower to 1.43% as risk-off sentiment hit markets in the US session. European markets were also lower with the DAX, CAC and FTSE down 2.5%, 2.4% and 1.6% respectively. Brazil’s Bovespa ended 1.1% lower. In the Middle East, UAE’s ADX was closed while Saudi TASI was up 0.8%. Asian markets have opened mixed – Shanghai was flat, HSI was up 0.2% while STI and Nikkei were down 0.2% each. US IG CDS spreads widened 1bp and HY CDS spreads widened 5.6bp. EU Main CDS spreads were 1.6bp wider and Crossover CDS spreads were 9.1bp wider. Asia ex-Japan CDS spreads widened 2bp.

Bank of America raised $2bn via a 4NC3 sustainability bond at a yield of 1.53%, 18bp inside initial guidance of T+85bp area. The bonds have expected ratings of A2/A-. Proceeds will be used for eligible Equality Progress Social Assets and Eligible Green Assets as defined in BofA’s preliminary pricing supplement. The bonds are first callable on 6 December 2024, and if not called, the coupon will reset to the prevailing SOFR+65bp.

New Development Bank raised $500mn via a 3Y FRN at a yield of 0.33%, 2bp inside initial guidance of SOFR+30bp area. The bonds have expected ratings of AA+/AA+ (S&P/Fitch), and received orders over $580mn, 1.2x issue size. The net proceeds will be used for financing sustainable development activities and providing emergency support loans to the Issuer’s member countries. Such emergency support loans will be used for enabling economic recovery in the issuer’s member countries, including creation of employment, labor support to maintain employment, credit support to Small and Medium Enterprises, etc., in response to the adverse economic impact of COVID-19 pandemic.

CES Treasury raised S$120mn via a 3Y bond at a yield of 6.5%. The proceeds from the Singapore-listed trade will be used for general corporate purposes, including for refinancing and working capital. According to the initial exchange offer, investors will receive an additional amount in cash equivalent to 0.25% of the principal amount of S$250,000 if they swapped the existing notes for the new 2024s.

Loan loss provision are essentially amounts that are required to be set aside against impairments on loans. These ‘impaired’ loans are bucketed into different categories based on how long payments are overdue (for example, sub-standard, doubtful, defaults) and different levels of provisioning are required against these types of loans. Hence if a bank overprovisions during a certain period and losses turn out to be less than expected, the bank may release some of the provisioning (impairment release), helping its income statement whereas an increase in provisioning (impairment charge/addition) may hurt its income statement. Nowadays, banks also provide for expected credit losses (ECL) which are also organized into different tiers.

“We’ve seen duration and government bonds coming back into fashion as a hedge — they’ve actually been working over the last few weeks… That’s something we’ve been adding back into portfolios over the last few months… The omicron developments still justify a holding pattern for markets in terms of risk sentiment. It’s a setback, it’s certainly not setting us back to square one given all the progress on vaccines, anti-virals, and the fact that many governments are not going to back to lockdowns. At the same time we have to expect some kind of serious vaccine escape from this variant. There’s uncertainty around that. And that is going to delay the recovery over the winter.”

“You sell government bonds and you buy credit… This is an opportunity to get rid of any remaining government bonds you have, and then go back into the credit markets, go back into investment grade and high yield. You can do it in U.S. and Europe. Those are the things you are buying on sale… There’s been a tremendous repricing. You’ve had a flattening of the yield curve. There’s a lot of concern that the Fed is going to move too quickly for the market and will lead to recession. That’s nonsense. They are miles away from anything that looks normal… They should announce that they’re going to double the pace of tapering. So they should be out of the market by March, and then we should see rate hikes pretty soon after that. So they’re going to start that journey to normal.”

“There were wide-ranging input cost increases stemming from strong demand for raw materials, logistical challenges, and labor-market tightness… Prices rose at a moderate to robust pace, with price hikes widespread across sectors of the economy… The outlook for overall activity remained positive in most Districts, but some noted uncertainty about when supply chain and labor supply challenges would ease”.

“Making the taper faster is definitely buying insurance and optionality so that if inflation doesn’t move back down significantly next year we’re in a position to be able hike if we have to… Right now, with the inflation data the way it is and with the job market as strong as it is, I do think that we have to be in a position that if we need to raise rates a couple of times next year we’re able to do that”

On Erdogan’s Plan Backfires With ‘Desperation’ in Turkish Lira

“If a cheaper lira were a boon for exports, I’d think exports would have been booming for years now”

“The economy needs moderate and stable inflation, and both micro- and macroeconomic reforms that usually take a decade or two” 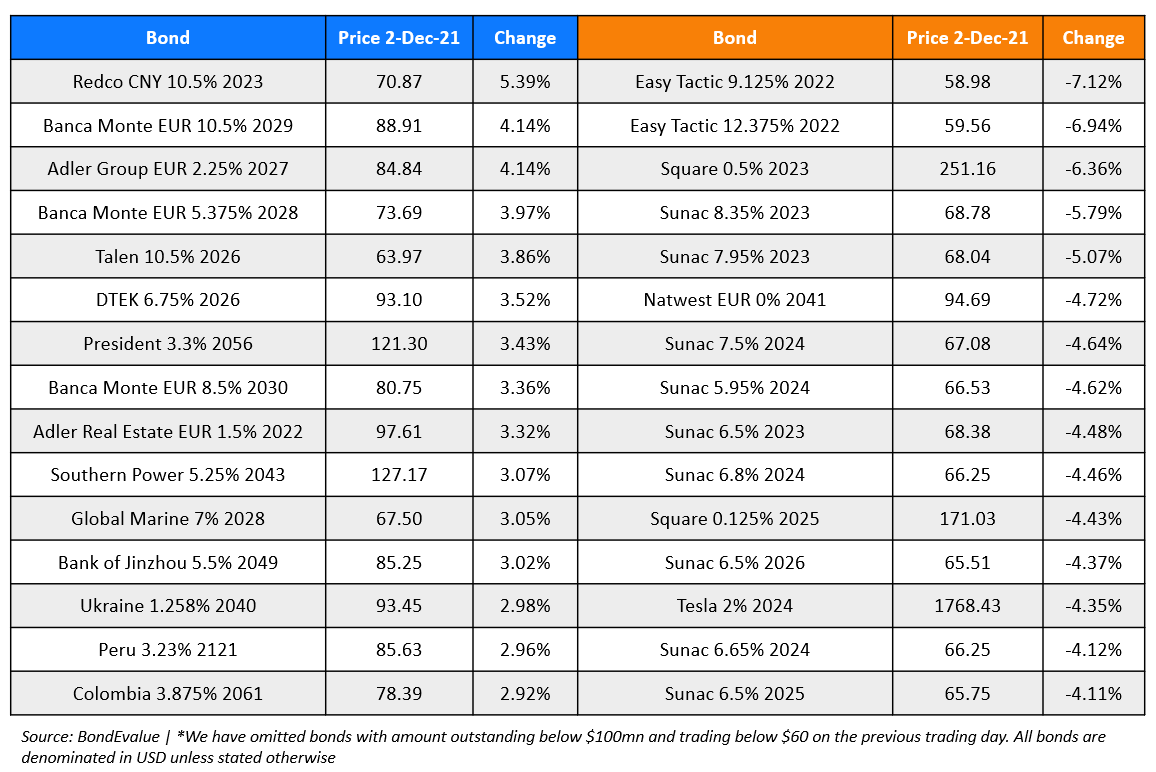