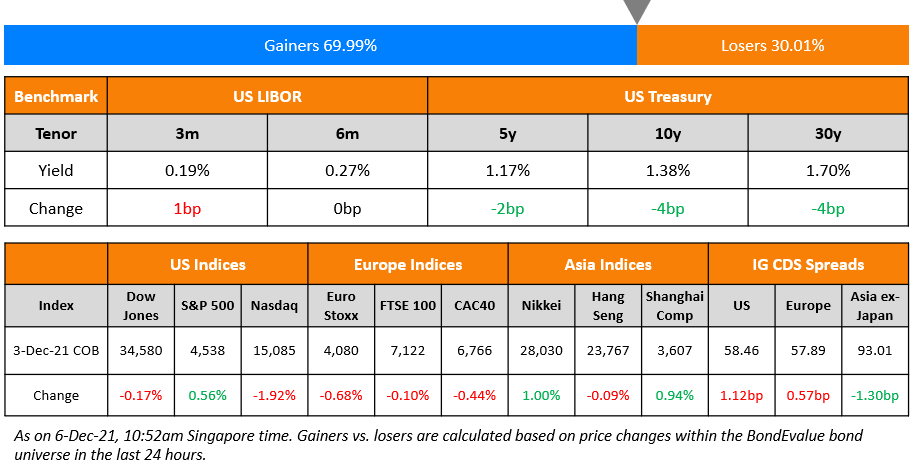 US equity markets dropped on Friday with the S&P and Nasdaq closing 0.8% and 1.9% lower respectively as Omicron jitters hit markets along with softer payrolls data. Most sectors were in the red led by Consumer Discretionary and IT, down over 1.7% each. US 10Y Treasury yields moved 4bp lower to 1.38% after falling over 10bp intra-day on Friday due to the risk-off sentiment and softer NFP data. European markets were lower too with the DAX, CAC and FTSE down 0.6%, 0.4% and 0.1% respectively. Brazil’s Bovespa was up 0.6%. In the Middle East, UAE’s ADX was closed while Saudi TASI was up 2.4% on Sunday. Asian markets have opened mixed – Shanghai and STI were up 0.4% and 0.8% while HSI and Nikkei were down 1.4% and 0.6% respectively. US IG CDS spreads widened 1.1bp and HY CDS spreads widened 7bp. EU Main CDS spreads were 0.6bp wider and Crossover CDS spreads were 2.4bp wider. Asia ex-Japan CDS spreads tightened 1.3bp.

Regarding November economic data, US NFP was softer than expected at 210k vs. forecasts of 550k while the Unemployment Rate came in lower at 4.2% vs. forecasts of 4.5%. Average Hourly Earnings came in softer at 0.3% MoM and 4.8% YoY vs. forecasts of 0.4% and 5% respectively, possibly indicating some slack in the labor market. ISM Non-Manufacturing for November came at a record 69.1 vs. forecasts of 65. Italy was upgraded to BBB by Fitch. Turkey’s inflation soared to 21.31% YoY, to a 3Y high vs. forecasts of 20.7%. 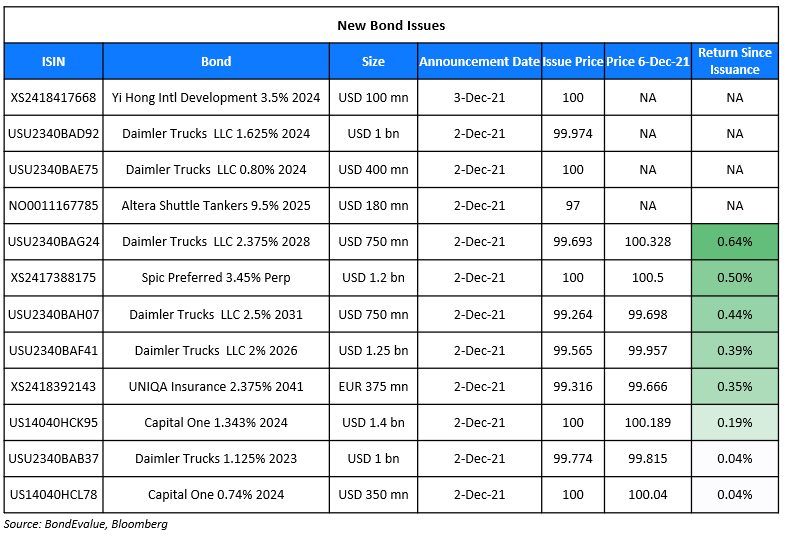 Risk-off is an indication of global market sentiment wherein investors switch out from risky assets (i.e. risk-off) into safer assets on the back of increased uncertainty. This can be due to geopolitical risk, poor economic data or a crisis. The most noteworthy risk-off event this year was in late March 2020, when fears about the coronavirus pandemic pushed financial markets lower across the board. Most typically, during a risk-off environment, US Treasuries and gold tend to perform better as they are considered safe haven assets. On the other hand, risk-on indicates positive investor sentiment wherein investors switch into risky assets (i.e. risk-on) from safer assets on improved prospects of economic growth. This can be due to improved political environment, strong economic data, strong corporate earnings, or a recovery from a crisis.

“The danger now is that we get too much inflation… it’s time for the (Fed) to react at upcoming meetings… The inflation numbers are high enough that I think (ending the taper by March) would really help us to create the optionality to do more if we had to, if inflation doesn’t dissipate as expected in the next couple of months”

“We think that it is clear that QE has overstayed its welcome… the next few months will be fertile with information on Omicron risks, supply and demand influences, a potentially moderately slowing demand for goods and services”

“Our view is that inflation pressure will ease during the course of next year. In the near term, hotter inflation numbers will put pressure on the Fed to move faster.”

“We have been short breakevens and they look a little more fairly priced. We expect CPI peaks by the end of the first quarter next year, and long-dated breakevens had reflected a view of higher inflation for longer than that.”

“When the conditions of our forward guidance are satisfied, we will not hesitate to act…A hump eventually declines (regarding inflation), and this is what we project for 2022. We believe that we are now at the high level of the hump and that it will start declining”

Wei He, an analyst at Gavekal Dragonomics

“The positive factors such as money that hasn’t been spent this year will be countered by the negative impact from land sales… Therefore I do not expect a significant acceleration in infrastructure spending to materialize next year.”

“There is some caution starting to seep in on the part of investors towards credit, given the tight spreads, omicron concerns, and the shift in the Fed’s focus from the labor market to inflation… You should see defensives perk up — it’s no surprise staples and utilities are outperforming.” 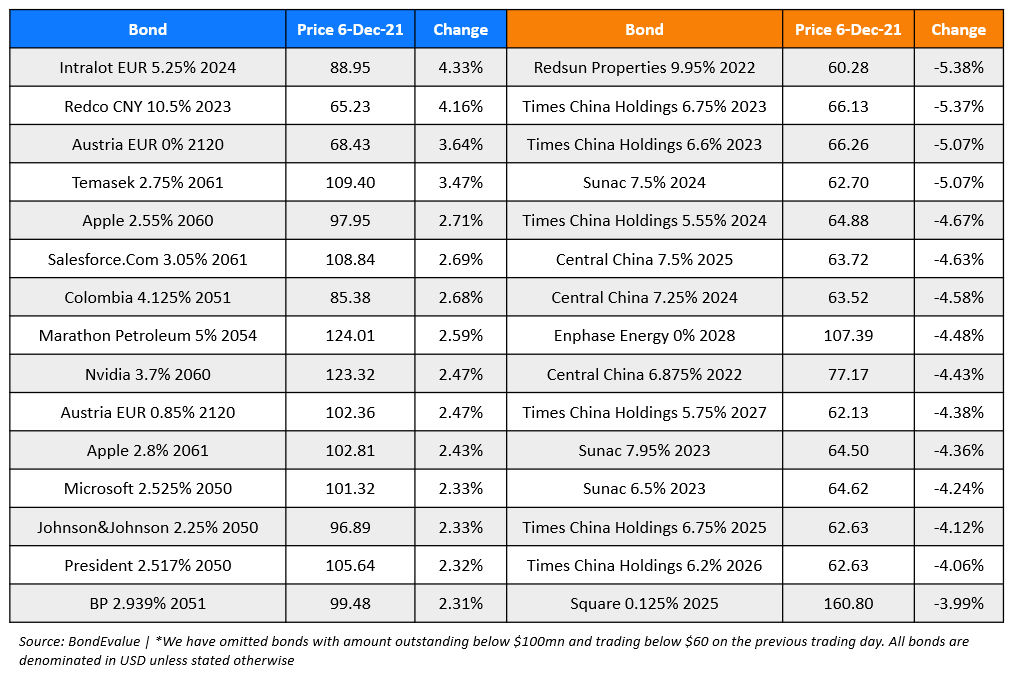