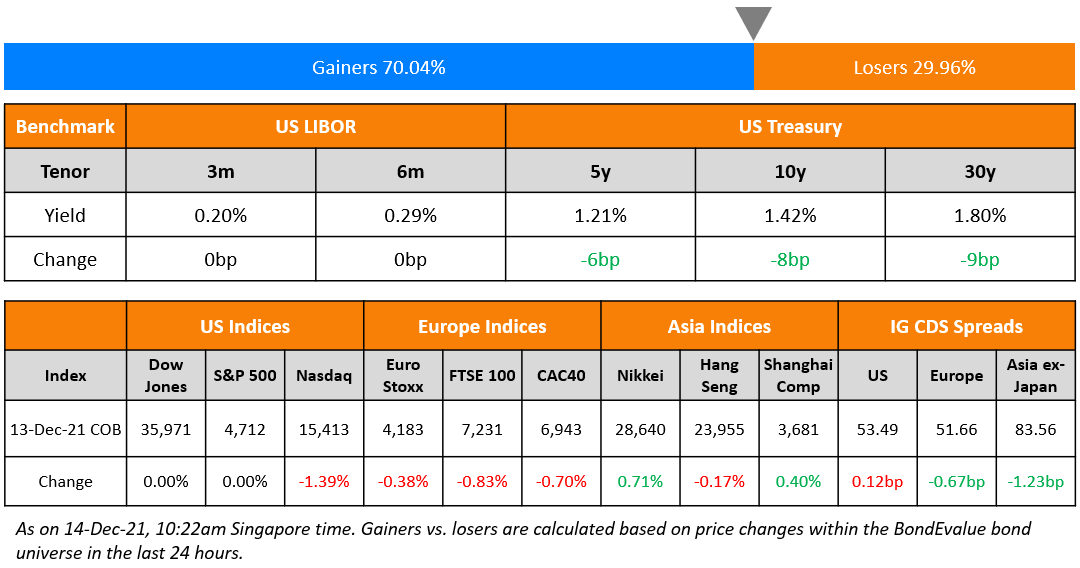 US equity market volatility continues with the S&P and Nasdaq closing 0.9% and 1.4% lower. Most sectors were in the red led by Energy and Consumer Discretionary, down over 2.5% each. US 10Y Treasury yields moved 8bp lower to 1.42%. European markets were mostly lower with the DAX ending flat while the CAC and FTSE were down 0.7% and 0.8% respectively. Brazil’s Bovespa was down 0.4%. In the Middle East, UAE’s ADX was down 0.4% while Saudi TASI was up 0.5%. Asian markets have opened mostly lower with the Shanghai, HSI and Nikkei down 0.9%, 1.2% and 0.5% respectively while the STI was up 0.2%. US IG CDS spreads widened 0.1bp while HY CDS spreads widened 2.5bp. EU Main CDS spreads were 0.7bp tighter and Crossover CDS spreads were 2.5bp tighter. Asia ex-Japan CDS spreads tightened 1.2bp.

CCB Macau raised $500mn via a 3Y green bond at a yield of 0.552%, 30bp inside initial guidance of SOFR+80bp area. The bonds have expected ratings of A1 (Moody’s), and received orders over $800mn, 1.6x issue size. Proceeds will be used to fund and refinance loans to customers as well as activities that fall under the eligible projects in its green bond framework. CECEP Hundred Technical Service Beijing provided the reasonable assurance attestation report that the framework is aligned with the green bond principles set by the ICMA, the International Platform on Sustainable Finance and the Chinese Society of Technology Economics.

‘Rescue debt’ refers to debt provided to a company as part of a rescue package when the company is in financial stress. A prominent example is that of WeWork’s $550mn debt provided by SoftBank in 2019 as part of an overall $2.2bn rescue package. At the time, WeWork faced a cash crunch and required financing. Recently, SoftBank sold $550mn of the debt it provided WeWork.

“It’s going to be the biggest hawkish shift in the history of the dot plot.”

“The tapering process has become a straightjacket, preventing the Fed from responding to the higher than expected level and persistence of inflation.” “Therefore, they are likely to double the pace of tapering to create the option to hike as early as in March.”

“The forecast will show an increase in inflation, drop in unemployment and massive shift in rate hikes to 2022.” “This will signal the first time since the 1980s that the Fed actually admits it is chasing instead instead of preempting what at times was a non-existent inflation. That is a major break from the past.”

On Saudi Arabia’s expectation of a budget surplus for 2022

“The surpluses will be used to increase government reserves, to meet the coronavirus pandemic needs, strengthen the kingdom’s financial position, and raise its capabilities to face global shocks and crises.”

“We are totally now decoupling the government expenditure from the revenue.” “We are telling our people and the private sector or economy at large that you can plan with predictability. Budget ceilings are going to continue in a stable way regardless of how the oil price or revenues are going to happen.”

On the lowest returns for bond traders since early 1980s

“People have accepted negative real returns for a long period of time.” “Despite the fact it may seem peculiar, maybe this is something we have to adjust to as the new normal. The long-term secular drivers are still in place, and they are still going to be powerful.”

“You many not want to own bonds because they are negative-yielding security.”  “But that phenomenon may exist for a long time because of this fundamental disequilibrium between saving and investment, or spending and saving.”

“There’s not impetus for the Fed to slam on the breaks — and they know when they do so they cause recessions.” “They have repressed interest rates, they are going to keep repressing interest rates.”

“We haven’t been excited about negative real rates.” “This has become less of a free market. We are not taking a lot of duration risks at all.”

“The negative outlook reflects what we view to be rising risks to Turkey’s externally leveraged economy over the next 12 months from extreme currency volatility and rising inflation, amid mixed policy signals.”

According to Goldman Sachs

“With Pemex, for example, we are constantly or periodically lowering taxes so they have more funds.” “And we can lower them more.” “We’re no longer following neoliberal policies, which treated Pemex as if it were any other company.” “Now Pemex is a protected company, supported and backed by the government.”

On the view that the China property crackdown will increase appetite for funds – Xiaofeng Zhong, chairman of Amundi’s business in the Greater China area

“We are going to see money flowing from real estate investments to capital markets investments.” “The government is encouraging funds flowing into the financial market.” 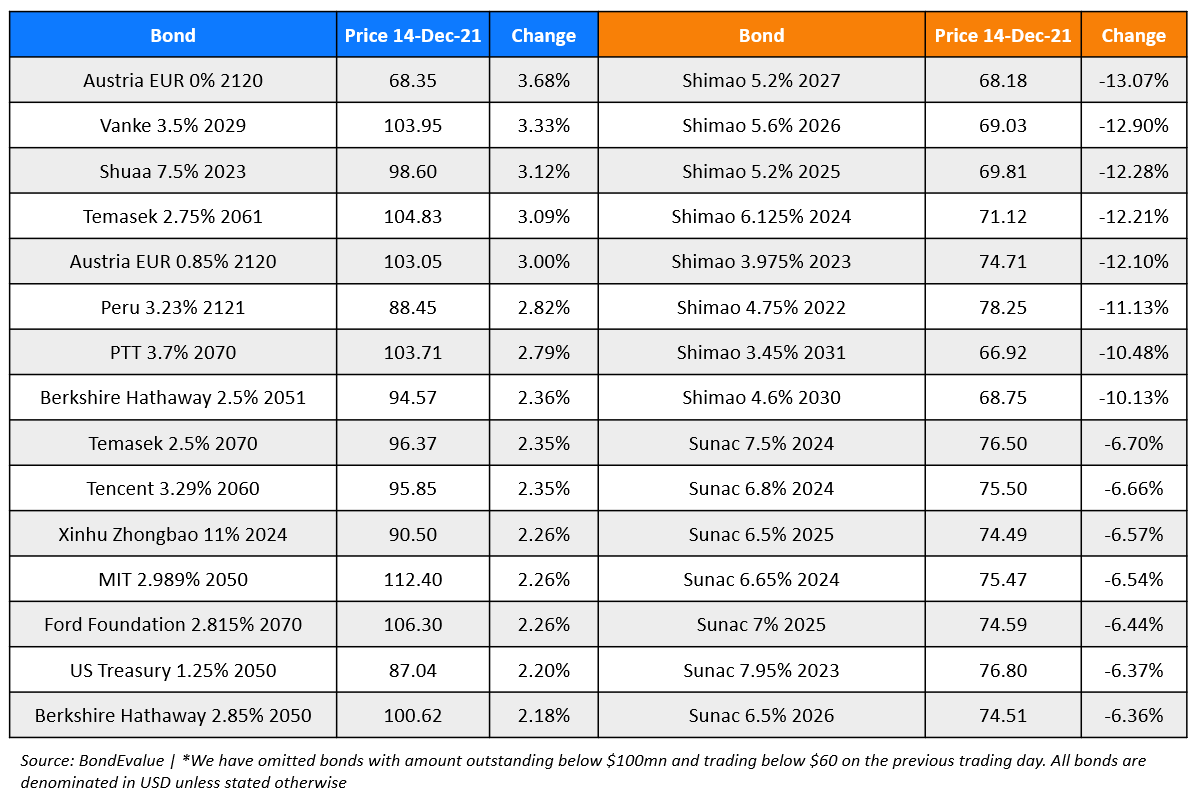