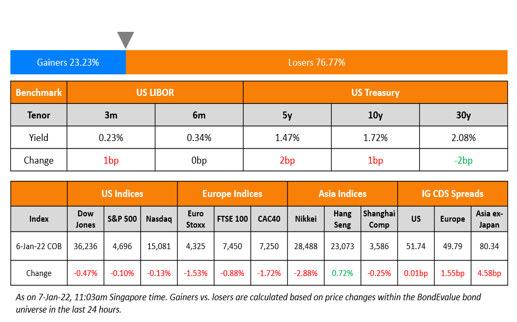 US ISM Non-Manufacturing PMI came at 62 vs. 66.9 forecasted. The sub-components were mostly softer across the board with the new orders index down to 61.5 from 69.7. US jobless claims came at 207k vs. 195k forecasted. 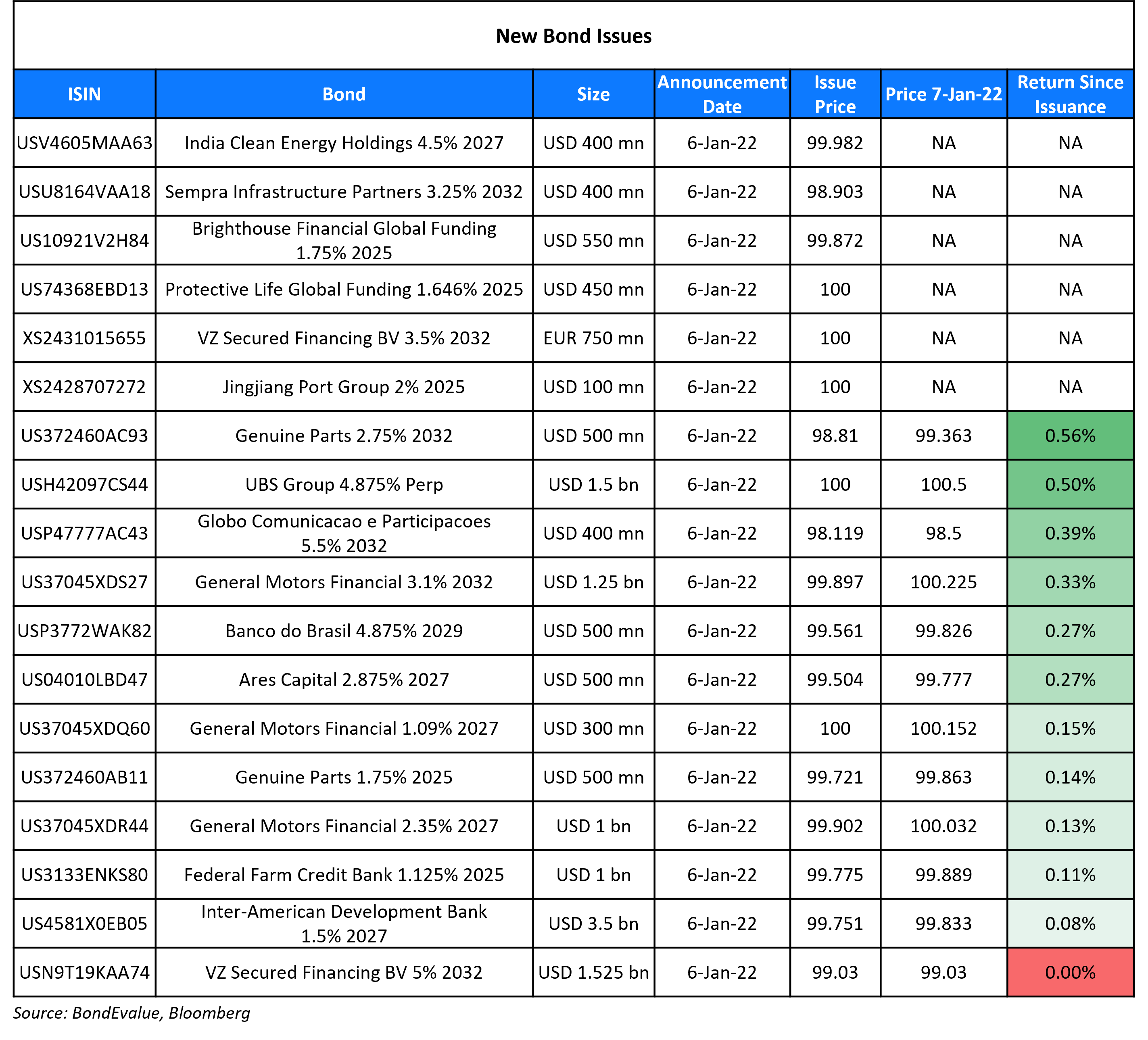 UBS Group raised $1.5bn via a PerpNC5 AT1 bond at a yield of 4.875%, 25bp inside the initial guidance of 5.125% area. The bonds have expected ratings of BB/BBB (S&P/Fitch). The coupon is fixed until the first call date of February 12, 2027 and the bonds are callable at every interest coupon payment date thereafter at par. If not redeemed, coupon resets every 5Y at 5Y UST plus a margin of 3.404%.

India Clean Energy Holdings / ReNew Power raised $400mn via a 5.25NC3.5 green bond at a yield of 4.5%, 30bp inside initial guidance of 4.8% area. The bonds have expected ratings of Ba3/BB– (Moody’s/Fitch), and received orders of over $900m, 2.25x issue size. Fund managers took 91%, insurers, pension funds and sovereign wealth funds 8% and banks and private banks 1%. Asia took 39%, EMEA 21% and the US/Canada 40%. Proceeds from the notes will be primarily used by the issuer to subscribe to onshore USD-denominated notes to be issued by ReNew Power Private Limited (RPPL), a wholly owned subsidiary of ReNew Energy Global and a sister company of the issuer. The onshore notes in turn will be used by RPPL to refinance existing debt and/or capital expenditure on eligible green projects. India Clean Energy Holdings is a wholly owned subsidiary of Nasdaq-listed ReNew Energy Global PLC. The notes have been certified as green bonds by the Climate Bonds Initiative and verified by KPMG.

Banco do Brasil raised $500mn via a 7Y social bond at a yield of 4.95%, ~5bp inside initial guidance of low 5%. The bonds have expected ratings of Ba2/BB- (Moody’s/Fitch). Proceeds will be used to finance or refinance existing or future eligible Social projects in accordance with the bank’s Sustainable Finance Framework.

General Motors raised $2.55bn via a three-tranche deal. It raised:

The bonds have expected ratings of Baa3/BBB. Proceeds will be used for general corporate purposes. The new 5Y fixed-rate bonds are priced at a new issue premium of 10bp to its existing 4.35% 2027s that yield 2.27%.

Greenwashing is a term used to describe corporate/government marketing practices that emphasize on its environmentally-friendly initiatives that are, in truth, vastly overstated. While this is not a new term, its relevance has increased over the past few years with the surge in green, social and sustainable bond issues, with several institutional investors and industry bodies questioning the intent and/or effectiveness of these bond issues. The term greenwashing was coined by environmentalist Jay Westerveld in 1986 and originates from his visit to the Beachcomber Resort in Fiji in 1983. He noticed that the resort had placed a note beside the towel stand that encouraged patrons to reuse towels to reduce ecological damage. However, looking at the ongoing construction of new bungalows and vast amounts of wastage at the resort, it was clear to Westerveld that the resort did not care much for the environment and were simply looking to reduce its expenses associated to towel cleaning.

Concerns of greenwashing have emerged on Airport Authority Hong Kong (AAHK’s) dollar bond priced yesterday. As part of its $4bn issuance, it issued a 1.75% green bond due 2027 where critics argued that the ESG angle was incompatible with AAHK’s expansion plans. Reclaim Finance, a climate change think tank, published a critical analysis of the AAHK issuance, noting that the expansion of the airport through its third runway project, will have massive environmental impacts, including an increase in carbon emissions.

“The FOMC could begin increasing the policy rate as early as the March meeting in order to be in a better position to control inflation.” “Subsequent rate increases during 2022 could be pulled forward or pushed back depending on inflation developments.” “It makes sense to get going sooner rather than later, so I think March would be a definite possibility, based on data that we have today,” he said. “It would make sense to go ahead and lift off and then if inflation moderates as much as hoped by some forecasters then we would be able to slow down or not raise as fast as we otherwise would in the second half of the year.” “My own view is that we could go ahead with balance-sheet runoff shortly after lifting off the policy rate.” “With the real economy strong but inflation well above target, U.S. monetary policy has shifted to more directly combat inflation pressure.”

According to Daly, shrinking the balance sheet is “a very different conversation than reducing our balance sheet.”

“EM currencies whose central banks haven’t started raising interest rates or their rates are still negative in real terms could be particularly vulnerable.”

Cristian Maggio, the head of portfolio strategy at TD Securities

“The adjustment will end eventually, and most emerging markets have already started hiking rates.” “I expect the market to find an equilibrium point and after the first one to two hikes from the Fed, we may see EM FX return to a stronger performance.”

On Mexican central bank signaling their concern over inflation, labor costs – according to the minutes of the Bank of Mexico monetary policy meeting

“The issuance of a green bond for such a devastating project might have been cleared for take-off, but the biodiversity and climate risks associated with the project speak for themselves.” “Sincere investors should stay clear of this bond, if their climate commitments mean anything at all.”

“While the authority’s green bond may have checked all the boxes under these green finance principles, it has little control over the emissions of its airline customers and business partners,” she said. 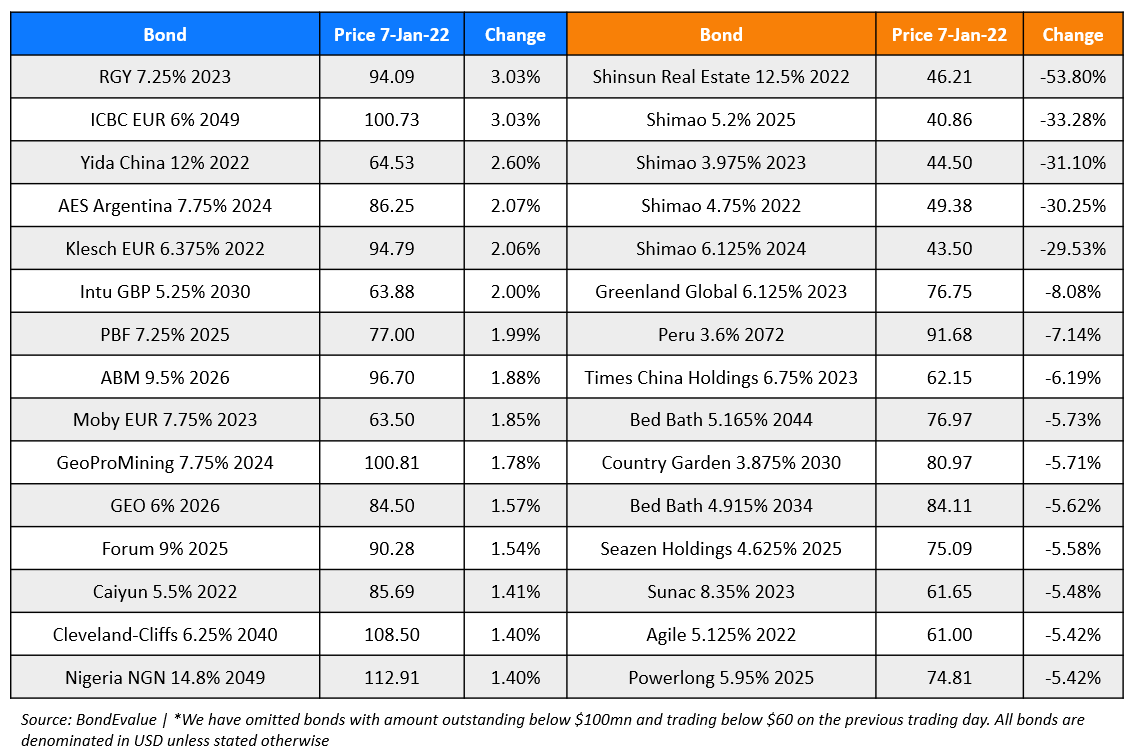