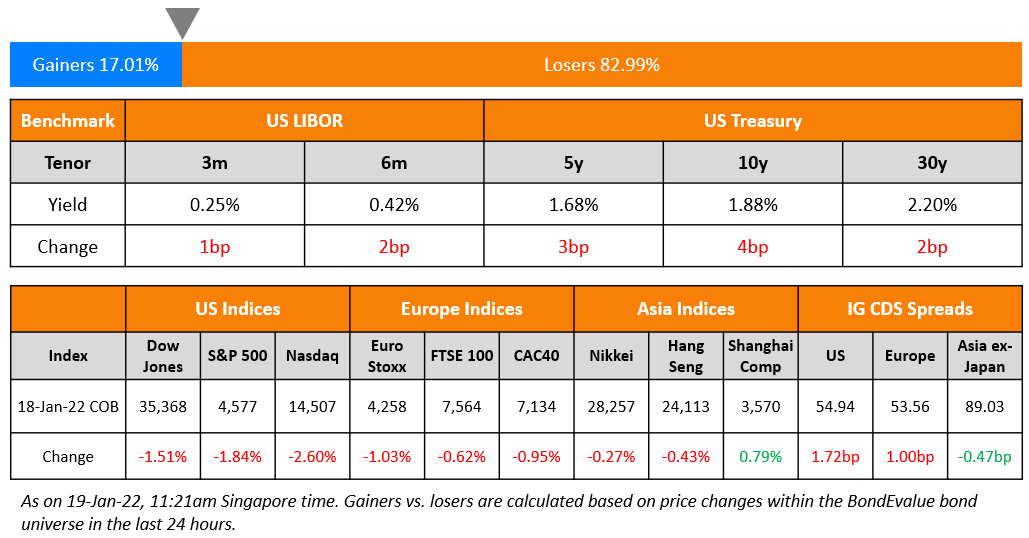 US equity markets dropped sharply after the long weekend with the S&P and Nasdaq down 1.8% and 2.6% on Tuesday. Barring Energy that was up 0.4%, all other sectors were in the red led by IT and Financials down 2.3-2.5%. US 10Y Treasury yields rose a further 4bp to 1.88%, the highest level in two years. European markets also closed lower on Monday with the DAX, CAC and FTSE down 1%, 0.9% and 0.6% respectively. Brazil’s Bovespa closed 0.3% higher. In the Middle East, UAE’s ADX and Saudi TASI were up 0.2%. Asian markets have opened mixed – Shanghai and Nikkei were down 0.3% and 2.3% while HSI and STI were up 0.1% each. US IG CDS spreads were 1.7bp wider and HY CDS spreads were 7.1bp wider, EU Main CDS spreads were 1bp wider and Crossover CDS spreads were 4.6bp wider. Asia ex-Japan CDS spreads were 0.5bp tighter. Citi raised $5.5bn via a three-tranche deal. It raised:

The bonds have expected ratings of A3/BBB+.

Housing and Development Board raised S$950mn via a 7Y bond at a yield of 1.971%, unchanged from the initial guidance, and in line with their target of a minimum S$800mn size with a S$150mn greenshoe. The bonds have expected ratings of AAA (Fitch). Proceeds are intended for the issuer’s development programmes, working capital and refinancing. The new bonds are priced 1.9bp tighter to its existing 2.675% Jan 2029s that yield 1.99%

The bonds have expected ratings of BBB+/BBB+ (S&P/Fitch). The 3.25Y bond received orders over $1.1bn, 2.8x issue size, while the new 5Y green bond received orders over $900mn, 3x issue size. Proceeds for the 3.25Y bond will be used for general corporate purposes, while proceeds for the 5Y green bond will be used to provide green loans and other financial services in accordance with the issuer’s sustainable financing framework, especially for purchasing, leasing and trading in zero emission vehicles such as battery electric vehicles and fuel cell electric vehicles. For the 3.25Y bond, asset and fund managers received 69%, corporates 10%, insurance and pension funds 10%, private banks 6% and others 5%. North America accounted for 57%, EMEA 23% and APAC 20%. For the 5Y green bond, asset and fund managers received 51%, corporates, government agencies and central banks 17%, insurance and pension funds 15%, banks 11% and others 6%. APAC took 40%, EMEA 13% and North America 47%. The new 3.25Y bonds are priced 15.5bp tighter to its existing 5.875% 2025s that yield 2.28%. The new 5Y green bonds are priced at a 8bp greenium (tighter) over its existing 3.5% non-green November 2026s that yield 2.58%.

Huzhou City Investment Development raised $300mn via a 3Y bond at a yield of 2.85%, 45bp inside the initial guidance of 3.3% area. The bonds have expected ratings of BBB (Fitch), and received orders over $1.2bn, 4x issue size. Proceeds will be used for working capital and general corporate needs.

Caofeidian State Holding Investment Group raised $100mn via a 35-month bond at a yield of 2.1%, 10bp inside the initial guidance of 2.2% area. The bonds are unrated. Proceeds will be used for working capital. The bonds are supported by a letter of credit from China Zheshang Bank Beijing branch. Caofeidian State Holding Investment Group is wholly owned by the Tangshan SASAC in China.

Jiaozuo Investment raised $100mn via a 364-day bond at a yield of 5.5%, unchanged from final guidance. The bonds are unrated. Proceeds will be used for general corporate needs including project construction, debt repayment and working capital requirements.

Consent solicitation is an offer by the issuer to change the terms of the security agreement. These are applicable for changes to bonds or shares issued and can range from distribution payment changes and covenant changes in bonds to changes in the board of directors with regard to equities. Olam has launched a consent solicitation for its SGD and USD denominated bonds to waive any event of default or potential event of default.

“There’s speculation about increasing aggression from the Fed…kickstared by Jamie Dimon casually suggesting last week that [policymakers] could hike six or seven times this year, and the move has gathered momentum”.

“This all reflects bond markets catching up to the reality of inflation, that central banks are behind the curve and are now scrambling to get ahead of it. The market is scratching its head and saying we were just too complacent.”

“In the short term, we see some downside on growth stemming from virus containment measures… In the longer term, we mainly expect slower growth as supply-driven inflation erodes households’ real spending power, which weighs on consumption and euro zone GDP. Omicron or other strains could further aggravate this negative impact of cost-push inflation”

“Zero and negative interest rates respectively are pure emergency measures. With inflation above target and inflation risks tilted to the upside as well as a tight labour market and a closed output gap there is no reason to keep rates that low”.

“While in theory they should be able to repay debt maturing in July this year from the FX reserve, this will certainly affect the repayment of debts later on… Talk of obtaining a meaningful bilateral financing arrangement do not seem sufficient right now.”

We have not held Sri Lankan debt for close to a year, troubled by the current-account developments — much weaker tourism and remittances than expected, weak economic growth and lack of commitment to an IMF program, which we would see as essential” 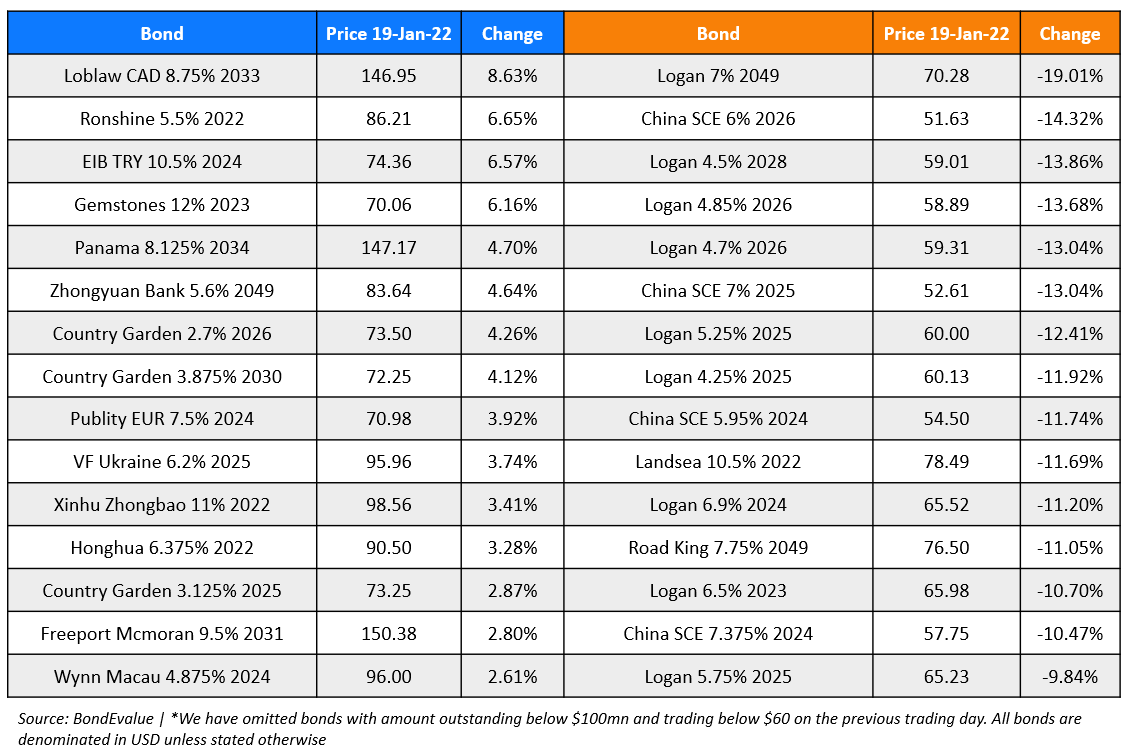