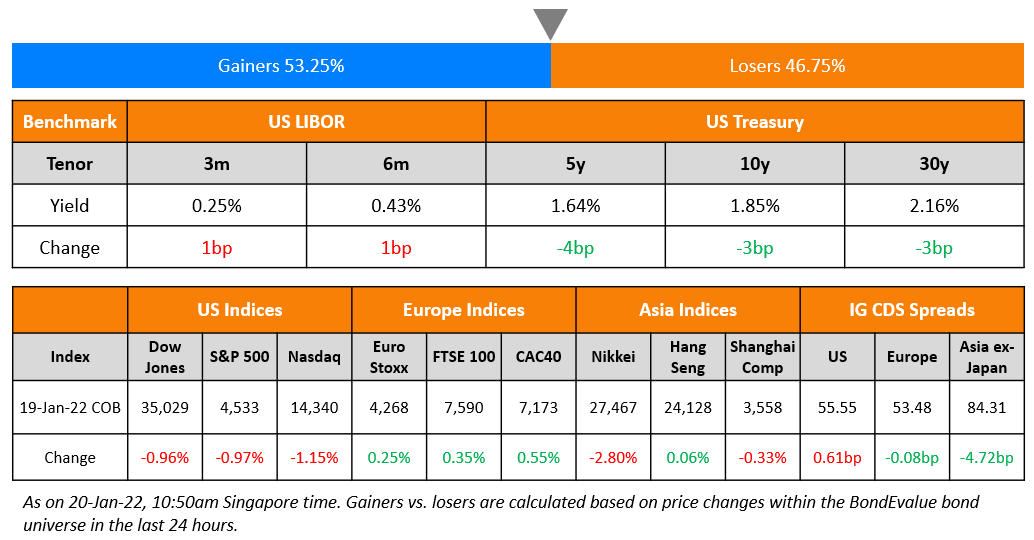 China cut its 1Y and 5Y Loan Prime Rate (Term of the Day, explained below) by 10bp and 5bp respectively to 3.7% and 4.6% in an effort to boost lending in the economy. While it was the second consecutive month of 1Y LPR cuts, this was the first 5Y LPR cut since April 2020. 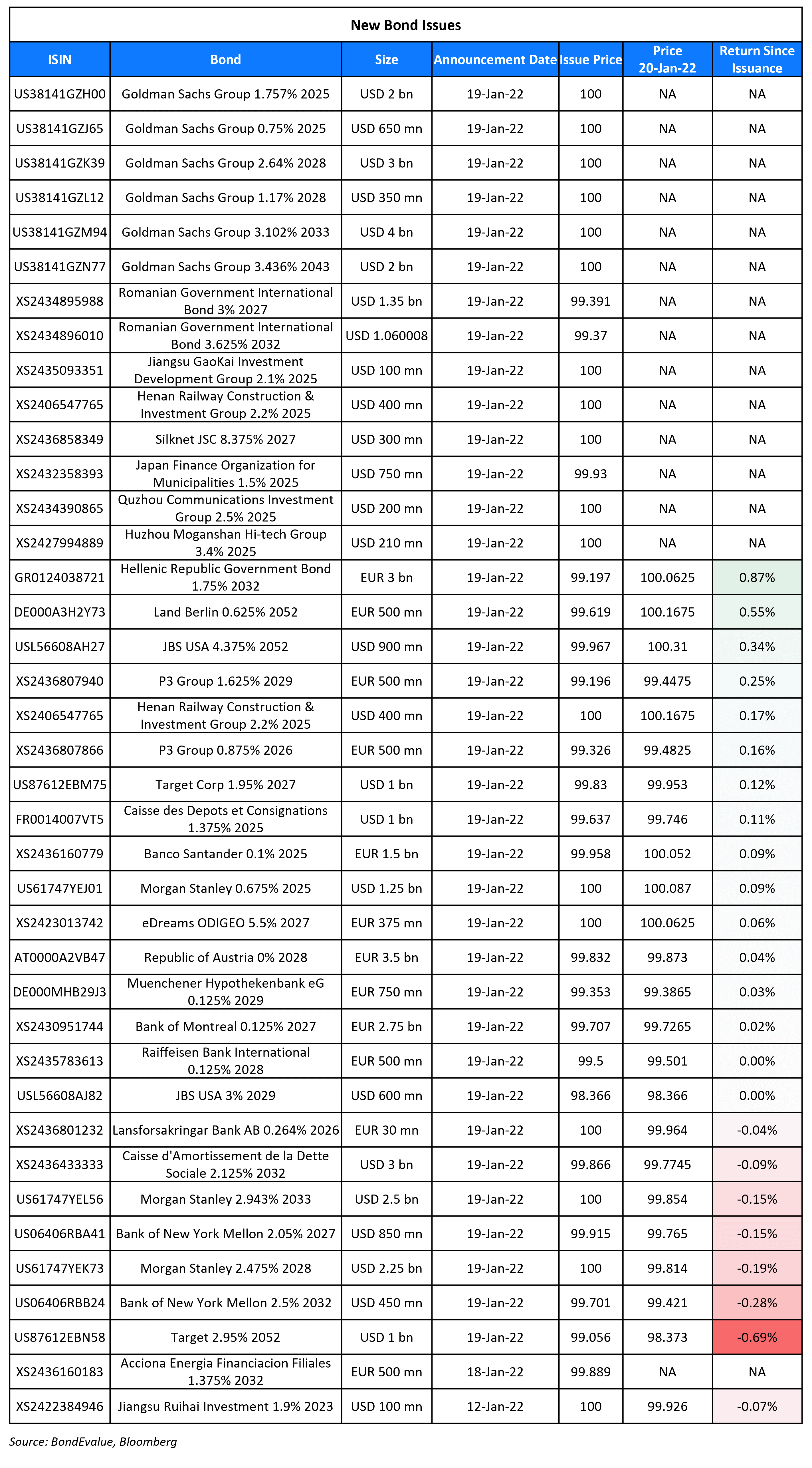 Goldman Sachs raised $12bn via a six-tranche deal. Details are given in the table below:

The bonds have expected ratings of A2/BBB+. Proceeds will be used for general corporate purposes. This marks the third-largest ever deal from a US bank, after Bank of America’s $15bn and JPMorgan’s $13bn deals, both raised in April 2021. The new 3NC2 fixed-rate bonds are priced 38.3bp tighter to its existing 3.75% 2025s that yield 2.14%.

Morgan Stanley raised $6bn via a three-tranche deal. It raised:

The bonds have expected ratings of A1/BBB+/A. Proceeds will be used for general corporate purposes.

China Water Affairs raised $150mn via a tap of its 4.85% Green bond due 2026 at a price of 97, inline with final guidance, and yielding 5.64%. The bonds are rated Ba1/BB+ (Moody’s/S&P) and guaranteed by its offshore subsidiaries. Proceeds will be used to repay bonds due February 2022 and other debt, as well as for working capital. An amount equal to the net proceeds will finance or refinance green projects, particularly water supply projects. The new bonds are priced at a new issue premium of 61bp over the existing 4.85% 2025s that yield 5.03%.

Henan Railway Construction & Investment raised $400mn via a 3Y green bond at a yield of 2.2%, 25bp inside initial guidance of 2.45% area. The bonds have expected ratings of A2 (Moody’s), and received orders over $1.65bn, 4.1x issue size. Proceeds will be used to finance, refinance and replenish the working capital of eligible green projects.

Huzhou Moganshan Hi-tech raised $210mn via a 3Y bond at a yield of 3.4%, unchanged from final guidance. The bonds are unrated. Proceeds will be used for funding project development and for working capital.

Quzhou Communications Investment Group raised $200mn via a 3Y green bond at a yield of 2.5%, 40bp inside initial guidance of 2.9% area. The bonds have expected ratings of BBB- (Fitch). Proceeds will be used for project construction in accordance with the issuer’s green finance framework.

Jiangsu Gaokai Investment Development raised $100mn via a 3Y bond at a yield of 2.1%, unchanged from final guidance. The bonds are unrated and supported by a letter of credit from Bank of Jiangsu Nantong branch.

Jiangsu Ruihai Investment raised $100mn via a 364-day bond at a yield of 1.9%. The bonds are unrated. Proceeds will be used for debt refinancing and working capital. The bonds are supported by a letter of credit from Bank of Shanghai Nanjing branch.

On the view that the Fed’s hawkish monetary policy will hurt equity, bond markets – Jim Bianco, founder of Bianco Research

“Quantitative tightening most hurts risk markets like the equity market, the corporate bond market.” “Those markets are going to struggle.” “The Fed did wait way too long in trying to address this issue,” said Bianco. “I don’t think there is a magic policy they could do that would help quell the inflation concerns, help the financial markets, help the economy at the same time. Because everybody is concerned about inflation, they ultimately are going to respond to it, and the risk is that they’re going to go too far.”

On the view that the Fed will likely hike rates eight times to curb inflation – Bruce Richards, chief executive officer and co-founder of Marathon Asset Management

“We’re going to see a deceleration of growth due to tighter financial conditions and this higher inflationary rate, that stymies the consumers’ ability to spend. That’s what’s gonna happen in the next year,” he said. “Earnings will be up 8 or 10% this calendar year and with that companies are in good shape,” he said. “It’s not a corporate default rate event that happens now. Save that one for the recession.” “I think that every market’s incredibly vulnerable from here.”

“Even though market expectations have already run a long way, it is difficult for the market to gauge whether it will be surprised on the slightly restrictive side next week.”

In a note by Societe Generale analysts

“Price action (in Russian assets) could get a lot worse if the next diplomatic effort on Friday between Moscow and Washington comes to nothing.” “New sanctions would inflict more pain on the currency and the country’s debt market, and possibly prompt intervention by the central bank.”

On Scotiabank’s view that the Bank of Canada will raise rates to 2% to quell inflation – Jean-Francois Perrault, Scotiabank Chief Economist

“The simple reality is that the very serious public health impacts of omicron and the associated economic consequences do not outweigh the pressing need to withdraw monetary stimulus.” “Even with this pace of tightening, the real policy rate would remain negative at the end of this year.”

“We have to make inequality a priority and not the spending cap.” “Brazil has to put the poor back in the budget and tax the rich.” 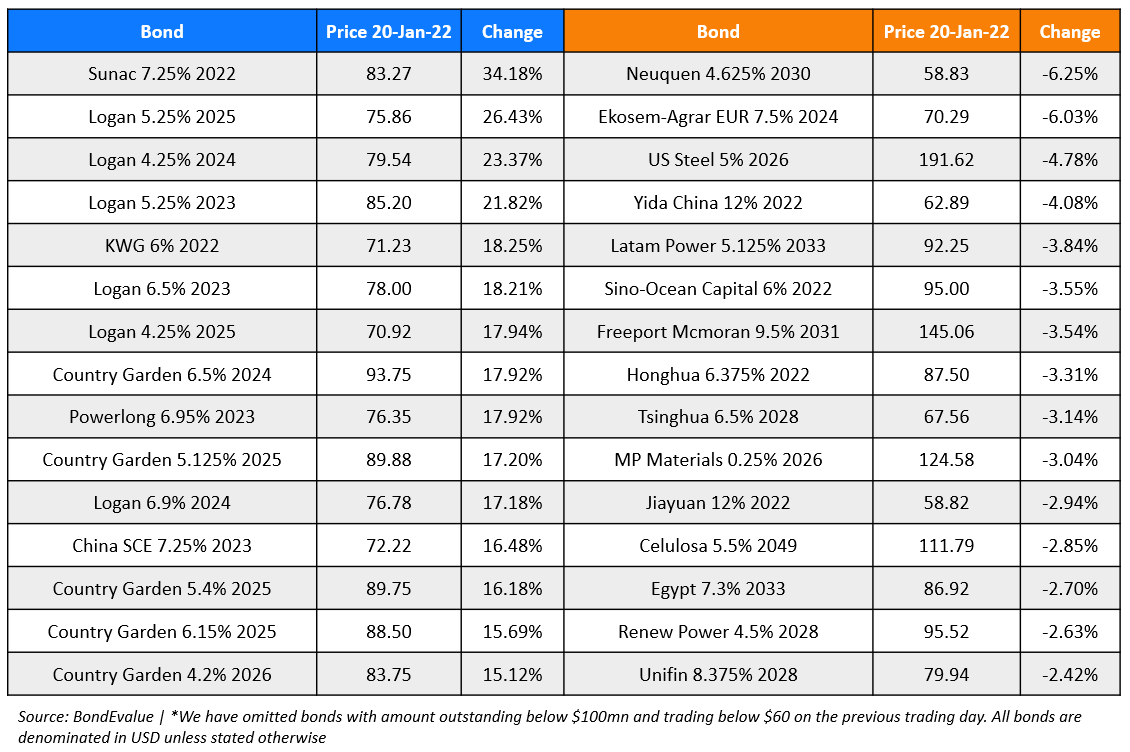