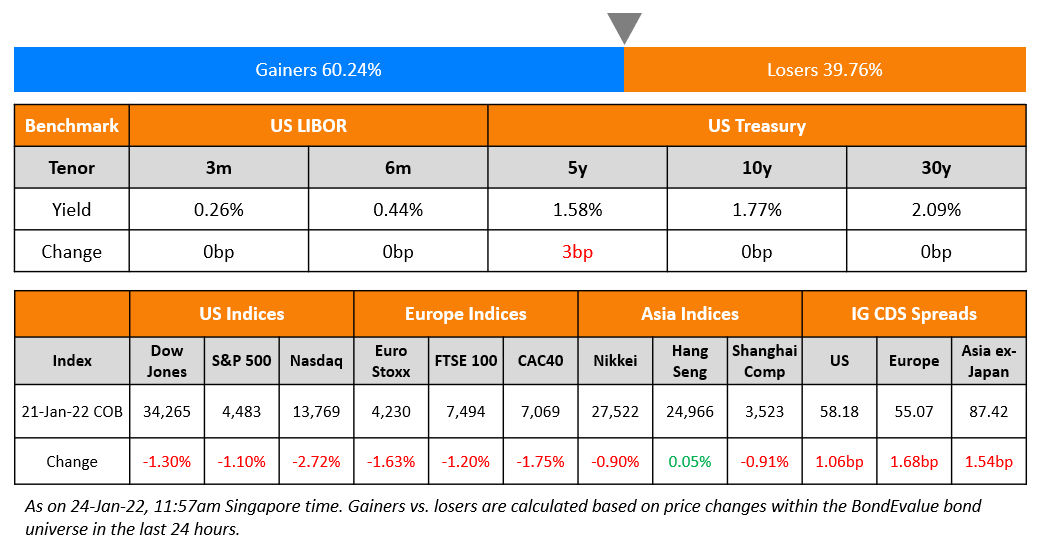 US equity markets dropped yet another day on Friday, with the S&P and Nasdaq down 1.9% and 2.7% as the risk-off sentiment continued to weigh on markets. Most sectors were in the red with Communication Services and Consumer Discretionary down 3.1% and 3.9%. US 10Y Treasury yields were flat at 1.77% after easing 8bp on Thursday. European markets closed mostly higher with the DAX and CAC down 1.9%, 1.8% and 1.2%. Brazil’s Bovespa closed 0.2% lower. In the Middle East, UAE’s ADX was up 0.3% and Saudi TASI was down 1.1%. Asian markets have broadly opened in the red – HSI, STI and Nikkei were down 1%, 0.1%, 0.6% while Shanghai was up 0.2%. US IG CDS spreads were 1.1bp wider and HY CDS spreads were 5.7bp wider, EU Main CDS spreads were 1.7bp wider and Crossover CDS spreads were 7.9bp wider. Asia ex-Japan CDS spreads were 1.5bp wider.

On global bonds rallying amid tech selloff and Russia tensions

“The Treasury market is reacting to equities; we saw an ugly close for European equities and the Nasdaq is down 10% plus this year.” “Treasuries have repriced sharply higher this year and now they are providing some offset to declining equities.” “Heading into the Fed meeting next week, the 10-year at 1.75% is a market that looks better balanced.”

The recent bond rally is “a function of stretched investor positioning and some global risk-off due to continuing U.S.-Russia tensions around Ukraine, and as reflected in sharply weaker equity markets.”

“From here, we look for a consolidation in Treasuries, but with a mild upward bias to yields as expectations for rate hikes and sustained growth remain.”

On the narrow spread between junk bond and Treasury yields

“Watching high yield is necessary when looking for contagion and any economic repercussions of the changing macro landscape and worries about the inflation stressed consumer.”

“By far the most compelling positives in the credit markets today are credit fundamentals and the trajectory of those fundamentals. The backdrop is still very supportive.” “When the Fed is removing liquidity and removing accommodation from the system, credit volatility and spread volatility goes up, creditworthiness tends to plateau, and we’re looking for that tipping point. We think that’s still at least 12 months out.”

“For steepening to really have legs, it would take the Fed relying more heavily on its balance sheet to convey monetary policy as opposed to the fed funds target rate.”

“The market is getting way ahead of itself in terms of pricing in hikes.”

“This will be a tough year for investors,” Ellenberger said. “The Fed wants to bring inflation to its 2% target without hurting growth and the stock market.”

“Personally, I expect the economic data to remain relatively good despite being affected by the Omicron variant.”

On the expectation that inflation will slow, but no rate hike in 2022 – Gabriel Makhlouf, Ireland’s central bank governor and European Central Bank Governing Council member

“If we see risks of those sort of second round effects happening then we will definitely be taking action at the European Central Bank to manage that.” “We do see inflation falling during the course of this year.” “It’ll probably — in the euro area — stay over 2% throughout the course of this year, but it’ll fall from the level it’s been at.”

“We are of the view that we are at a major inflection point in terms of policy and we are likely to see some significant easing.” “The property market had been under pressure because (the government) wanted to deleverage and to some extent they achieved that.” “Now China wants to make sure that the rest of the sector is not at risk.” “SOEs are a significant part of the market but are not dominating it so it is difficult for them to engineer an SOE-lead restructuring. You need to have strong participation from the private sector,” he said. “We think it’s going to be the year of the great normalization in Asia high yield, with a focus on China.” “Asian high yield, and China more specifically, will be a key driver of EM fixed income performance in 2022.”

On the view that China needs a more expansive fiscal policy to stablise economy- Yu Yongding, former member of the monetary policy committee of the People’s Bank of China

“Under the current economic situation, the role the PBOC can play is limited.” “Monetary policy loosening should be limited because its not very useful as it may create other problems.”

On the view that China’s bear market is not over yet – Jonathan Garner, chief Asia and emerging markets strategist for Morgan Stanley

“How much longer, or further, can this bear market go?” “Our judgment is we’re getting closer to the end, but unfortunately, we think that further de-rating of the growth part of China and emerging markets is likely.” 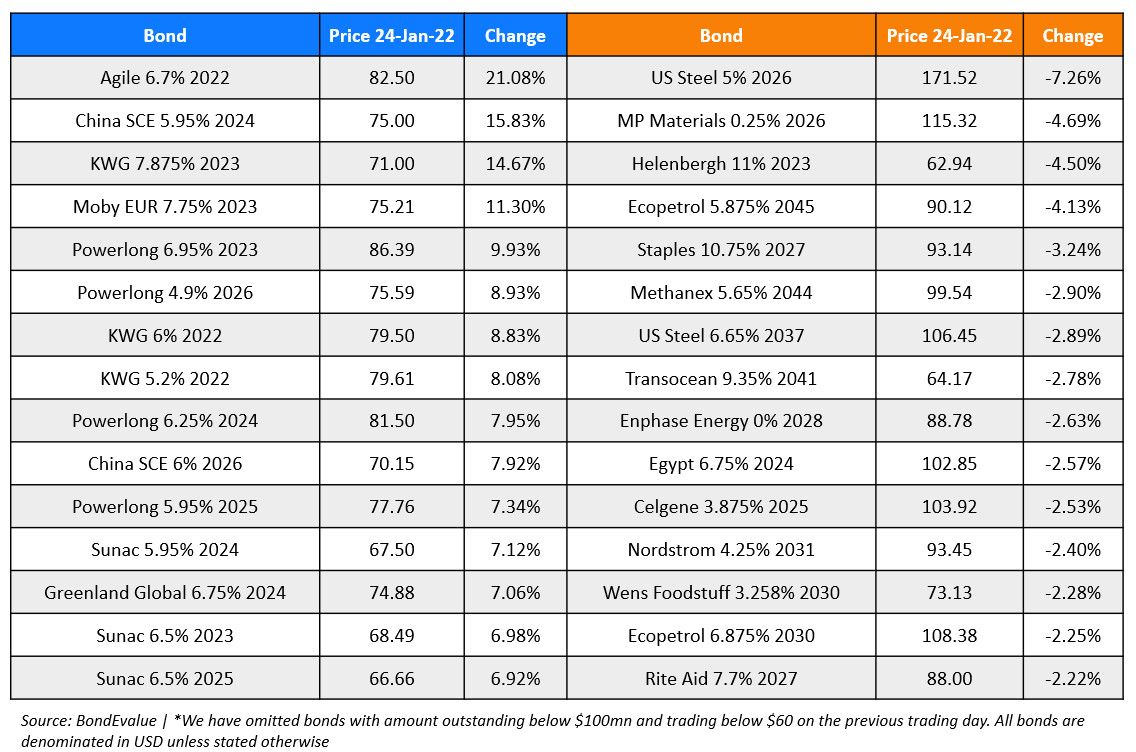