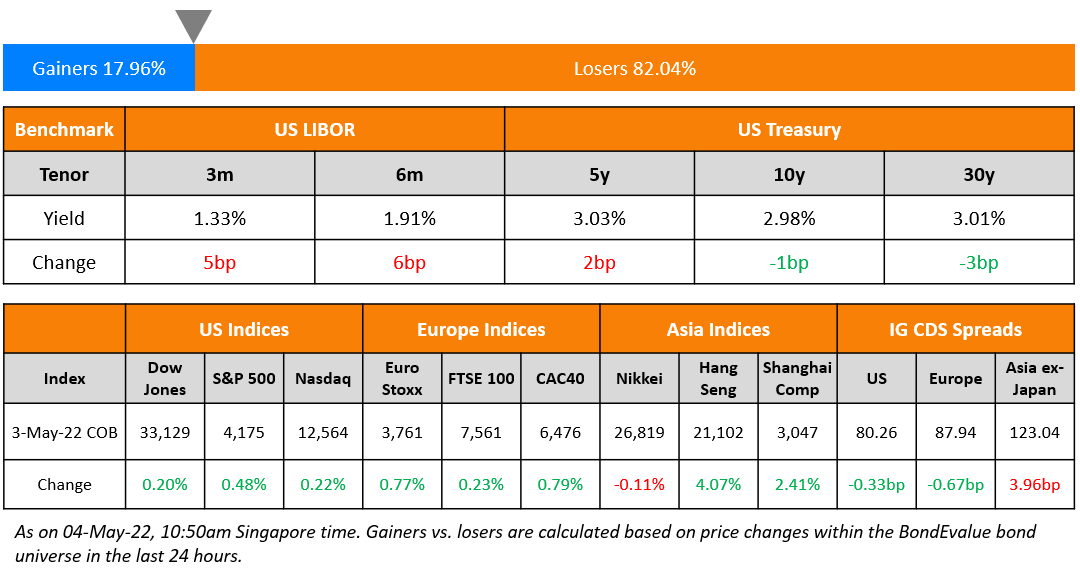 US equity markets inched higher with the S&P up 0.5% and Nasdaq up 0.2%. Most sectors were in the green, led by Energy, up 2.9%. US 10Y Treasury yields were 1bp lower at 2.98%, after having crossed the 3% mark for the first time since December 2018. European markets were higher – DAX, CAC and FTSE were up 0.7%, 0.8% and 0.2% respectively. Brazil’s Bovespa closed 0.1% lower. In the Middle East, UAE’s ADX and Saudi TASI were closed due to Eid holidays. Asian markets have opened weaker – HSI, and STI were down 1.2% and 0.6% while Shanghai and Nikkei are closed. US IG and HY CDS spreads tightened 0.3bp and 11bp respectively. EU Main CDS spreads were 0.7bp tighter and Crossover spreads were 8bp tighter. Asia ex-Japan CDS spreads were 4bp wider.

All eyes now focus on the FOMC meeting decision later today, with the Fed expected to hike by 50bps. Market participants are also looking forward to the Fed’s guidance on future rate increases. 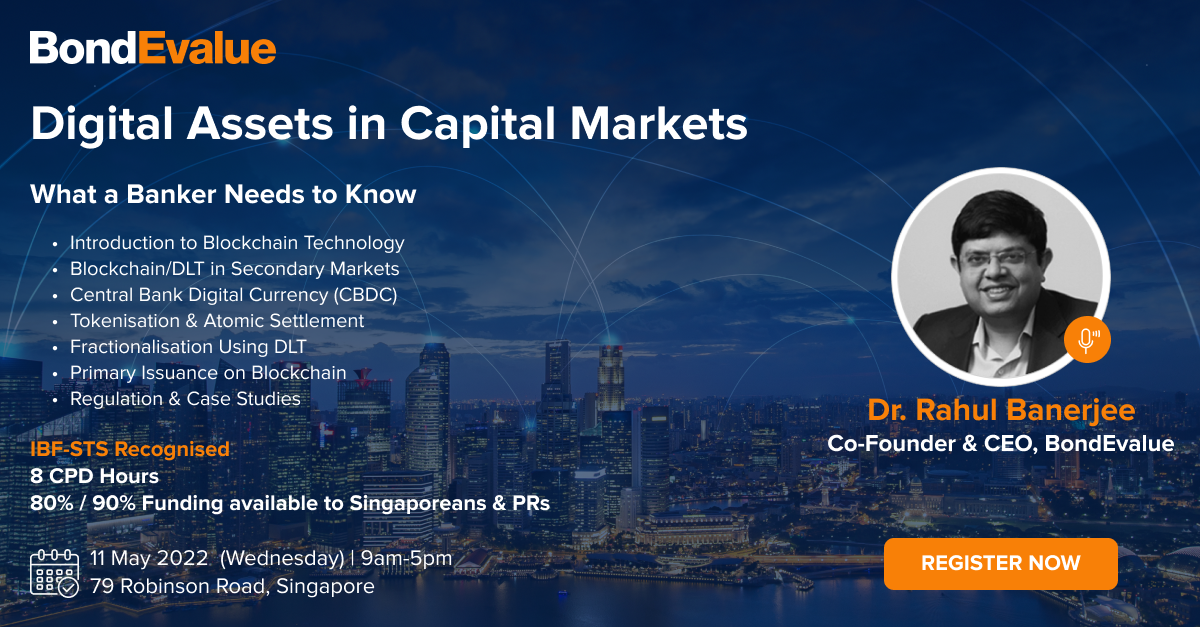 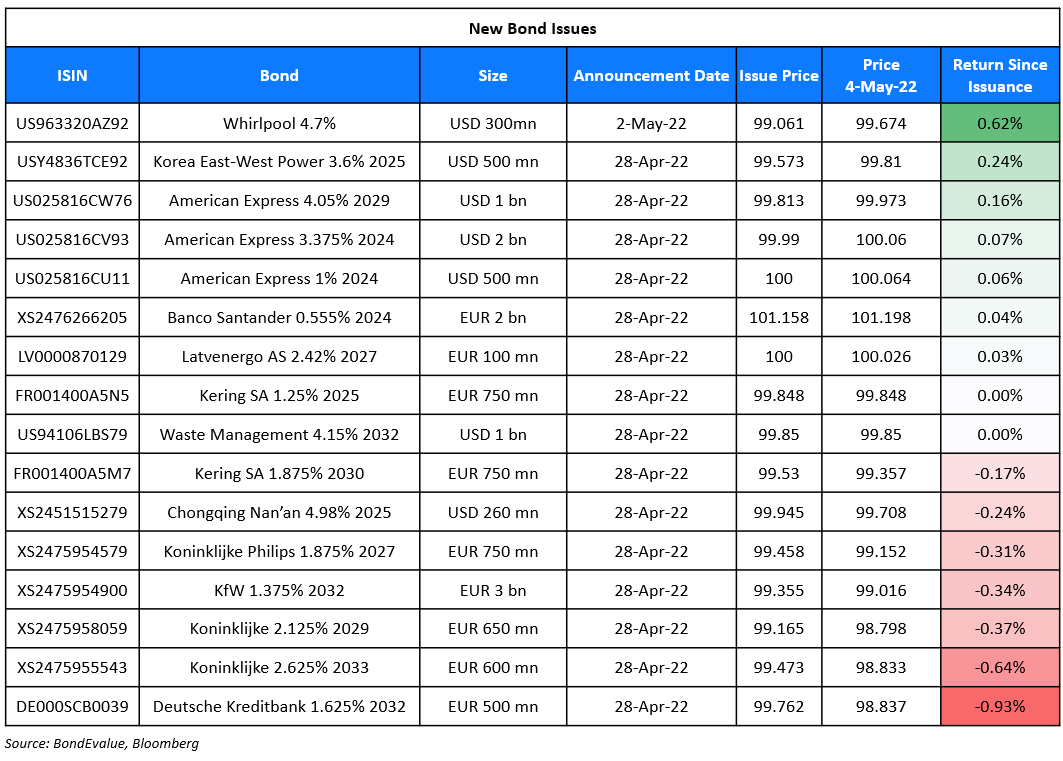 “It’s not enough to talk now — we have to act. From today’s perspective, I think a rate hike in July is possible… inflationary pressures are “broadening”

“You’re getting very different signals right now from the markets… For the last 10 years we’ve all been largely in sync, and for the first time there’s huge regional differences in the economic outlook. We’re only one hydrocarbon sanction away from a recession starting”

“We think bond yields can stabilize around the current levels. What’s already in the price matters. I can see a scenario where the Fed is being hawkish and is still hiking, but longer-dated bond yields don’t rise very much.”… Anticipate that bonds still face “headwinds of high inflation, robust growth, and increasing government bond supply as central banks begin to unwind their balance sheets…. The limited history that we have suggested that QE doesn’t necessarily mean go long duration and QT doesn’t mean be short bonds. It’s more complex than that.”

On Fed ‘Not Out of Bullets’ Yet to Control Inflation

“The Fed is not out of bullets. The Fed hasn’t even started to shoot… If they need to do what Volcker did and choke out markets because inflation is out of control, they’ll do what they have to”

“I learned distressed investing at Apollo, where part of the concept was that it’s fundamentally important when you design debt documents to be able to protect yourself. Sometimes you’re in a bad company with a bad balance sheet, and the only way to get a return there is to write the docs and keep optionality for yourself, because it’s not a growing pie.”

Investors looking to protect themselves against more market turmoil should think about selling some blue chip companies’ shares and buying the corporations’ bonds instead.

“By rotating an equity that has outperformed to a fixed-income security on the other side, you are locking in that yield until the maturity of the security” 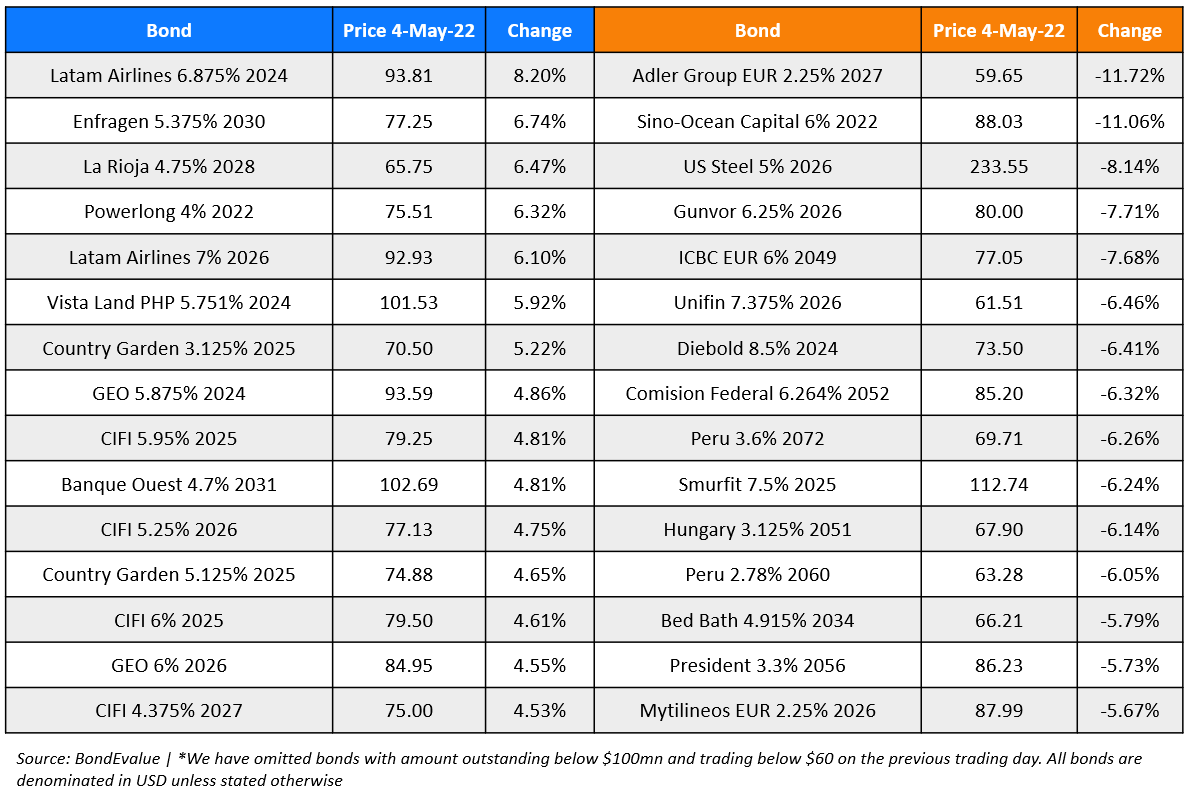