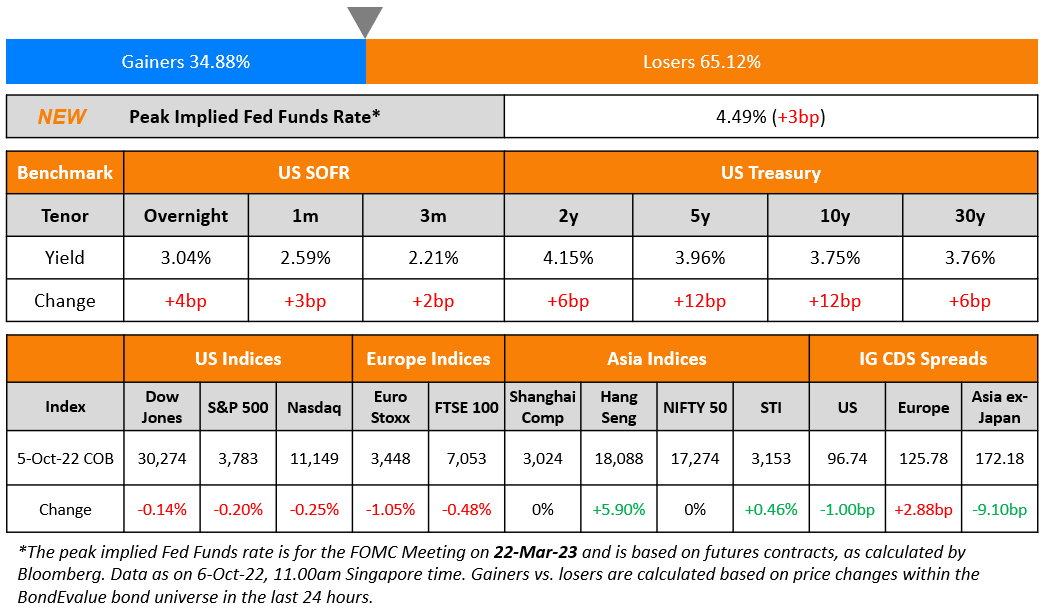 US Treasury yields jumped across the board on Wednesday with the the 5Y and 10Y yields leading the rise, up 12bp to 3.96% and 3.75%. The peak Fed Funds Rate currently stands at 4.49% for the FOMC’s March 2023 meeting, 3bp higher than yesterday. US credit markets saw a tightening of CDS spreads, with IG tightening by 1bp and HY tightening by 1.4bp. US equity markets saw their two-day rally end with the S&P and Nasdaq ending 0.2% and 0.3% lower respectively. As per Lipper, global bond funds witnessed an outflow of $175.5bn in the first nine months of 2022. This was the first time since 2022 that global bond funds on aggregate have seen outflows during the 9-month period. Adding to PIMCO and Fidelity that came out with calls in favor of buying bonds, Charles Schwab has also joined the chorus (scroll below to the Talking Heads for more details). 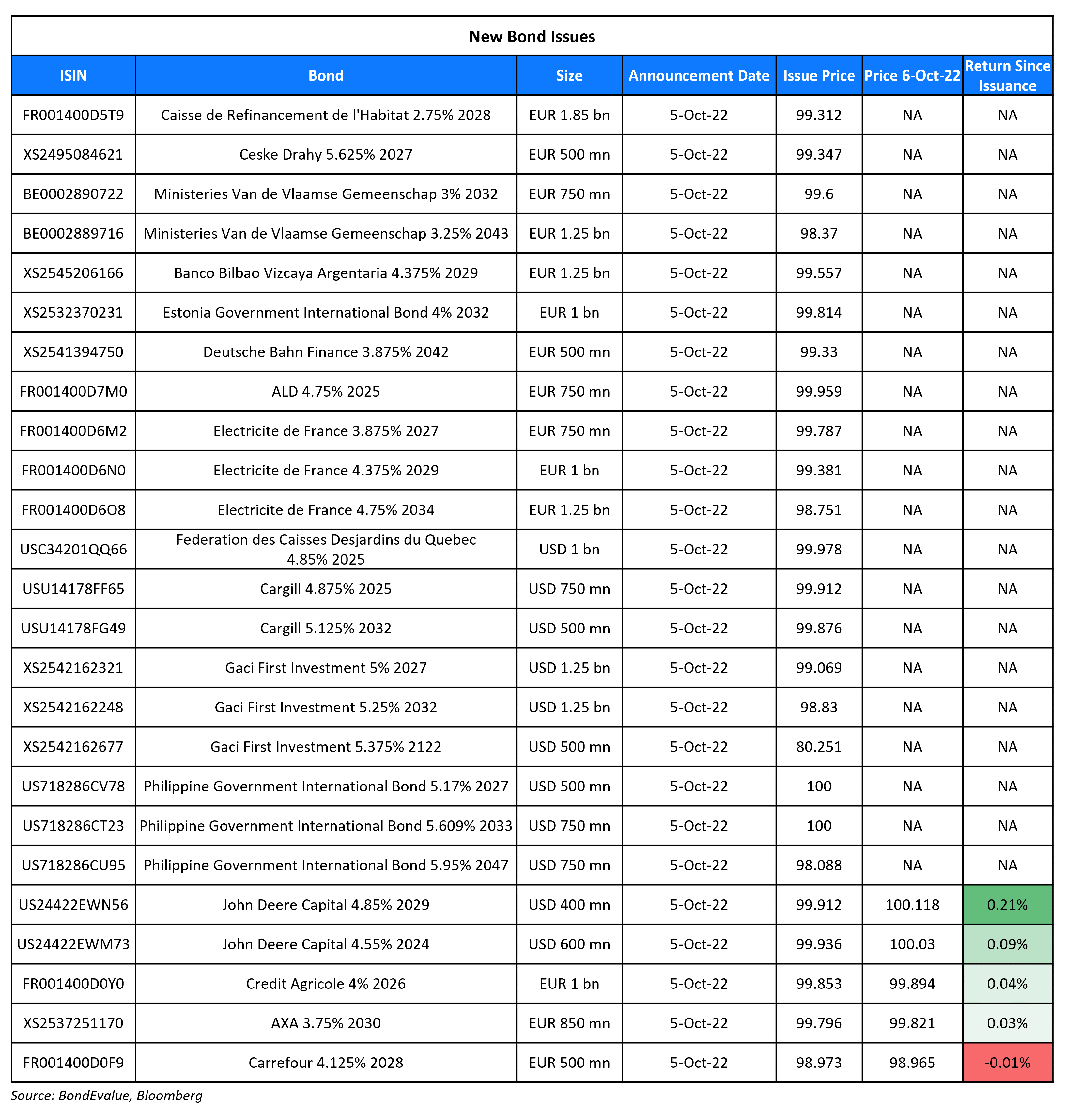 Philippines raised $2bn via a three-tranche deal. It raised

The senior unsecured green bonds have expected ratings of A1/A. Proceeds will be used for general corporate purposes and to finance Eligible Green Projects, as described in the Guarantor’s Green Finance Framework dated February 2022. The bonds are issued by Gaci First Investment Co and guaranteed by Public Investment Fund.

Credit Agricole raised €1bn via a 4NC3 social bond at a yield of 4.053%, 15bp inside initial guidance of MS+150bp area. The bonds have expected ratings of A3/A-/A+, and received orders over €1.5bn, 1.5x issue size. Proceeds will be used to finance Eligible Social Assets of Credit Agricole Group and its subsidiaries.

On Buying Bonds Could Be a Great Investing Move Right Now

“For the first time in a long time, there is actually income in fixed income”

“This year is well on its way to being the worst in modern history for bond investors”… bonds seem like “a tough sell” right now.

Inflation is likely “still in early days”… Despite “glimmers of hope, the overarching message I’m drawing…is that we are still decidedly in the inflationary woods, not out of them”… There is “considerable speculation already that the Fed could begin lowering rates in 2023 if economic activity slows and the rate of inflation starts to fall”

“We are monitoring the situation. They are working on a strategy due to come out at the end of October

“Investors are being quite cautious about putting their money at work and as we get toward the end of the year, that caution will increase”

“The high yield market might not be accessible to all companies currently. Companies with solid business models would still be able to access the debt markets, but will likely need to pay a higher coupon” 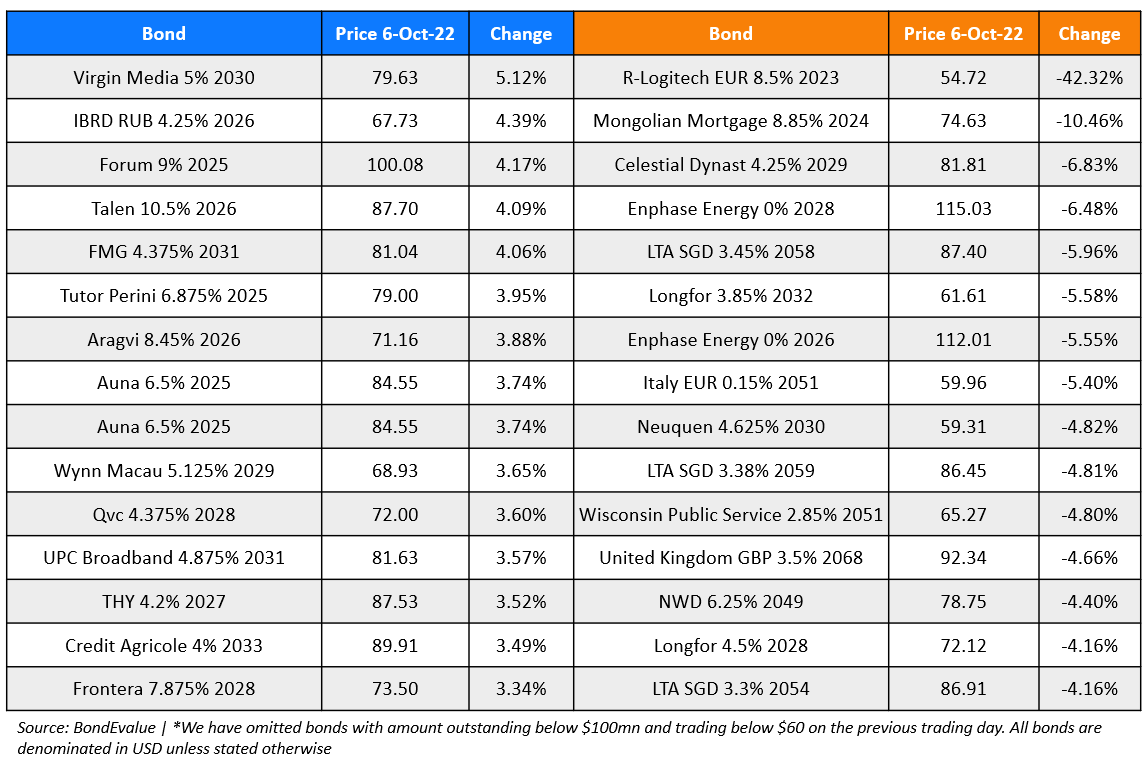