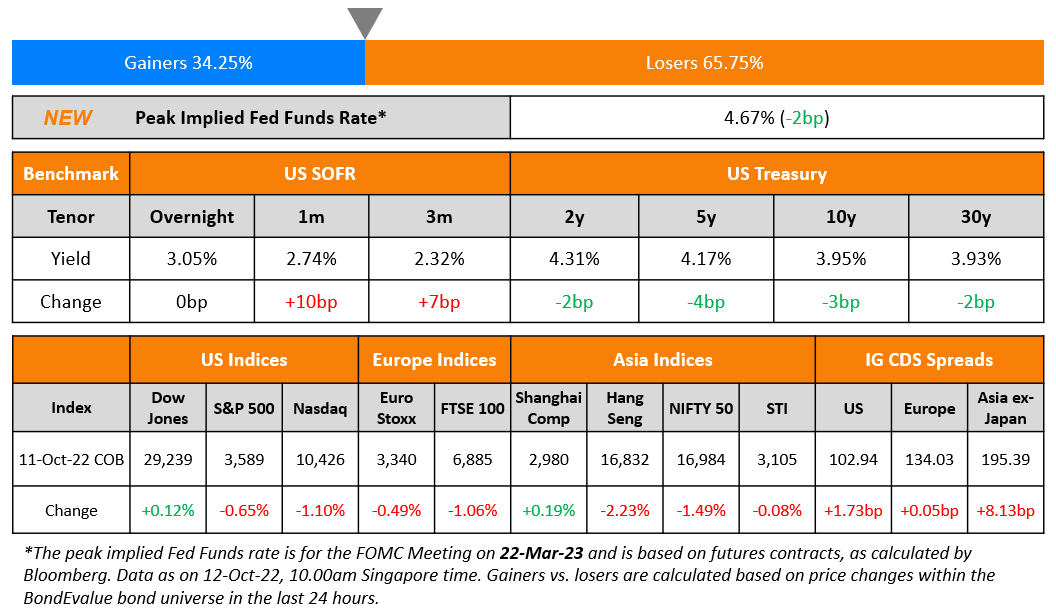 US Treasury yields eased slightly with the 5Y, 10Y and 30Y yields down 4bp, 3bp and 2bp respectively. The peak Fed Funds Rate eased 2bp to 4.67% for the FOMC’s March 2023 meeting, with further rate hikes by the Fed continuing to be priced in. In the credit markets, US IG CDS spreads widened 1.9bp and HY CDS spreads saw a 12.9bp widening. US equity markets ended lower with the S&P and Nasdaq down 0.7% and 1.1% respectively.

European equity markets ended lower too and CDS spreads widened – EU Main and Crossover CDS spreads tightened by 0.5bp and 6.1bp respectively. Asia ex-Japan CDS spreads widened 8.1bp and Asian equity markets have opened broadly lower today by over 0.7%. The IMF cut its global GDP growth forecast for 2023 to 2.7% vs. its July forecast of 2.9%. This is on account of higher interest rates that is expected to slow down the US economy, while Europe struggles with a spike in gas prices and China contends with continued lockdowns and a weakening property sector. 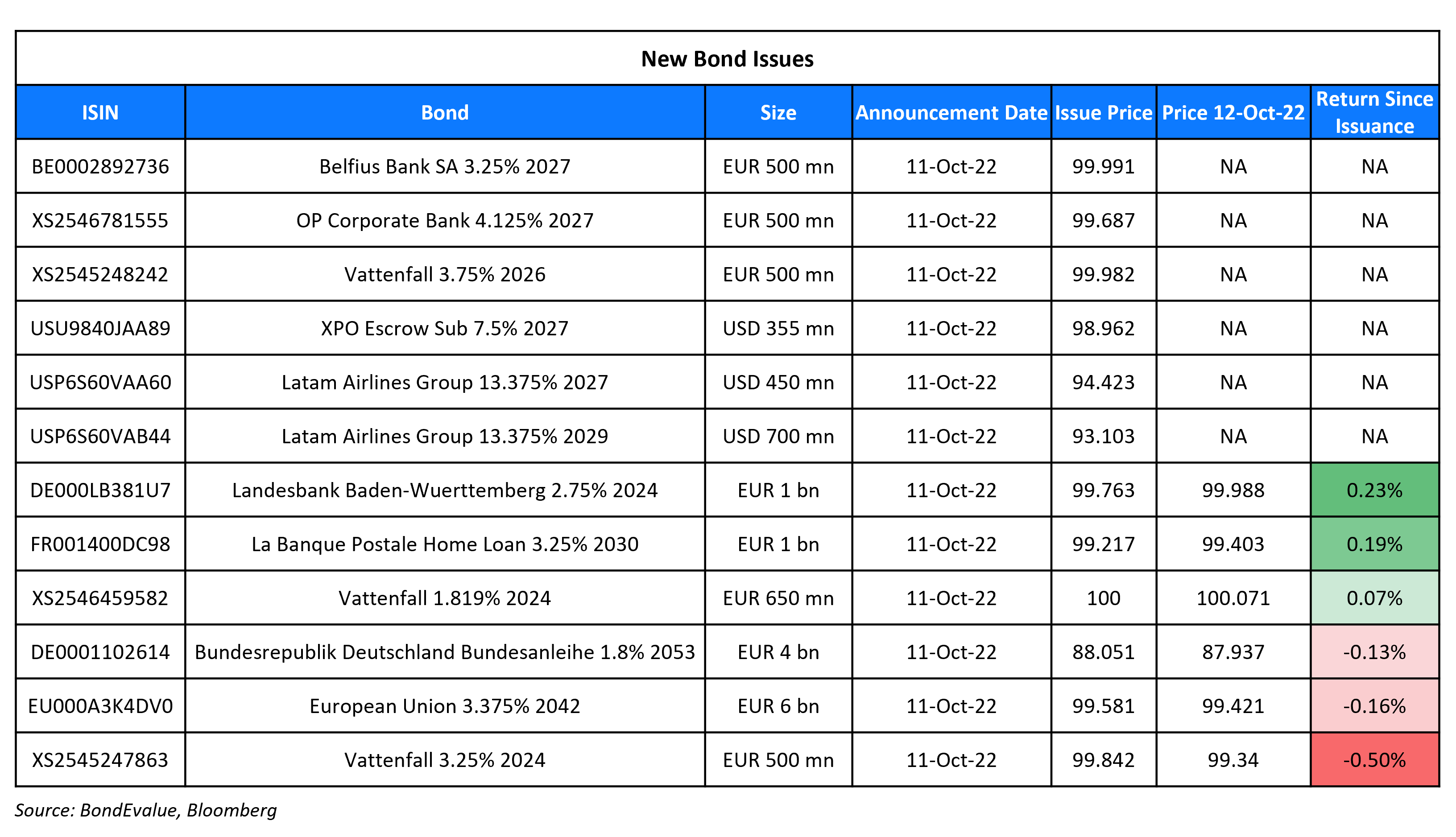 LatAm Airlines raised $1.15bn via a two-tranche deal. It raised:

Why I am starting to get excited about bonds for first time in years – Karen Ward, EMEA chief market strategist at JPMorgan Asset Management

If I’m right, then global bond prices really are starting to look enticing. Just look at the scale of adjustment we have seen. The global government bond benchmark now yields 3 per cent compared with 1 per cent at the start of the year, global investment grade now has a yield of over 5 per cent versus less than 2 per cent and global high-yield is once again worthy of such a title with a yield of almost 10 per cent… The correction in global bond markets, while painful, is nearing completion.

“I get concerned that a much stronger dollar will create a lot of pressure, particularly in hedging US dollar assets back to local currencies. When the central bank steps on the brakes, something goes through the windshield. The cost of financing has gone up and it will create tension in the system… The Fed is very clear that they want to get inflation back to 2%. When you start piecing everything together, rates have got to go higher than where they are, and they are going to stay there for a while”.

“The global environment is fragile… Financial stability risks have increased and the balance of risks is tilted to the downside… Soaring borrowing costs and tighter lending standards, coupled with stretched house valuations, could lead to a sharp decline in house prices”.

“A serious debt crisis is unfolding across developing economies, and the likelihood of a worsening outlook is high… It is urgent for us to step up and find ways in which we can deal with these issues before they become at least less manageable and perhaps unmanageable 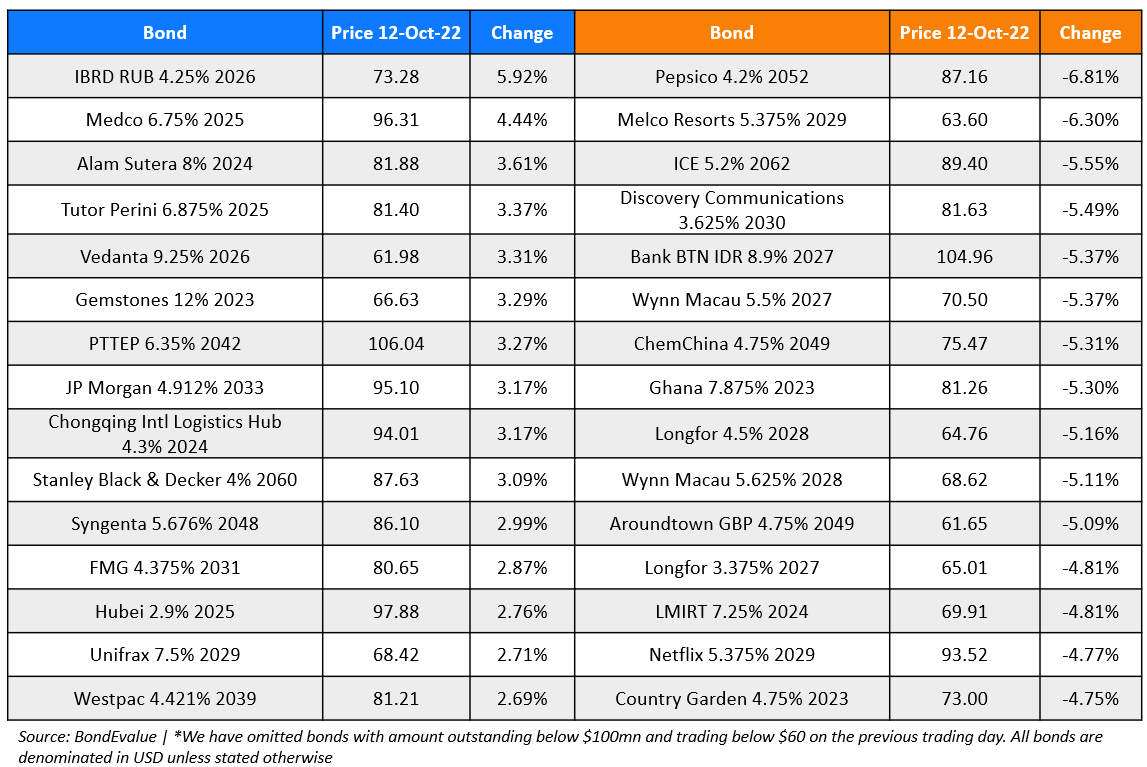