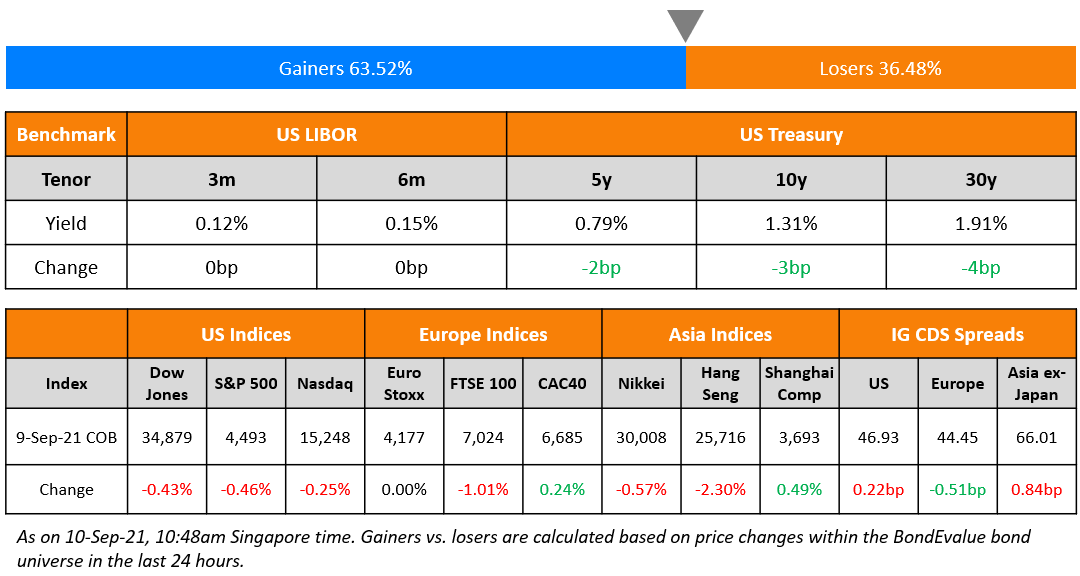 US markets started the day in the green after US jobless claims hit a post-pandemic low; however, negative sentiment gripped the markets in the second half – S&P and Nasdaq ended the day 0.5% and 0.3% lower. Financials up 0.3% was the only sector which provided some substantive support to the markets. Real Estate and Healthcare down 2.1% and 1.2% dragged the markets lower. IT, Industrials, Utilities and Consumer Staples were also down ~0.5%. European stocks were mixed after news of the ECB slowing the pace of its bond buying program – FTSE was down 1% while CAC and DAX were slightly up, 0.2% and 0.1% respectively. Brazil’s Bovespa regained some of Wednesday’s losses and closed 1.7% higher. UAE’s ADX closes 1.2% higher while Saudi’s TASI ended 0.3% lower. Asian markets inched higher – HSI started the day with gains of more than 0.5%. Nikkei, Shanghai and Singapore’s STI followed with gains of ~0.2-0.3%. US 10Y Treasury yields fell another 4bp to 1.3%. US IG and HY CDX spreads widened 0.2bp and 1.6bp respectively. EU Main CDS spreads were 0.5bp tighter and Crossover CDS spreads tightened 3.7bp. Asia ex-Japan CDS spreads widened 0.8bp.
US jobless claims hit a post-pandemic low as the economy continued to recover. In the week ending September 4, initial jobless claims reported 310k vs. 345k in the previous week (revised level). These were also better than expectations of 335k. This is the lowest level since March 14, 2020 when it recorded 256k. The 4-week moving average posted 339.5k, a decrease of 16.75k from the previous week’s revised average. This is also the lowest level since March 14, 2020 reported number of 225.5k. The European Central Bank (ECB) meanwhile voted to kept its monetary policy unchanged while dialing down on the pace of emergency bond purchases over the coming quarter. 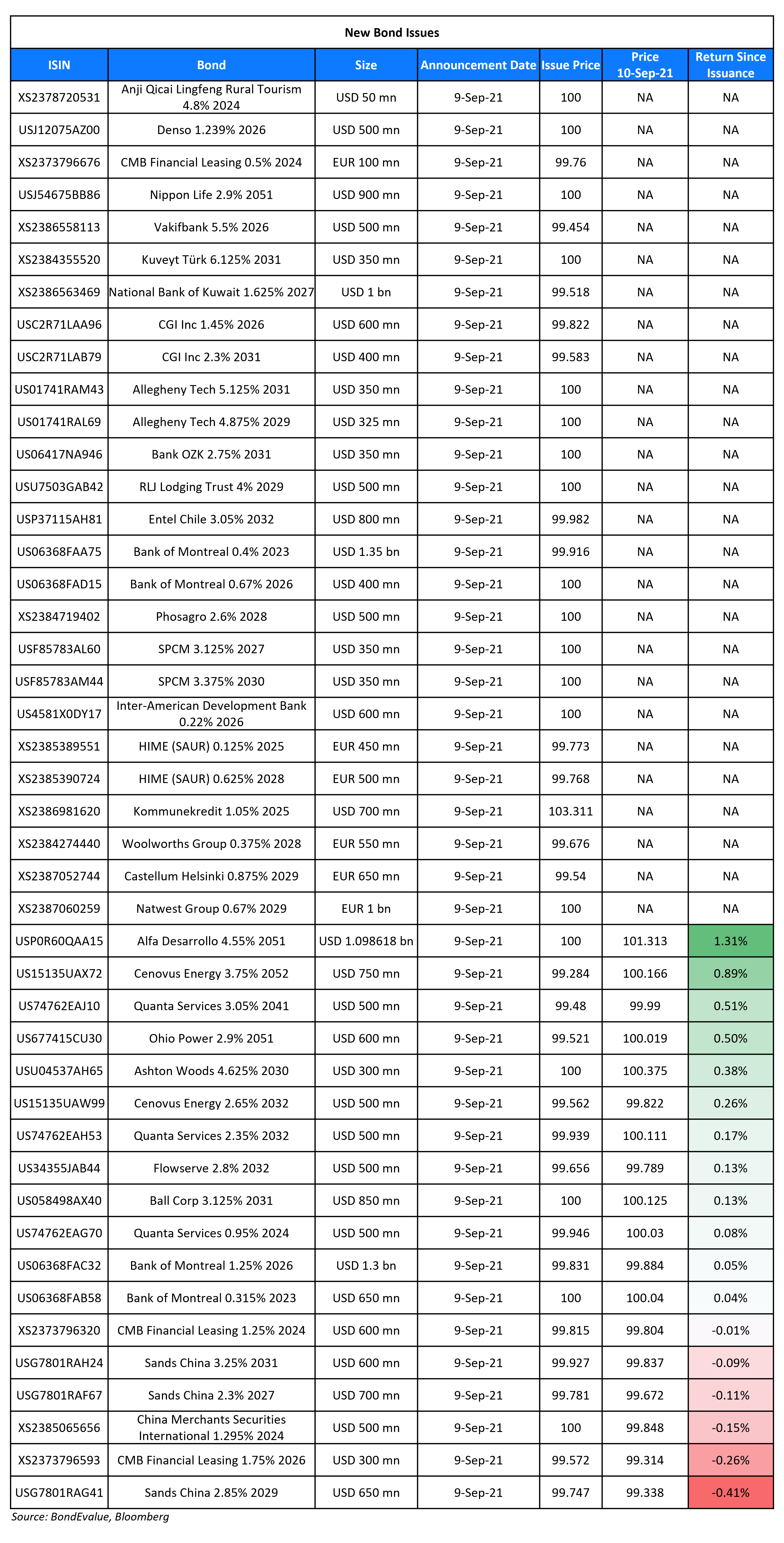 Trust loans or entrusted loans are loans where a bank acts as a trustee to lend money on behalf of a trustor which can be a government agency, enterprises/public institutions or individuals. Importantly, the bank that acts as a trustee only collects loan handling charges and will not assume liability for the repayment of the loan on behalf of the borrower. They are part of the shadow banking system and help provide quick access to capital especially if credit conditions are tight.

On ECB Bond Buying May Last For Years

“The ECB will remain highly accommodative for a long time as conditions for rates lift-off are unlikely to be met any time soon… Similar to the Bank of Japan, policy sustainability considerations might increasingly gain in importance.”

“The real question lies in what will happen when the PEPP is exhausted… To prevent a sudden step down in the ECB’s asset purchases, APP monthly purchases will be increased.”

“We remain optimistic that private sector business conditions will improve further in Q4 2021 as Expo 2020 gets underway and the recent further easing of travel restrictions boosts visitor numbers during the high season for the travel and tourism sector… Business activity grew at the fastest pace in over a year, but new work growth was more modest. The surge in activity last month may have been due to efforts to complete projects ahead of the start of Expo 2020 in October”

“A common element in all this continues to be high uncertainty – as new variants of the COVID-19 virus are impacting health and safety across the country.” 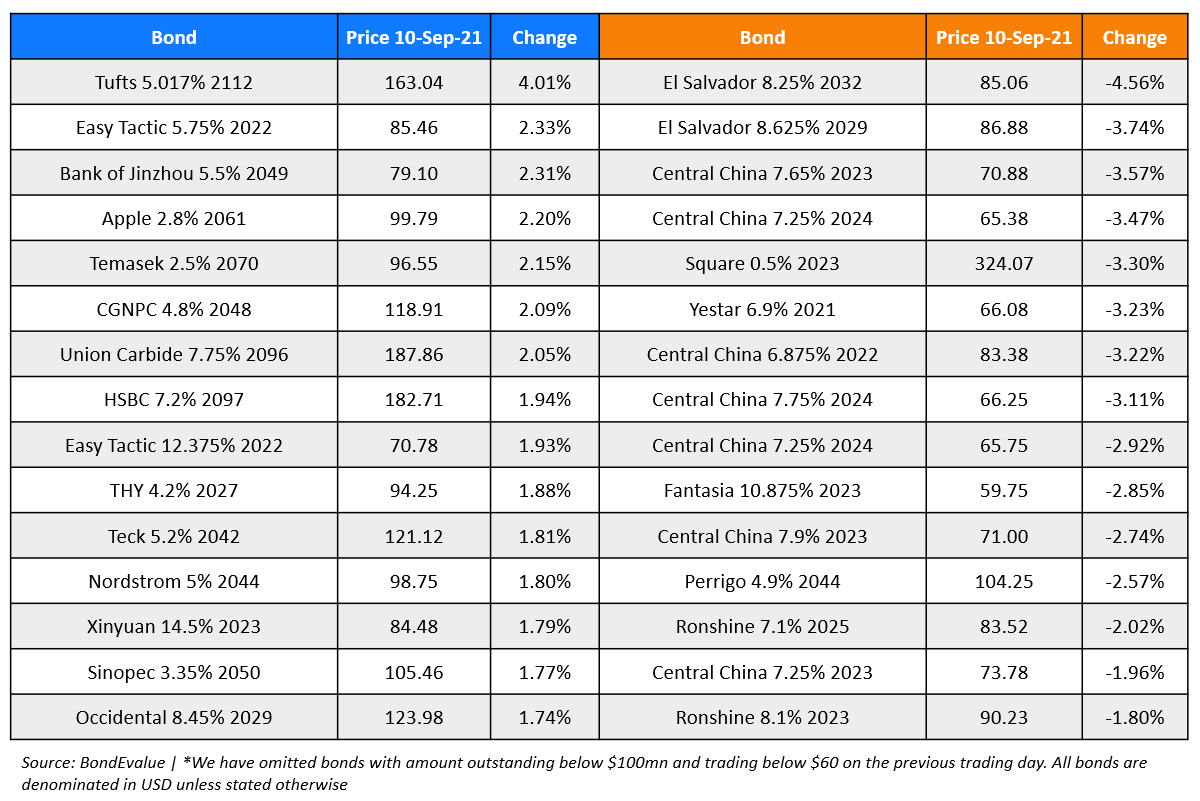