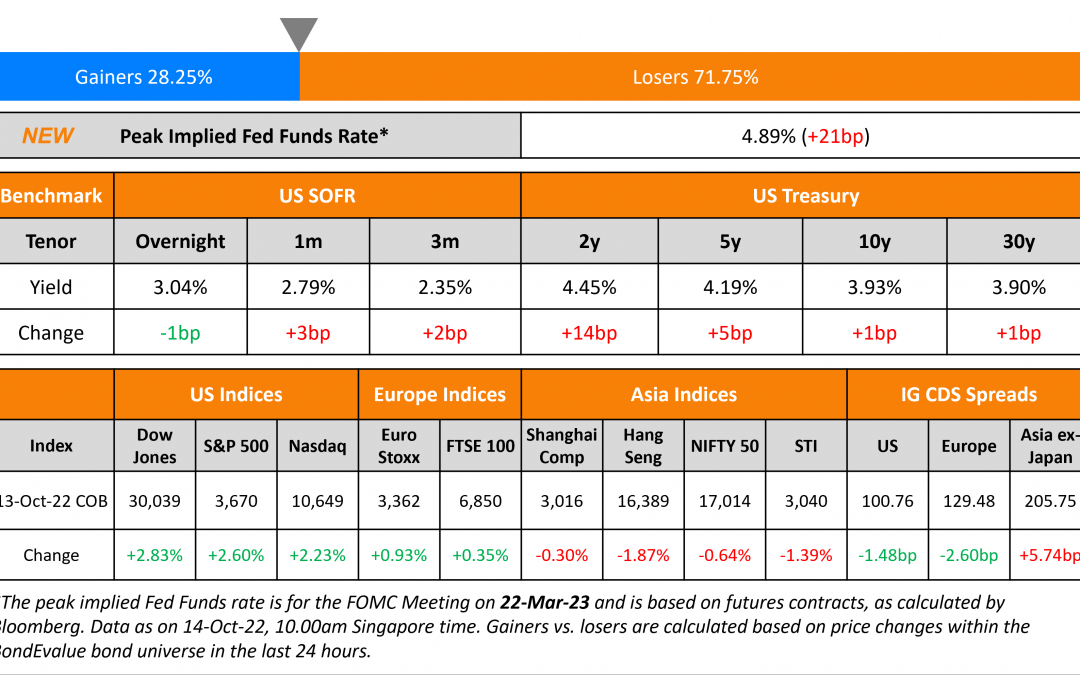 The higher than expected CPI print pushed short-end Treasury yields higher with the 2Y up 14bp to 4.45%. US CPI YoY for September came in at 8.2%, higher than expectations of an 8.1% print. Core CPI was at a 40Y high of 6.6%, above expectations of 6.5%. Analysts noted that stickier components like shelter inflation and service inflation rose in September, thus showing signs of a sustained pick-up in inflation. With this, the peak Fed Funds Rate rose by a solid 21bp to 4.89% for the FOMC’s March 2023 meeting. The inflation report has all but confirmed a 75bp rate hike by the Fed in its November 2 meeting. After the CPI print, probability of a 75bp hike in the December 14 meeting have risen to 67% from just 7% a week ago. In the credit markets, US IG CDS spreads tightened 1.5bp and HY CDS spreads saw a 10.2bp tightening. US equity markets surprised on the upside after opening lower with the S&P and Nasdaq closing 2.6% and 2.3% in the green respectively.

As part of BlackRock’s earnings release, the world’s largest asset manager emphasized its view on bonds by laying out some calculations. They note that during 1995, an investor looking for a 7.5% yield could get the returns entirely from buying bonds. By 2005, a similar return required a 40% allocation to equities and 10% to alternatives. As rates progressed lower, in 2016, their math showed that the same returns would require an 85% allocation to equities and alternatives. Now, given the rapid rise in rates, the same return could be achieved with an 85% allocation to bonds, underscoring the attractiveness of bonds in the current environment. 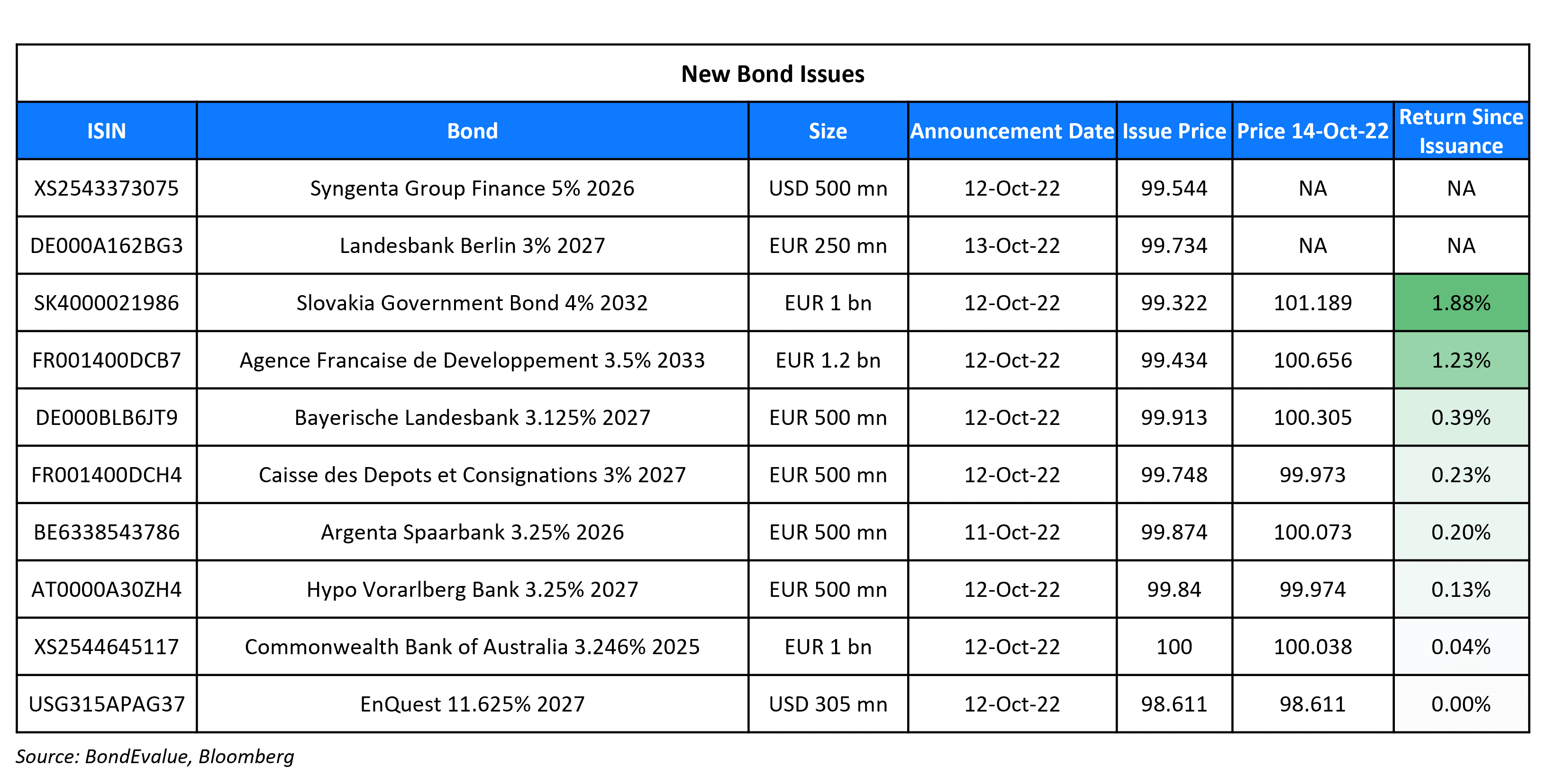 As the name suggests, this is the risk of bonds not getting called by the issuer. This is particularly significant in the case of far maturity bonds, Perpetual Bonds (Perps) and AT1s. While market participants often assume that Perps/AT1s will be called on their first call date, that is not always the case. There have been prominent cases in the past such as that of Santander and Deutsche Bank, which shocked the markets in 2019 and 2020 respectively when they did not call their AT1s on the first call date. More recently, Allianz decided to skip the call on its $1.5bn 3.875% Perp in February 2022, which led to a ~4 point fall in its price. Investors must thus account for non-call risk when investing in such bonds.

Andrew Brenner, the head of international fixed-income at NatAlliance Securities

“There can’t be anyone left in the market who believes the Fed can raise rates by anything less than 75bps at the November meeting. In fact, if this kind of upside surprise is repeated next month, we could be facing a fifth consecutive 0.75% hike”

“This report raises the risk that we may see a new cycle high in headline inflation before the end of the year. With energy prices moving back up, a mid-90s oil price in December could see us surpass the 9.1% headline peak from June.”

“Stronger report on headline and core so the market move makes sense. The market pricing for the terminal rate was 4.66% before the report, now at 4.7% and this can keep nudging higher”

On Asian Economies Running Out of Fiscal Space – IMF

“Public and private debt dynamics are already worse following the pandemic because of slower growth, rising rates and higher debt levels… Large depreciations and rising interest rates could trigger financial stress in countries with high leverage among non-financial corporates and households as well as unhedged balance sheets and those facing refinancing risks.” 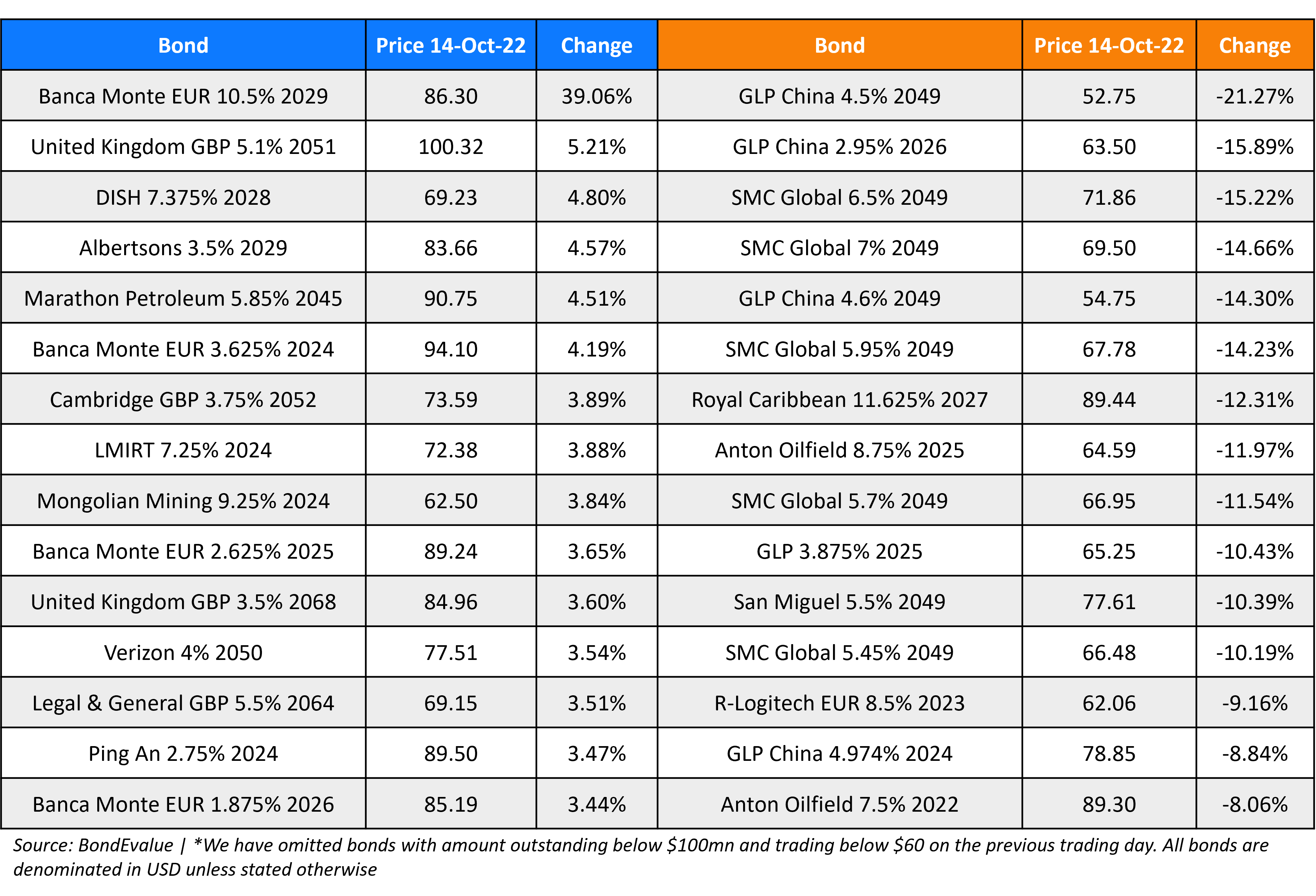