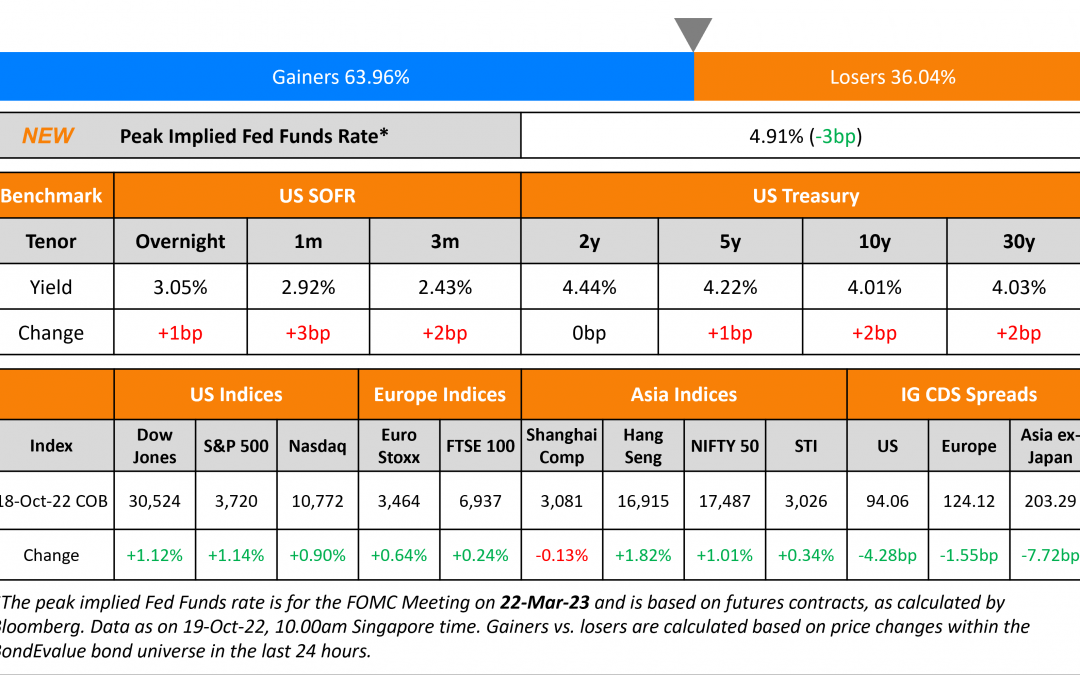 US Treasury yields rose slightly with the 10Y yields up 2bp to 4.01%. The peak Fed Funds Rate was down 3bp to 4.91% for the FOMC’s March 2023 meeting. In the credit markets, US IG CDS spreads tightened 4.3bp and HY CDS spreads saw a 20bp tightening. US equity markets saw a second consecutive day higher on Tuesday with the S&P and Nasdaq up 1.1% and 0.9% respectively.

Morgan Stanley raised €2.75bn via a two-tranche deal. It raised

The senior unsecured bonds have expected ratings of A1/A-/A. Proceeds will be used for general corporate purposes.

Carnival raised $2bn via a 5.5NC2.5 bond at a yield of 10.75%, 75bp inside initial guidance of 11.5% area. The bonds are senior to its unsecured notes and second priority to secured, with expected ratings of B2/B+. Proceeds will be used to temporarily repay amounts outstanding under the company’s revolver debt and for general corporate purposes. The new bonds are priced 315bp wider to its existing first lien 4% 2028s that yield 7.6% and 625bp tighter to its 6.65% senior unsecured notes due 2028 that yield 17%. The new bond’s coupons are at 11.5%, higher than its existing bonds’ coupons.

These are bonds issued by companies to specifically fund projects with social benefits (new/existing), which should be mentioned in the prospectus. ICMA’s social bond principles set out a standard covering four elements as follows:

Examples of projects for social bonds include affordable housing, socioeconomic empowerment, essential service access and projects of their like. The European Commission is planning to issue €100bn worth of social bonds, proceeds of which will be disbursed to member states for projects related to employment work schemes. Shriram Transport Finance has launched an offer to buyback up to $250mn of its 5.1% social bonds due 2023.

On Wall Street Credit Traders Head for Worst Year Since 2012

“This year feels especially challenging in light of the excellent revenue environment we saw in 2020 and 2021. When revenue pools contract we tend to see banks think more critically about personnel needs”

“These total return funds are actively managed with the ability to go low in terms of maturity duration, but they all seem to be chasing ‘index-plus’ performance as opposed to ‘total return’ management… have lost their total return ‘charter,’ or vision, of what such funds should offer to investors in the form of capital preservation”

On reasonable chance of U.S. recession in 2023

“There’s a reasonable chance of a recession in the U.S., but it’s not certain. I could still see a scenario with a soft landing.”

“Fitch expects the U.S. economy to enter genuine recession territory — albeit relatively mild by historical standards — in 2Q23… The projected recession is quite similar to that of 1990–1991, which followed similarly rapid Fed (Federal Reserve’s) tightening in 1989–1990”