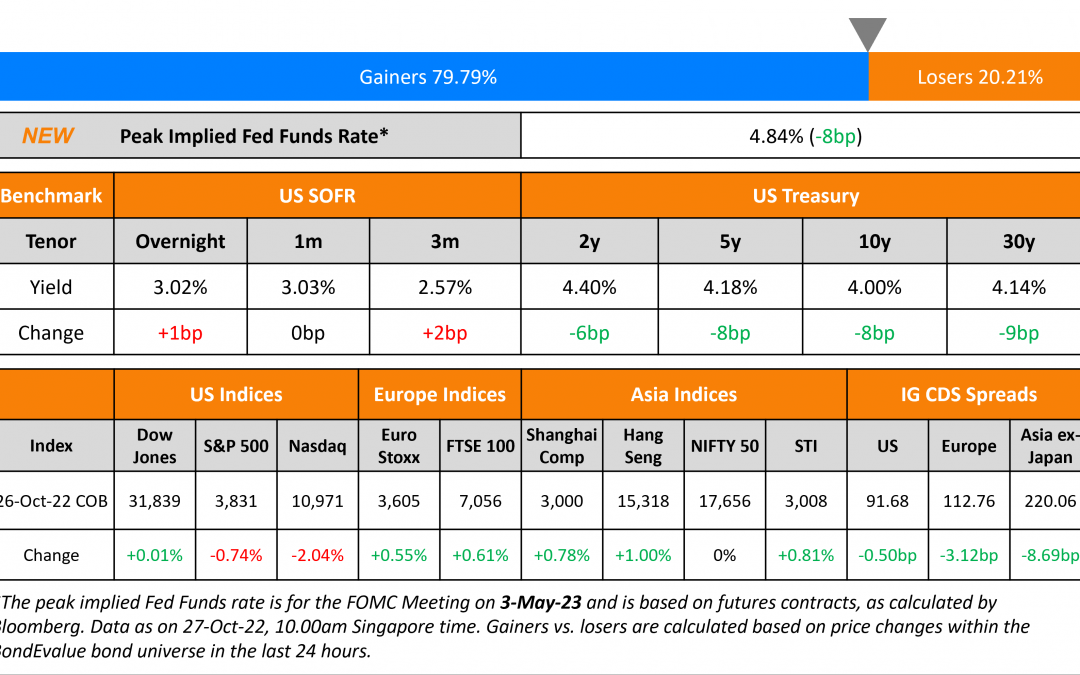 Treasuries rallied across the curve again on Wednesday with yields moving 6-9bp lower. The peak Fed Funds rate dropped by 8bp to 4.84% for the May 2023 FOMC meeting, continuing its downward move as high frequency soft data like the Markit PMIs indicated a slowdown in economic activity. While a 75bp hike has been priced in for the November meeting, markets are now expecting a 55% probability for a 50bp hike in its December meeting and a 39% chance of a 75bp hike. The probability of a 75bp hike in December has dropped from 77% a week ago. In the credit markets, US IG CDS spreads tightened by 0.5bp and HY CDS spreads saw a 2.4bp tightening. US equity markets sold-off on Wednesday, reversing the prior day’s gains, with the S&P and Nasdaq down 0.7% and 2% respectively. 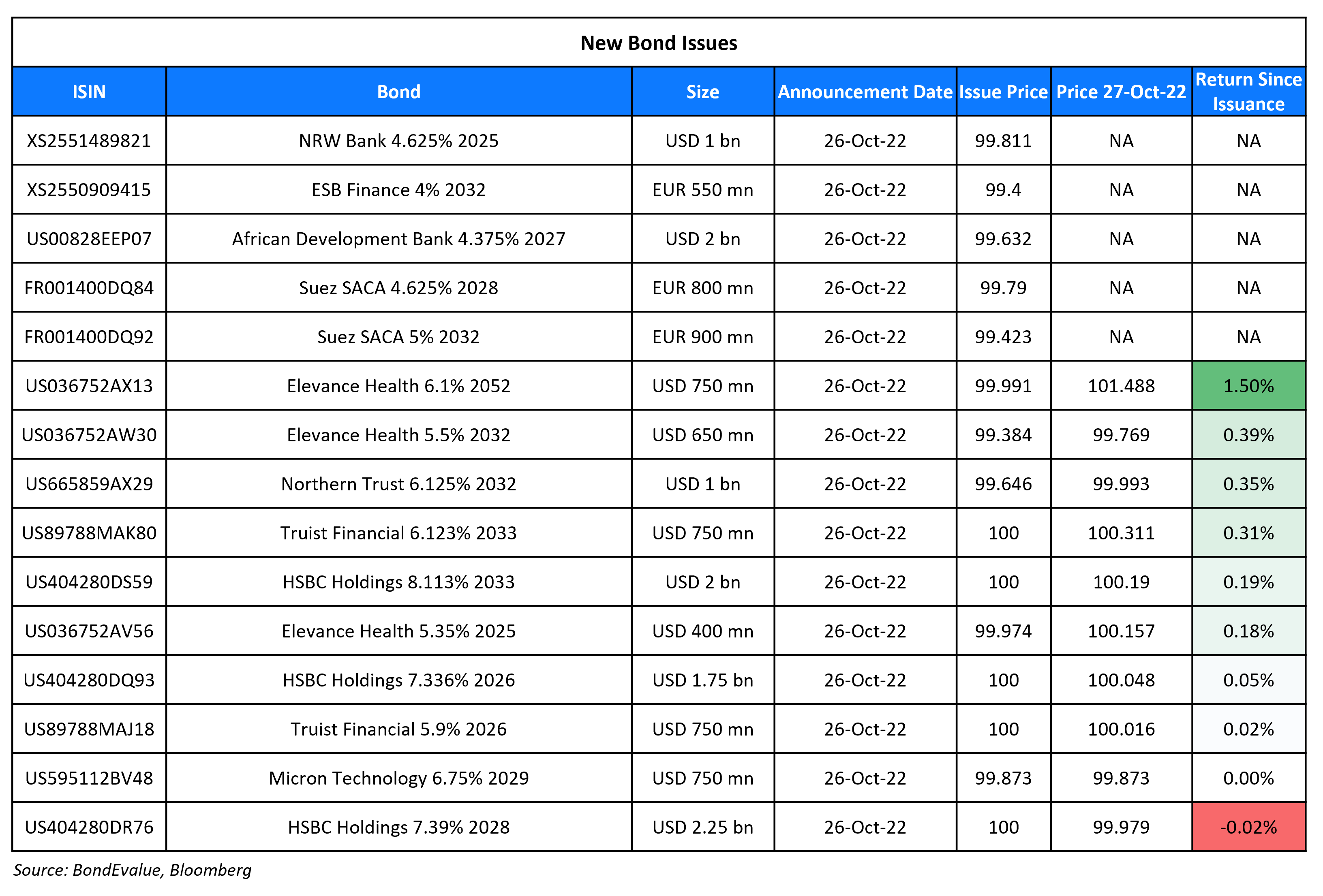 HSBC raised $6bn via a three-tranche deal. It raised

Proceeds will be used for general corporate purposes, and to strengthen capital base pursuant to the UK Capital Requirements Regulation (CRR).

Northern Trust raised $1bn via a 10Y bond at a yield of 6.173%, 25bp inside initial guidance of T+240bp area. The subordinated notes have expected ratings of A2/A/A.

Amend and Extend is a debt/loan market jargon referring to a strategy where issuers negotiate with lenders to extend the maturity date of part of an existing loan facility instead of selling new high-yield debt for refinancing purposes. Lenders negotiate for higher fees and interest rate margins to be compensated for the delay by issuers.

Bloomberg notes that junk-rated companies are using this “amend and extend” tactic to continue their existing deals without having to refinance at much higher yields.

“It goes back to striking the right balance between letting the exchange rate depreciate to absorb the shock; not to fight it, not to fight the market movements too much… If the dollar appreciates much more rapidly than this, then yes, we do have to be concerned”

Gregory Faranello, head of US rates trading and strategy at AmeriVet Securities

“We are certainly in territory with the Fed’s official barometer of the yield curve that will raise concerns. The Fed will definitely watch this, and there is a sense in the bond market that they will soon throttle back the pace of rate hikes and take a step back.”

“It will be difficult for the Fed not to overtighten as inflation will lag the economy and they are so focused on slaying the inflation dragon. It’s a time for sticking with quality bonds and we have no problem extending duration in Treasuries… Our duration was shorter than the index for most of the year and we began getting closer to neutral a month ago when the 10-year was around 3.55%”

“he ECB is still in catch-up mode… We think there is now a comfortable majority for taking rates into restrictive territory.”

“The optics are bad against the backdrop of a historical shock to households’ income, and political pressure cannot be ignored… Note that some countries have implemented a windfall tax on bank profits for similar reasons” 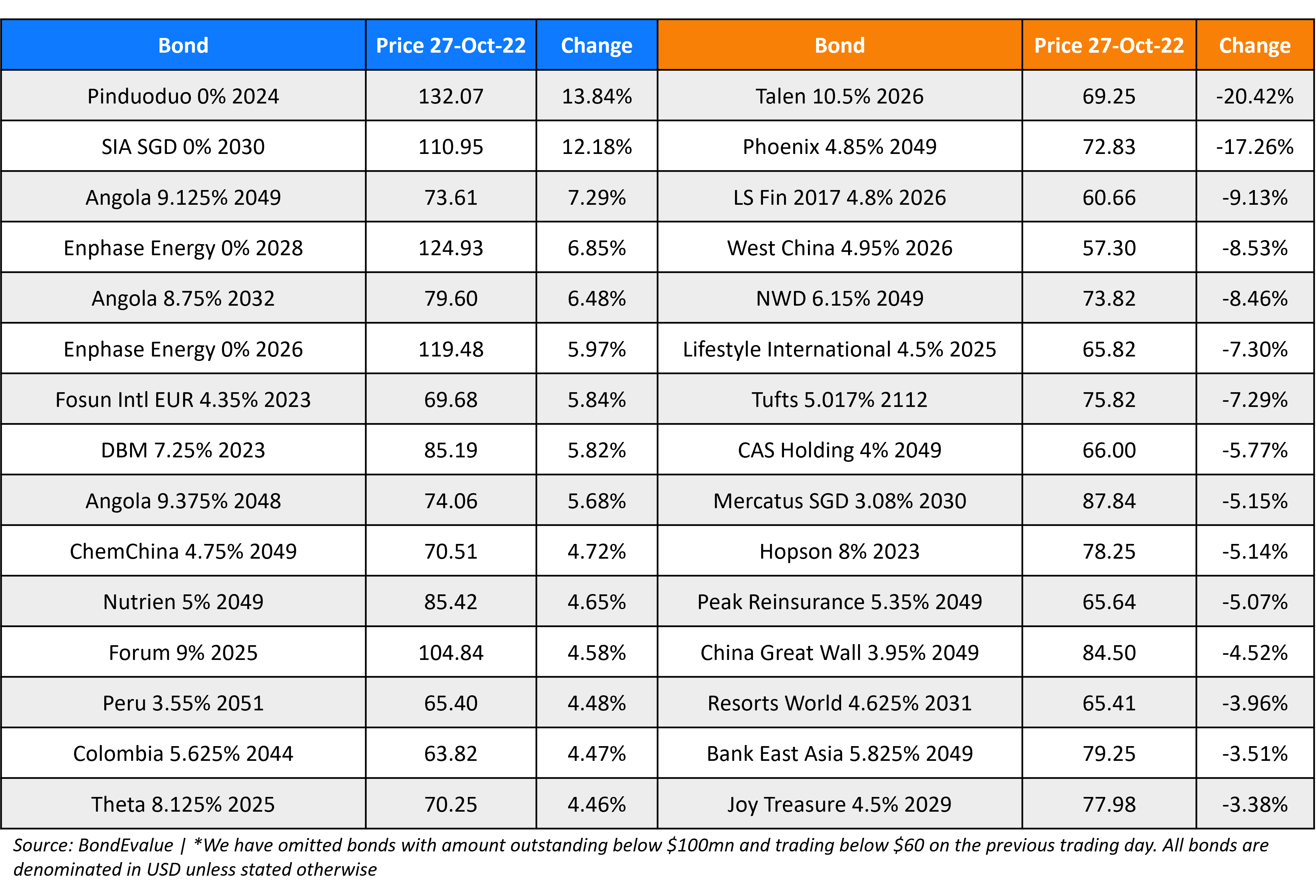