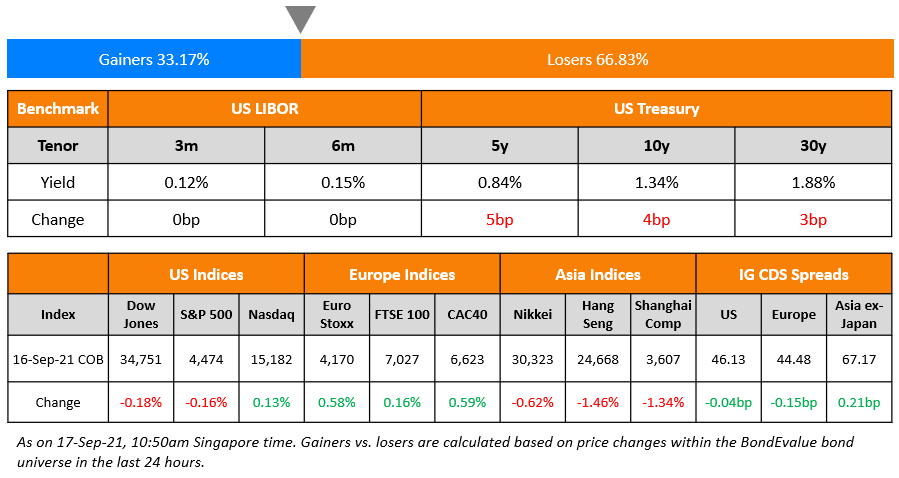 US markets ended mixed with August retail sales coming higher while the weekly jobless claims increased slightly – Nasdaq ended 0.1% higher while S&P finished 0.2% lower. Eight out of eleven sectors ended in the red. Materials and Energy down more than 1%, led the losses while Consumer Discretionary up 0.4% contributed to the gains. European stocks finished higher – CAC closed the day 0.6% higher while DAX and FTSE were up 0.2% each. Brazil’s Bovespa added another 1.1% to the week’s losses. In the Middle East, UAE’s ADX and Saudi TASI gained 0.8% and 0.1% respectively. Asian markets have started mixed as investors keenly watch HSI which has already dropped 6% in the week – HSI was down 1.5% in early trade, Shanghai and Singapore’s STI were down 0.1% while Nikkei was up 0.3%. US 10Y Treasury yields added another 4bp reaching 1.34%. US IG and HY CDX spreads tightened 0.04bp and 0.1bp respectively. EU Main CDS spreads were 0.2bp tighter and Crossover CDS spreads tightened 1.7bp. Asia ex-Japan CS spreads tightened 0.2bp. 0.4bp. Asia ex-Japan CDS

US retail sales for August 2021 were up 0.7% MoM, much better than estimates of a decline of ~2%, indicating resilient demand. The gain came despite a sharp 3.6% drop at motor vehicle and parts dealers amid ongoing shortages and supply chain issues. That resulted in a 1.8% rise in retail sales ex-auto. Meanwhile, the latest unemployment insurance weekly data showed a 332k increase in jobless claims last week vs. estimates of 320k.

Want to Learn About Bonds? Join Us for The Upcoming Bond Masterclass 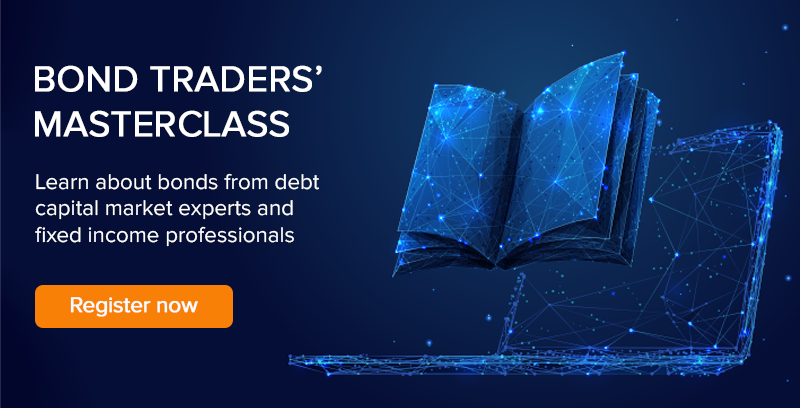 All attendees will receive a 1-month complimentary Premium subscription to the BondEvalue App, a certificate, presentations materials as well as 14-days access to webinar recordings to re-watch the sessions. 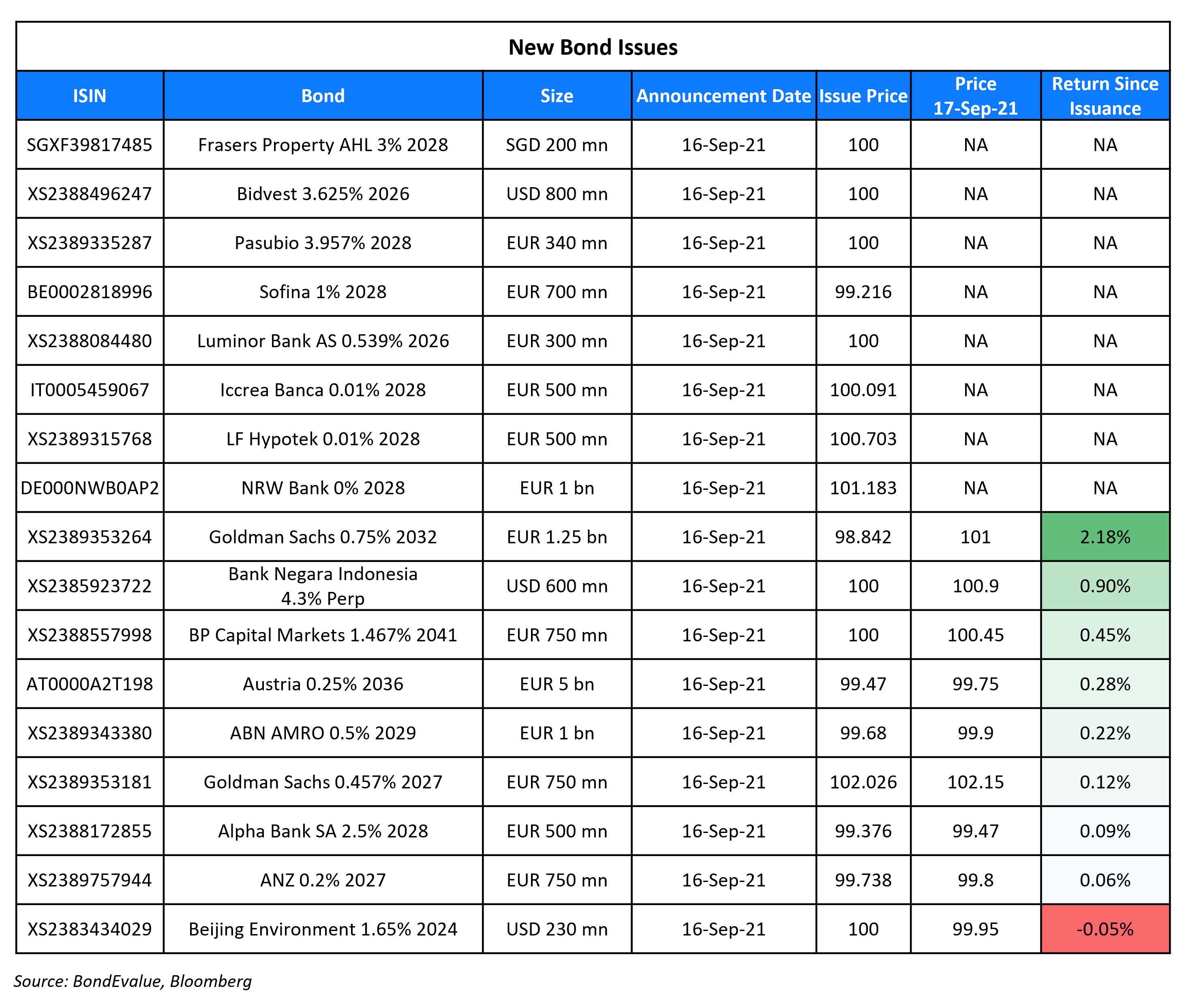 ICBC raised over $6bn via a PerpNC5 AT1 deal priced on Thursday. Scroll for details of the issuance.

Frasers Property AHL raised S$200mn via a 7Y sustainability bond at a yield of 3%, 25bp inside the initial guidance of 3.25%. The bonds are unrated, and received orders over S$400mn, 2x issue size. Proceeds will be used for financing or refinancing of new or existing qualifying projects under Frasers Property Australia’s sustainable finance framework. Singapore accounted for 95% with others making up 5%. Private banks took 74% of the deal, while asset managers and hedge funds took 24% and corporates took 3%.

Bank Negara Indonesia raised $600mn via a Perp NC5.5 AT1 bond at a yield of 4.3%, 40bp inside the initial guidance of 4.7% area. The bonds have expected ratings of Ba3 (Moody’s), and received orders over $2.95bn, 4.9x issue size. Proceeds will be used to replenish AT1 capital and to optimise the bank’s long-term fund structure as well as for general funding purposes to strengthen the bank’s capital base and loan disbursements. The bond has a first call date on 24 March 2027, and if not called, will reset on 24 March 2027 to the US 5Y Treasury + 346.6bp. The AT1s have a dividend stopper, and will be written down permanently if Indonesia’s Financial Services Authority deems the bank would fail without an injection of public funds or a writedown.

Ayala raised $400mn via a Perp NC5 bond at a yield of 3.9%, 40bp inside the initial guidance of 4.3% area. The unrated bonds received orders over $1.75bn, 4.4x issue size. Proceeds will be used to refinance its existing dollar bonds. The bonds will be issued by wholly owned subsidiary AYC Finance and guaranteed by Ayala. The bond will have non-deferrable coupons and will not have equity accounting treatment.  Asia, excluding the Philippines, took 67%, the Philippines 31% and EMEA 2%. Asset managers and fund managers bought 52%, banks and financial institutions 26% and private banks and corporates 22%.

Yincheng International raised $110mn via a 364-day bond at a yield of 13.75%, unchanged from final guidance. The bonds have expected ratings of B+ by local credit rating agency Lianhe Global. The new bonds are priced 64bp wider to its existing 11.8% Mar 2022s that yield 13.11%.

As the name suggests, convertible bonds are debt instruments issued by a company where the bonds can be converted into equity shares of the company by the bondholders at a particular ratio and at particular points in time. Thus, it is a hybrid security as it has characteristics of both debt and equity. Convertibles generally carry a lower coupons and sometimes tax advantages for the issuer.

“Regulators are trying to deal with the amount of leverage among developers, and there is no pain-free way to do that…If they push too hard, then it can become destabilizing”

“Markets should be prepared for what could be a much worse-than-expected growth slowdown, more loan and bond defaults, and potential stock market turmoil”

“We will have to see what happens…They are probably working on a deal in the background, but we don’t have any clarity and we don’t really have any precedents, so it is uncharted water. It remains to be seen the scale of loss that investors will face.”

On the nightmare Evergrande scenario

“As a systemically important developer, an Evergrande bankruptcy would cause problems for the entire property sector. Debt recovery efforts by creditors would lead to fire sales of assets and hit housing prices. Profit margins across the supply chain would be squeezed. It would also lead to panic selling in capital markets”

“The government has to be very, very careful in balancing support for Evergrande. Property is the biggest bubble that everyone has been talking about in China. So if anything happens, this could clearly cause systematic risk to the whole China economy.”

Fraser Howie, an independent analyst and co-author of books on Chinese finance

“Given that the bulk of people’s wealth is already in property, even a 10% correction would be a serious knock to many people…It would certainly knock their hopes and dreams and expectations about what property is.”

“The U.K. green bond framework is the first one we consider not to be green enough according to our standards… We have a serious problem with these types of projects because we don’t think carbon capture projects will add to carbon reduction in the end…We have had doubts and questions with other green bond frameworks, for instance the Belgium one, but after consulting with them we decided to give them the benefit of the doubt. The U.K.’s allocation to carbon capture solutions makes this not possible.” 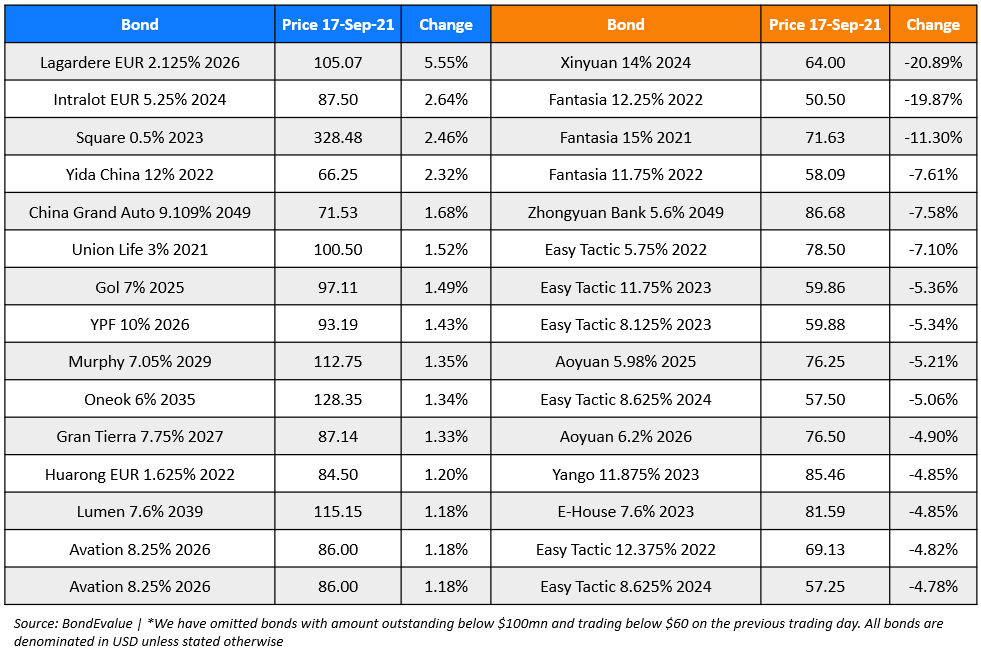