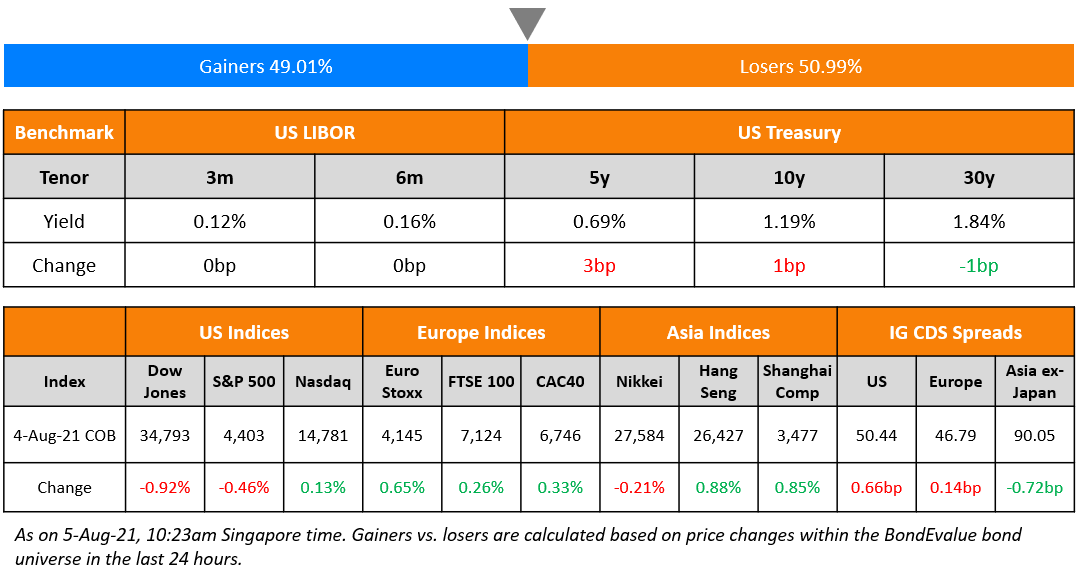 US markets had a mixed day with the S&P shedding 0.5% while Nasdaq added 0.1% as US payroll data missed estimates. Energy was down 2.9% and Industrials and Consumer Staples were down more than 1%. Communication Services and IT, up 0.2% provided some support. European markets touched new highs –  DAX was up 0.9% and FTSE and CAC were up 0.3% each. Saudi’s TASI and UAE’s ADX were down 0.4% each. Brazil’s Bovespa fell 1.9%. Asia Pacific stocks have had a mixed start  – Nikkei and HSI are up 0.2% to 0.3% while Shanghai and Singapore’s STI are down 0.1% to 0.5%. US 10Y yields rose 2bp to 1.19%. Several earnings reports were released on Wednesday with Commerzbank and Royal Caribbean posting net losses while GM, Petrobras, DBS reported strong numbers (details below).US IG CDS widened 0.7bp and HY spreads widened 2.7bp. EU Main and Crossover spreads also widened 0.1bp and 0.4bp respectively.  Asia ex-Japan CDS spreads were 0.7bp tighter.

ADP private payroll data posted an increase of 330k in private-sector jobs in July, against an estimate of 653k. IHS Markit Brazil Services Business Activity Index highlighted a second successive increase in output with a reading of 54.4 in July, up from 53.9 in June. It’s central bank raised interest rates by 100bp – the most since 2003, in an effort to contain rising inflation. Singapore’s PMI came in at 56.7 in July vs. 50.1 in June, indicating strong private sector growth. UAE’s PMI rose from 52.2 in June to 54.0 in July, pointing to a strong improvement in business conditions and growth in the non-oil economy, the highest in two years. Saudi Arabia PMI fell for the first time in four months to 55.8 in July, from 56.4 in June. 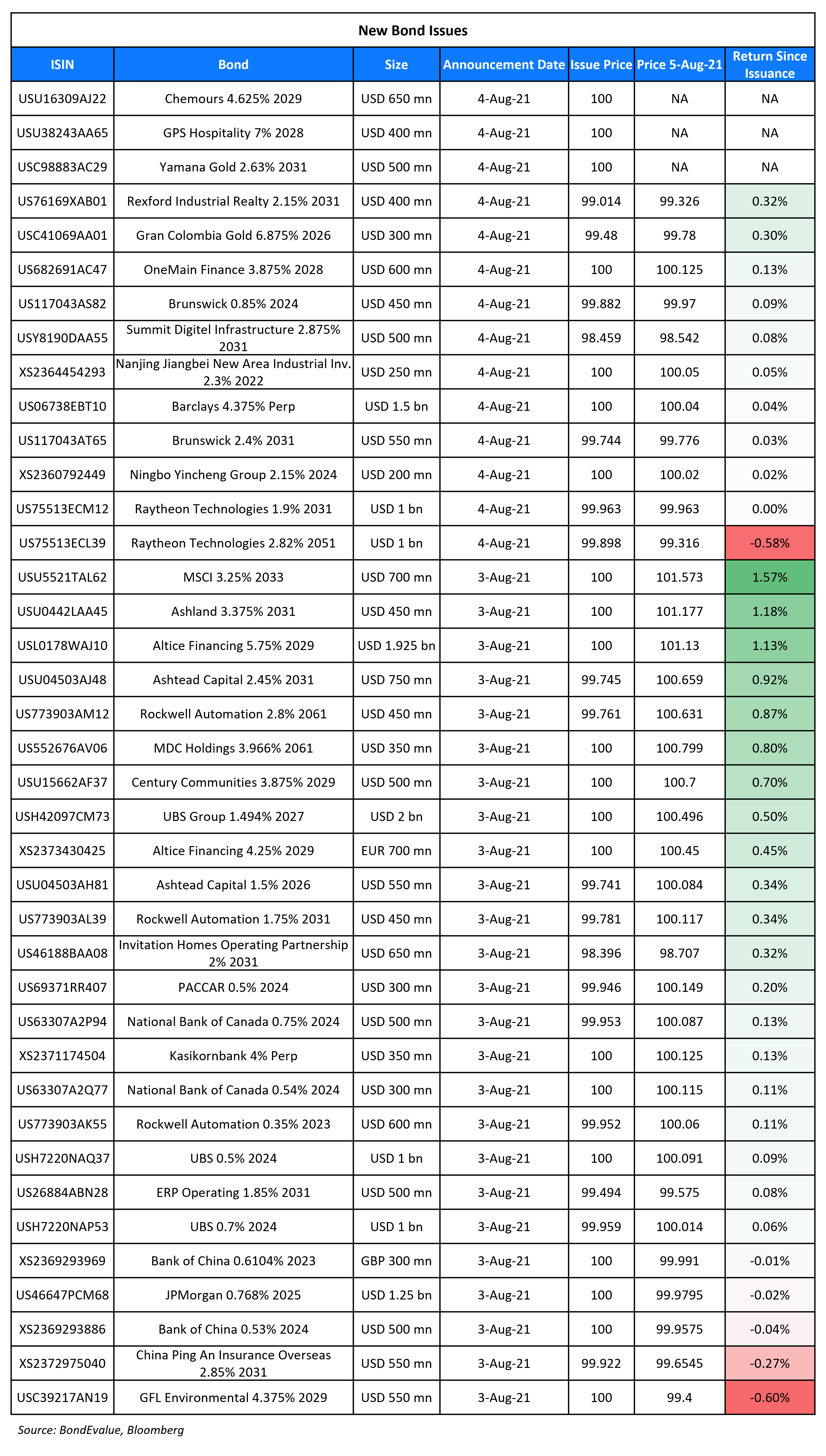 Barclays raised $1.5bn via a Perpetual non-call 7Y (PerpNC7) AT1 bond at a yield of 4.375%, 62.5bp inside initial guidance of 5% area. The SEC-registered bonds have expected ratings of Ba2/B+/BBB-. Coupons are fixed until the first reset date of  September 15, 2028) and if not called, resets every five years at the 5Y Treasury yield + initial margin of 341bp. The bonds are callable from and including March 15, 2028 to and including the first reset date (September 15, 2028) and any subsequent reset dates thereafter. The trigger event occurs if at any time the fully loaded CET1 Ratio (as defined in the Preliminary Prospectus Supplement) is less than 7.00%. Proceeds will be used for general corporate purposes of the issuer and/or subsidiaries/group and to strengthen further the capital base.

Summit Digitel Infrastructure raised $500mn via a 10Y bond at a yield of 2.875%, 25bp inside initial guidance of T+215bp area. The debut dollar bonds have expected ratings of BBB-/BBB- and received orders over $1.1bn, 2.2x issue size. US investors took 44%, Europe 32% and Asia 24%. Fund/asset managers bought 77%, insurers 20% and private banks and others 3%. Proceeds will be used for capital expenditure, debt repayment and/or any other purpose in compliance with ECB end-use guidelines.

Ningbo Yincheng Group raised $200mn via a 3Y bond at a yield of 2.15%, 55bp inside initial guidance of 2.7% area. The bonds have expected ratings of Baa3/BBB and received orders over $1.65bn, 8.25x issue size. Asia Pacific investors bought all the bonds. Banks and financial institutions took 82%, asset managers, fund managers and hedge funds 17% and insurers 1%. Proceeds will be used for onshore debt refinancing and liquidity replenishment. Ningbo Yincheng is the largest LGFV by asset size in the Yinzhou district.

Equity Interest Purchase Undertaking (EIPU) is a deed where an onshore parent agrees to purchase equity interest in their offshore subsidiary. This purchase acts as a way of transferring funds offshore with the proceeds going to service interest and principal payments on the bond. This is different from guarantees. In China for example, guarantees require registration and approval from State Administration of Foreign Exchange (SAFE), but keepwells and EIPUs/asset-purchase deeds do not. EIPUs generally come as part of keepwell deeds.

On the US Treasury expecting to announce bond sales cut as early as November
In a statement by the US Treasury
“Continuing current issuance sizes and patterns may provide more borrowing capacity than is needed to address borrowing needs over the intermediate-to-long term.”
Thomas Simons, Jefferies economist
“This is the only logical outcome given the information they have.” “Without more clarity on infrastructure or the debt ceiling, they can’t make any additional changes.”

“I’m looking for continued progress in the labor market, continued putting COVID behind us, rising vaccination rates, the things that are so fundamental to us saying that the economy has achieved that metric of substantial further progress.” “Right now my modal outlook is that we will achieve that metric later this year or early next.” “If we don’t keep up with it, then it could definitely slow the rate of growth in our economy,” she said. “Right now I don’t expect it to derail the recovery of the United States, but it’s already very seriously interrupting the recoveries in the global economy, and that in itself is a headwind on U.S. growth.”
On Fed officials sketching out conditions for scaling back monetary support
Christopher Waller, Fed governor
“I’m not saying we would, but if we wanted to, we need to have some policy space by the end of the year,” he said.
Richard Clarida, vice-chair of the US Federal Reserve
“If the outlook for inflation and outlook for unemployment I summarised earlier turn out to be the actual outcomes for inflation and unemployment realised over the forecast horizon, then I believe that these three necessary conditions for raising the target range for the federal funds rate will have been met by year-end 2022.” “There are risks to any outlook, and I believe that the risks to my outlook for inflation are to the upside.” he added.
Lael Brainard, Fed governor
“I expect to be more confident in assessing the rate of progress once we have data in hand for September, when consumption, school, and work patterns should be settling into a post pandemic normal,” she said. 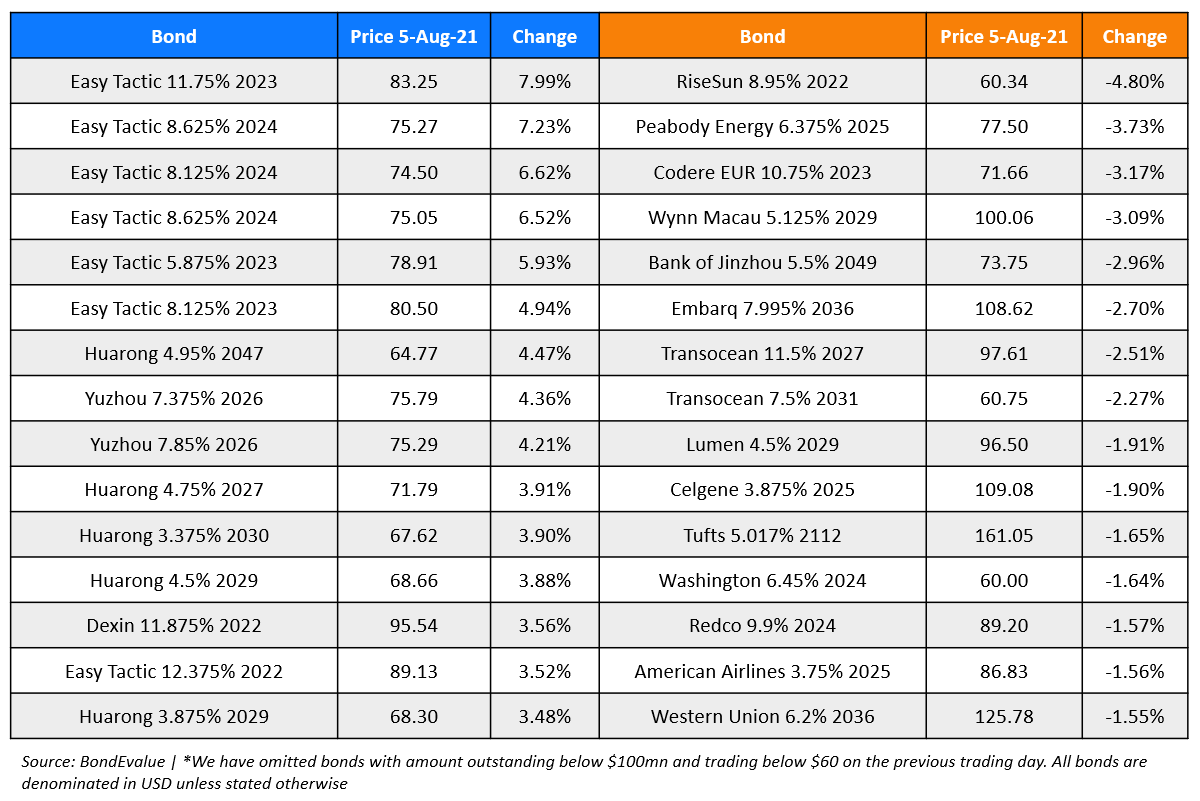