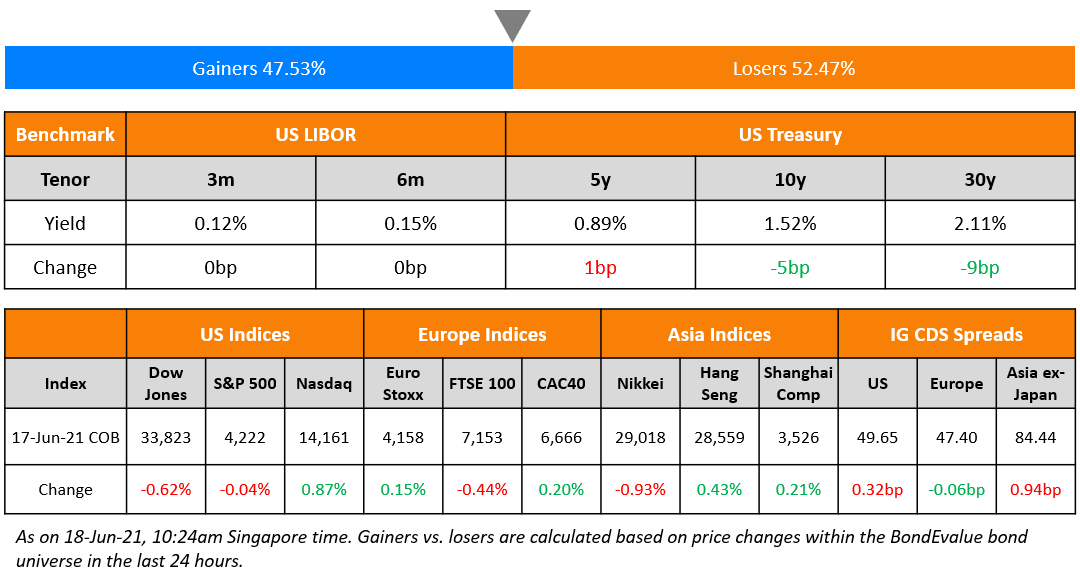 S&P nudged marginally lower while Nasdaq made a recovery of 0.9%. While Energy and Financials were down over 3%, IT and Healthcare were up 1.2%, and 0.8% helping the indices. US 10Y Treasury yields dipped 5bp to 1.52%. European markets remained cautious – DAX and CAC were up 0.1% and 0.2% respectively while FTSE was down 0.4%. US IG CDS spreads widened 0.3bp while HY CDS tightened 0.3bp. EU main and crossover CDS tightened 0.1bp and 0.2bp respectively. Saudi TASI was largely flat while Abu Dhabi’s ADX was down 0.8%. Brazil’s Bovespa was down 0.9%. Asian markets have a mixed start with Shanghai flat and HSI up 0.8%. Asia ex-Japan CDS spreads were 0.9bp wider. 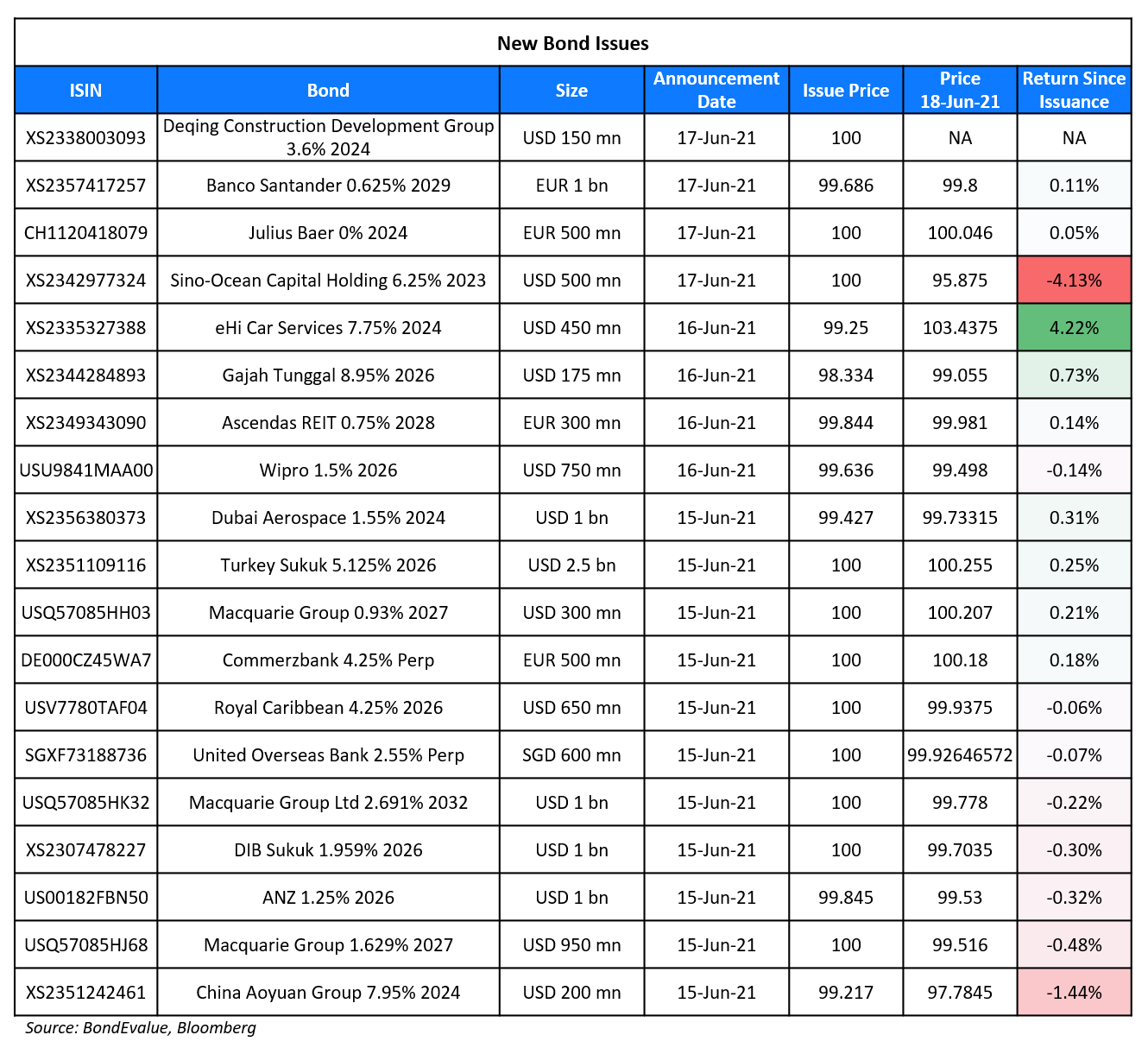 Sino-Ocean Capital Holding raised $500mn via a 2Y bond at a yield of 6.25%, 25bp inside initial guidance of 6.5% area. The bonds were unrated and received orders over $1.5bn, 3x issue size. The bonds will have a letter of support from Chinese property developer Sino-Ocean Group Holding (Baa3/BBB–) which indirectly owns 49% of Sino-Ocean Capital. Proceeds will be used for project investment and development, and for general corporate purposes.

Deqing Construction & Development Group raised $150mn via a 3Y bond at a yield of 3.6%, 50bp inside initial guidance of 4.1% area. The bonds were unrated. Proceeds will be used for domestic project construction, working capital and general corporate purposes.

Floating Rate Bonds are also known as floaters or FRNs (floating rate notes). These are bonds with a variable interest rate unlike fixed rate bonds. Floaters are considered attractive for investors in a rising interest rate environment since the interest rate/coupon gets re-adjusted periodically (semi-annually/quarterly etc.), linked to benchmark rates such as SOFR or LIBOR. For example, as part of Verizon’s $25bn jumbo 9-part issuance, they issued two floaters – a 0.52% 2024 at SOFR + 50bp and a 0.81% 2026 at SOFR + 79bp. Bloomberg reports that US IG issuance of floaters have seen a sharp rise this year.

On yield on 30-year treasuries tumbling as curve continues to flatten
George Goncalves, head of U.S. macro strategy at MUFG Securities Americas
“Fed credibility as an inflation fighter looks to have green-lighted those worried about buying long duration as an investment to potentially counter-balance other more riskier positions in their portfolios.”
In a note by Praveen Korapaty, chief rates strategist at Goldman Sachs Group Inc and his team
The net results of the Fed’s actions should “be sufficient to tilt the bias of intermediate versus longer-term yield curves toward flattening on better-than-expected data.”
On yield curve flattening after Fed signals possibility of earlier rate hikes
Randall Kroszner, former Fed Governor
“The 10-year rate has actually come down over the last few weeks rather than going up.” “So, that suggests the Fed is credible, the Fed is being believed when they say this is transitory, and they will act when they need to.”
Tim Johnson, BNP Paribas Asset Management head of global multi-sector fixed income
“What I think is happening now is the market is really digesting this transition, this change,” Johnson said.
Ellen Gaske and Robert Tipp of PGIM Fixed Income
“The sell-off in Treasury yields since March 2020 has already left a substantial buffer—a ‘pricing in’—of Fed rate hikes, giving us reason to believe that any further sell-off in Treasuries should be limited,” Gaske and Tipp said.

Frederik Ducrozet, Pictet Wealth Management strategist
“The spike in yields is not amplified this time around because positioning is cleaner and the fundamentals have not changed – the Fed will be buying bonds for a long time.”
Josh Lohmeier, Aviva’s head of north American investment grade credit
“There’s structural demand out there that is not insignificant.”
On Asian and European credit emerging unscathed by more hawkish Fed
Juan Valencia, credit strategist at Societe Generale SA
“Corporate fundamentals remain very, very solid and this should help credit spreads to be relatively immune to sovereign bond yield moves.” “I don’t think this would be the start of a sustainable widening trend and expect any impact to be short lived.”
Michal Jezek, credit strategist at Deutsche Bank AG
“The impact on European credit should be more indirect and be primarily driven by the global QE factor that will become a headwind for risk assets once the Fed taper debate gets going.”
Paul Lukaszewski, head of corporate debt for Asia Pacific at Aberdeen Standard Investments
“While the market is surprised with the hawkish pivot by the Fed, the forces driving Asian credit at the time remain primarily idiosyncratic.” “Asia markets are pricing in healthy amounts of downside and uncertainty while U.S. markets are back to cyclical tights and priced to perfection. We see this as a very
attractive time for global investors to allocate to the region.”
On China’s new shadow banking rules signalling fresh push to clamp down systemic risk
Bruce Pang, head of macro and strategy research at China Renaissance
“China’s latest policies have started slowing the pace of credit growth and cracking down on shadow banking as it seeks to normalize monetary policy and curb potential risks now that the economy’s recovery is gathering pace.” “We also expect the yields of cash wealth management products to be trimmed, considering the stricter and more explicit regulatory limits now in terms of credit quality, liquidity, maturity, concentration and leverage,” Pang said.
Iris Tan, senior equity analyst at Morningstar
“We expect a large part of the assets will mature by the [18-month] deadline. Thus, there should be no material impact on existing products. But we expect future product yields will be lower, given the change in investment assets. The rules are also likely to reduce demands for capital replenishment bonds in the market.”
Iris Pang, chief economist Greater China at ING Bank
“Regulators could follow this trend more closely from now on to examine the structure of the wealth management products and regulate the transparency of the structure.”
On China’s growth decoupling from credit with global implications
Li Cui, chief economist at China Construction Bank International
“The impact of credit growth on China’s growth cycle has faded in recent years as construction, the most credit intensive sector, is no longer the key source of demand drive.”
Gary Ng, economist at Natixis
“Faster profit growth and lower leverage mean the new economy has larger room to expand capital expenditure than the old sectors.” “The decline of potential growth in China can be delayed with a higher share of the new economy.”
Adam Wolfe, China economist at Absolute Strategy Research
“The link between credit growth and housing starts had already broken.” “That means the most credit-intensive sector in the economy is less sensitive to the credit cycle.”
Freya Beamish, China economist at Pantheon Macroeconomics
“In the current circumstances, I’m less worried than normal about slowing credit and money growth,” she said. 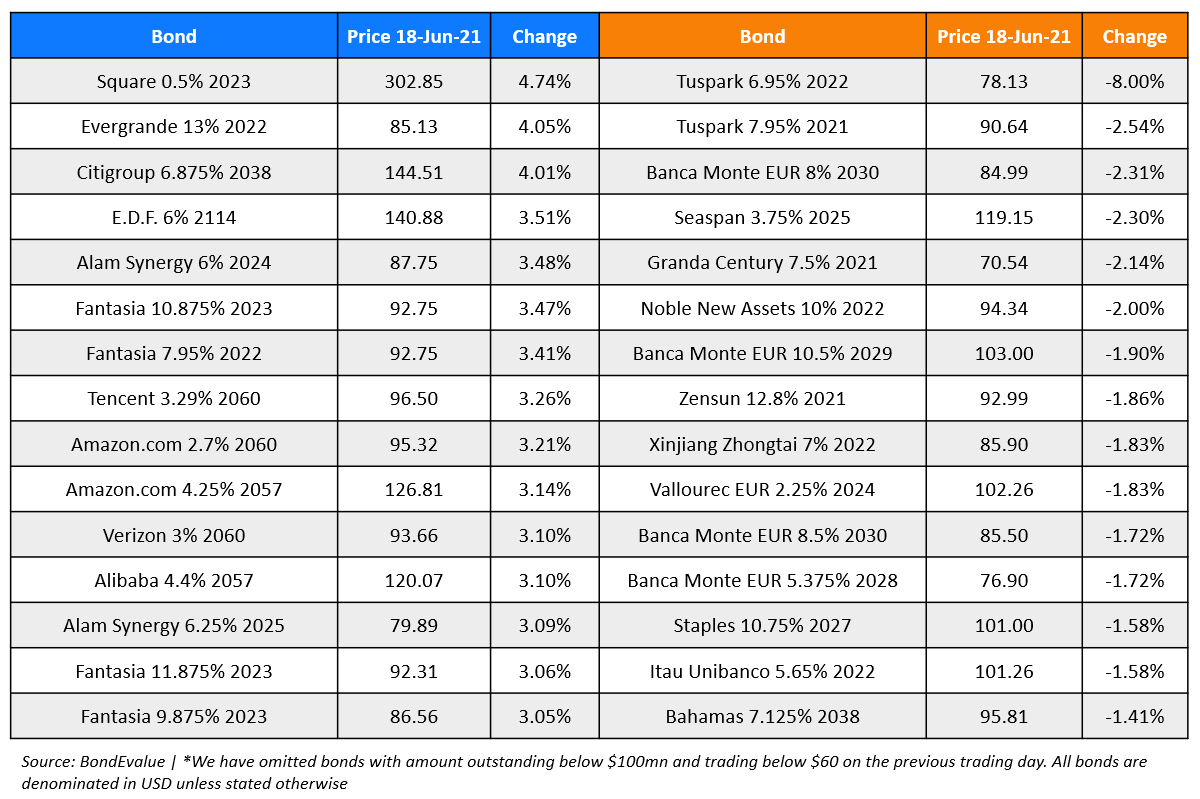