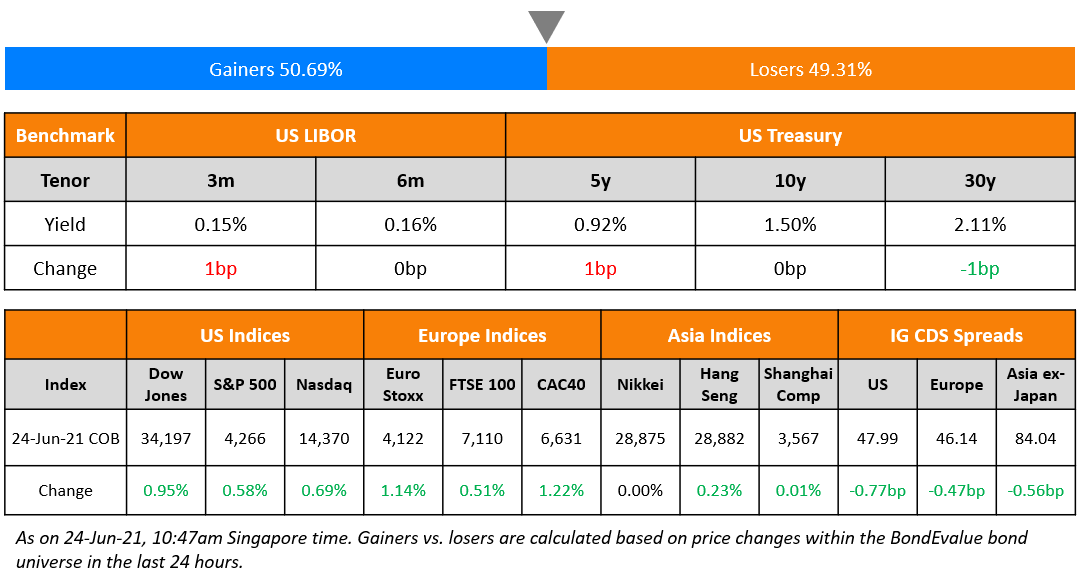 US Markets continued their advance for the third straight day scoring new records as Initial Jobless Claims for the prior week decreased by 7k to 411k against a forecast of 380k and vs 418k in the week before. S&P and Nasdaq were up 0.6% and 0.7% touching new highs. Financials up 1.2% led the gains. Tesla up 3.5% stood out among the corporates. US 10Y Treasury yields were flat at 1.5%. In Europe, Bank of England kept its monetary policy steady. European bourses returned to the green after a day in the red  – CAC, DAX and FTSE were up 1.2%, 0.7% and 0.5% respectively. US IG and HY CDS spreads tightened 0.8bp and 2.7bp respectively. EU main and crossover CDS tightened 0.5bp and 2.4bp respectively. Saudi TASI and Abu Dhabi’s ADX were up 0.2% and 1% respectively. Brazil’s Bovespa closed 0.9% up. Asian markets opened higher – Singapore’s STI up 1.4%, HSI up 1.2%, Nikkei and Shanghai up 0.8%. Asia ex-Japan CDS spreads were 0.6bp tighter. 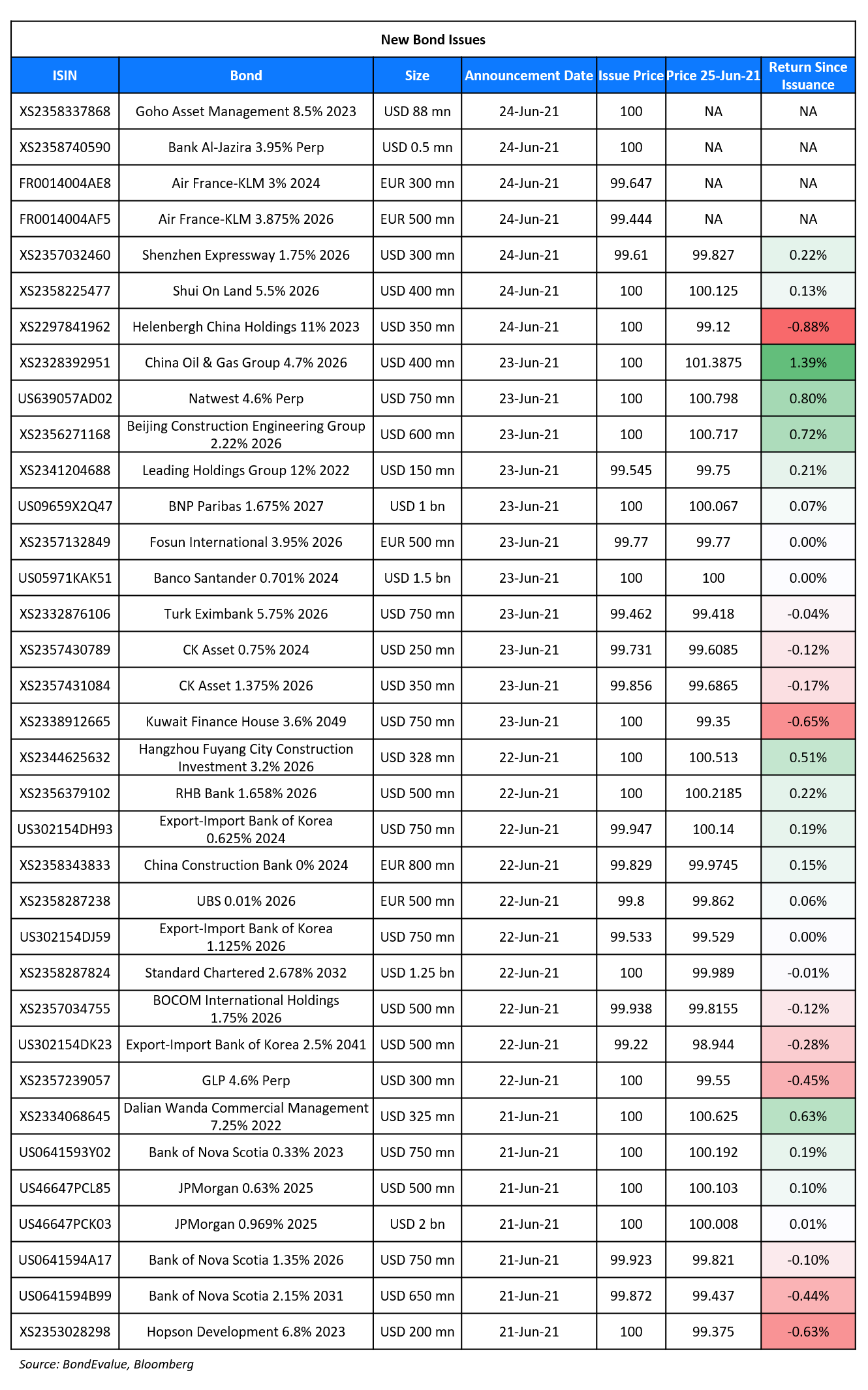 Shui On Land raised $400mn via a 5Y non-call 4Y (5NC4) sustainability-linked bond at a yield of 5.5%, 25bp inside initial guidance of 5.75% area. The bonds are unrated and received orders over $1.5bn, 3.8x issue size. ESG-oriented institutional investors took 34% of the deal, according to the official statistics. Asia took 96% and Europe 4%. Private banks took up a strong 47%, helped by a 25-cent rebate, and fund/asset managers booked the other 53%. IFR notes that Shui On Land has a big following from private bank investors, who have typically bought upto 60% of its dollar deals in the past. Wholly owned subsidiary Shui On Development (Holding) is the issuer of the senior unsecured bonds and Shui On Land is the guarantor. Proceeds will be used to repay debt with near term maturities and the remainder to fund capital expenditure. IFR reports that the issuance is also the first SLB from a Chinese non-financial corporate.

AlJazira Bank raised $500mn via a Perpetual non-call 5Y (PerpNC5) AT1 Sukuk at a yield of 3.95%, ~36.25bp inside initial guidance of 4.25%-4.375% area. The bonds are unrated and received orders over $1bn, 2x issue size. The obligor is Bank AlJazira and is rated Baa1/BBB+. The first call date is 29 June, 2026 and if not called, the distribution resets then and every five years thereafter to the 5Y US Treasury + initial margin of 303.8bp. The bonds also have a dividend stopper.

Shenzhen Expressway raised $300mn via 5Y bonds at a yield of 1.832%, T+95bp, 55bp inside initial guidance of T+150bp area. The bond has expected ratings of Baa2/BBB and received orders $6.6bn, 22x issue size. IFR reports that the 22x subscription was due to rarity value, small issue size and solid credit metrics. The 22x cover ratio of the final book is believed to be one of the highest multiples from a Chinese corporate in recent years, according to a banker on the transaction. Proceeds will be used for debt repayment.

Goho Asset Management raised $88mn via a 2Y bond at a yield of 8.5%, unchanged from initial guidance. Wholly owned BVI subsidiary New Momentum International is the issuer and Goho is the guarantor. Proceeds will be used to repay offshore debt, acquire and dispose of distressed assets, and replenish working capital.

These are bonds denominated in offshore Renminbi (CNH) and issued outside China (mostly in Hong Kong). The first dim sum bond was issued in 2007 by China Development Bank – a 2Y offshore RMB bond in Hong Kong, with a 3% coupon and size of RMB 5bn ($750mn). These instruments get their name from dim sum, a popular delicacy in Hong Kong. Dim sum bonds are typically issued by issuers that have a need for Renminbi but do not want to go through regulatory approvals as dim sum issuance are not subject to regulatory approval from mainland China or Hong Kong, provided that they are sold to professional investors. As of 2019, most dim sum bonds were issued by financial corporations, followed by the real estate and industrials sectors while most dim sum issuances were from China.

On Fed officials having split views on inflation in debate over rate-hike timing
Jerome Powell, Federal Reserve Chairman
“A pretty substantial part or perhaps all of the overshoot in inflation comes from categories that are directly affected by the reopening of the economy.”
James Bullard, St. Louis Fed President
“If that’s what you think is going to happen, then by the time you get to the end of 2022, you’d already have two years of 2.5-3% inflation.”
“There are obviously upside risks to inflation.” “Supply and demand will adjust over time. That time might be a couple years. We don’t know.” “But if that happens quicker than you’d expect, then those price increases that pushed inflation up will actually pull inflation down next year.”
Gregory Daco, head of U.S. macroeconomics at Oxford Economics
“The differences in terms of the outlook for monetary policy really depend on and reflect the differences in the outlook for inflation.” “Those who believe that there will be a sticky environment in terms of inflation — and that what we’re seeing today is a sign of an environment in which inflation is going to remain much higher if policy remains as dovish as it is — want to see a much tighter stance.”

“This is an issue for Argentina and the Paris Club creditors but we certainly welcome the progress that has been made there.”
On good credit conditions ‘over next few quarters’ – according to James Keenan, BlackRock chief investment officer and co-head of global credit, and his team
Bottled-up consumer demand, fiscal spending and accommodative monetary policy “are combining to drive inflation expectations to levels not seen since 2006.” “We are seeing this in the shift of new issuance with a 124% year-over-year increase in corporate bond and bank loan supply to finance M&A and LBO-related transactions.”
On the likelihood of near-term global bond market correction
Elwin de Groot, head of macro strategy at Rabobank
“The message from Powell is: We will look through it (inflation). We’re not going to jump to conclusions and that creates some calm. But you just need a couple of big surprises (in data) and things are again open to correction.”
Leslie Falconio, senior fixed-income strategist at UBS Global Wealth Management
“We’re going to be in this range bound environment for quite some time.” “Even though people considered the Fed a bit hawkish, given the fact they moved the dot plot to two rate hikes in 2023, the market has already priced that in. We saw a move up in Treasury yields but nothing that was material.”
Guneet Dhingra, head of U.S. interest rates strategy at Morgan Stanley
“Inflation is not all transitory. It is going to be a mix of sustainable and transitory.” “Inflation will be higher than the last cycle. But not so high that it runs amok and becomes a difficult thing for the Fed to control. Optimism is fine, hysteria is not.” 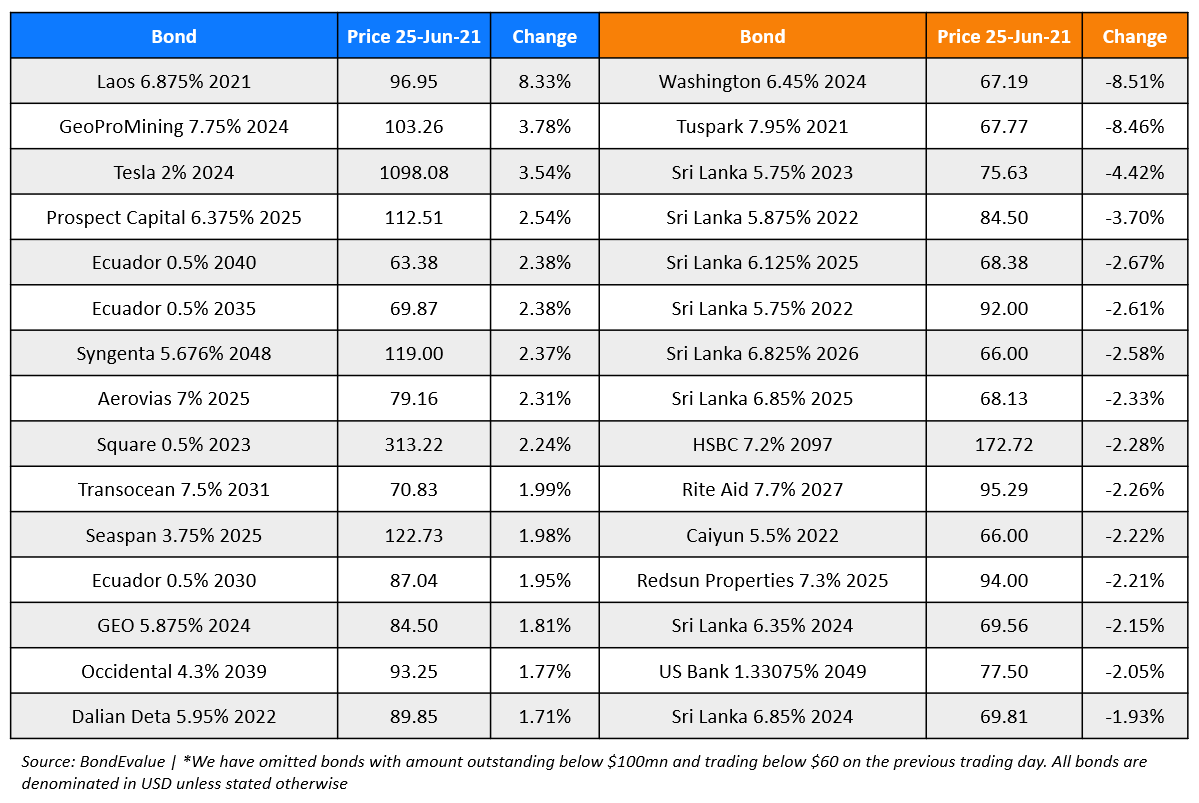