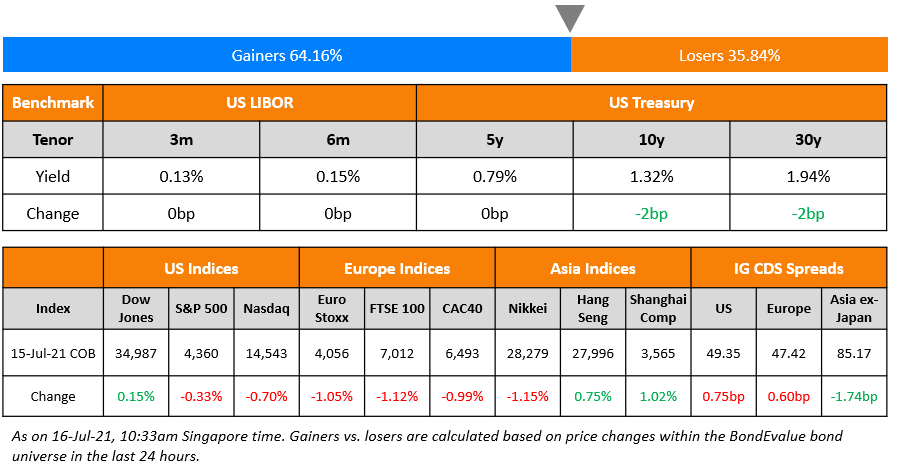 US markets dropped even as labor markets and earnings signaled a recovery. Initial jobless claims for the week ending July 10 stood at 360k, the lowest since the onset of the pandemic. These were under the 400k mark for the third week in a row but slightly higher than the expectation of 350k. S&P posted a loss of 0.3% while Nasdaq slid 0.7%. Morgan Stanley joined peers beating earnings expectations (details below). Energy, IT and Consumer Discretionary were down 1.4%, 0.8% and 0.6% respectively. Financials and Consumer Staples were up 0.4% each. US 10Y Treasury yields dipped 2bp to 1.32%. European indices also closed in deep red – FTSE, DAX and CAC were down ~ 1% each. US IG and HY CDS spreads widened 0.8bp and 4.4bp respectively. EU main and crossover CDS spreads widened 0.6bp and 3.8bp respectively. Brazil’s Bovespa was up 0.7%. Saudi TASI was up 0.2% while  Abu Dhabi’s ADX was down 0.2%. Asian markets mixed. Chinese growth was slightly lower than expected due to higher raw material costs and Covid-19 outbreaks. GDP expanded 7.9% YoY for the Apr-Jun quarter vs expectations 8.1% and vs 8.3% in the previous quarter. Nikkei is down 1.1%, Shanghai and HSI are down 0.2%  while Singapore’s STI is up 0.1%. Asia ex-Japan CDS spreads were 1.7bp wider. 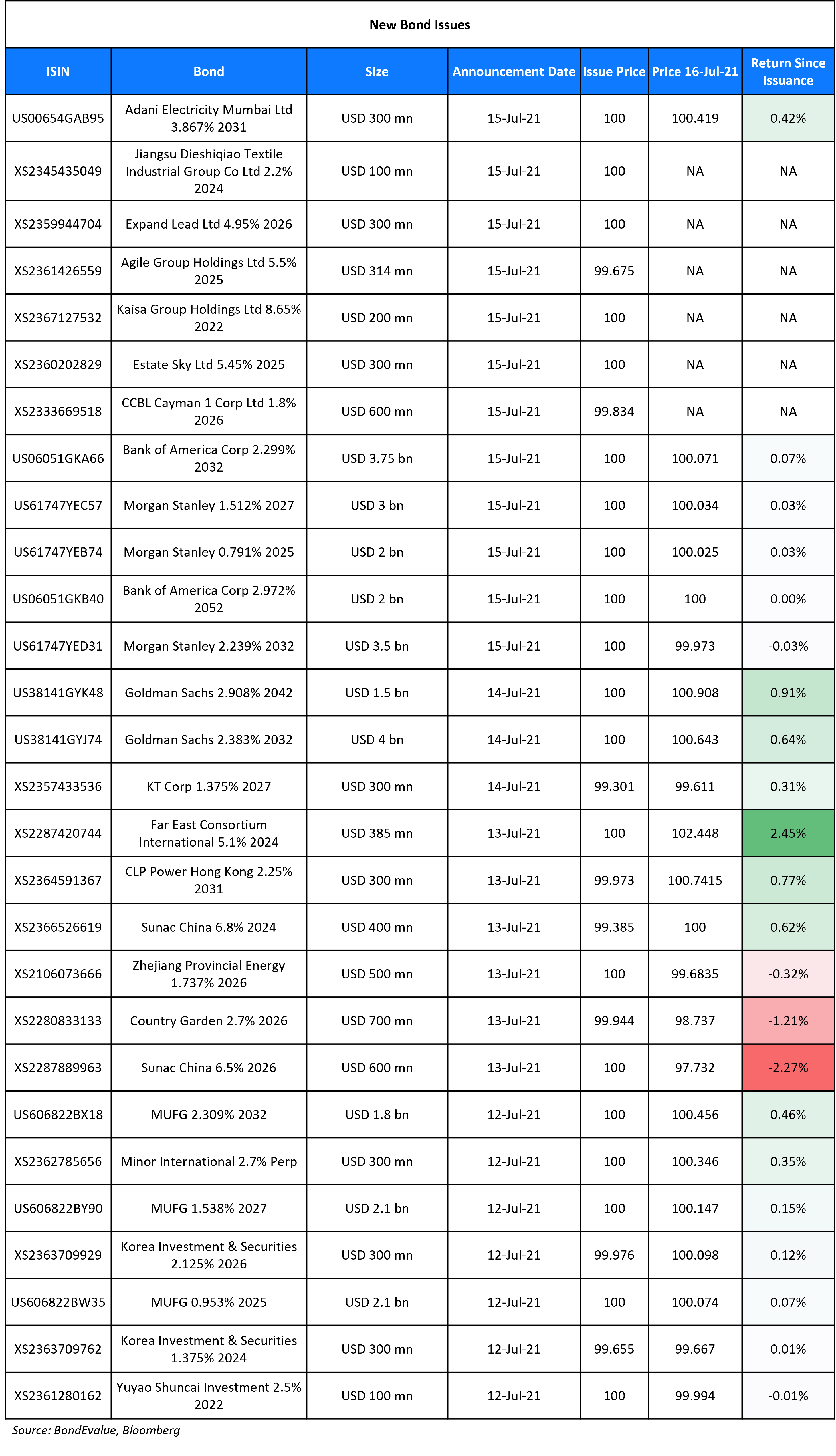 The bonds are expected to be rated A1/BBB+/A.

Bank of America (BofA) raised $7.75 via a three-trancher. It raised:

The bonds have expected ratings of A2/A-. Proceeds will be used for general corporate purposes.

Kaisa Group raised $200mn via a 364-day sustainable note at a yield of 8.65%. The bonds are unrated. While final orderbooks are not available, books had reached $900mn before final pricing. Proceeds will be used for debt refinancing and for general corporate purposes. The new bonds are priced 77bp over its older 8.5% 2022s that currently yield 7.88%.

Guangzhou R&F raised $179mn via a tap of their 11.75% 2023s a yield of 12.673%. The bonds have expected ratings of B+. While final orders were not available, the order book had reached over $370mn before final pricing. Easy Tactic is the issuer of the notes and R&F Properties (HK) is the guarantor, while Guangzhou R&F is the keepwell and equity interest purchase undertaking provider. Proceeds will be used for offshore debt refinancing.

Adani Electricity Mumbai raised $300mn via a 10Y sustainability-linked bond (SLB) at a yield of 3.867%, 30bp inside initial guidance of T+285bp area. The bonds have expected ratings of Baa3/BBB- and received orders over $2.7bn, 9x issue size. Asia took 49%, EMEA 27% and the US 24%. Fund/asset managers bought 87%, insurers and sovereign wealth funds 6%, private banks 4% and banks and financial institutions 3%. Adani Electricity Mumbai along with Power Distribution Services are the obligor of the new bonds with both companies being majority-owned subsidiaries of Adani Transmission. Following are the bond’s KPIs:

If the company misses the sustainability target, its coupons will step-up by 15bp. There is a put option at 101 upon a Change of Control event and a rating downgrade. Around $175m of the proceeds will be used to refinance an outstanding ECB facility, and the rest will be used for capital expenditure and general corporate purposes.

Frasers Logistics & Commercial Trust raised S$150mn via a 7Y sustainability bond at a yield of 2.18%, 22bp inside initial guidance of 2.4% area. The bonds have expected ratings of BBB+ and received orders over S$450mn, 3x issue size. Fund managers and insurance companies received 75%, 19% to banks and public sector accounts and 6% to private banks. Singapore accounted for 93% and 7% was to Hong Kong and other countries. The issuer is FLCT Treasury and the bonds are guaranteed by Perpetual Asia, rated BBB+, as a trustee. This is Fraser REIT’s first sustainability bond sold under their sustainable finance framework and proceeds will be used towards green or sustainable projects. It is also the “first-ever” sustainability notes to be priced in the Singapore dollar bond market as per Robert Wallace, chief executive of the REIT manager.

CCB Financial Leasing raised $600mn via a 5Y bond at a yield of 1.835%, 45bp inside initial guidance of T+150bp area. The bonds have expected ratings of A2/A, and received orders over $2.1bn, 3.5x issue size. CCBL (Cayman) 1 Corp is the issuer with a guarantee by CCB Leasing (International) Corp. Designated Activity Co. The bonds have a keepwell and liquidity support deed and a deed of asset purchase undertaking provided by CCB Financial Leasing. Proceeds will be used for general corporate purposes.

CSI Properties raised $300mn via a 4NC3 bonds at a yield of 5.45%, 30bp inside initial guidance of 5.75% area. The bonds are unrated and received orders over $1.9bn, 6.3x issue size. Asia 99% of the bonds and Europe 1%. Private banks received 44%, fund managers 37%, banks 17% and corporates 2%. Proceeds will be used for general working capital and debt repayment. Wholly-owned subsidiary Estate Sky is the issuer with a guarantee from the HK listed parent.

Minmetals Land raised $300mn via a 5Y sustainable bonds at a yield of 4.95%, 40bp inside initial guidance of 5.35% area. The bonds are unrated and received orders over $1.5bn, 5x issue size. APAC bought 98% of the bonds and EMEA 2%. Banks and securities firms were allocated 67%, asset/fund managers and hedge funds 23%, and private banks 10%. They also have a green transaction evaluation from S&P and a HKQAA green and sustainable finance pre-issuance stage certificate. Wholly-owned subsidiary Expand Lead is the issuer and the bonds are guaranteed by the Hong Kong listed parent. The bonds also have the benefit of a keepwell deed provided by state-owned China Minmetals Corp (Baa1/BBB+/BBB+), which owns a 61.88% stake in Minmetals Land. A cross-default to the keepwell provider applies to the sustainable bonds. There is also a change of control (CoC) put at 101 if the keepwell provider China Minmetals Corp owns less than 40% or ceases to be the single largest shareholder. Proceeds will be issued for debt refinancing in accordance with the company’s sustainable finance framework.

Jiangsu Dieshiqiao Home Textile raised $100mn via a 3Y credit-enhanced bond at a yield of 2.2%, 25bp inside initial guidance of 2.45%. The bonds are unrated. Proceeds will be used for debt refinancing and working capital purposes. The bonds are supported by an irrevocable standby letter of credit from the Bank of Jiangsu Nantong branch.

Consent solicitation is an offer by the issuer to change the terms of the security agreement. These are applicable for changes to bonds or shares issued and can range from distribution payment changes and covenant changes in bonds to changes in the board of directors with regard to equities.

“This is a shock going through the system associated with reopening of the economy, and it has driven inflation well above 2%. And of course we’re not comfortable with that.”

“I think we are in a situation where we can taper. We don’t want to jar markets or anything — but I think it is time to end these emergency measures. On the labor market I think we have made substantial progress. The committee is going to debate that in earnest now at the July meeting.”

“Real yield differentials over U.S. Treasuries are favourable for a few markets in Asia. This backdrop is conducive to foreign inflows in general. However, for Asia’s asset markets, we believe the taper will not cause a ‘tantrum’ this time, unlike in 2013. Stricter virus containment measures will eventually pay off, along with efforts to speed up national vaccination campaigns.”

“The extreme risk aversion seen among China property developers over the past month has led to significant spread widening… but at current valuations the risk-reward balance is favorable for increasing exposure to the sector’s debt…the goal of Chinese authorities is to slow growth and deleverage balance sheets to improve financial stability.”

On BOE official saying that the time to slow stimulus may be near – Michael Saunders, BOE Official

“For me, the question of whether to curtail our current asset purchase program early will be under consideration at our forthcoming meetings. If activity and inflation indicators remain in line with recent trends and downside risks to growth and inflation do not rise significantly … then it may become appropriate fairly soon to withdraw some of the current monetary stimulus. A modestly tighter stance … would help ensure that inflation risks 2-3 years ahead are balanced around the 2% target, rather than tilted to the upside, which I suspect is the case with the current policy stance. “It would still leave in place considerable stimulus and hence probably not derail the welcome recovery in the economy: it would be more akin to easing off the accelerator rather than applying the brakes.”

“The fixed income market may have gone a bit ahead of itself in expecting policy easing. Expect RMB outperformance to continue on the back of still robust external surplus. “Expectations of less NPLs with the better-than-expected economic data” are giving financials a boost, said William Ping, fund manager at Peaceful Investment Co. in Shenzhen.”

“The RRR cut is an obvious signal that China has entered an easing cycle. RRR is never one off, and I expect the PBOC to reduce RRR again by year-end. Meanwhile, the chance for a policy rate cut is also rising.” 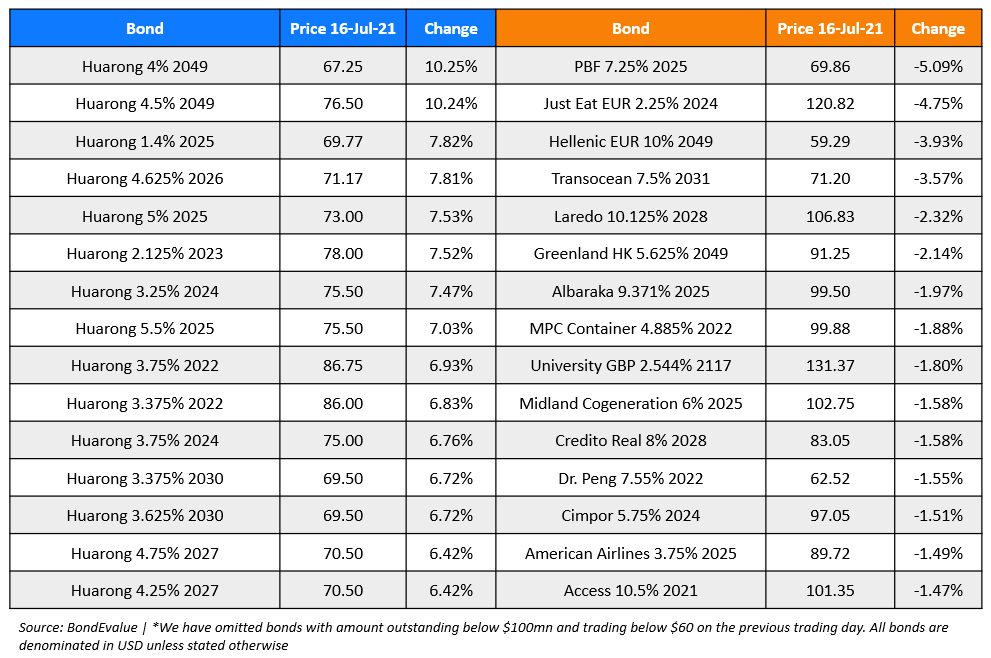