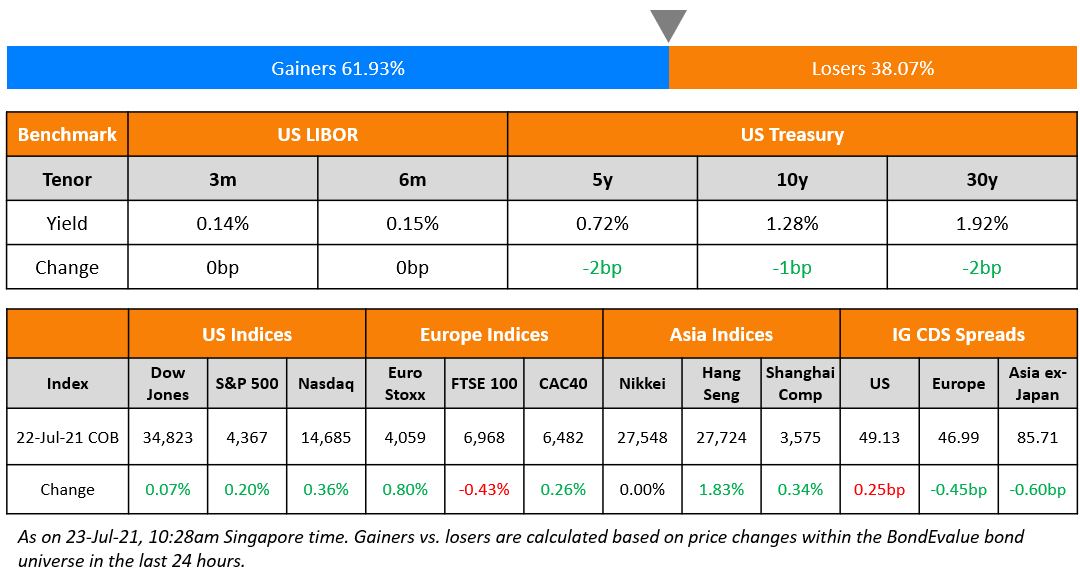 US markets continued with the momentum shrugging Monday’s risk-off sentiment even as the unemployment numbers came higher than expected – the S&P and Nasdaq were up 0.2% and 0.4% respectively. The upside led by IT, Healthcare and Consumer Discretionary up ~0.5% and was offset by Financials and Energy down ~1%. Strong corporate earnings continued to flow in with Intel, American Airlines (AA), Southwest and AT&T reporting numbers. According to Refinitiv, 15% of S&P 500 companies have reported earnings out of which 88% have beaten estimates. AA and Southwest’s profits for Q2 indicates a recovery in travel demand. In the week ending July 17, weekly jobless claims increased 51k to 419k, vs. estimates of 350k. US 10Y Treasury yields were a tad lower at 1.28%. The ECB held monetary policy steady while committing to purchasing €1.85tn ($2.2tn) of bonds until March 2022 under their asset purchase program. European bourses were mixed – DAX and CAC were up 0.6% while FTSE was down 0.4%. US IG CDS spreads widened 0.3bp and HY tightened 0.8bp. EU Main and Crossover spreads tightened 0.5bp and 2.4bp respectively. Brazil’s Bovespa was up 0.2%. Investors are keenly monitoring Chinese tech stocks as Chinese regulatory concerns resurface after penalties were imposed on ride-provider Didi. Asian markets opened mixed – Nikkei is up 0.6%, HSI, Shanghai and Singapore’s STI are down 0.9%, 0.4% and 0.1%. Asia ex-Japan CDS spreads were 0.6bp tighter. CK Infrastructure raised $300mn via a Perpetual non-call 5Y (PerpNC5) fixed-for-life bond at a yield of 4%, 20bp inside initial guidance of 4.2% area. The bonds have expected ratings of BBB, and received orders over $850mn, 2.8x issue size. There was a 20-cent rebate for private bank orders. This is CK Infra’s first dollar bond issuance since 2017, and comes after calling back its $1.2bn 5.875% Fixed-for-life perp in March this year.

China Citic Bank International raised $600mn via a PerpNC5 AT1 at a yield of 3.25%, 50bp inside initial guidance of 3.75% area. The bonds have expected ratings of Ba2, and received orders over $4.8bn, 8x issue size. APAC investors bought 99% and EMEA 1%. Asset/fund managers received 41%, banks 39%, corporates 17% and private banks and others 3%. The bonds are callable every six months starting 29 Jul 2026 and if not called on the first call date, the coupon resets to the 5Y US Treasury yield + 253bp. The bonds do not have a coupon step-up but have a dividend stopper. If the bonds are not called There is a non-viability loss-absorption feature and the securities are subject to the Hong Kong Monetary Authority’s resolution regime. Proceeds will be used for funding and general corporate purposes.

McLaren raised $620mn via a 5NC2 bond at a yield of 7.5%, 25bp inside initial guidance of 7.75% area. The bonds are rated Caa1/CCC+/B, and received orders over $4bn, 6.5x issue size. Proceeds will be used to refinance their 2022s, existing super senior revolving credit facility and add cash to their balance sheet. Bloomberg notes that the 7.5% yield is ~1.5% more than the average CCC-rated dollar denominated credit.

Shandong Iron & Steel Group raised $500mn via a 3Y bond at a yield of 4.8%, 55bp inside initial guidance of 5.35% area. The bonds are unrated and received orders over $2bn, 4x issue size. Asia took 98% and EMEA 2%. Banks/financial institutions got 49%, fund/asset managers 50% and private banks 1%. Wholly owned subsidiary Shandong Iron and Steel Xinheng International is the issuer with a guarantee from the parent. Proceeds will be used for debt refinancing and to repay shareholder loans of the guarantor’s offshore subsidiaries.

Guangzhou Industrial Investment Fund Management raised $300mn via a 5Y at a yield of 2.85%, 50bp inside initial guidance of 3.35% area. The bonds have expected ratings of A-, and received orders over $3.15bn, 10.5x issue size. APAC bought all of the notes. Banks/financial institutions were allocated 62%, asset/fund managers/hedge funds 32%, insurers 3%, and private banks 3%. Wholly owned subsidiary Vertex Capital Investment is the issuer with a guarantee from the parent. Proceeds will be used for debt refinancing and general corporate purposes.

Shanghai Fosun High Technology raised $200mn via a 3Y Shanghai Free Trade Zone (FTZ) bond at a yield of 4.3%. The bonds are unrated. Proceeds will be used for debt refinancing.

In case you missed it – China’s real estate developers’ high yield Index underperformed its peers witnessing a sharp drop of 6% in June and down 3.7% YTD. Investor concerns were apparent since the start of Q2 with Z-Spreads widening across certain Chinese real estate developers. China Evergrande’s Z-Spread widened by a massive 1,800bp since April, the highest in the sector as investor concerns grow over its liquidity position. The ‘three red-lines’, a key regulatory threshold for property developers set by Beijing has become an important factor that separates the winners and the losers. 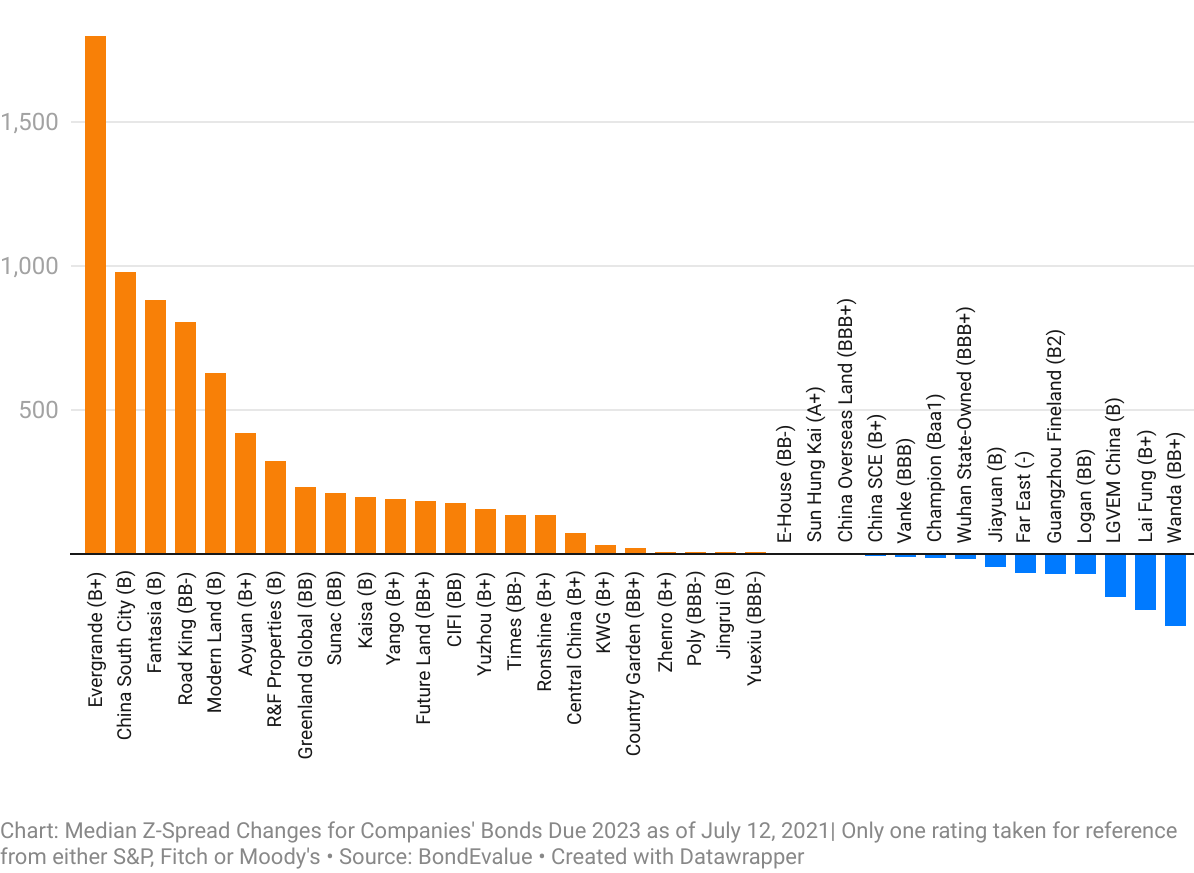 McLaren in today’s example raised $620mn with some of its proceeds going towards refinancing an existing revolving credit facility.

On the European Central Bank’s decision to become more tolerant of inflation before raising interest rates
Christine Lagarde, European Central Bank president
There is still “some way to go before the fallout from the pandemic on inflation is eliminated.”
According to the European Central Bank
“This may also imply a transitory period in which inflation is moderately above target.”
Carsten Brzeski, head of macro research at ING
“This was a bit like old wine in a new bottle; the communication has changed somewhat but in terms of substance the ECB remains very dovish, putting a cap on any tapering speculations.”
On Euro zone bond yields falling as ECB elaborates new strategy
Daniel Lenz, rates strategist at DZ Bank
“There was some disappointment that there wasn’t more detail about the (Pandemic Emergency Purchase Programme), but the general perception is that the forward guidance was on the dovish side, which is why we see the market react this way.” “Also, the hint was the Delta variant will prevent the ECB from slowing the pace of purchases anytime soon.”
Piet Haines Christiansen, chief strategist at Danske Bank
“The forward guidance is a bit more dovish and allows for more easy policy. The recalibration is about the duration of support rather than the size of the support.” “This is more aligned to the new strategy outcome rather than a new policy signal,” he said.
On some hedge funds sticking with reflation trade despite bond position pain
Troy Gayeski, partner and co-chief investment officer at SkyBridge Capital
“The consensus is that current yield levels are just too low for the level of inflation we have … and it doesn’t really look like hedge funds have tapped out of their positions.”
Robert Sears, chief investment officer at Capital Generation Partners
“I think the narrative of regime change still holds up.” “Next year, we would expect rates to be going up in what looks to be a positive environment for growth, and I think that’s the rationale most managers are maintaining.”
Edouard de Langlade, chief investment officer at macro hedge fund firm EDL Capital
“At the moment, you just cannot go long the fixed income market as there is no value, and going short has been a very painful trade recently, so we remain on the sidelines.” 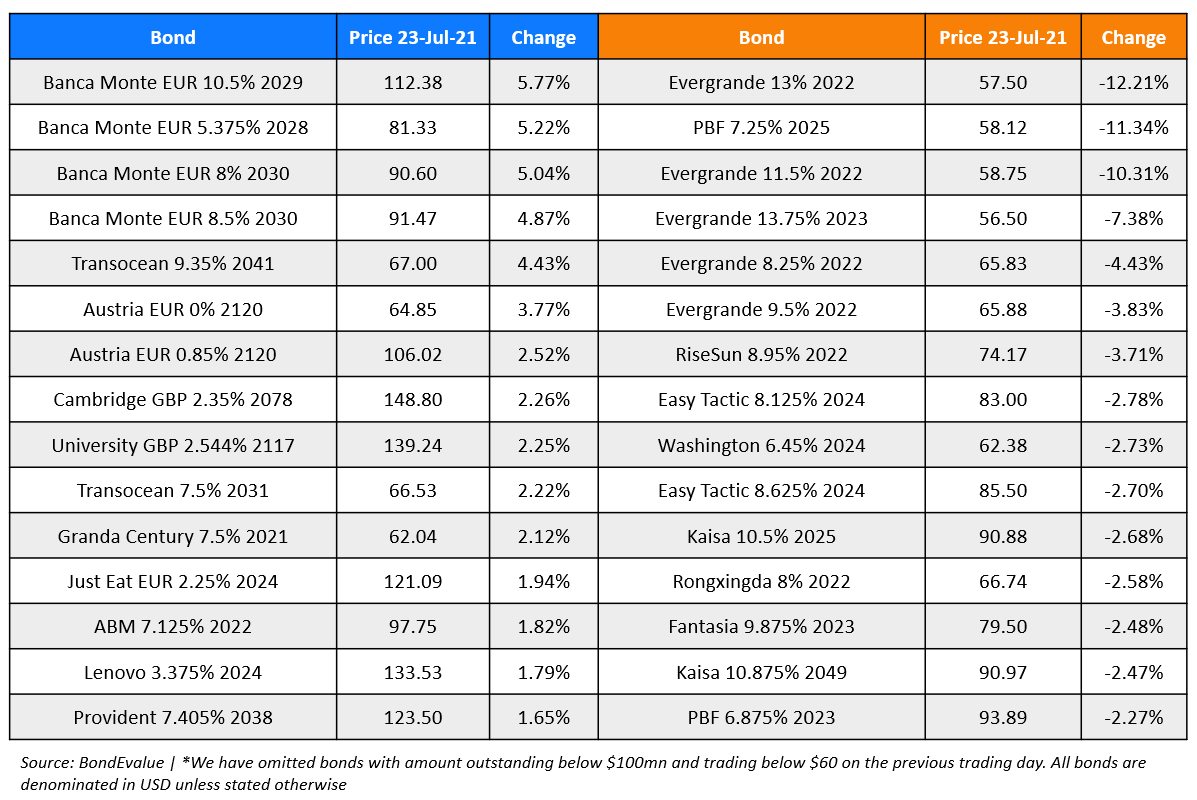