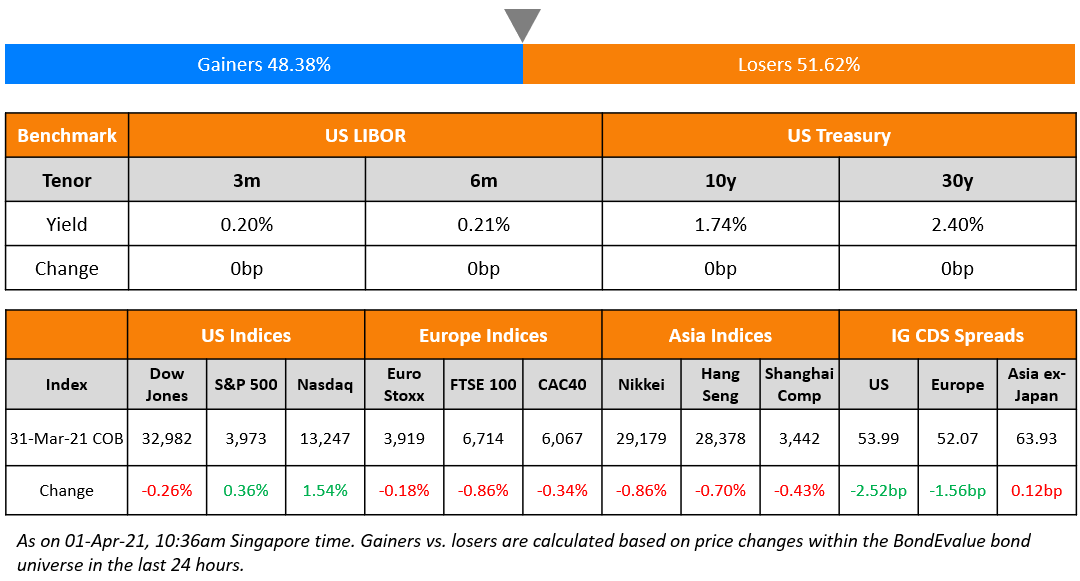 S&P closed 0.4% higher and Nasdaq was 1.5% higher. US 10Y Treasury yields were stable at 1.73%. ADP private job additions jumped by 517k led by a reviving leisure and hospitality industry. Markets are also watching President Biden’s request to the Congress to pass the $2.3tn jobs and infrastructure plan. DAX ended flat while the FTSE and CAC fell 0.9% and 0.3%. US IG CDS spreads were 2.5bp tighter and HY was 8.6bp tighter. Bloomberg notes that the Bloomberg-Barclays IG Corporate Bond Index posted a near 5% drop in Q1, its worst quarterly performance since Q3 of 2008. Read on for our quarter-end summary of the bond markets. EU main CDS spreads were 1.6bp tighter and crossover spreads tightened 9bp. Asian equity markets are up 0.5% and Asia ex-Japan CDS spreads are 0.1bp wider.

Keen on learning more about how new bonds are issued, how to analyze them and how to interpret credit ratings? Join us for the upcoming session on Understanding New Bond Issues & Credit Ratings at 6pm SG/HK today. 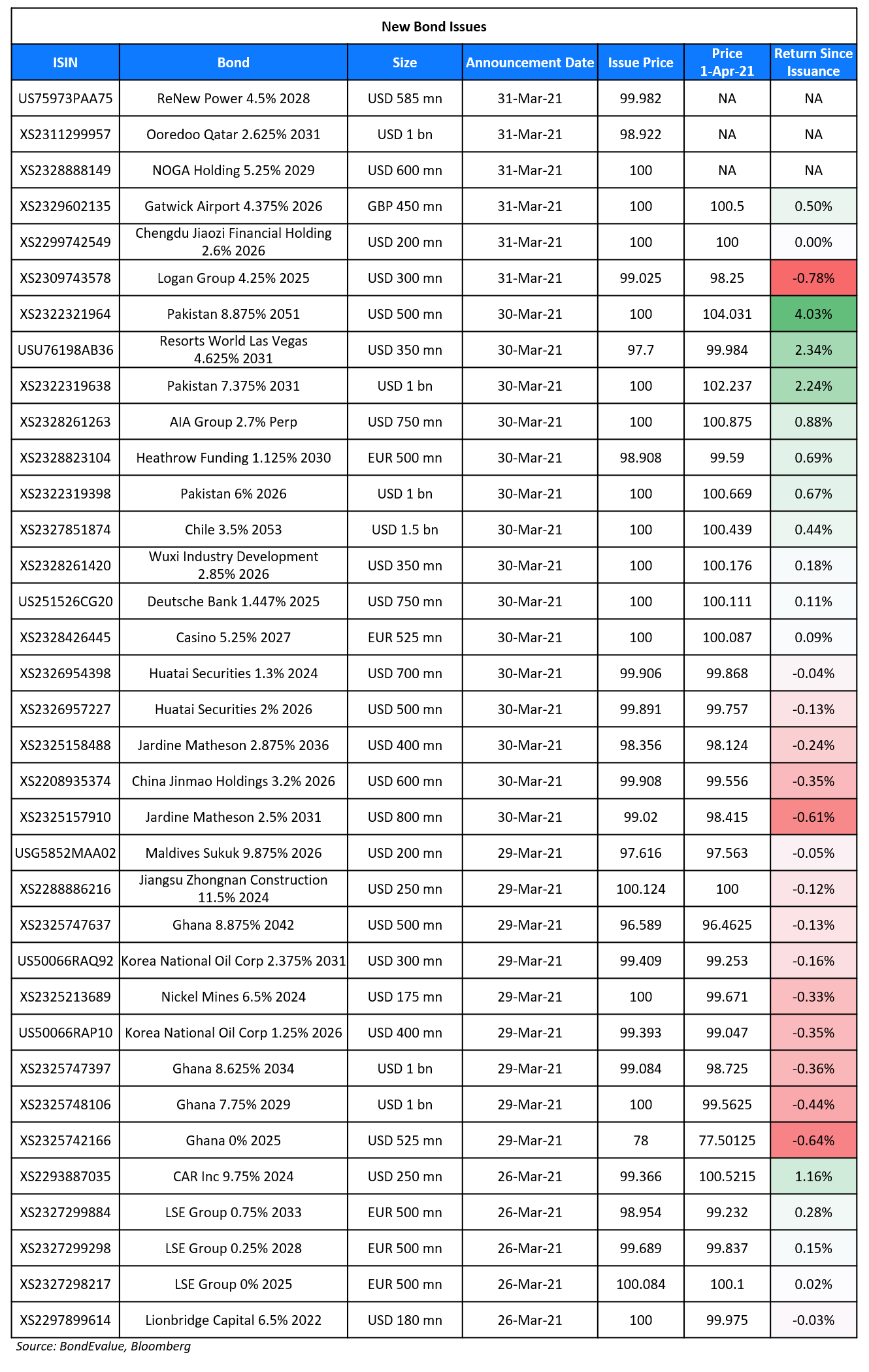 Chengdu Jiaozi Financial Holding raised $200mn via 5Y bond at a yield of 2.6%, 50bp inside initial guidance of 3.1% area. The bonds have expected ratings of BBB+ and received orders over $760mn, 3.8x issue size. Proceeds will be used for the construction of projects in the PRC and general corporate purposes. 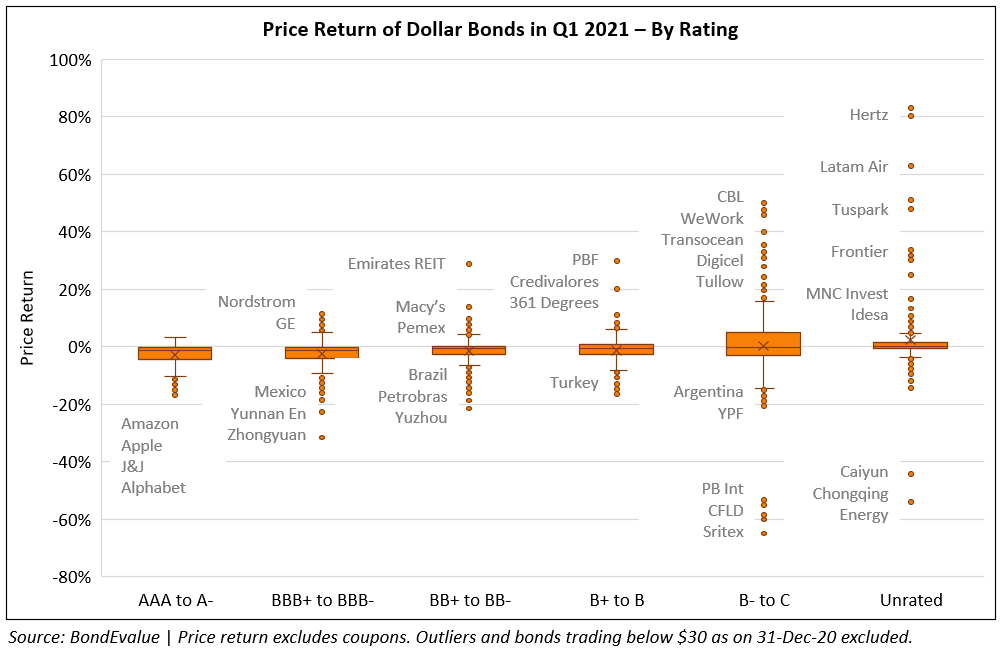 The first quarter of 2021 was a gloomy one for investors as 74% of dollar bonds in our universe delivered a negative price return (ex-coupon). The month of March saw a continuation of February’s disappointing run in the bond markets with 82% of dollar bonds delivering negative returns.

Investment Grade (IG) saw yet another month of underperformance vs. High Yield (HY) with one factor being the continued sell-off in US Treasuries that led to a ~25bp rise in yields for both the 10Y and 30Y, currently at 1.74% and 2.40% respectively. Overall in Q1, only 17% of IG bonds saw a positive price return, worse than even Q1 2020 when assets sold-off across the board in late March leading to 24% of IG bonds delivering positive price returns. HY on the other hand fared better with 39% delivering a positive return in Q1 2021, far more than the 2% bonds that traded in the green in Q1 2020.

The market was “firing off on all cylinders when it came to the trajectory toward higher yields, because you had a pathway toward improving fundamentals,” Rajappa said. “I definitely see the case for a steady rise in yields from here on.”

“The range of outcomes is still very wide,” Axel said. “We’re talking about the darkest depths of the recession or one of the biggest possible growth years we’ve had in decades. We’re kind of teetering between those two possibilities.”

On the increasingly tricky road to navigate recovery trade

“The pent up demand will likely fuel the recovery of cyclical sectors that have been hurt the most by the pandemic, but that could prove be short-lived as stimulus fades and investors have to look beyond the recovery to the new post-pandemic world,” said Ripley. “The landscape could become difficult to navigate.”

“Value (and more generally cyclicals) still command significant valuation advantage to the rest of the market,” said Tadesse. “Distressed out-of-favor assets tend to gain from potential multiple expansion at this point of the market cycle.”

In a note by Dubravko Lakos-Bujas and team, JPMorgan Chase strategists

“Value remains an outsized beneficiary of reopening, which is still in its early stages,” they said. Still, “while we believe value and reopening trade still has room for upside, we would emphasize focusing on higher quality companies with greater staying power, for example retail and energy.”

“It’s time to take money off the table now,” said Cecchini. “Perhaps the latest round of stimulus will keep the cyclicals trade alive a bit longer, but I just don’t see the cycle turning for good as we might expect after a normal recession,” he wrote. “Staying tactical and nimble seems prudent.”

“Any time you’ve had this massive run in risk assets — crude, copper, Russell 2000, currency trades –- it becomes harder because positioning gets one-sided,” said Purves. “In the beginning it’s just easier — the risk/return is better. Once they become more obvious trades, they become not-as-good trades.”

On Chinese lenders using legal contracts to gain a hidden advantage over other lenders to low-income countries – in a report led by Anna Gelpern, professor of law at Georgetown University and senior fellow at PIIE

“While creditors jockey for position among themselves, the damage is concentrated in a country that is already distressed and is in the weakest position to do anything about it,” said Gelpern. “In no-recourse project finance, that might be a normal thing to do . . . but in a full-recourse sovereign development loan, it’s not normal. It’s a questionable proposition,” Gelpern said. 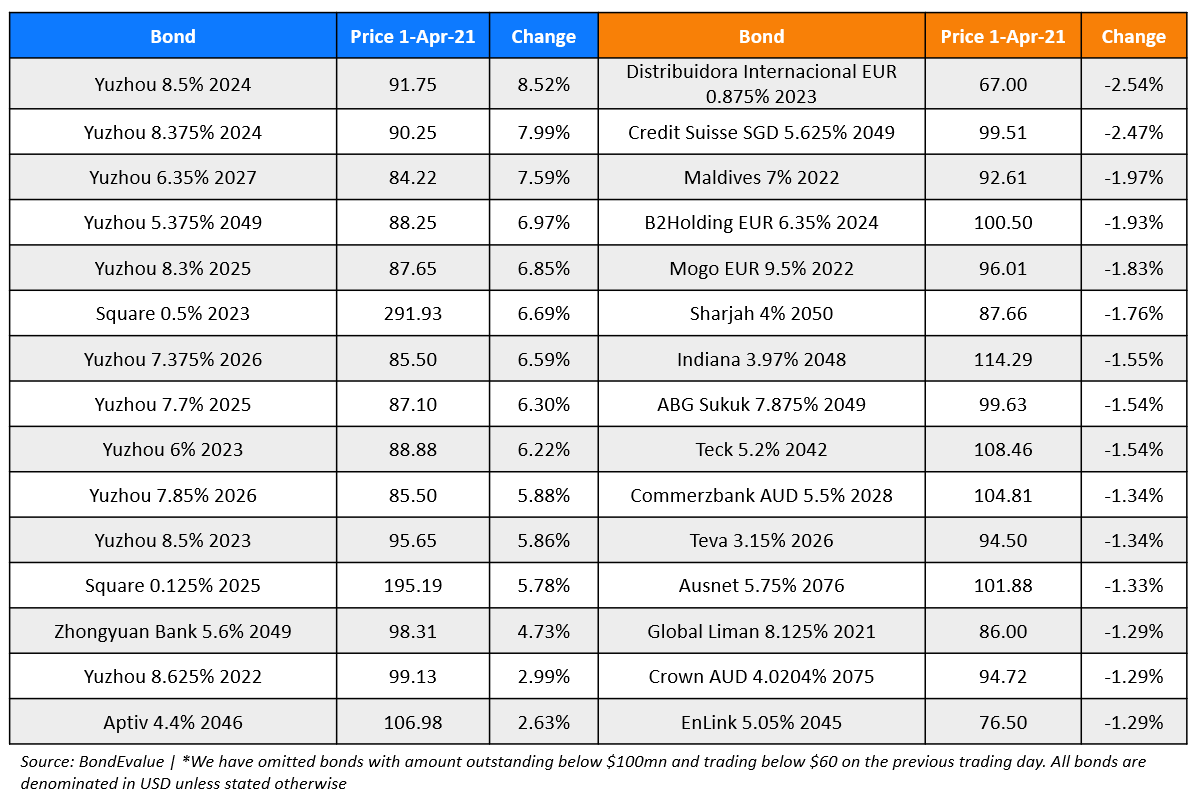