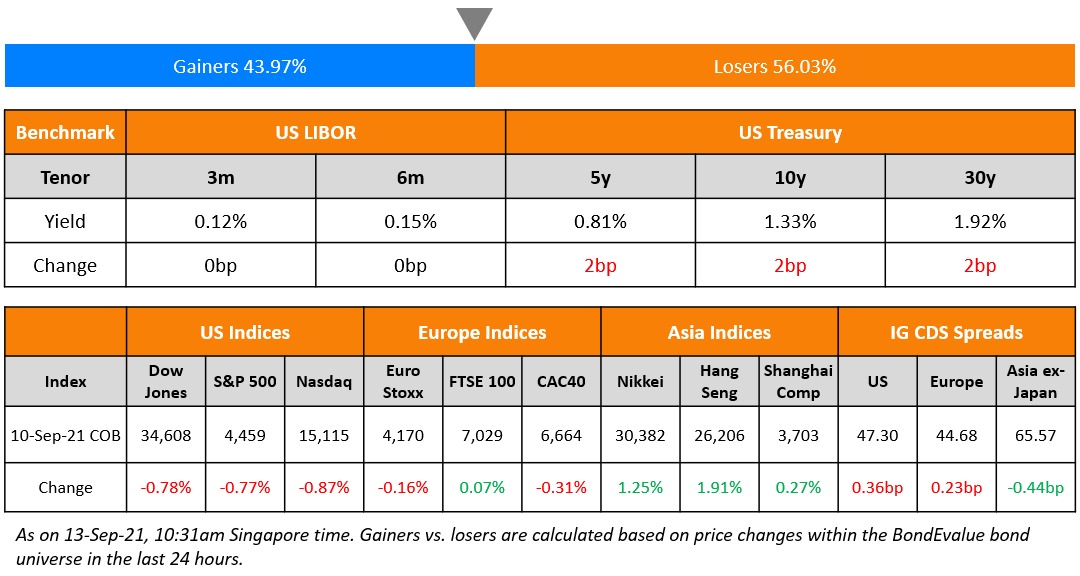 US markets retreated after early gains on Friday – Nasdaq and S&P ended the day 0.9% and 0.8% lower and the full week 1.6% and 1.7% down. All sectors in the market ended in the red with the drop led by Utilities and Real Estate which were down more than 1%. IT, Healthcare and Communications Services followed with losses of over 0.9%. Apple, down 3.3% led the losses after a Federal judge ruled that the tech giant could no longer force developers to use in-app purchasing. European stocks had a similar story as they reversed early gains – CAC and DAX slid 0.3% and 0.1% respectively while FTSE inched 0.1% higher. Brazil’s Bovespa dropped 0.9% on Friday. Negative sentiment spread to middle east markets as well where the Saudi TASI and UAE’s ADX fell 0.7% and 0.5% respectively on Sunday. Asian markets have also had a rocky start – HSI and Singapore’s STI were down 1.3% and 0.8% in early trade while Nikkei was 0.3% lower and Shanghai was broadly flat. US 10Y Treasury yields inched 2bp higher to 1.33%. US IG and HY CDX spreads widened 0.4bp and 0.8bp respectively. EU Main CDS spreads were 0.2bp wider and Crossover CDS spreads widened 1.6bp. Asia ex-Japan CDS spreads tightened 0.4bp.
Industrial production numbers for July came in better than expected for UK, Italy and India. UK reported a 3.8% growth against expectations of 3%, Italy reported a 7% growth against expectations of 5.4% and India reported a 11.5% pick-up against expectations of 10.8%. 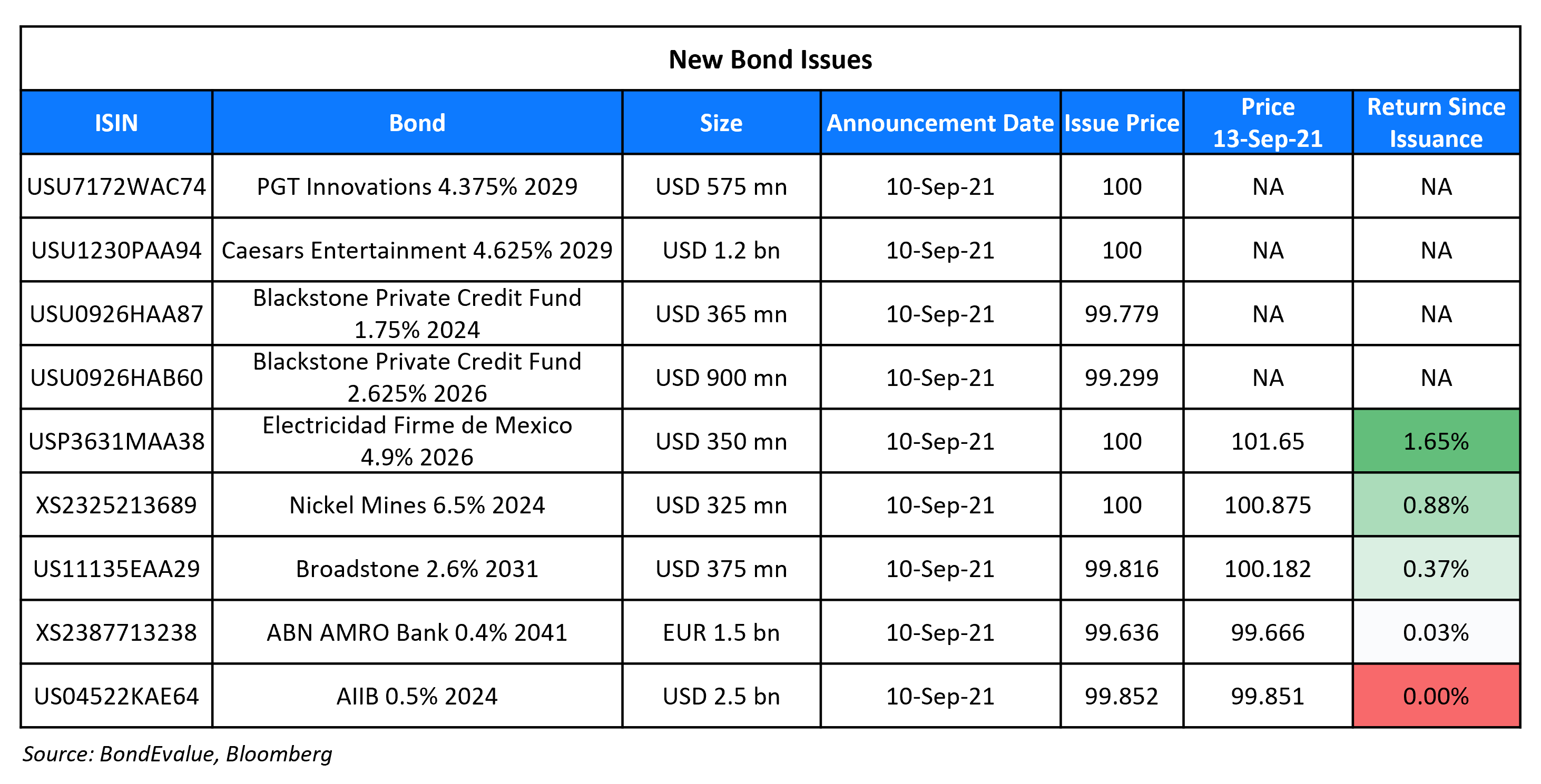 Asian Infrastructure Investment Bank (AIIB) raised $2.5bn via a 3Y green bond at a yield of 0.548%, 1bp inside the initial guidance of MS+17bp area. The bonds have expected ratings of Aaa/AAA, and received orders over $4.4bn, 1.8x issue size.
Nickel Mines raised $150mn via a tap of 6.5% 2024s bond at a yield of 6.5%. The bonds are rated B1/B+ (Moody’s/Fitch). Proceeds of the tap will be used for working capital and general corporate purposes. The original issuance was yielding 6.15% on Friday.

Evergrande’s dollar bond investors may have to take a 75% haircut as per Nomura’s credit analysts.

On the demand for bonds remaining high – Matt Brill, head of U.S. investment-grade credit at Invesco Ltd
“Buyers have not been scared at all. We have not seen spreads back up or any deals struggle to get done.” “Us investors are saying ‘Hey, keeping bringing more. We’re not getting enough bonds.’”
On the concerns over greenwashing of sustainability-linked bonds
Martin Dropkin, head of Asian fixed income at Fidelity International
“The tailor-made nature of both sustainability performance targets and interest coupon adjustment potentially gives rise to concerns around greenwashing.”
According to Radi Annab and Cathy Cheng, DBRS Morningstar analysts
“As investors focus more on ethical and sustainable portfolios, the link between achieving or missing ESG objectives and the cost of debt may become an increasingly important credit consideration.”
Paul Lukaszewski, head of corporate debt for Asia-Pacific at Aberdeen Standard Investments
“When markets move this far this quickly, inevitably some corners end up being cut,” he said. “We see a risk that money will flow into investments whose ESG credentials don’t stand up to closer scrutiny.”
Sheldon Chan, portfolio manager for Asia credit bond strategy at T. Rowe Price
“SLBs are a growing segment of the ESG-labelled bond markets, but the sample size in Asia currently remains small and the market has yet to gravitate toward a set of best practice standards,” he said.
On a boom in ESG investing pushing up greeniums
Henrik Johnsson, co-head of investment banking EMEA at Deutsche Bank
“We are now able to go to issuers and tell them ‘if you issue your debt in green format, you will actually save money,’ meaning that the hurdles we had to overcome for our clients to issue green bonds are now gone.” “We are in a Goldilocks moment.” “At some point, this will stop because if over time 100% of bonds are issued in the green/ESG format, the premium for green will go away and that will become the new cost of financing. In the meantime, it is a really extraordinary time.”
Pablo de Ramon-Laca, director general of Spain’s Treasury
“Everything else equal, investors are willing to pay more for a green bond than for a conventional bond.”
Arthur Krebbers, head of sustainable finance, corporates at NatWest Markets Plc
“The greenium tends to be higher, because the starting point is higher.”
On Sri Lanka central bank governor Lakshman’s announcement to step down
Weligamage Don Lakshman, Central Bank of Sri Lanka Governor
“Getting things done according to my policy perspectives was not an easy task. My plan was to tender my resignation on my 80th birthday coming next month.” “The unpleasant events over the last week or 10 days have shortened my intended period by about six weeks,” he said.

Nathalie Marshik, head of EM sovereign research at Stifel
“We continue to see more probability of downside given the current administration’s uncompromising political agenda in defiance of the U.S. as well as an ever-pressing need to maintain high spending to keep popularity levels high.”
Fabiano Borsato, chief operating officer at Torino Capital
“The risk of fiscal unsustainability could increase as fiscal revenues would be exposed to the evolution of the exchange rate USD/Bitcoin.” 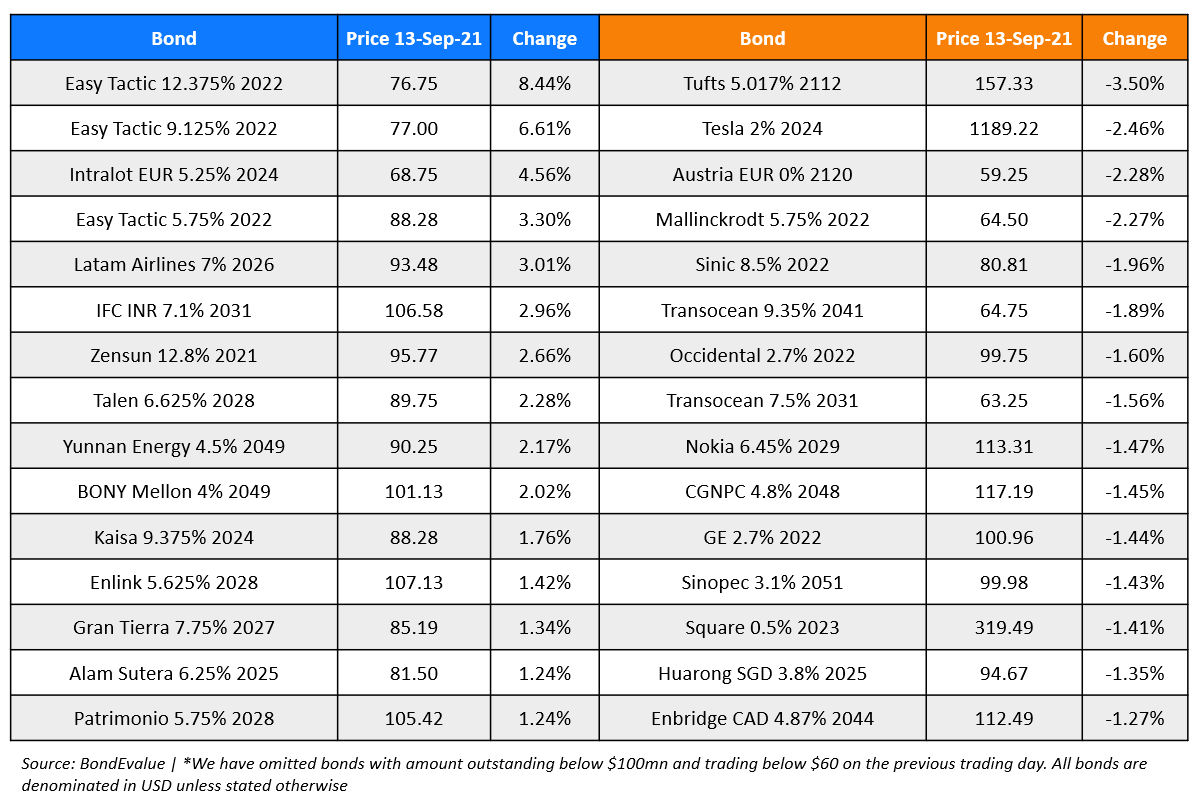