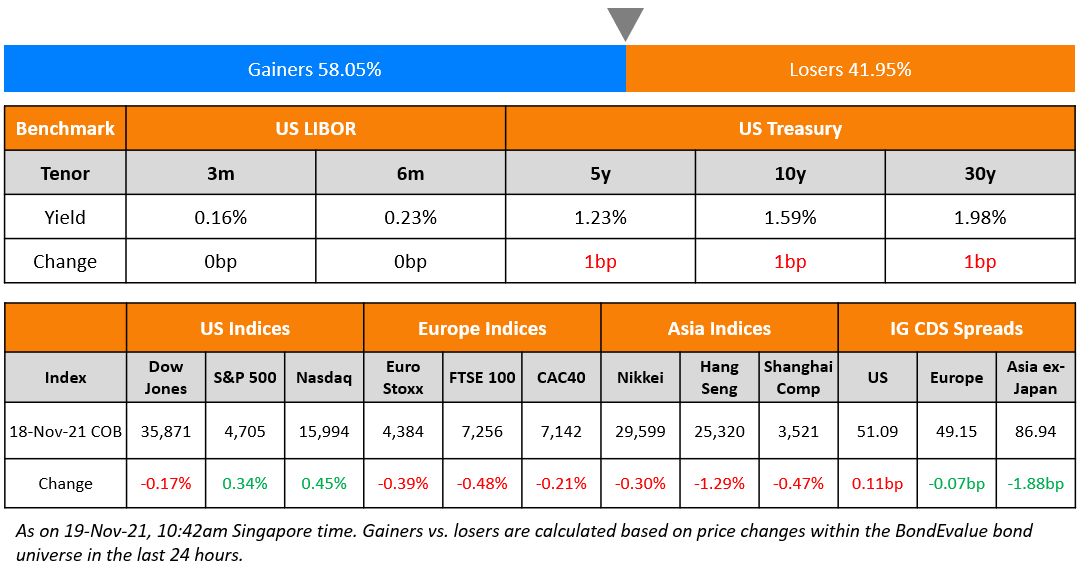 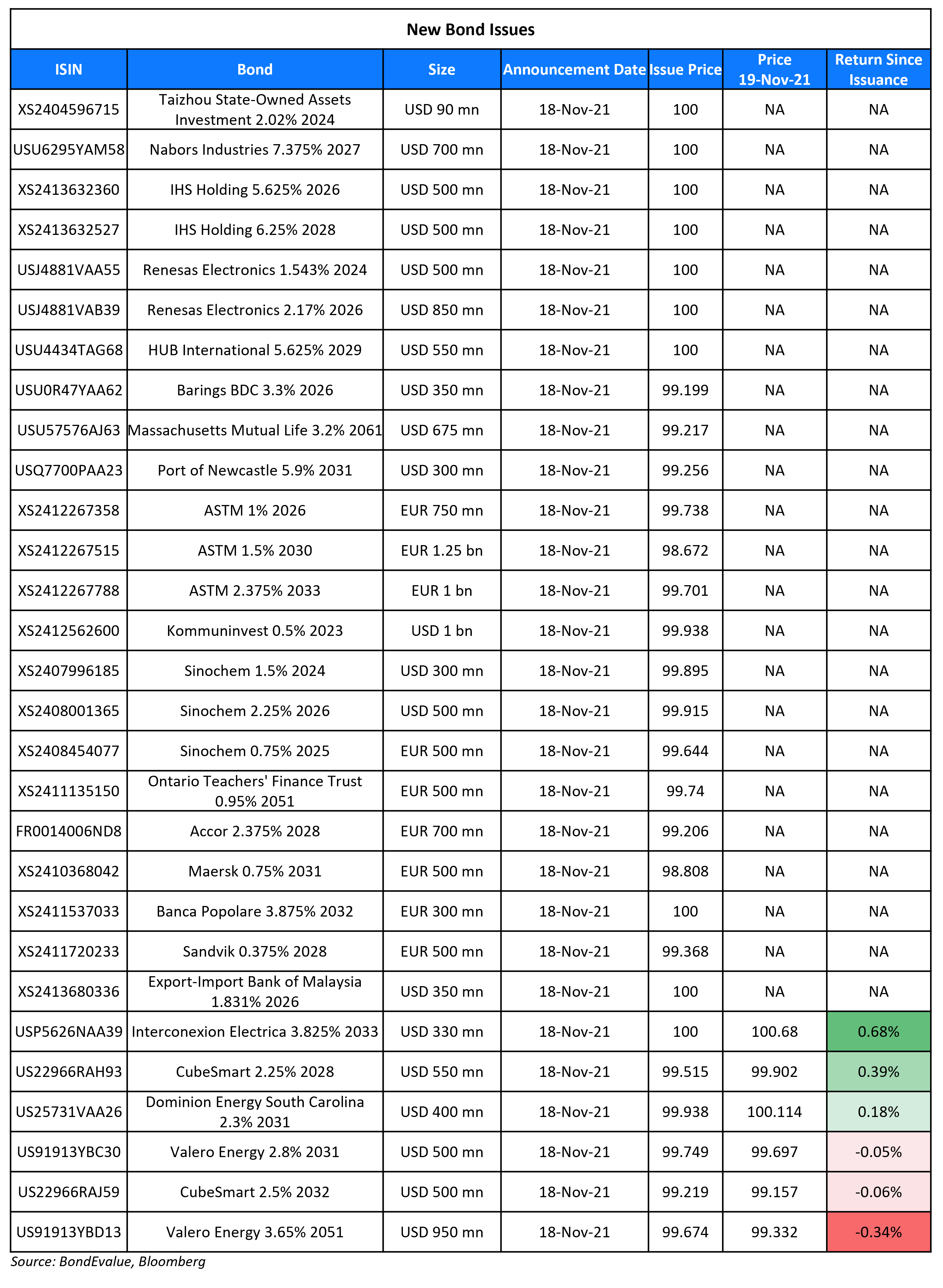 Export-Import Bank of Malaysia raised $350mn via a 5Y bond at a yield of 1.831%, 30bp inside initial guidance of T+90bp area. The bonds have expected ratings of A3 (Moody’s), and received orders over $1.3bn, 3.7x issue size. Proceeds will be used for general banking and financing activities, working capital, as well as other corporate purposes.  Asia took 97% and EMEA 3%. Fund managers and asset managers received 52%, insurers and pension funds 13%, banks 22%, the public sector 12% and private banks and others took the remaining 1%.

Port of Newcastle raised $300mn via a 10Y bond at a yield of 6%, unchanged from initial guidance. The bonds have expected ratings of Baa3/BBB-/BBB- (Moody’s/S&P/Fitch). Proceeds will be used to refinance existing debt.

Taizhou State-owned Assets Investment raised $90mn via a 3Y bond at a yield of 2.02%, 33bp inside initial guidance of 2.35% area. The bonds are unrated. Proceeds will be used for business development and working capital. The bonds are supported by a letter of credit from Bank of Ningbo Taizhou branch.

Asset Backed Securities (ABS) are securities that are collateralized or backed by a pool of assets. This pool of assets are made by a process of securitization and could be in the form of loans, credit card debt, mortgages etc. with each security backed by a fraction of the total pool of underlying assets. Thus, an investor gets interest and principal payments while also assuming the risk of the underlying assets. The underlying pool of assets are structured in different tranches with the highest priority of repayment going to the top tranche and then to the second tranche and so on. Goldman Sachs recently said that investors should rotate into securitized debt like ABS from corporate bonds.

“It’s not over… It could get worse unless the Fed gets a handle on money supply growth. “I don’t think the markets are prepared for how fast I think the Fed has to go. So much money was created during the pandemic to cushion the economic effects, but that wasn’t pulled back and that is what’s flowing in.”

On China’s Housing Market to Contract But Not Crash – Barclays

Property investment is likely to fall 5-8% in 1H 2022 while new floor space starts drop as much as 20%. Home sales volume will probably fall 10%-15% in 1H… Our base case housing-market outlook remains a controllable contraction in property investment (and home prices) in 2022, rather than a crash or a financial meltdown”.

“The firm has lost the capacity to sell new homes, which means its main business model is effectively defunct. This makes full repayment of its debts unlikely”.

“This is too much unorthodoxy in action… It may start biting institutions more now and we can see an increase in debt restructurings, which may take us to uncharted waters.”

“For the time being, credit investors seem pretty sanguine about the monetary stance… But the risk of a serious repricing in Turkish credit over the next six months or so is definitely higher.”

Henrik Gullberg, a macro strategist at Coex Partners in London

“The situation will deteriorate due to lira depreciation, which will feed into higher inflation until there’s an end to this vicious circle” 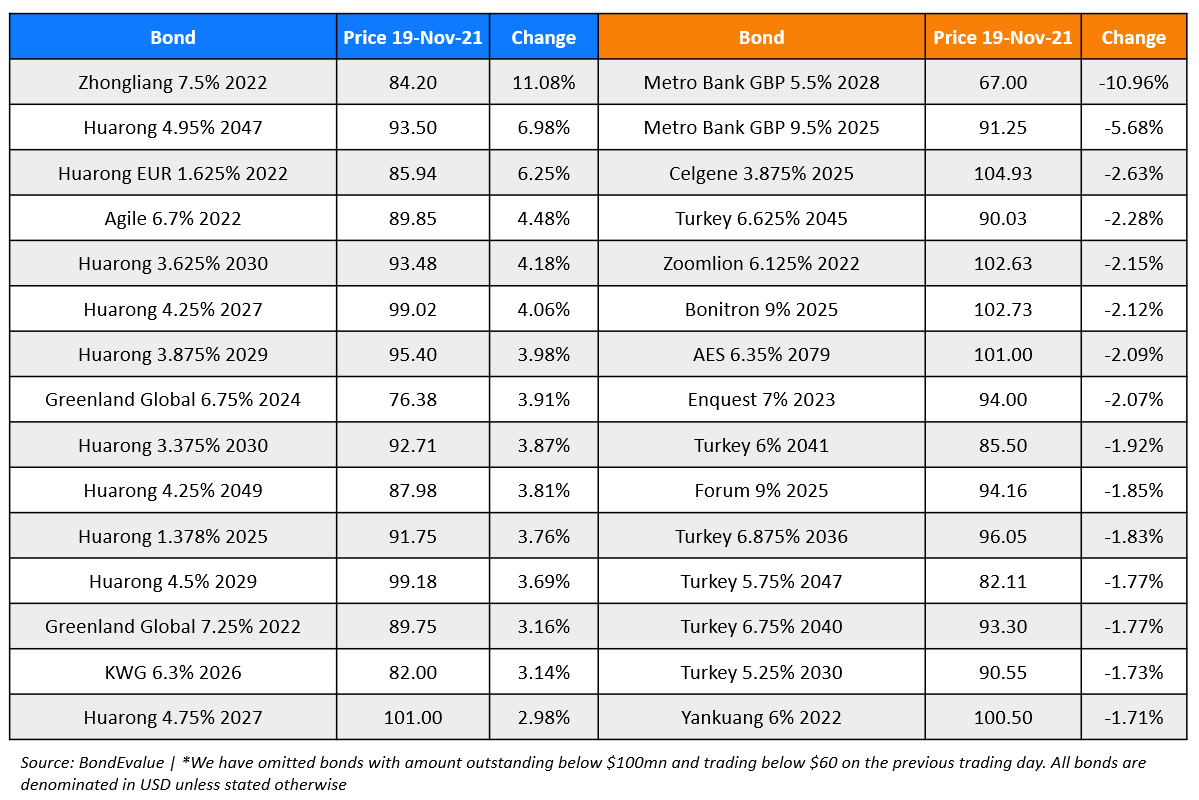