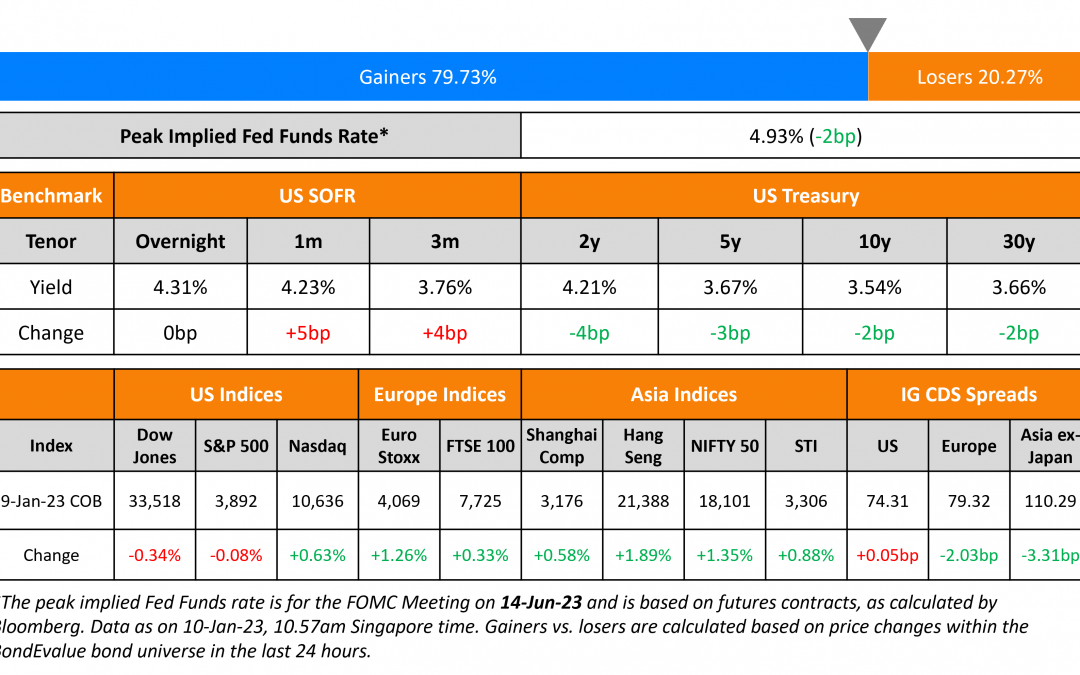 US Treasuries eased slightly on Monday by 2-4bp across the curve. The peak Fed funds rate was down 2bp to 4.93% for the June 2023 meeting, despite two Fed speakers indicating that they would favor seeing the Fed raising rates above 5% this year. The probability of a 25bp hike at the FOMC’s February 2023 meeting stands at 80% vs. 76% yesterday. US equity markets ended mixed with the S&P down 0.1% and Nasdaq up 0.6% respectively. US IG and HY CDS spreads were 0.05bp and 1.9bp wider. 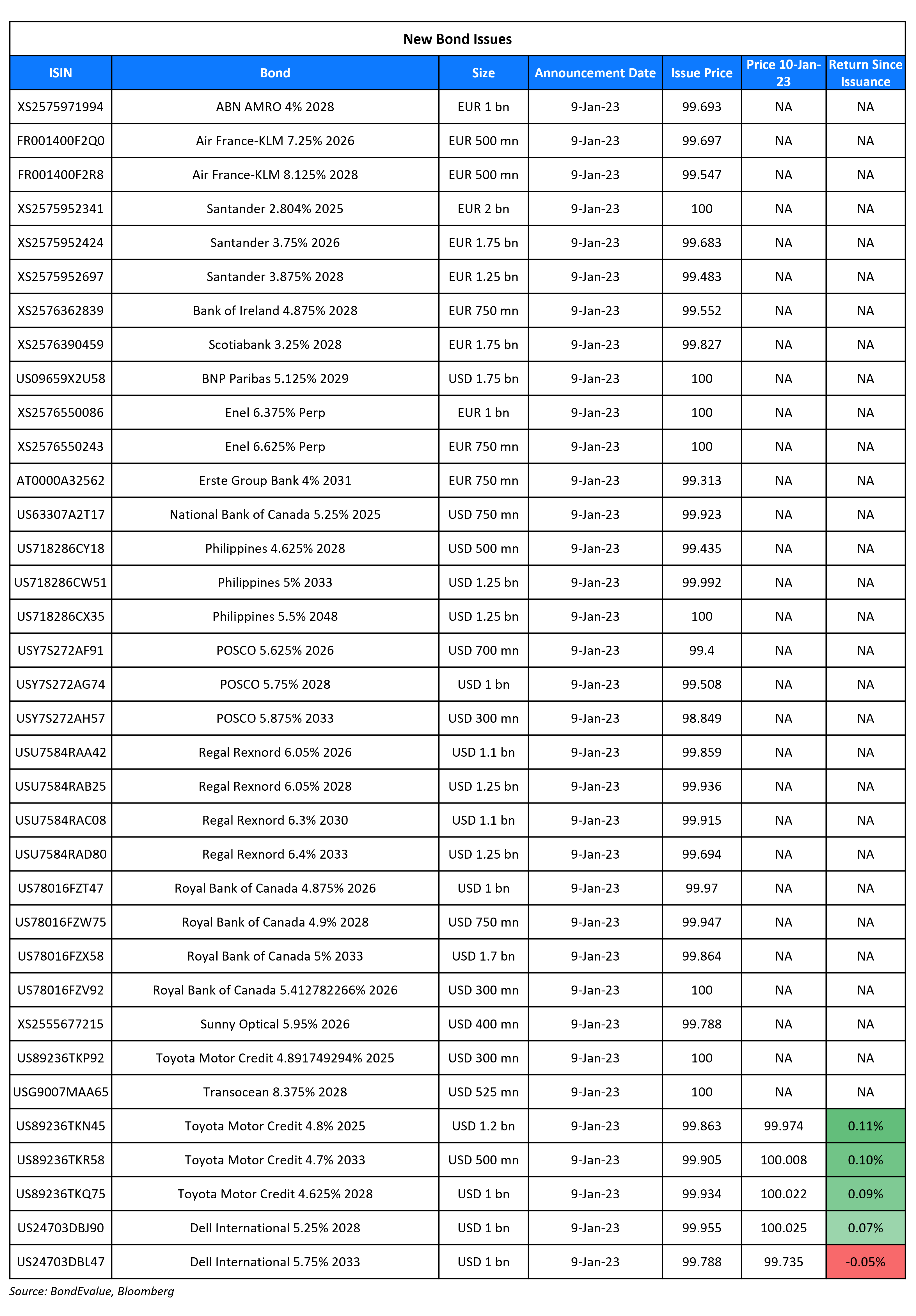 Philippines raised $3bn via a three-tranche deal. It raised:

Posco raised $2bn via a three-trancher. It raised:

The senior bonds are be rated Baa1/A- (Moody’s/S&P) and received orders over $17.5bn, 8.8x issue size. Proceeds will be used for refinancing and general corporate purposes.

Sunny Optical Technology Group raised $400mn via a 3.5Y sustainability-linked bond (SLB) at a yield of 6.018%, 30bp inside initial guidance of T+235bp area. The senior bonds received orders over $1.35bn, 3.4x issue size. APAC took 88% and EMEA 12%. Of this, asset/fund managers took 64%, banks/financial institutions took 14%, SWFs took 11%, insurers/pension funds 7% and private banks 4%.  If the company fails to (a) achieve its target to reduce GHG intensity by 20% by 2025 versus a 2021 baseline or (b) fails to publish the sustainability performance report for 2025 or (c) relevant verification assurance confirmation by 30 April 2026, it will redeem the outstanding bonds at a price of 100.5. Proceeds will be used for refinancing purposes.

Air France-KLM raised €1bn via a two-tranche deal. It raised

Proceeds from the senior unsecured, sustainability-linked bonds will be used for general corporate purposes, including partial redemption of the French state-guaranteed senior bank loan granted in May 2020.

Santander raised €5bn via a three-tranche deal. It raised

The senior preferred bonds have expected ratings of A2/A+/A.

Catastrophe bonds also referred as Cat bonds are risk-linked securities that are designed in favor of the issuer as these allow the transfer of risks related to a catastrophe or a natural disaster to the investors. These are generally high yield debt instruments that payout to issuers in case of specific triggers. These bonds essentially act as insurance policies for the issuer against natural disasters, where they pay regular coupons (premium) in exchange for protection. In the event of a disaster trigger, issuers will receive a payout from the proceeds of the bond and the principal repayment and interest payments are either deferred or cancelled. If a trigger event doesn’t occur, the issuer continues to pay the coupons as scheduled, similar to a regular bonds and proceeds are returned to the investors at maturity.  Cat bonds are generally purchased by governments, insurance and reinsurance companies. These bonds have gained traction as the frequency of natural disasters is on the rise.

Insurer Beazley has launched the first cyber catastrophe bond where the $45mn private bond will pay out to Beazley if total claims from a cyber attack on its clients exceed $300mn.

Have to take a 25bp move “more seriously and to move in that direction”… “Eventually I want us to get to 25” basis point rate hikes, he said. “The specific timing of that is going to be a function of the data that comes in.”

“Pillars of dollar strength are starting to recede. Last week’s minutes show the Fed is approaching terminal rate and will be pausing soon.”

On Equities, bonds ETFs drawing in near-record amounts of cash in 2022: BlackRock

“If you look at the market context for 2022, on the surface you would expect that the flows would have been more muted, because stocks and bonds declined by double digits compared to 2021… But we have seen the second-best year for ETF flows on record, only behind 2021. This shows the acceleration of ETFs as an investment vehicle of choice in 2022” 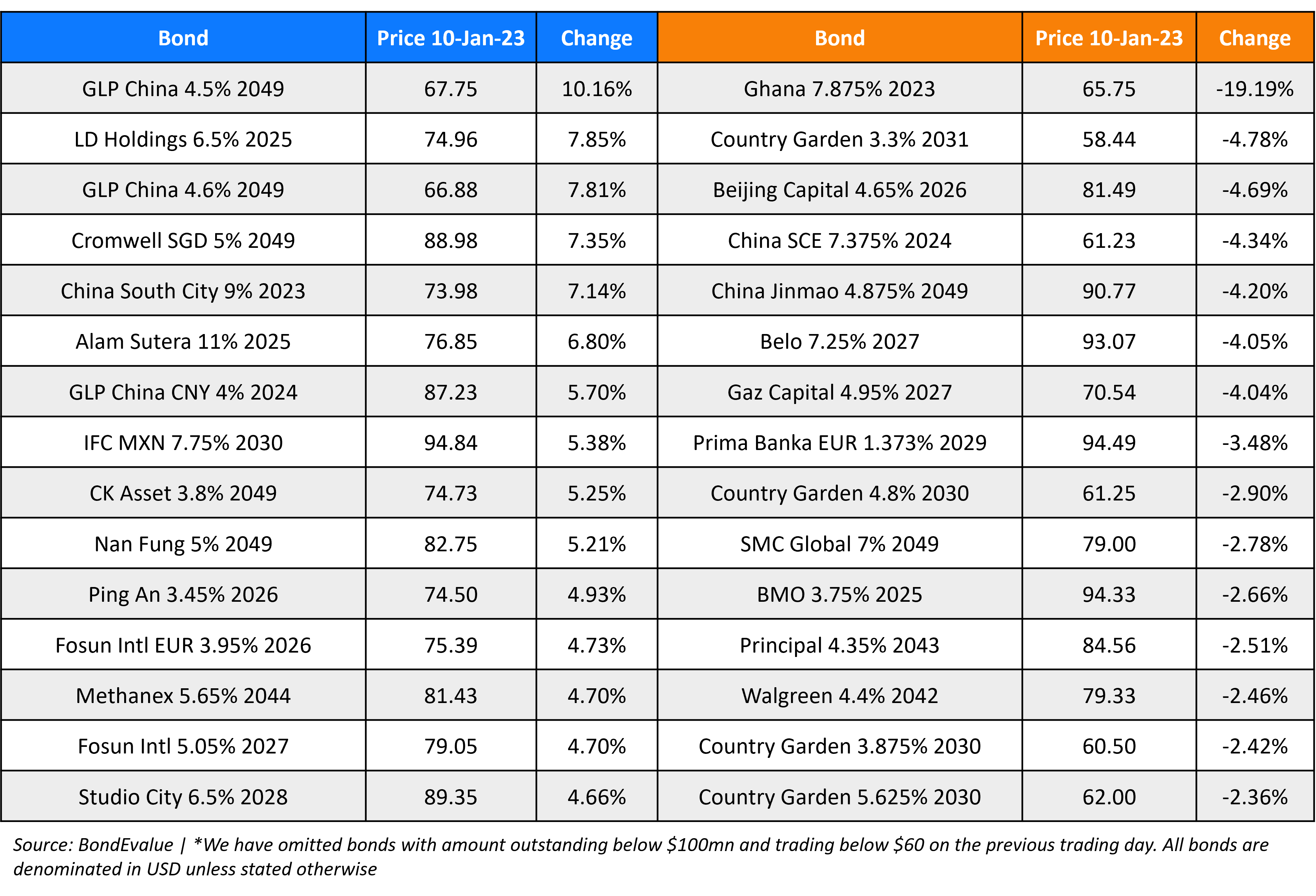