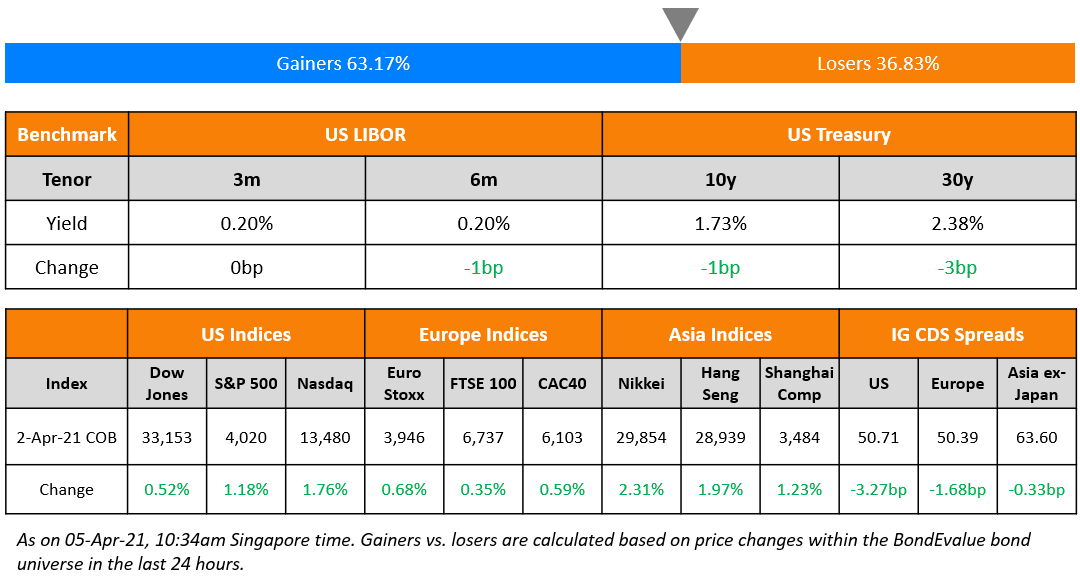 The S&P crossed the 4,000 mark ending 1.2% higher and Nasdaq 1.8% higher on Thursday. US 10Y Treasury yields were stable at 1.73%. US Non-farm payrolls smashed expectations of 660k, coming in at a massive 916k. Markets are also watching President Biden’s request to the Congress to pass the $2.3tn jobs and infrastructure plan. European equities also closed higher with the DAX and CAC up 0.7% and 0.6%, and the FTSE up 0.3%. US IG CDS spreads were 0.5bp tighter and HY was 2.9bp tighter. EU main CDS spreads were 1.7bp tighter and crossover spreads tightened 7bp. Asian equity markets are flat and Asia ex-Japan CDS spreads were 0.3bp tighter. It’s a quiet Monday at the primary markets with no new dollar deals today.
Bond Traders’ Masterclass

Keen on learning how to do bond calculations on Excel from an ex-bond trader? Join us for the upcoming session on Using Excel to Understand Bond Calculations at 6pm SG/HK this Wednesday, April 7. 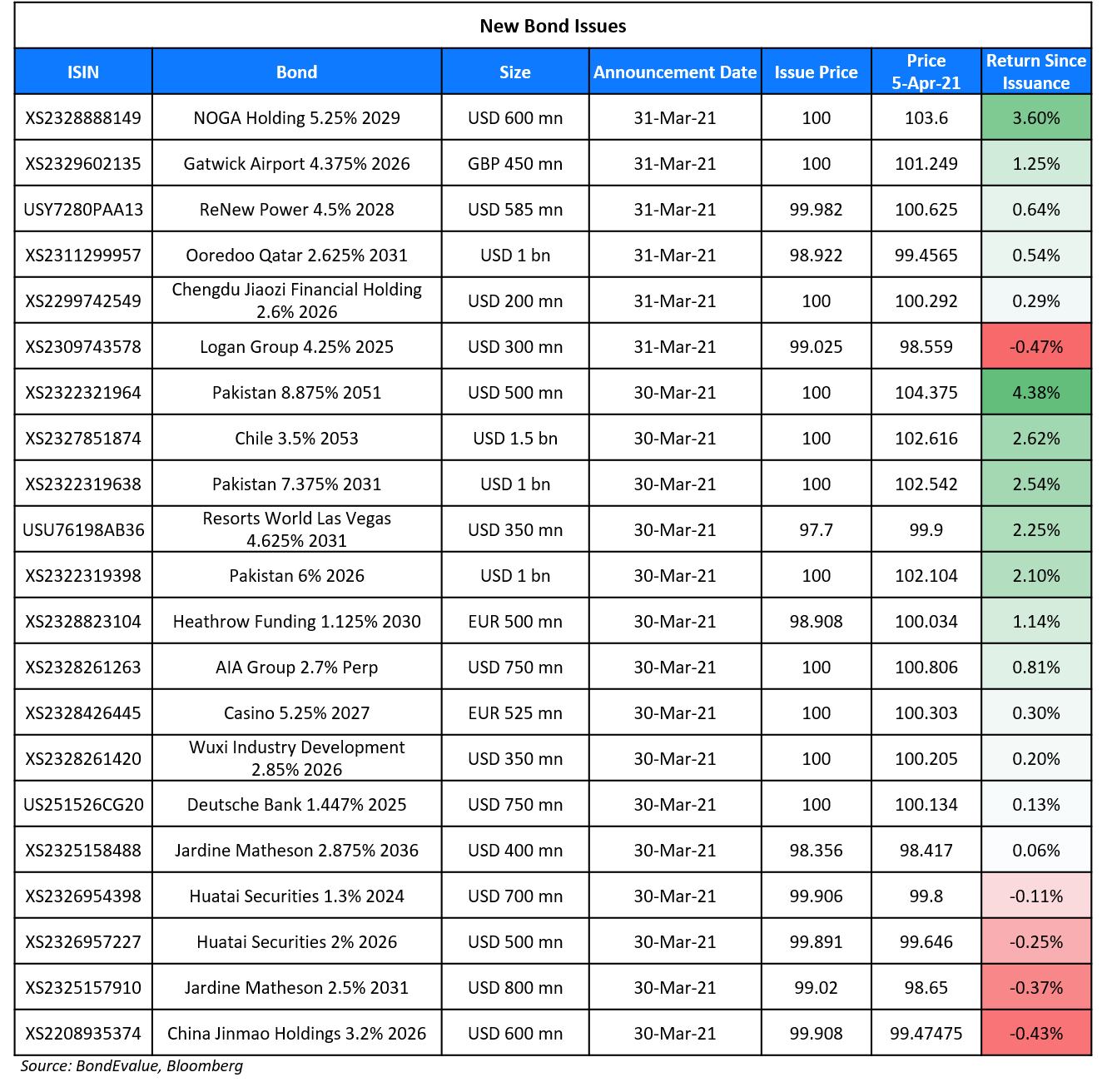 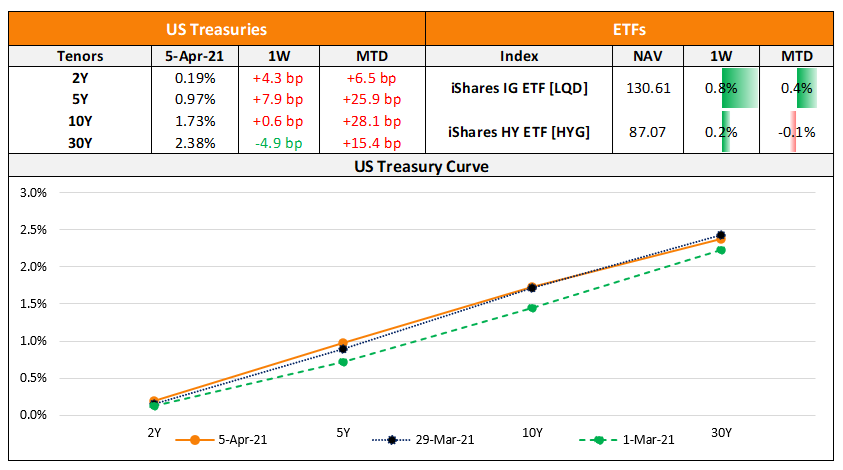 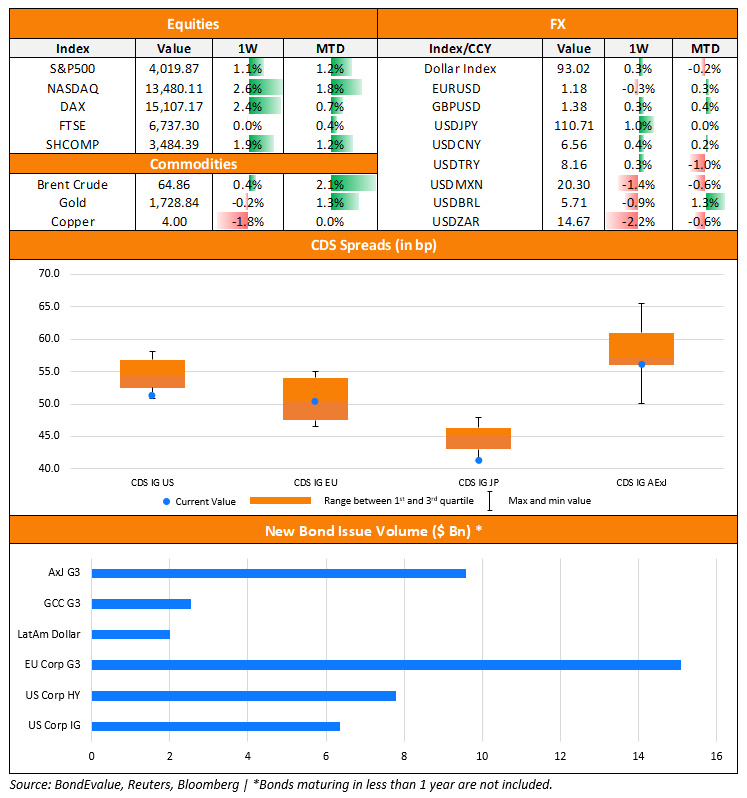 US primary market issuances fell sharply to $15bn, down 59% vs. $36.7bn the week prior. The drop in issuance can be attributed to both IG at $6.4bn, down 77% WoW while HY fell 30% WoW to $7.8bn. The largest deals in the IG space were led by Lowe’s $2bn dual-trancher and Hyundai Capital’s $1bn issue. In the HY space, Imola Merger Corp and Vine Energy led the tables with a $2bn and $950mn issue. In North America, there were a total of 36 upgrades and 39 downgrades combined, across the three major rating agencies last week. LatAm saw $2bn in new bond deals last week, almost flat vs. $1.9bn in the week prior led by Chile’s $1.5bn 32Y sustainability Formosa issuance. EU Corporate G3 issuance saw a sharp decrease last week to $15bn from $41.2bn in the week prior – Banque Federative du Credit Mutuel’s €1.5bn ($1.8bn) deal was the largest, followed by Dexia’s $1.28bn. Banco Sabadell, AXA and Commerzbank also raised €1bn ($1.18bn) each. GCC and Sukuk G3 issuances were at $2.6bn vs. $1bn in the week prior led by Qatari telecom operator Ooredoo’s $1bn 10Y issuance. APAC ex-Japan G3 issuances rose 58% WoW despite the holiday last Friday to $9.8bn vs. $6.2bn in the prior week. Pakistan led the table raising $2.5bn, followed by Jardine Matheson’s and Huatai’s $1.2bn new two-trancher bond deals. They were followed by AIA’s $750mn PerpNC5 Tier 2 bond, Pioneer’s $700mn 3Y and China Jinmao’s $600mn 5Y issues. APAC & ME ex-Japan G3 bond issuances hit a quarterly record of over $151bn surpassing Q2 2020’s issuance record of over $137bn. In the Asia ex-Japan region, there were 19 upgrades and 9 downgrades combined, across the three major rating agencies last week.

There are different types of bankruptcies in the US. Chapter 11 is know as the “reorganization” bankruptcy and is available to individuals, sole proprietorship, partnerships and corporations. Corporations file for chapter 11 so that they can continue to operate while being protected from creditors claims to collection activities and property repossession.

Petitions to file for chapter 11 can be voluntary or involuntary. In the case of a voluntary filing, the debtor must provide a schedule that provides details of its financial position. Upon filing a voluntary petition for relief under chapter 11 or, in an involuntary case, the entry of an order for relief, the debtor automatically assumes an additional identity as the “debtor in possession.” Once the petition is filed, there is an automatic stay order that suspends all judgments, foreclosures, collection activities, and property repossessions by creditors that arose before the petition.

The bankruptcy court requires debtors to propose a restructuring plan within 120 days from the date of filing, which then grants the debtor another 180 days to obtain confirmation of the restructuring plan. The plan is deemed to have been accepted by courts if it is accepted by creditors with at least two-thirds in amount and at least half of the number of allowed claims.

On Fed model showing bonds most attractive to stocks since 2010

“The 10-year yield finally passed the S&P 500 dividend yield and I think if those yields rise, it becomes a more and more attractive place to park some money,” said Mayfield. “There’s probably room for yields to continue to move higher — 1.75% could be an attractive level. But if yields continue to rise, the price of those bonds is going to feel it. So it’s a tough balancing act for sure, but they’re becoming more attractive.”

It’s been a particularly strong quarter for ESG. I’ve never really seen the market like this,” said Taneja.

Farnam Bidgoli, head of ESG solutions for EMEA at HSBC

“2021 has been dubbed the year of the SLB by a lot of market participants, so we expect that to continue to rise,” said Ahluwalia.

“The pandemic has contributed to recent record issuance and we expect issuance volumes to continue to grow,” said O’Callaghan.

“Despite everything we’ve seen in terms of the increase in tensions, we still haven’t seen China rapidly divest. It’s not a weapon they can use without hurting themselves,” said Gertken. “It’s just not a weapon China can use easily,” said Gertken. “China only owns about 5% of Treasuries, so they can move the needle but not much more than that.”

“It’s definitely something I think we have to be aware of but I’m not sure it’s as material as it used to be just given how large the debt stock is of the U.S.,” said Kloss. “As rates have backed up, it starts to become attractive to other foreign investors especially on a hedged basis, so they may step in to fill some of that void if China does back away,” said Kloss

“The debt tumbled too quickly before the Lunar New Year holiday, as traders bet the People’s Bank of China would tighten liquidity,” said Xie. “Now, with tighter monetary policy being priced in, the bonds have become resilient and steady.”

“Japan and China both have large current-account surpluses, which provide stable local funding for government expenditures and keep bond market volatility in check,” said Ishigane. Both the Japanese and Chinese bond markets may prove resilient “as an economic recovery continues to exert upward pressures on yields” worldwide, Ishigane said.

“Worries about a pandemic-driven recession are gone,” said Hu. “The top priority is to lower the economy’s debt burden.”

“This quarter can be big for the dollar and not necessarily amazing for emerging markets,” said Costa. “We don’t believe the U.S. curve is pretty much done adjusting. Between now and June/July, we could see a further leg higher here in yields.”

“We will look for any guidance on possible normalization of liquidity conditions,” Sen wrote. “At this juncture, the financial system is in a unique environment of excess liquidity but rising long-term yields on government securities”

“But that recovery is unlikely to be strong enough to get the MENA region’s output back to pre-pandemic levels,” Belhaj wrote, “the substantial borrowing that MENA governments had to incur to finance essential health and social protection measures boosted government debt dramatically.” 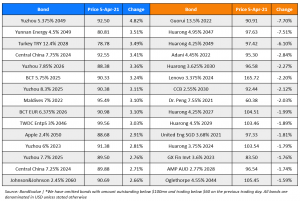