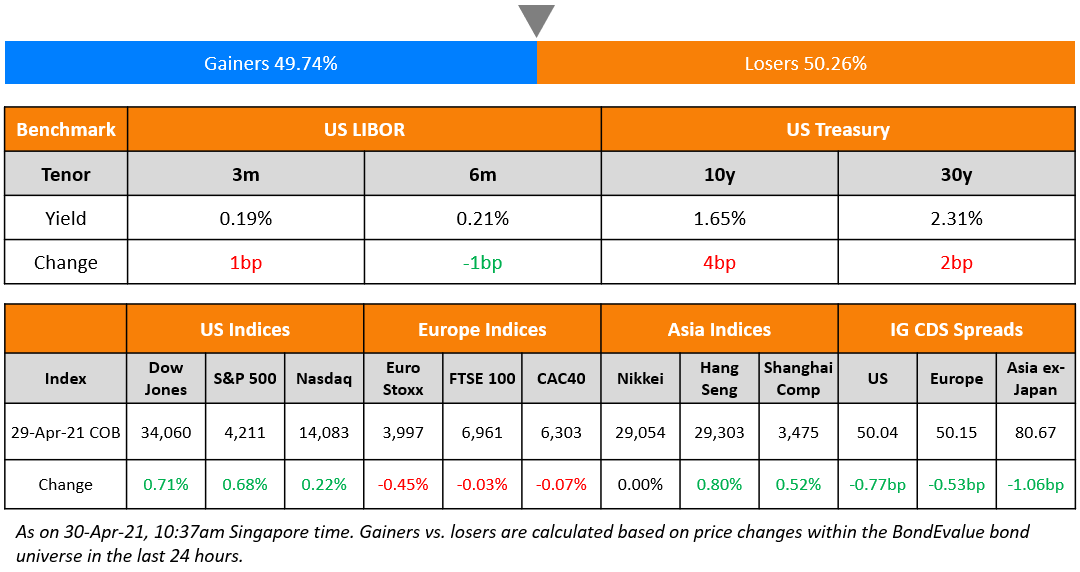 S&P climbed 0.7% and Nasdaq was 0.2% higher. Macro data came in positive with US GDP printing a 6.4% annualized increase in 1Q2021, beating forecasts of a 6.1% rise. Initial jobless claims for the prior week fell by 13k to 553k. US 10Y Treasury yields pushed higher to 1.65%. European equities were more subdued with the FTSE and CAC almost flat while DAX fell 0.9%. Turkey’s Central Bank raised its inflation forecast for this year with the new governor Sahap Kavciglou saying that the inflation outlook would require him to keep policy rates above the “actual and expected rate of inflation” to maintain a strong, disinflationary impact. The central bank expects April CPI to come in at 12.2% YoY as compared to earlier forecasts of 9.4%. The Lira rallied 0.7% on the report. US IG CDS spreads were 0.8bp tighter and HY tightened 3.6bp. EU main CDS spreads were 0.5bp tighter and crossover spreads tightened 2.3bp. Asian equity markets are trading lower by 0.3% today and Asia ex-Japan CDS spreads were 1.1bp tighter. 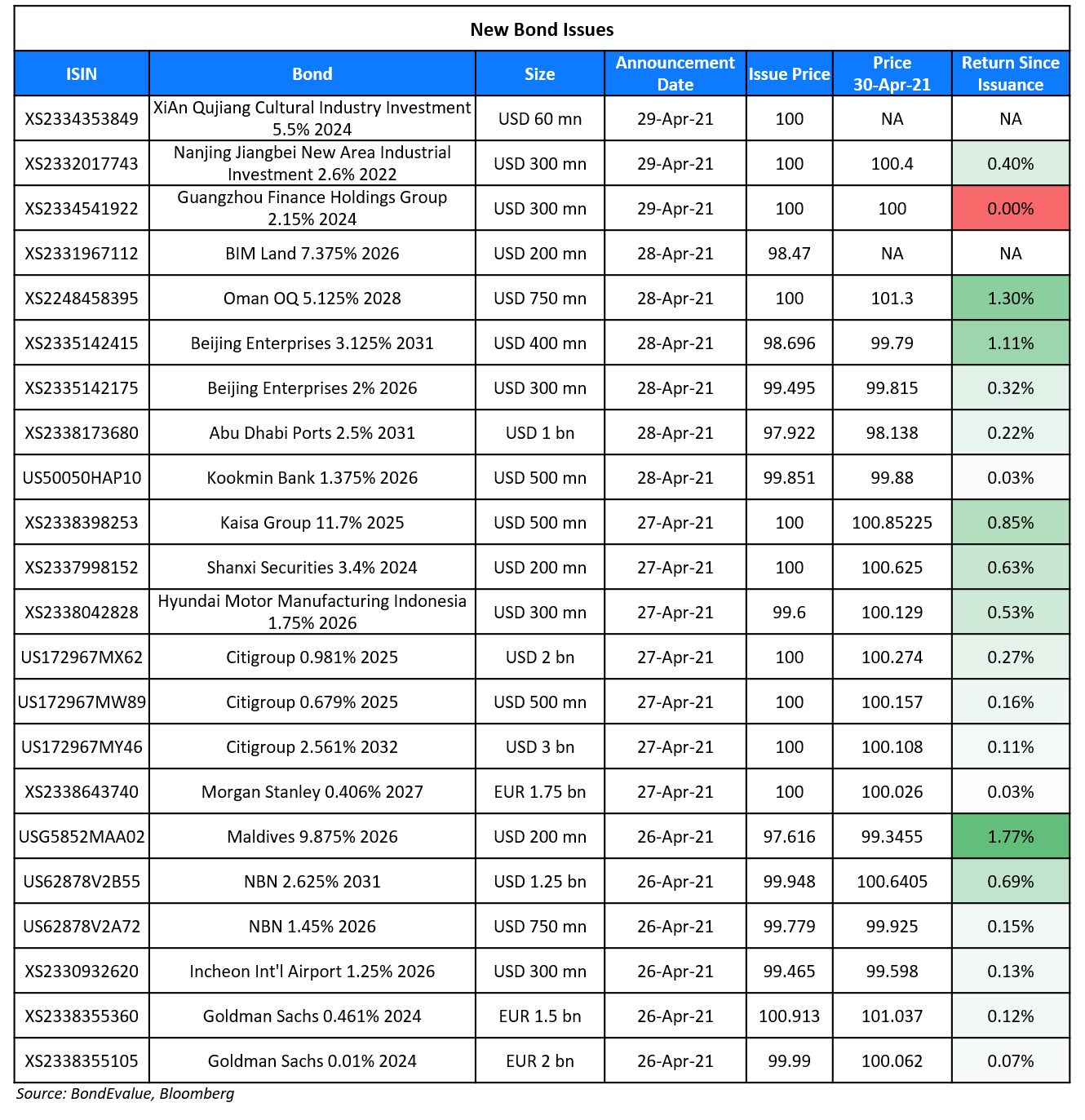 Guangzhou Finance Holdings Group raised $300mn via a 3Y at a yield of 2.15%, a massive 60bp inside initial guidance of 2.75% area. The bonds have expected ratings of A-, and received orders over $2.3bn, ~7.7x issue size. The bonds will be issued by wholly owned BVI subsidiary Guang Ying Investment and guaranteed by Guangzhou Finance Holdings Group. Proceeds will be used for refinancing and general corporate purposes.

Common Equity Tier 1 (CET1) ratio is a financial ratio applicable to banks to measure its core capital as against its Risk Weighted Assets (RWA). Core Capital (CET1 Capital) includes common equity and stock surplus (share premium), retained earnings, statutory reserves, other disclosed free reserves, capital reserves representing surplus arising out of sale proceeds of assets and balance in income statement at the end of the previous financial year. RWAs are calculated to measure the minimum regulatory capital required to be held by banks to maintain solvency. The calculation methodology is such that the riskier the asset, the higher the RWAs and the greater the amount of regulatory capital required. CET1 capital must be at least 4.5% of RWAs according to Basel III.

Contingent Convertible (CoCos) bonds/AT1s commonly have triggers based on CET1 ratios – for example, if the bank’s CET1 ratio falls below a certain threshold, the bonds would convert into equity.

On China’s ‘problematic’ local debt in the spotlight Wu Xiaoqiu, a professor of finance at Renmin University of China

“Local debt issues, which reflect the resource-funded growth model, are problematic…It has become a political requirement…We must lower the [local] government ratio as much as we can, so as not to derail economic growth this year.”

“Serious issues, including unlicensed fintech businesses, companies running financial businesses beyond the permitted business operations … and infringements of the lawful rights and interests of consumers are practices widely seen among online financial platforms.”

On Refinancing to surge with record Asia bonds due

“A lot of the issuers who have come to the market have already done so, hence incremental volume from new issuers and existing borrowers who want to raise money will be more modest over time”

“Out of the major players in Asia, I am seeing an uptick in distressed situations in Indonesia. There have been some pretty hefty PRC offshore bond defaults this year which indicates a level of distress onshore, although the amounts are still small in comparison to the size of the onshore bond market” 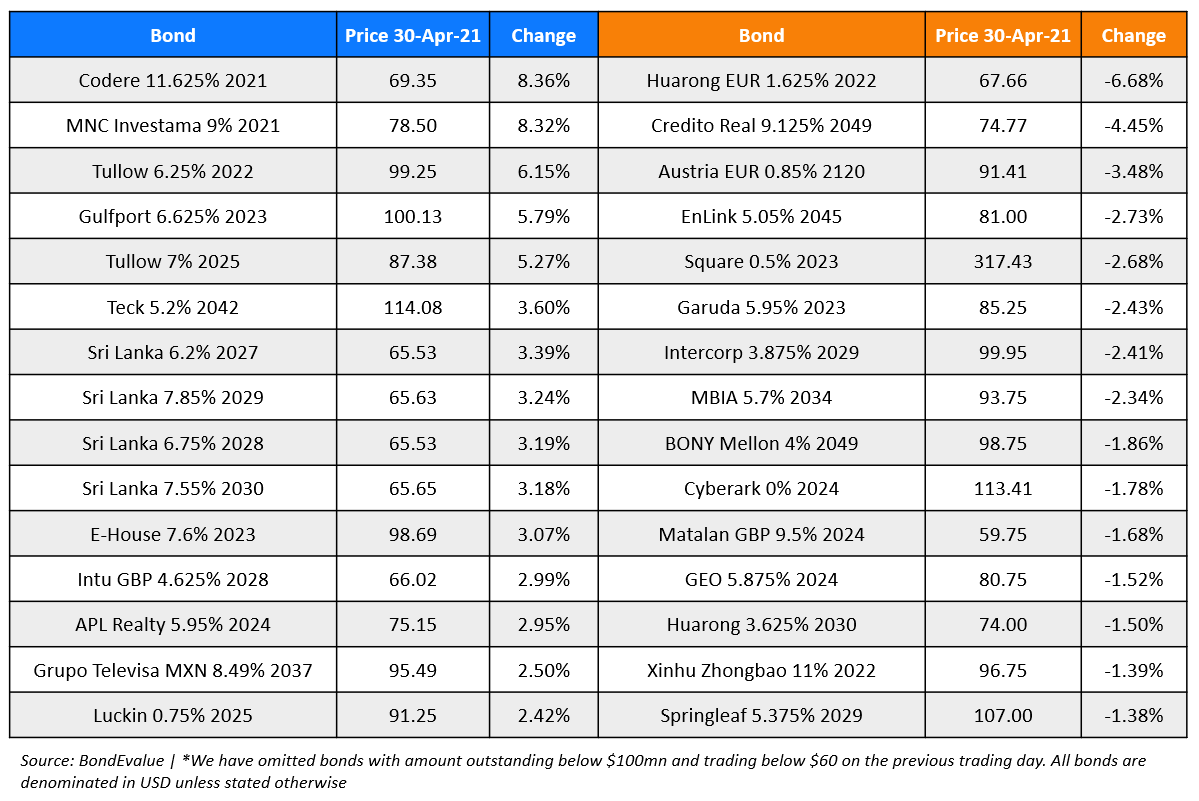