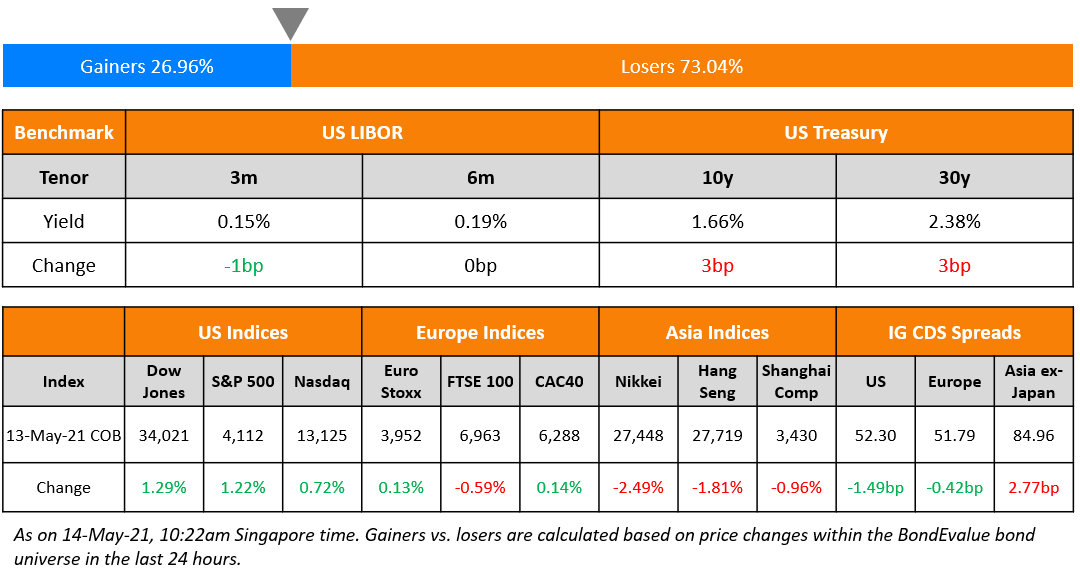 S&P rose 1.2% yesterday and Nasdaq was up 0.7%, slightly recovering losses in the prior few days. US 10Y yields had risen ~10bp to 1.70% on Wednesday in the aftermath of the inflation report, but cooled-off yesterday to 1.66%. Headline and Core CPI rose by 4.2% and 3% YoY, significantly above forecasts even after accounting for base effects causing a rout in equities. Despite the rise in inflation, Fed’s Vice-Chair Richard Clarida played down fears citing transitory factors. Oil prices dropped 3% as the US pipeline reopened after the cyber attack after paying a $5mn ransom to the hackers. US IG CDS spreads tightened 1.5bp and HY spreads tightened 6.6bp. EU main and crossover spreads tightened 0.4bp and 1.8bp. Asian equity indices have started positive, up over 1% while Asia ex-Japan CDS spreads are 2.8bp wider. 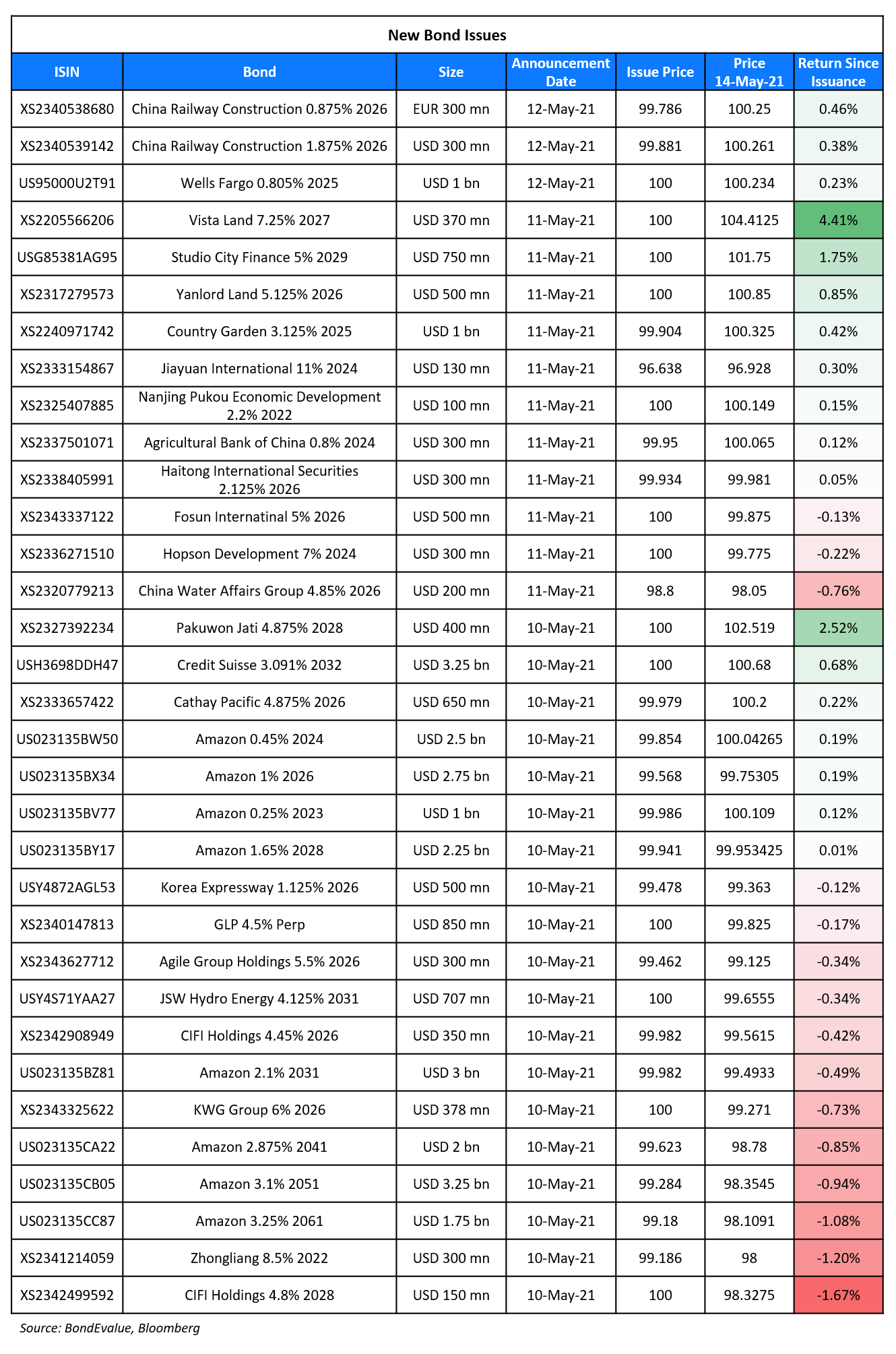 China Railway Construction raised $662mn via a dual-currency bonds. It raised $300mn via 5Y tranche at a yield of 1.9% or T+105bp, 50p inside the initial guidance of T+155 area. It also raised EUR 300mn ($362mn) via 5Y bonds at a yield of 0.919% or MS+115bp, 40bp inside the initial guidance of M+155 area. The bonds have an expected rating of A-. The $ bonds received orders over $1bn, 3.3x issue size, and the the EUR bonds received final orders over EUR 1bn ($1.2bn), 3.3x issue size. Asia took 100% of $ bonds and 86% of EUR bonds. Europe took the remaining EUR bonds. Banks and financial institutions took 89% of the dollar bonds and 78% of the EUR bonds. Fund/Asset managers took 8% and 13% of the USD and EUR bonds respectively with the remaining going to central banks, private banks, insurance and corporates. CRCC Hean will issuer and Hong Kong and Shanghai-listed parent company the guarantor. Proceeds will be used for debt repayment and for overseas construction projects.

JPMorgan raised $1.85bn via a Perpetual non-call 5Y (PerpNC5) instrument at a yield of 4.625%, 12.5bp inside initial guidance of 4.75% area. The deal was upsized from $500mn initially and the amount issued is to the tune of 74mn depositary shares. The instrument has an optional redemption on any dividend payment date on or after June 1, 2026, or at any time following a “capital treatment event” and are callable at a price of $25. The instrument is structured as depositary shares each representing 1/400th interest in a share of JPMorgan’s non-cumulative preferred stock, Series LL. Proceeds will be used for general corporate purposes.

Loan loss provision are essentially amounts that are required to be set aside against impairments on loans. These ‘impaired’ loans are bucketed into different categories based on how long payments are overdue (for example, sub-standard, doubtful, defaults) and different levels of provisioning are required against these types of loans. Hence if a bank overprovisions during a certain period and losses turn out to be less than expected, the bank may release some of the provisioning (impairment release), helping its income statement whereas an increase in provisioning (impairment charge/addition) may hurt its income statement. Nowadays, banks also provide for expected credit losses (ECL) which are also organized into different tiers. ABN Amro reported a net release of impairments of €77mn (93mn) for the quarter vs. 1Q2020’s €1.1bn ($1.3bn) addition.

On bond yields edging lower as investors snap up technology stocks and shrugged off worries over rising prices
Nicholas Colas, co-founder of DataTrek Research
“We’re certainly oversold here, so remember our 5-percent maxim: buy every S&P 500 down 5 percent close after the first one,” said Colas.
Jeremy Gatto, investment manager at Unigestion
“Inflation pressures are going to be rising, and they’re not going to be temporary,” said . “What does that mean? Effectively that (interest) rates will be rising.”
On Eurozone bond yields rising after strong US CPI data
Massimiliano Maxia, senior fixed income specialist at Allianz Global Investors
“We expect higher yields on the longer maturities, with the 10-year Treasury testing the 1.8% area in a short time and the 10-year Bund rising towards a 0% yield,” said Maxia. “Today’s figures need confirmation in the next two months to establish that inflation is structurally higher,” Maxia added.
According to ING analysts
“There is a strong tendency for bond sell-offs to be self-perpetuating.” “This is particularly true as there seems to be a strong consensus in favour of higher rates. Our 0% target in 10Y Bund yields looks more within reach than ever, possibly this quarter.”

“It’s quite clear the Chinese government wants a more rational credit market,” said Lim.
Soo Cheon Lee, founder and chief investment officer of SC Lowy
“What’s going to happen onshore will clearly drive what’s going to happen offshore,” said Lee. In the case of China Fortune, he added, “even the onshore guys are struggling to figure out what’s going on”. China “cannot just squeeze the offshore guys, because a lot of China Inc still needs offshore funding as well”.
On investors’ bet that Sri Lankan will avoid debt on short-term notes – Piero Cingari, fixed-income strategist at AcomeA
“Given the latest improvement in the short-term liquidity conditions, we prefer to hold the shorter-end tenors,” said Cingari. 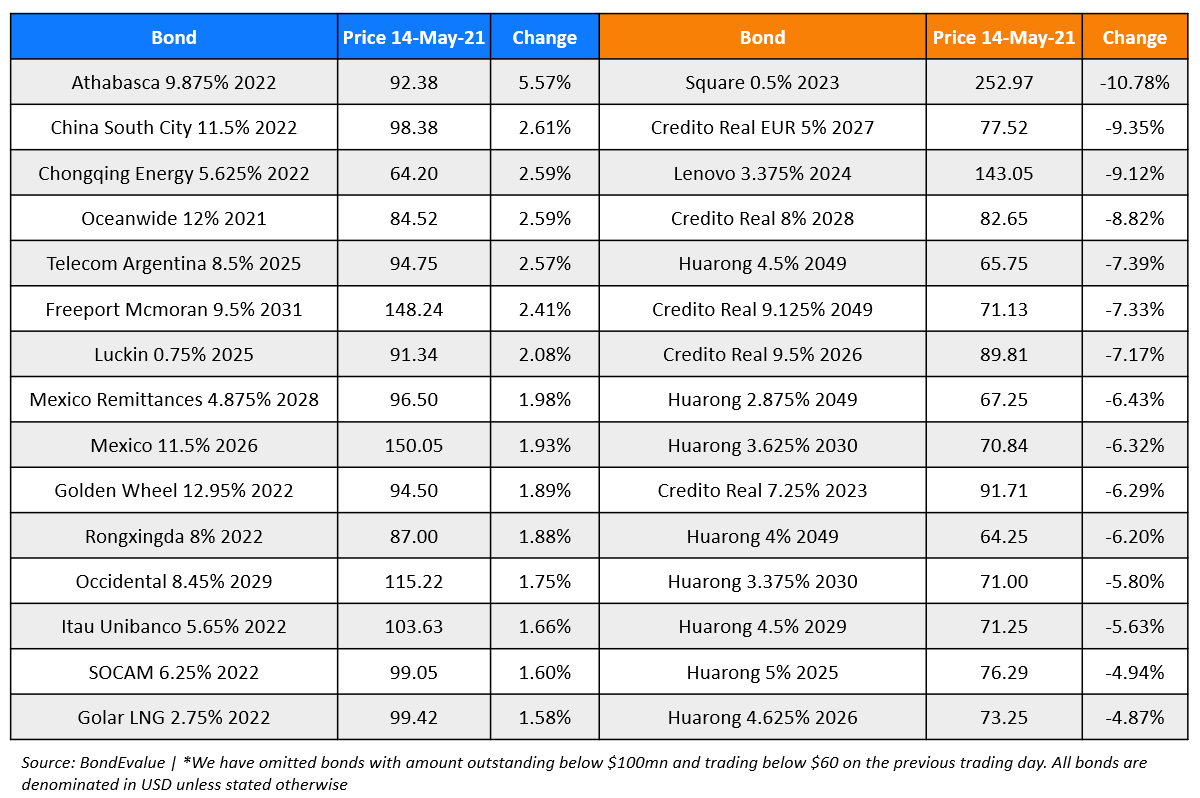