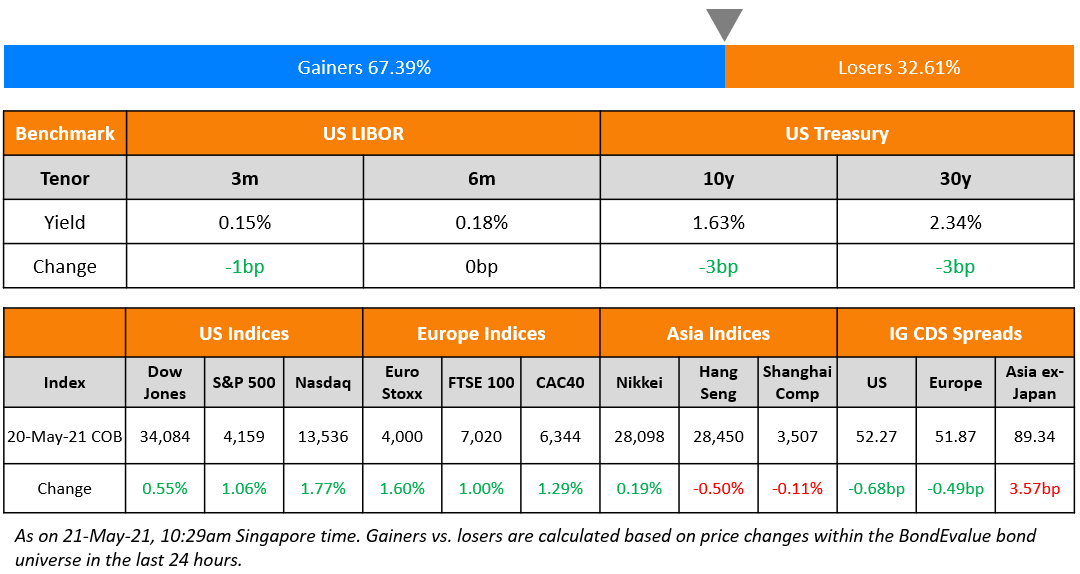 US markets broke the three day falling streak led by Tech stocks. S&P ended higher by 1% and Nasdaq was up by 1.8%. Tesla gained 4.1%, Apple rose 2.1% and Nvidia was up 3.9%. US 10Y Treasury yields fell ~3bp to 1.63% on the back of weaker than expected US Philly Fed manufacturing reading in May at 31.2, falling from 50.2 in April. On the other hand, US jobless claims dropped to 444k, better than expectations and indicating labor market momentum. European Indices were also up with DAX leading the gains, up 1.7% followed by CAC at 1.3% and FTSE at 1%. US IG CDS spreads were 0.7bp tighter and HY spreads were 4.4bp tighter. EU main spreads were 0.5bp tighter and crossover spreads widened 3bp. Asian equities started the day modestly lower ~0.3% with Asia ex-Japan CDS spreads widening 3.6bp. 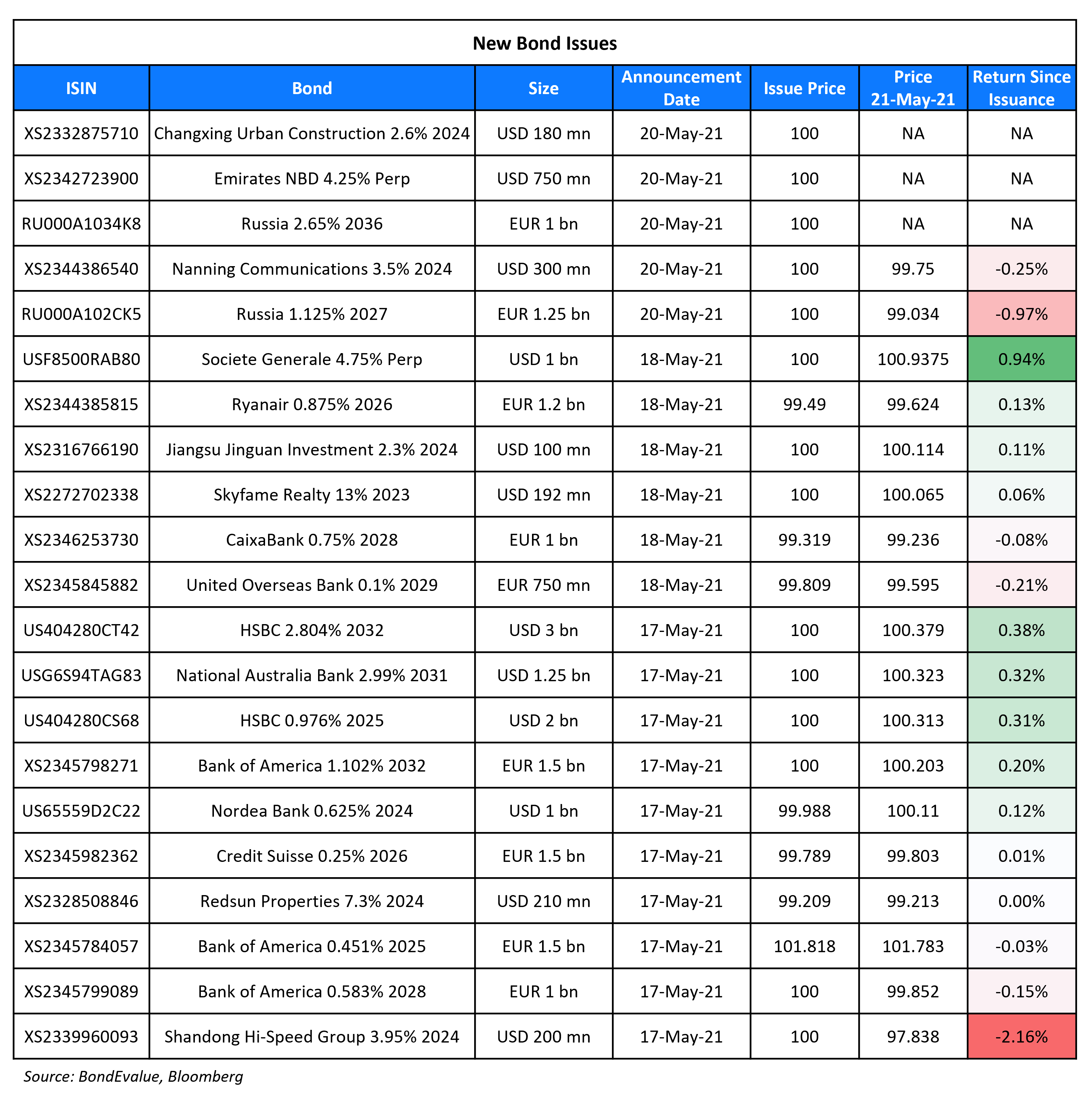 Keppel Land Ltd raised S$280m via a 5Y bond at a yield of 2%, or 5Y SOR + 99bp. The bonds were unrated and received orders over S$300mn, 1.1x the issue size. The issuance was upsized from S$150mn. Fund managers/insurance companies received 52%, public sector/banks 41% and private banks/corporates 7%. Singapore took 100% of the issuance. This is the lowest coupon for a Keppel Land 5Y deal in the last decade, said a banker following the deal.

Changxing Urban Construction raised $180mn via a 3Y credit-enhanced green bond at a yield of  2.6%, 20bp inside initial guidance of 2.8% area. The bonds were unrated and proceeds will be used for onshore project investment and construction, debt refinancing and working capital. The bonds have the support of an irrevocable standby letter of credit provided by Huishang Bank.

Nanning Communications Investment Group raised $300mn via a 3Y bond at a yield of 3.5%, 40bp inside initial guidance of 3.9% area. The bonds have expected ratings of BBB-, and received orders over $700mn, 2.7x issue size. Proceeds will be used to fund onshore project construction.

Join us for a complimentary webinar on how to leverage the BondEvalue App to better track and manage your bond investments. The session will cover key features of the App such as setting up your bond portfolio, screening for bonds, tracking new bond issues, setting up alerts and more. Click on the image below to register.

Hybrid bonds are called “hybrids” because they combine characteristics of both bonds and equities. These instruments may be issued by both banks and non-financial corporates. A common example of hybrid bonds would be perpetual bonds, which are fixed income securities without a maturity date (similar to equities) that pay a fixed coupon to holders (similar to bonds). Perpetuals typically have a call option, which allows the bond issuer to redeem the bonds at a fixed date. It is important to note that the option to redeem lies with the bond issuer, not the holder.
Lufthansa’s EUR Hybrids are making the news due to suspension of coupons, as covered above.

On Euro zone bond yields rising after Fed tapering hint
Andy Cossor, DZ Bank rates strategist
“European investors will look at the ECB and know it is not in the same position as the Fed”. “All the recent policy talk from the ECB has not been in the same direction as the Fed, so European investors can be a bit more relaxed about the monetary policy outlook.”
According to ING analysts
“Overall the shorter maturity of today’s sales should lessen the pressure compared to the past day’s longer deals but absent warm words from ECB officials, the rise in yields should resume.”
On Colombia’s plans to keep investor confidence after ratings cut
According to S&P Global Ratings
Colombia’s outlook “is stable, reflecting our view that economic recovery, coupled with certain fiscal measures, will stabilize the government’s recently worsening debt burden over the coming two to three years.”
Jose Manuel Restrepo, Colombia’s Finance Minister
“These are the three pillars which we will keep developing in order to maintain the confidence that markets have historically had in our country,” he said.

On the bet that Colombia will sink deeper into junk

In a note by Katherine Marney of JPMorgan
“It is highly likely that Fitch will choose to join them once the fate of the fiscal package is clarified, probably in 3Q, becoming the second agency to rate Colombia sub-investment grade.”
Simon Weaver of Morgan Stanley
“Exact timing is difficult, with the bottom line instead being that we think the downgrade is coming close enough for markets to trade on it.” “Another 50 basis point widening would at least bring Colombia closer to the level where other downgraded credits ended up trading six months after being downgraded, meaning around 240 bps for 10-year spreads,” Weaver said.
Lewis Jones, portfolio manager of emerging markets debt at William Blair Investment Management
“We believe that much of the news is already priced in to both hard currency and local currency denominated sovereign bonds,” said Jones.
On China’s scrutiny of shadow debt threatening to curb growth – John Sun, co-managing partner at Aplus Partners Management Co
“Polarization among Chinese developers will deepen this year, and more developers are likely to suffer from debt failures,” said Sun. Weaker developers “will need to sell assets to fight for survival, while some will likely default on their debt.”
On taking cues from equities to beat inflation – Eva Sun-Wai, fund manager at M&G Investments
“There is some appeal to the higher-yield developed-market curve such as Norway and Italy, where valuations are attractive and correlations to commodity and equity are higher,” she said. “Italy has been continually supported by the European Central Bank.” “Yields are getting cheaper and we are gradually reducing shorts, not completely bearish on duration outright,” Sun-Wai said. “I’m a bit cautious on Treasuries and the dollar as the U.S. is starting off with a large level of national debt post-Covid, and also with potential tapering on the horizon.”
“I suspect a lot of central banks resent being the first mover because it will increase their cost of capital,” she said. “All of them are trying to take baby steps in terms of policy normalization.” “Due to the virus concern, central banks should remain accommodative for now, which should be positive for the local curve, especially when U.S. rates settle down,” she said. “Asian local rates have better value than U.S. rates on a real yield basis, especially since the aggressive selloff we saw in the first quarter.”
On the outlook for India’s dollar bonds amid virus crisis – Sharon Chen and Sheenu Gupta, Bloomberg Intelligence analysts
“High-yield renewable bonds may be a safe haven amidst India’s virus outbreak.” “Indian airports’ bonds could face further downside in the near term but may rebound once the pandemic situation improves.” 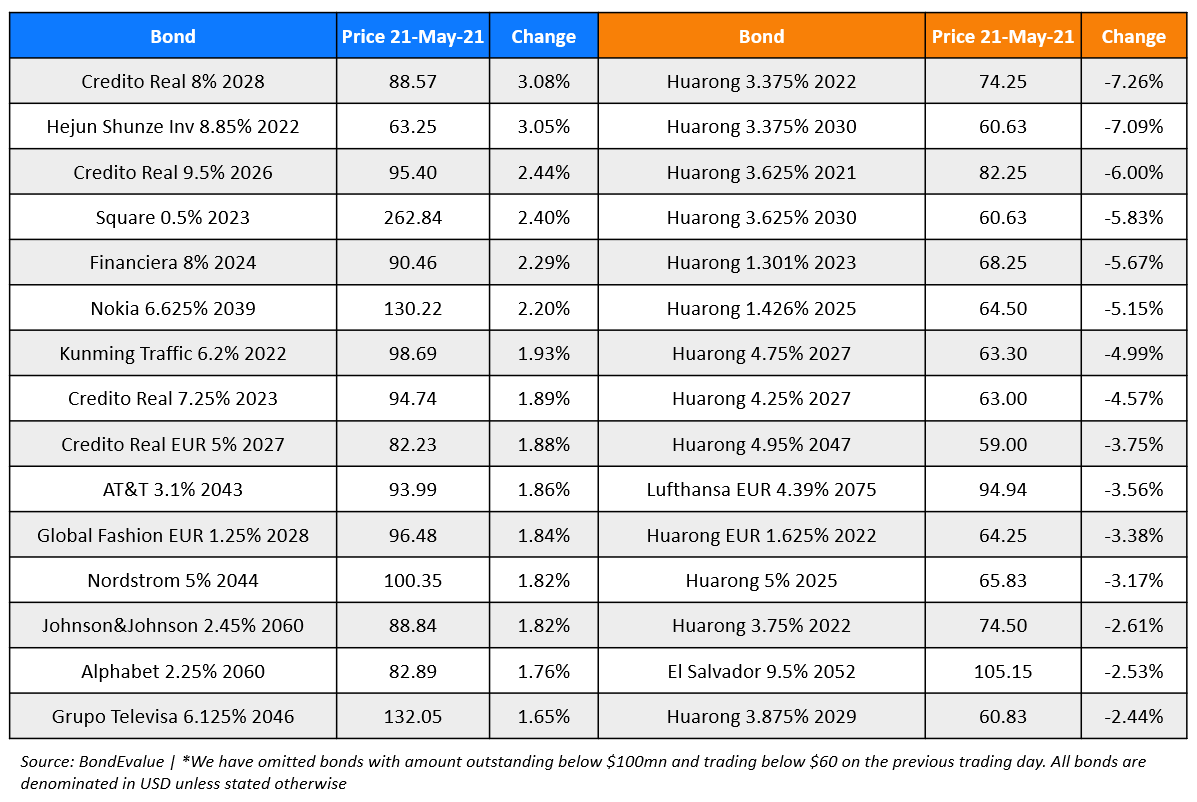