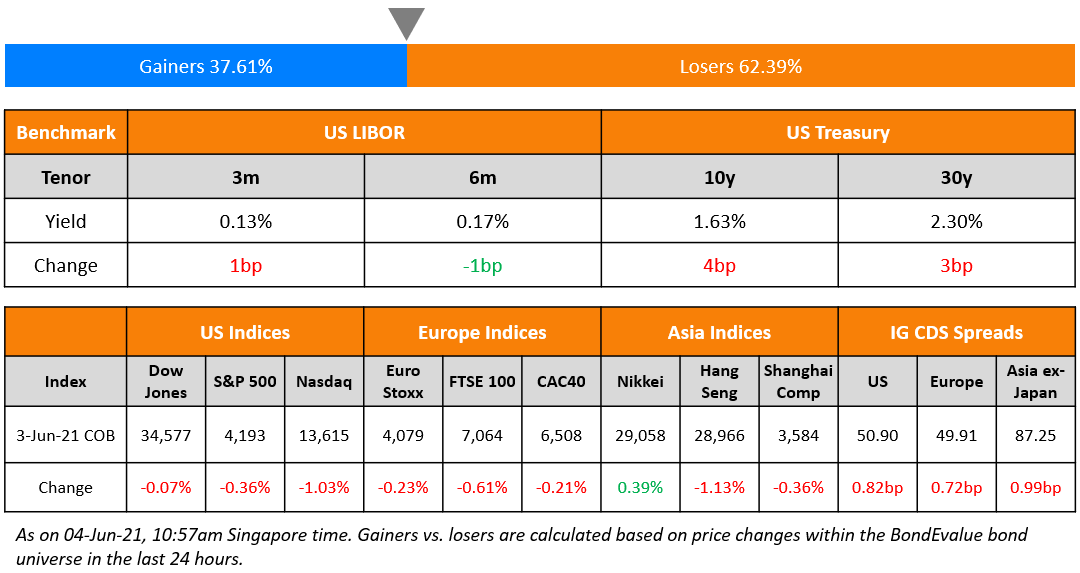 Broader stock markets ended lower even as the US labor markets strengthened with weekly jobless claims dropping below 400k for the first time since the pandemic started. The ADP May Employment Report revealed stronger than expected new jobs added of 978k. All eyes are now on the Non-Farm Payrolls numbers for May that will be released later today. The S&P was down 0.4% and Nasdaq was down 1.1% with Consumer Discretionary and IT down 1.2% and 0.9% respectively leading the losses. US 10Y Treasury yields were up 4bp to 1.63%. In Europe, FTSE and CAC were down 0.6% and 0.2% respectively while DAX closed higher by 0.2%. Both, US IG CDS and HY CDS spreads widened 0.8bp and 3.6bp. EU main and crossover spreads also widened 0.7bp and 3.22bp respectively. Asian stocks followed the US markets and are mixed – Nikkei is down 0.4% and Shanghai, Hang Seng are up 0.2% each with Asia ex-Japan CDS spreads widening 1bp. 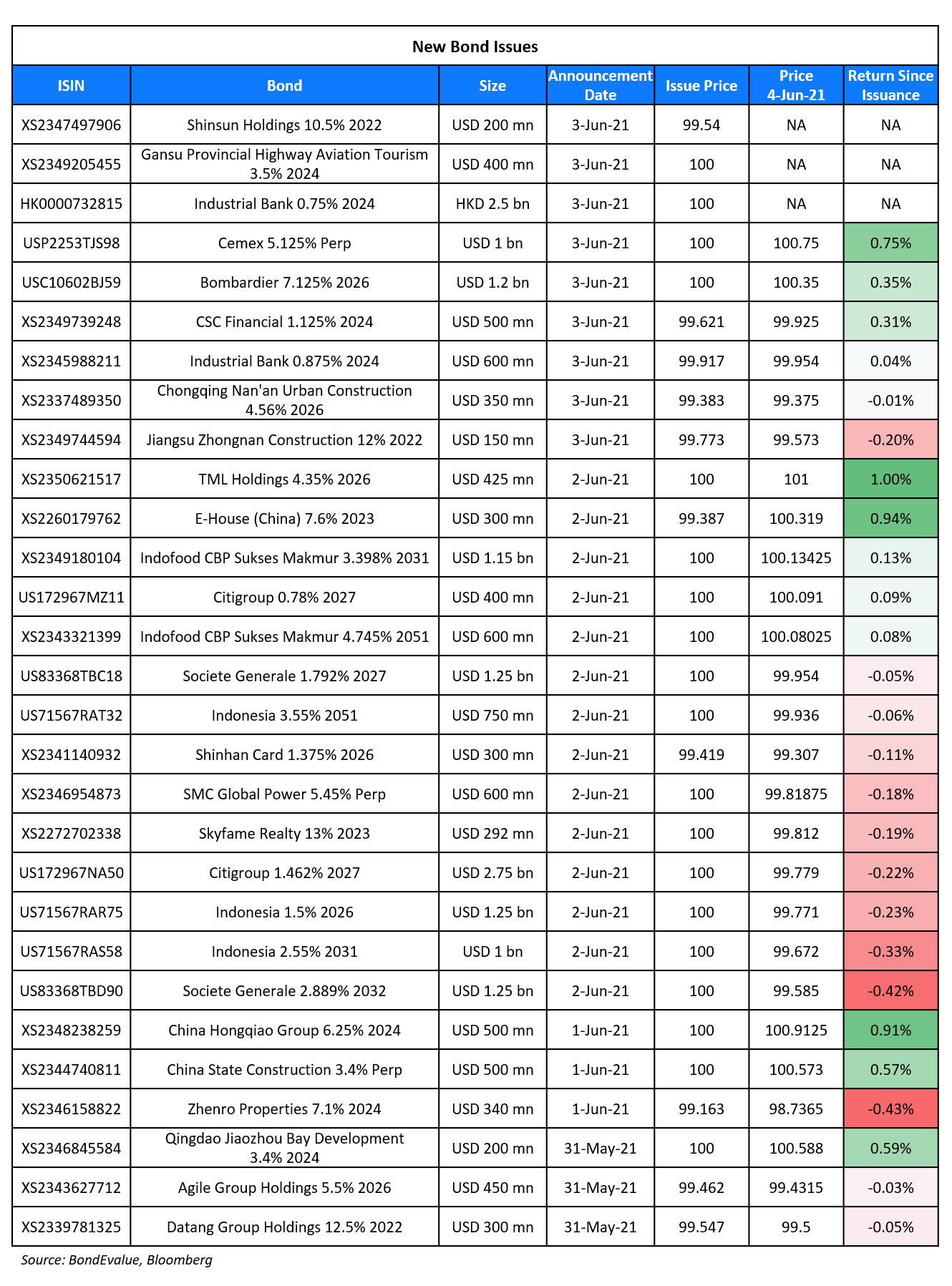 Mexican cement company Cemex raised $1bn via a Perpetual non-call 5.25Y (PerpNC5.25) bond at a yield of 5.125%, inside initial guidance of mid-high 5% area. The bonds have expected ratings of B. The notes received orders over $3.35bn~3.35 issue size. The perps are callable at par 3-month par call 5Y after issuance. After that, the coupon will reset to the 5Y US Treasury yield+428.4bp and have a coupon step-up of 25bp if not called after 5.25Y. The bonds are callable every six months thereafter. The new perp came after the call announcement of its 4.913% Perp trading at 99.99, yielding 4.88%.

CSC Financial raised $500mn via a 3Y bond at a yield of 1.254%, 47.5bp inside initial guidance of T+140bp area. The bonds were rated Baa1 and received orders over $3.5bn, 7x issue size. CSCIF Asia is the issuer and the Hong Kong and Shanghai-listed parent company is the guarantor. Proceeds will be used for refinancing and general corporate purposes.

Gansu Provincial Highway Aviation Tourism Investment raised $400mn via a 3Y bond at a yield of 3.5%, 30bp inside initial guidance of 3.8% area. The bonds were rated BBB and received orders over $750mn, 1.9x issue size. Proceeds will be used for debt refinancing.

Industrial Bank HK branch raised $600mn via a 3Y green bond at a yield of 0.903%, 37bp inside initial guidance of T+95bp area. The bonds were rated Baa2 and received orders over $3.3bn, 5.5x issue size. Proceeds will be used to finance and/or refinance green assets in renewable energy as well as low carbon and low emission transportation to help achieve China’s carbon neutrality goals. The bonds were issued alongside a HK$2.5bn ($322mn) 3Y green bond at a yield of 0.75%.

Jiangsu Zhongnan Construction raised $150mn via a 364-day note at a yield of 12.25%, 12.5p inside initial guidance of 12.375% area. The bonds have expected ratings of B2/B, and will be issued by Haimen Zhongnan Investment Development (International) and guaranteed by the Shenzhen-listed parent company. Proceeds will be used for offshore debt refinancing.

Chongqing NanAn Urban Construction & Development (CQNA) raised $350mn via a 5Y bond at a yield of 4.7%, 30bp inside initial guidance of 5% area. The bonds have expected ratings of BBB and received orders over $1.1bn, 3.1x issue size. Proceeds will be used for offshore debt refinancing.

Shinsun Holdings raised $200mn via a 364-day sustainable bond at a yield of 11%, 25bp inside initial guidance of 11.25% area. The bonds are unrated and received orders over $850bn, 4.25x issue size. Proceeds will be used for offshore debt refinancing.

A technical default is a non-compliance with technical requirements or covenants in the bond’s offer document or credit agreements. This need not have anything to do with missing a scheduled payment but have more to do with breaching specified conditions. These could include not adhering to negative covenants which require not to dispose of any assets, changing the nature of business, delaying results etc. Thus, a technical default need not have to deal with missing a payment and may still result in a full repayment. S&P analysts in a note mention that “If Huarong International fails to deliver the results by the deadline stipulated in the bond terms, it will be in technical default.”

“We’re still quite a ways off from reaching the ‘substantial progress’ that we’re really looking for in terms of adjustments to our purchases,” Williams said. “I just don’t think the time is now to take any action.” “Not only is the program working exactly as designed but we have the ability to tweak it,” he said.
On the limitations of Fed’s monetary policy in solving labour market “puzzle” – Robert Kaplan, Federal Reserve Bank of Dallas President
“If you were in a person-to-person job, you need more inducement to come back to that job.” “When unemployment benefits run out, we’ll find a balance.”
On the unexpected slow in Turkey’s inflation, raising rate cute pressure
Recep Tayyip Erdogan, Turkey President
“It’s an imperative that we lower interest rates. For that, we will reach July and August thereabouts so that rates can begin to fall.”
Sahap Kavcioglu, Turkey central bank Governor
“Expectations for an early easing of policy, which aren’t based on a just reasoning, need to disappear.”
Timothy Ash, a strategist at BlueBay Asset Management
“But caution here as these numbers may well have been distorted by the latest Covid lockdown.” “My sense is that this inflation still stays higher for longer and the central bank’s expectations of 12.2% inflation at year-end seem optimistic,” Ash said. “But this will fuel early rate cut calls – after Erdogan pointed to July/August albeit seemingly discounted by Governor Kavcioglu this week.”
On the view that inflation boost is still worth hedging – Dan Ivascyn, chief investment officer of Pacific Investment Management Co
“Our current thinking is that any type of inflation pressures will be transitory, but you’re not getting paid a lot of money to bet against inflation at this point,” Ivascyn said. “We remain quite defensive towards inflationary risks.” “We do think it makes sense to look for and source inflation protection within the fixed-income markets,” Ivascyn said, noting that hedges can still be bought “at a reasonable level.”
On global food prices posting biggest jump in decade – Helen Dickinson, BRC chief executive
“While prices are currently falling thanks to fierce competition between retailers, there are many cost pressures around the corner.” 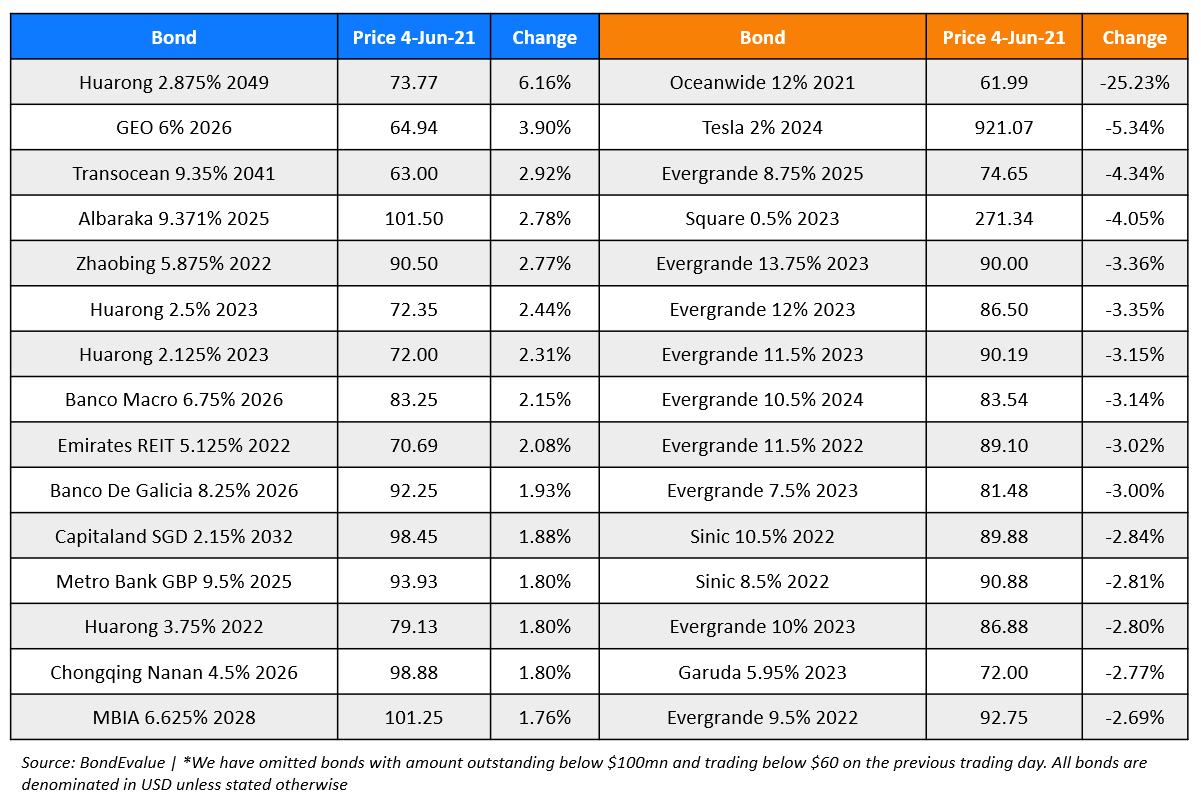