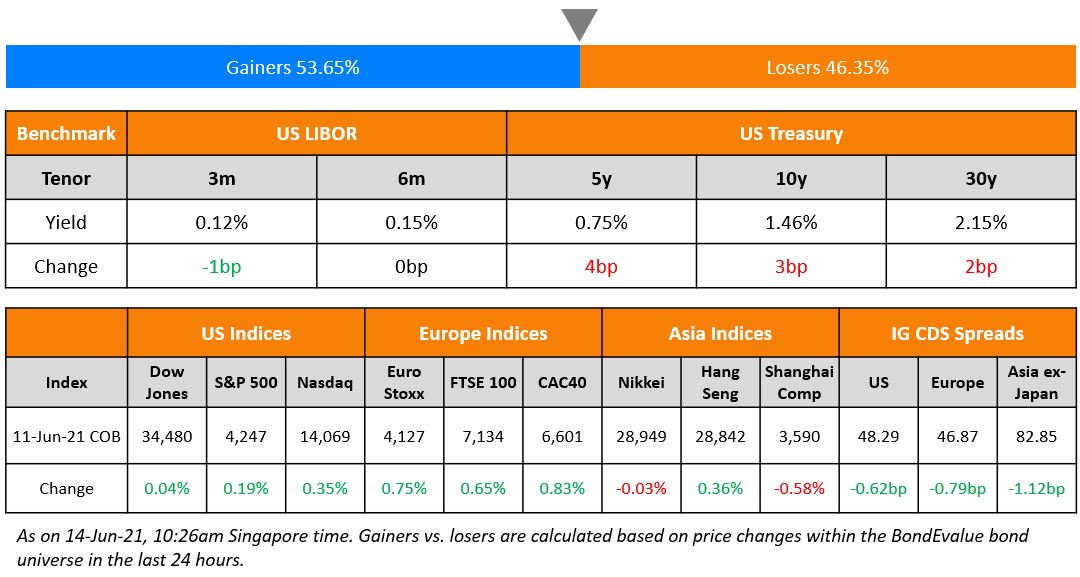 Wall Street ended the week on another high. S&P expanded its gains to squeeze out another record on Friday as it closed 0.2% higher while Nasdaq also gained 0.4%. Strategists say that the inflation witnessed in the US over the past two months is transitionary. Tech and Financials were 0.6% higher while Healthcare was down 0.7% as it reversed some of its earlier gains. US 10Y Treasury yields moved in a tight range to end at 1.46%. European stocks ended higher with DAX and CAC rallying 0.8% and FTSE gaining 0.7%. Spreads across witnessed another day of tightening – US IG and HY CDS tightened 0.6bp and 2.7bp respectively. EU main and crossover CDS also tightened by 0.8bp and 4.3bp respectively. In the Gulf, the Saudi TASI ended up 0.9% while UAE’s ADX was flat. In Latam, Brazil’s Bovespa was down 0.5%. Asian markets are flat with China and HK closed due to a holiday while Asia ex-Japan CDS spreads tightened 1.1bp. 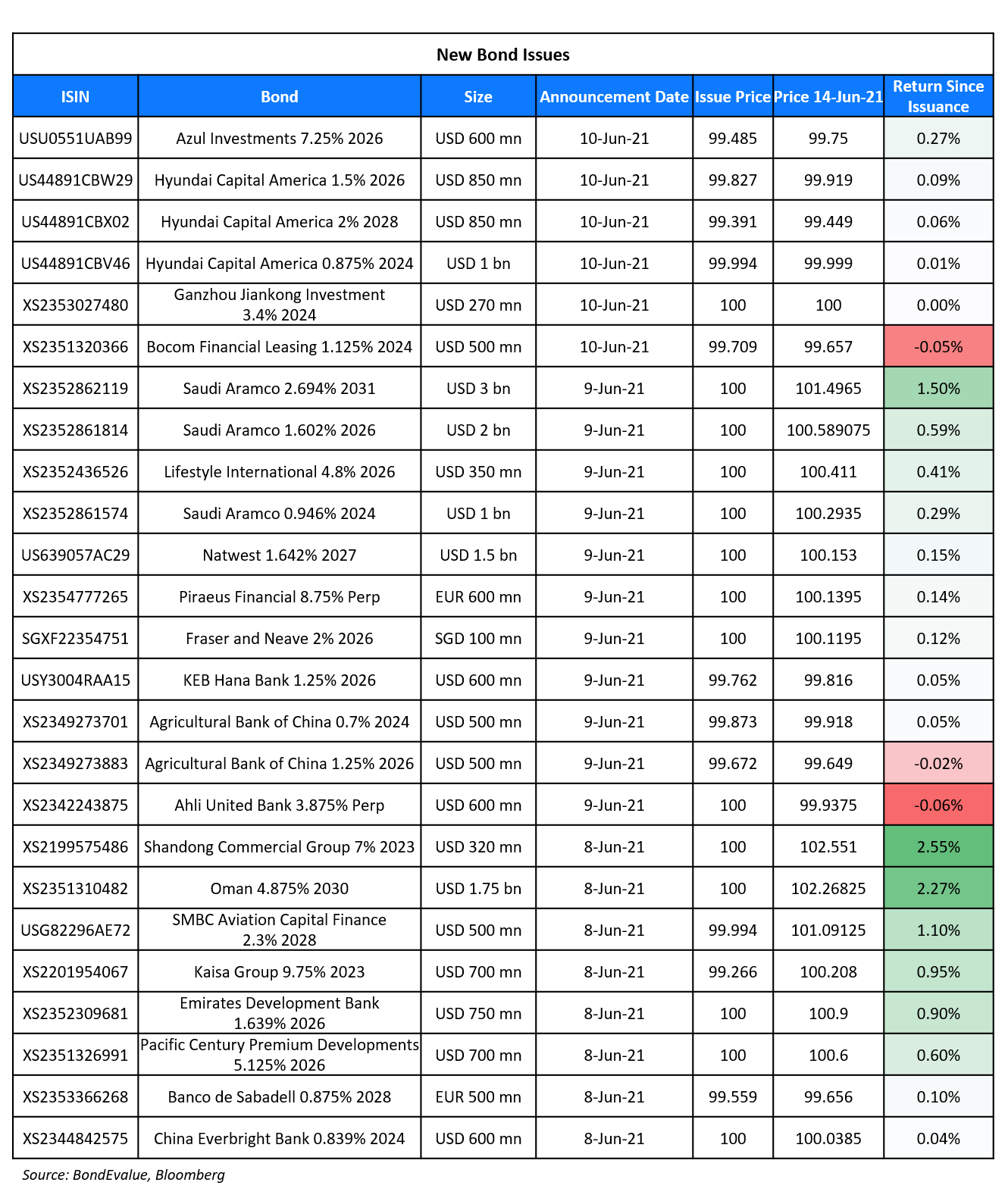 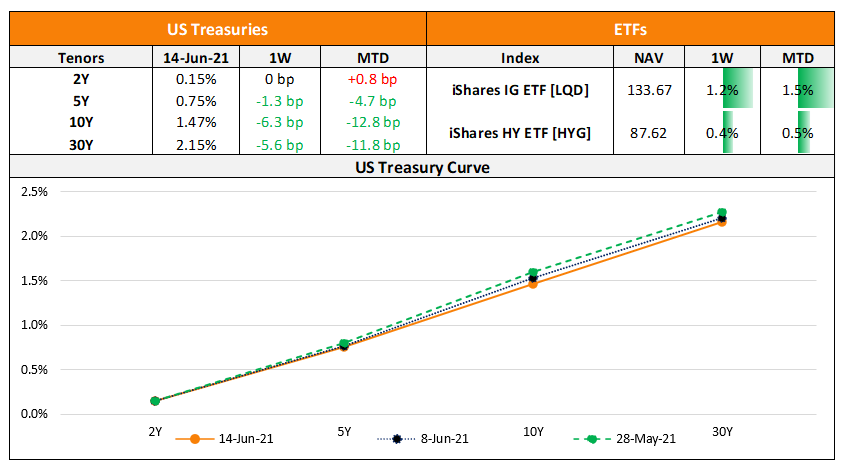 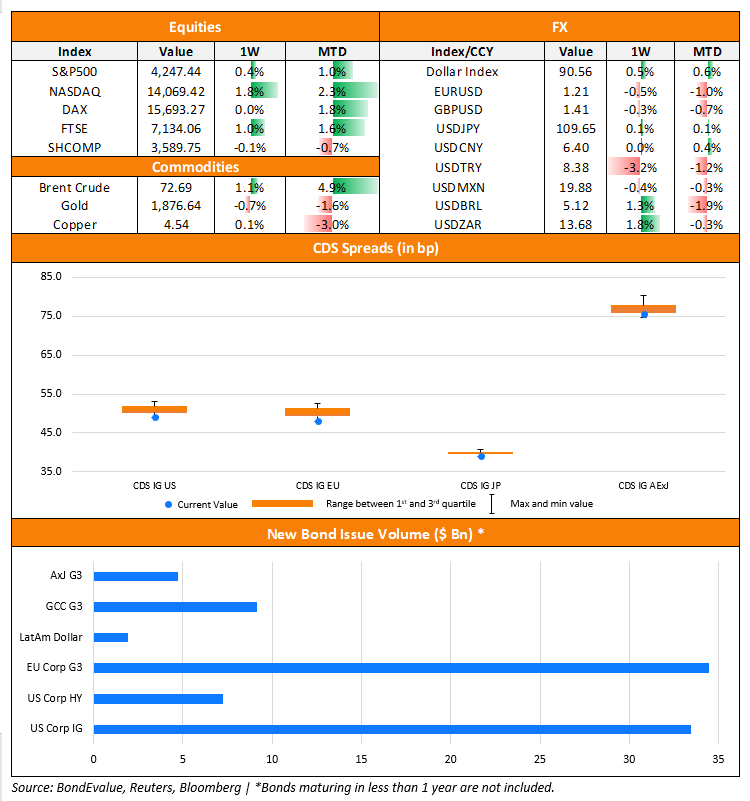 Rising stars are companies that have recently seen credit rating upgrades that pull its rating to investment grade category from its previous junk or high yield category. They are termed as rising stars as their financial and/or operational metrics show an improving trend. Meat company JBS is among the latest rising stars as its senior unsecured bonds were upgraded by a notch to BBB-. The opposite of rising stars are fallen angels, which are issuers that have been recently downgraded to junk category from its previous investment grade rating category.

On the unexpected recent fall in bond yields even as inflation jumps – Lawrence Summers, former US Treasury Secretary

“I didn’t anticipate the kind of decline in nominal yields that we’ve seen.” “I’m surprised. I would have expected that yields would have risen more.” “People think the Fed is just about the unemployment, not about the inflationary pressure so they take down their views about interest rates.” “Monetary policy has been getting steadily easier through this year even as the economy’s booming,” Summers said. “That defies good sense.”
On the expectations of frontloaded credit supply before Fed meeting – Drew Mogavero, co-head of U.S. credit trading at Barclays Plc
“Credit investors have got a nice little extra boost from the rally we’ve seen in Treasury prices.” “It allows them to focus on fundamentals, the good earnings picture we just had, and most importantly, the very low default rate environment.”
On global bond investors eyeing emerging markets that are ahead on inflation
Jon Harrison, managing director for emerging-market macro strategy at TS Lombard
“Investors will ultimately favor those countries in which central banks are able to get ahead of inflation.” “It’s essential that central banks react pro-actively.”
Edgardo Sternberg, co-manager for emerging-market debt portfolios at Loomis Sayles
“Appreciation limits the number of hikes as it lessens the risk of pass-through inflation,” said , which oversees $346 billion. The firm favors the shorter-end of the yield curve and prefers not to hedge against the dollar, he said.
Mary-Therese Barton, head of emerging-market debt at Pictet Asset Management
“We are cautious in the lower-yielding markets with high correlation to core rates and where risks of inflation becoming ‘un-anchored’ are most concerning.”
Michel Vernier, head of fixed income at Barclays Private Bank
A quick rise in US rates “can have negative repercussions.” “We have seen this during the 2013 taper tantrum when rates spikes at the U.S. long end caused major emerging-market outflows.”
On government bond prices rising and yields tumbling despite strongest inflation reading in 13 years
Andrea Iannelli, investment director at Fidelity International
“Last month people were looking at the pick-up in inflation and thinking central banks can’t possibly just stand by and not do anything.” “But investors are waking up to the fact that actually that’s exactly what they’re going to do.”
Ian Lyngen, head of US rates strategy at BMO Capital Markets
“We’ve fielded a variety of queries along the lines of ‘how long are the current distortions going to last?’”
On China Evergrande Group tycoon suffering huge losses as investors revolt – Lan Deng, professor at the University of Michigan
“If it was in trouble, it clearly would have a significant impact on the Chinese housing market and the general economy.” “Not only would it expose its lenders to greater financial risk, there could also be possible chain effects spreading across the different sectors of the Chinese economy, given how deeply the economy is tied to real estate development.” 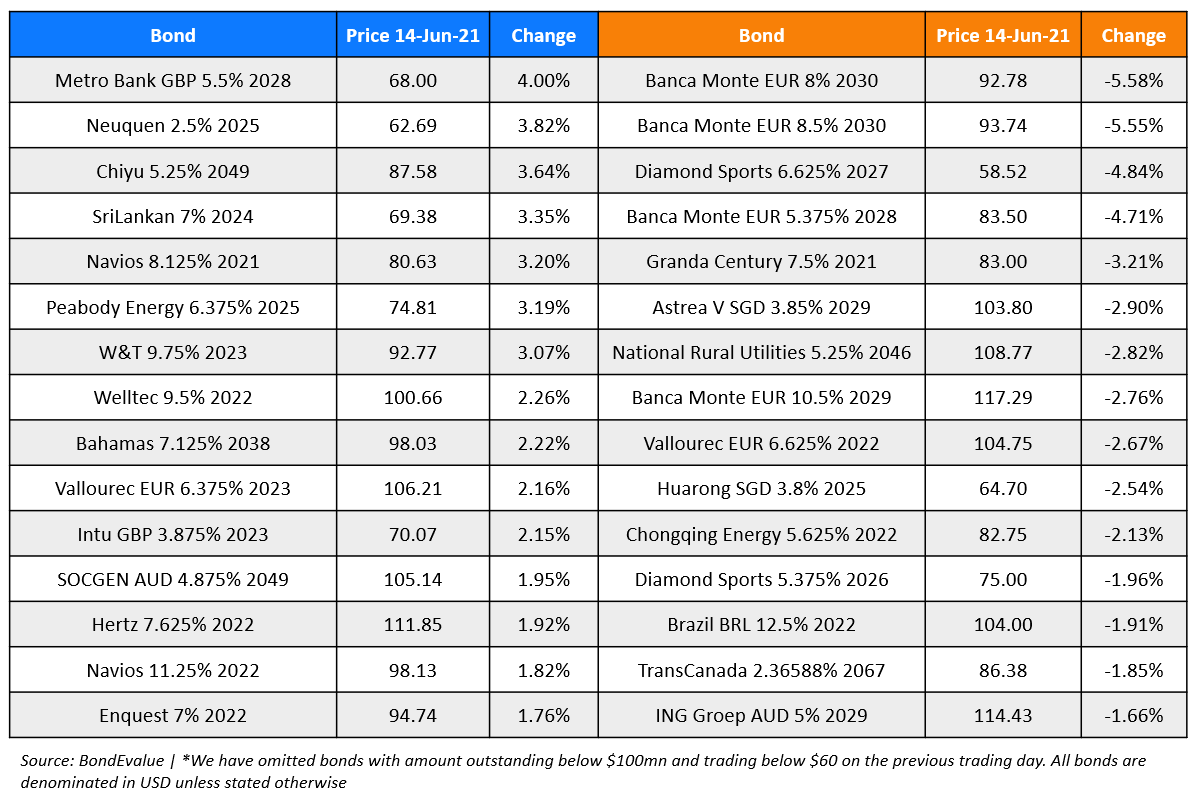