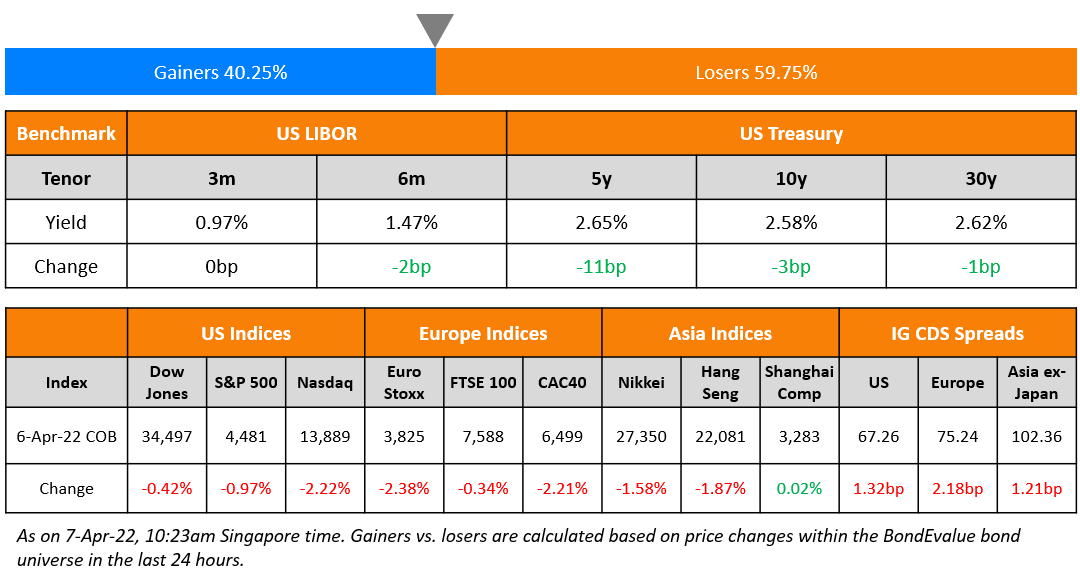 US equity markets dropped again on Wednesday with the S&P and Nasdaq down 1% and 2.2% each. Sectoral losses were led by Consumer Discretionary and IT, down over 2.5% each. US 10Y Treasury yields eased 3bp after a 20bp jump on Tuesday. European markets were lower – the DAX, CAC and FTSE were down 1.9%, 2.2% and 0.3%. Brazil’s Bovespa ended 0.6% lower. In the Middle East, UAE’s ADX was down 0.2% and Saudi TASI was up 0.4%. Asian markets have opened lower echoing the US markets – Shanghai and HSI were down 1% each and the STI and Nikkei were down 0.6% and 1.8% respectively. US IG CDS spreads widened 1.3bp and HY spreads were 8.2bp wider. EU Main CDS spreads were 2.2bp wider and Crossover CDS spreads were 11.6bp wider. Asia ex-Japan CDS spreads widened 1.2bp.

The FOMC’s March meeting minutes were released yesterday. It showed a roadmap to reducing its $9tn balance sheet. Fed officials proposed shrinking the balance sheet at a maximum monthly pace of $95bn/month i.e, monthly caps of $60bn in Treasuries and $35bn in MBS. This is almost double the pace of the peak run-off in 2017 of $50bn/month. Besides, members also showed support for a 50bp rate hike as and when appropriate at future meetings, evincing its hawkish stance. 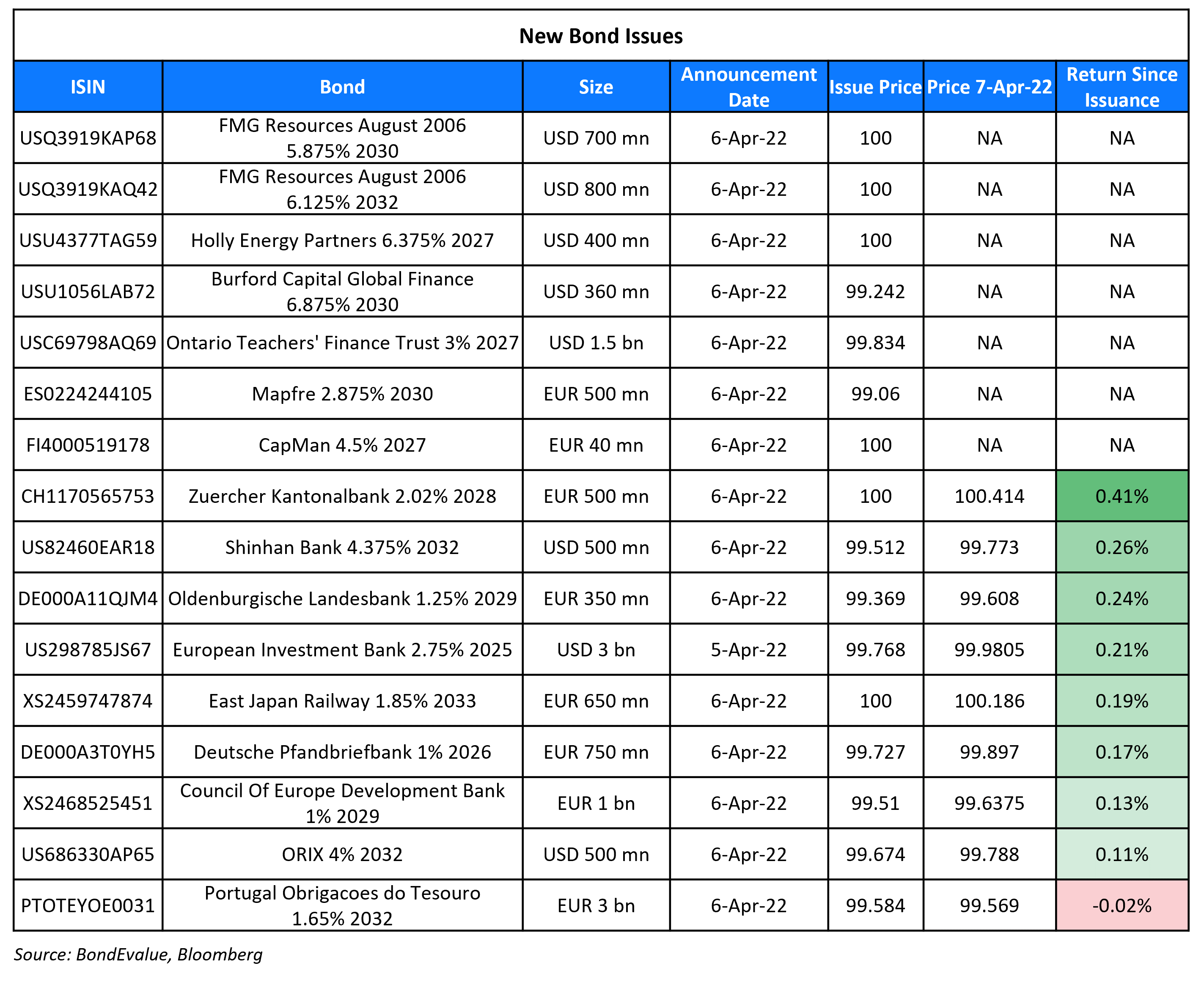 Shinhan Bank raised $500mn via a 10Y Tier 2 Climate bond at a yield of 4.436%, 40bp inside the initial guidance of T+225bp area. The bonds have expected ratings of Baa1/BBB+/BBB+, and received orders over $2.6bn, 5.2x issue size. Proceeds from the climate bond are to fund or refinance eligible green projects in the low carbon transport category in accordance with CBI criteria and the bank’s sustainable development goals financing framework. Sustainalytics provided a second-party opinion saying that Shinhan Bank plans to use the proceeds to refinance debt that funded inter-urban rail projects, particularly the Seoul Metro Line 9 and the Great Train eXpress Line A. These contribute to South Korea’s goal to achieve net zero emissions by 2050.  Asset and fund managers were allotted 69% of the deal, insurance companies and pension funds 23%, sovereign wealth funds 4% and banks and private banks 4%. Asia accounted for 59%, EMEA 16% and North America 25%.

Sri Lankan dollar bonds traded 4 points lower as economic and default worries grow. The President’s office said that Sri Lanka has appointed an advisory panel to guide how it can deal with its debt crisis and engage with outside lenders, including the IMF. The interactive chart below shows Sri Lanka’s bond maturity wall with the next payment due of $42.2mn on a dollar bond coupon on April 18. The next redemption due is of $1bn on its dollar bonds on 25 July.

The situation in the island nation is evolving every day, which can make it hard for investors to stay updated. To make things easier, we’ve put together an interactive dashboard with the latest updates on news related to Sri Lanka’s dollar bonds as well as updates with respect to Sri Lanka’s credit ratings, foreign exchange reserves, CDS spreads, bond maturity wall and more.

Russia said it has set aside rubles to pay its international bondholders on its dollar bonds. This is after the US Treasury blocked Russia from paying the bonds on Monday from frozen reserves held in US banks.

To track the latest updates and timelines on the Russia-Ukraine crisis and the impact on its bonds and CDS spreads, click on the link below to access a dashboard that will be updated regularly through the crisis.

Unifin Downgraded to BB- by Fitch

Mexican finance company Unifin Financiera S.A.B. de C.V. (Unifin) was downgraded to BB- from BB by Fitch on a downward revision of profitability assessment/business profile and low core metrics. Fitch also revised down Unifin's funding, liquidity and coverage assessment metrics. International markets contribute to about 58.4% of its total funding and Unifin's access has been reduced. Debt maturities over the next one year stand at ~25.5% of its total funding. The lender tapped local bond markets to raise funding recently and is raising funds via alternative strategies like short-term unsecured notes, credit lines etc. Fitch notes that its leverage metrics are "highly sensitive" - for example its debt-to-tangible equity rose to 7.7x in Q4 2021 from 6.3x the year before. Also, it notes that while NPLs were controlled in 2021 at 4.5%, asset quality has been pressured by increased charge-offs and foreclosed assets. Earnings were also a negative factor although it improved slightly in the previous year. Fitch says that profitability is not expected to "improve relevantly during 2022". Lastly, corporate governance issues also weigh on the company as it has focused on non-core strategies to sustain financial metrics i.e., acquisition of complex assets like oil rigs and repurchasing of bonds which prioritizes profitability instead of liquidity.

Road King Infrastructure was downgraded to B+ from BB-  by S&P on deteriorating leverage as margins normalize. Road King's EBITDA margin dropped to 22.1% in 2021 from 27.1% in 2020 and S&P expects it to stay low at 20-22% in 2022. Contracted sales could drop by 15-20% in 2022, it said, adding that sales declined significantly YoY in the first three months of 2022. The rating agency does expect the company to be selective and disciplined in acquiring new projects and focus on core markets in high-tier cities. While S&P expects gross debt to slightly decline in 2022 and 2023, its consolidated debt-to-EBITDA ratio is set to stay high at 8.4-8.6x during this time period.

HSBC increased its stake in Chinese joint venture HSBC Qianhai Securities, to 90% from the earlier 51%, after setting up the JV in 2017 . The move is said to be in-line with its statement last year to invest $6bn in Asia over a five-year period. The remaining 10% will be held by Qianhai Financial Holdings. The transaction amount was not disclosed. In May 2021, HSBC agreed to buy out its life insurance JV partner in China and take full control of the business. SCMP notes that the Qianhai economic zone is expected to increase in size to 120.6 sq km as part of a new expansion plan. This plan can be a boon for Hong Kong financial services companies that plan to to capitalize on rising income and wealth in the Greater Bay Area, it added.  "Our increasing stake in HSBC Qianhai Securities reflects our commitment in developing China's rapidly growing capital markets, and bolsters our presence in a key market for the HSBC Group", said David Liao, co-CEO of HSBC Asia-Pacific. 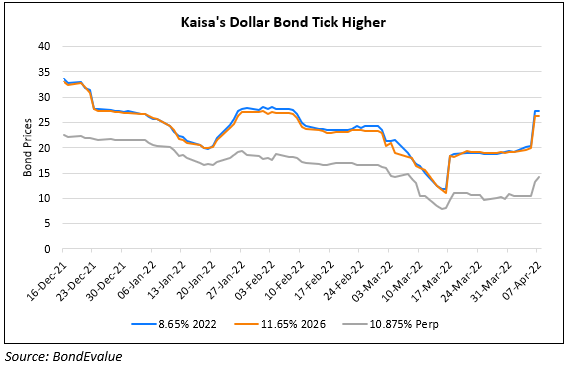 Separately, Powerlong Real Estate said that it remitted the funds to pay the remaining principal and interest on its maturing $190mn 3.9% dollar bond due April 13.

Transition bonds are bonds aimed at industries with high greenhouse gas (GHG) emissions a.k.a. "brown industries" to raise capital with the objective of becoming less brown and thereby shift to greener business activities. Industries issuing transition bonds could range from mining, utilities, transport, chemicals etc. These bonds are different from ‘Green Bonds’ in that the use of proceeds is less clear; also, the latter are generally issued by industries/companies already on the path of reducing emissions. Bloomberg says that transition bonds would help heavy polluters to raise capital in Canadian markets.

Explore BondbloX Kristals - a basket of single bonds listed on the BondbloX Exchange following themes such as SGD REIT Perps, USD Bank Perps, and SGD Bank Perps. Avail an introductory discount of $1,000 for every purchase of $100,000 worth of BondbloX Kristals*. Click on the banner below to know more.

On Fed Laying Out Plan to Prune Balance Sheet by $1.1 Trillion a Year

“The FOMC stayed far too easy for far too long and has belatedly realized their mistake. They are now scrambling to get policy back to neutral as quickly as they can.  Once they arrive at something close to neutral, they will have to ascertain over time how far into restrictive territory they have to move to get inflation back under control.”

“Against a highly uncertain and rapidly shifting economic backdrop, the Fed has shifted from talk to action. Financial conditions are going to remain volatile for much of the next six months as a result.”

“Asia has its challenges, or perhaps what I would call barriers of entry...Credit investing has a lot more regulatory hurdles to get through. By and large -- and this is a general statement -- countries would much more welcome equity investment rather than foreign debt.”

“Experience and relationships are critical in our view, as are onshore investing capabilities and infrastructure in more complex markets... Capital availability gaps remain a significant driver of opportunity in the region"

On BlackRock Among Investors to Pare Losing China Property Bets

“Investor confidence, rather than the fundamentals, is the key to watch for the China high yield sector"

“The market is running out of time and running out of steam. A lot of investors have been caught by surprise over the past couple of months. If you exit now, there’s zero upside, but at the same time there are no triggers for improvement.”

“Thai 10-year yields have been vulnerable to the surge in Treasury yields amid expectations for aggressive rate hikes from the Fed, as well as foreign investors reducing emerging-market bond exposure” 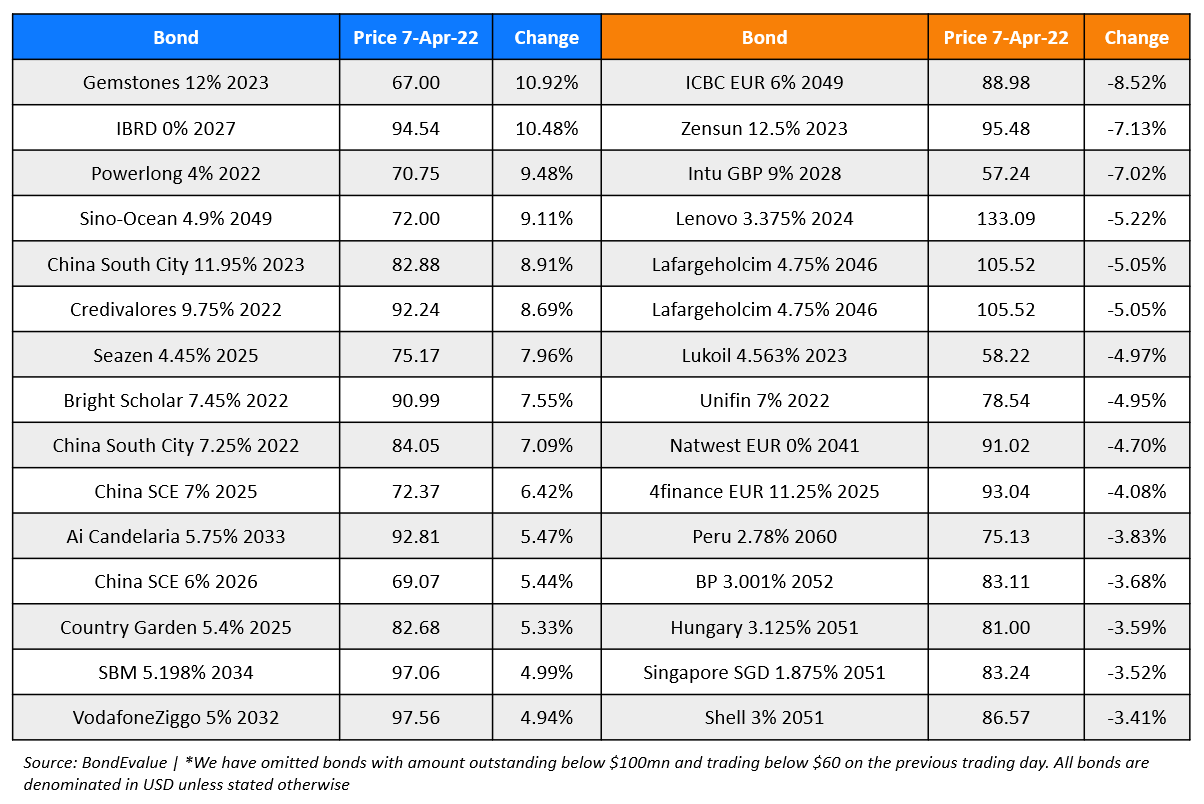