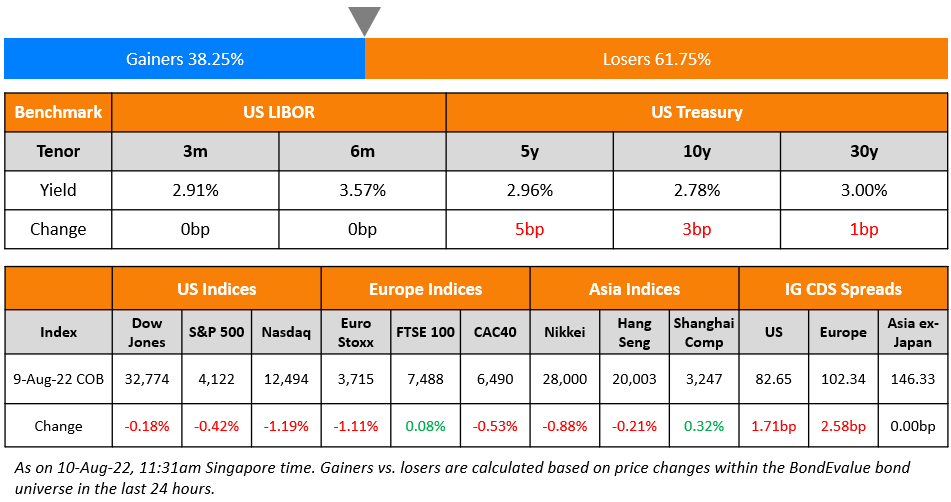 US equity markets ended lower on Tuesday with the S&P and Nasdaq down 0.4% and 1.2% respectively. Sectoral losses were led by Consumer Discretionary down by 1.5% and Information Technology down 1% while Energy was up 1.8%. US 10Y Treasury yields rose 3bp to 2.78%. European markets were mixed – DAX and CAC were down 1.1% and 0.5% respectively while FTSE was flat. Brazil’s Bovespa was up 0.2%. In the Middle East, UAE’s ADX and Saudi TASI rose 0.2% and 0.3% on respectively. Asian markets have opened mixed – Shanghai, Nikkei and HSI were down 0.4%, 0.7% and 2% respectively while STI was up 0.6% each. US IG CDS spreads widened 1.7bp and US HY spreads were wider by 15.1bp. EU Main CDS spreads were 2.6bp wider and Crossover spreads were widened by 13.8bp. Asia ex-Japan IG CDS spreads were unchanged.

Consumer prices in Mexico rose 8.15% for July, in-line with estimates of 8.14%. Rising food, energy prices and supply shocks led to higher inflation. The Mexican central bank is expected to hike interest rate by 75bp this week. 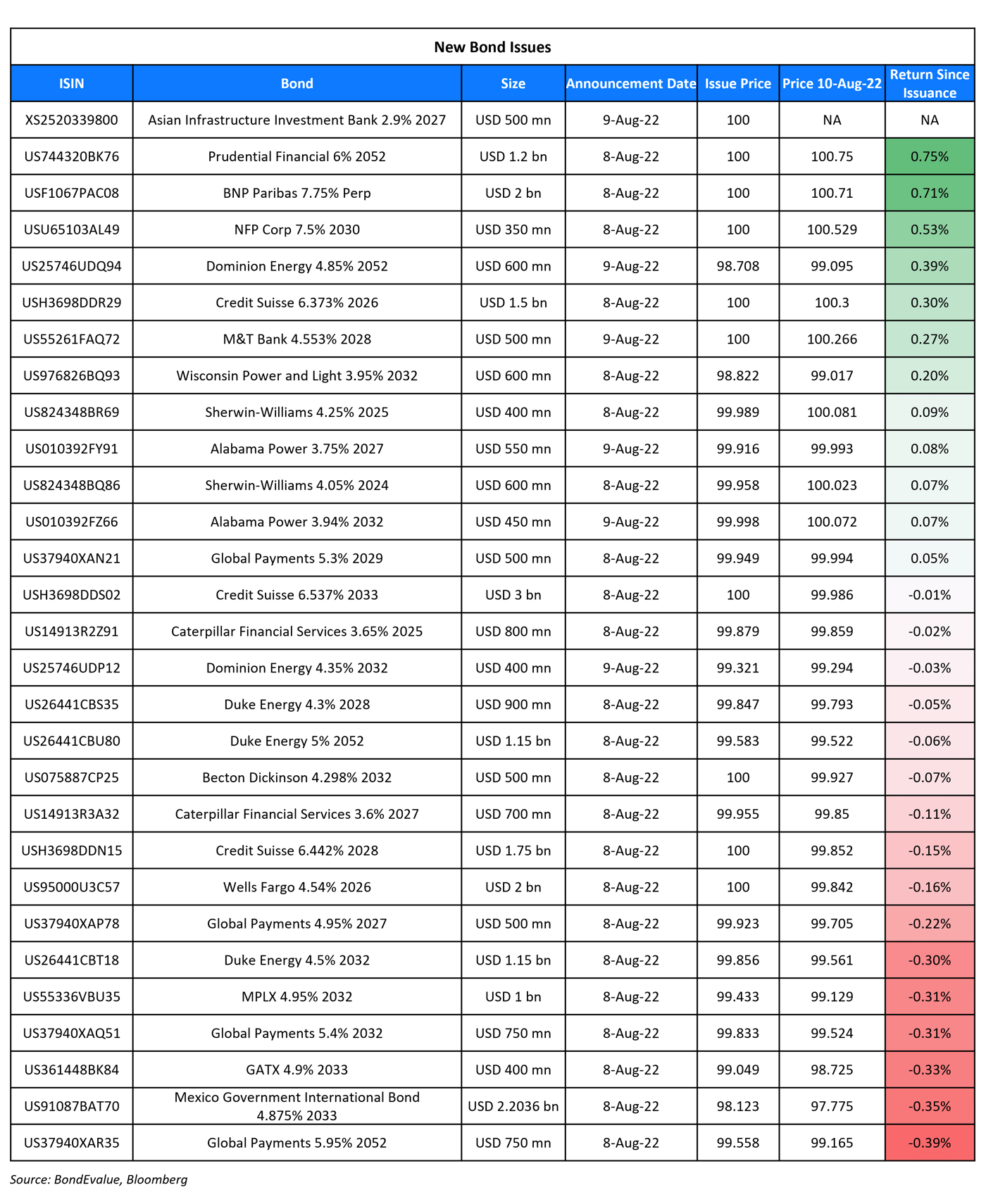 Wells Fargo raised $2bn via a 4NC3 Sustainability fixed-to-floating bond at a yield of 4.54%, 25bp inside the initial guidance of T+165bp area. The senior unsecured bonds have expected ratings of A1/BBB+. Proceeds will be used for general corporate purposes. The new bonds are priced at a new issue premium of 31bp vs. its existing 4.1% 2026s that currently yield 4.23%.

Credit Suisse raised $6.25bn via a three-tranche deal. It raised

The bonds have expected ratings of Baa2/BBB. Proceeds will be used for general corporate purposes.

A Make Whole Call (MWC) is a type of call option on a bond that gives the issuer the right to redeem a bond before its maturity date by compensating (making whole) bondholders for future coupon payments. MWC provisions were introduced in the 1990s and are rarely exercised by issuers. If exercised, the issuer has to pay a lump sum amount to the bondholders that represent the net present value of future foregone coupon payments, typically stated as a formula in the bond prospectus.

The Bank of England would press on with plans to gradually sell its vast stock of British government bonds even if an economic slowdown eventually forces it to cut interest rates. Ramsden, in charge of the BoE’s roughly 1 trillion-pound balance sheet, told Reuters it was “more likely than not” that borrowing costs would need to rise again after the BoE raised Bank Rate by 50 basis points to 1.75% last week.

Michael Feroli of JPMorgan and Derek Tang of LH Meyer

Friday’s blowout jobs report spurred economists at JPMorgan Chase & Co., Evercore ISI and LH Meyer to say bigger US interest-rate increases are now in store this year, with Citigroup Inc. seeing a risk of a 1 percentage-point hike in September.

Michael Feroli of JPMorgan and Derek Tang of LH Meyer now expect a 75 basis-point increase at the Federal Reserve’s Sept. 20-21 meeting, compared with 50 basis-point calls before. And Evercore analysts led by Krishna Guha see an extra quarter percentage point this year, taking the upper bound of the target rate to 3.75% by December.

“The world is not likely to return anytime soon to the low inflation levels and interest rates that we have enjoyed in recent decades,” Lee said in a televised message Monday on the eve of the country’s National Day. “I know the cost of living is at the top of everyone’s minds. The government has carried out multiple support packages, targeting assistance to those who need it most. More such measures will be “rolled out in the coming months” 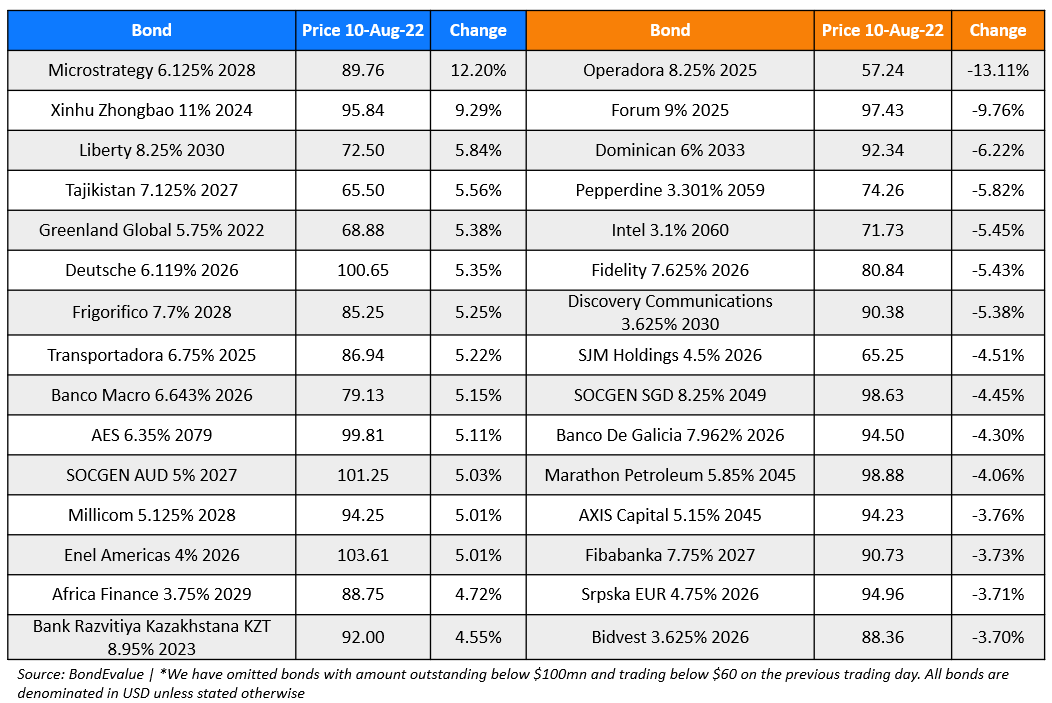