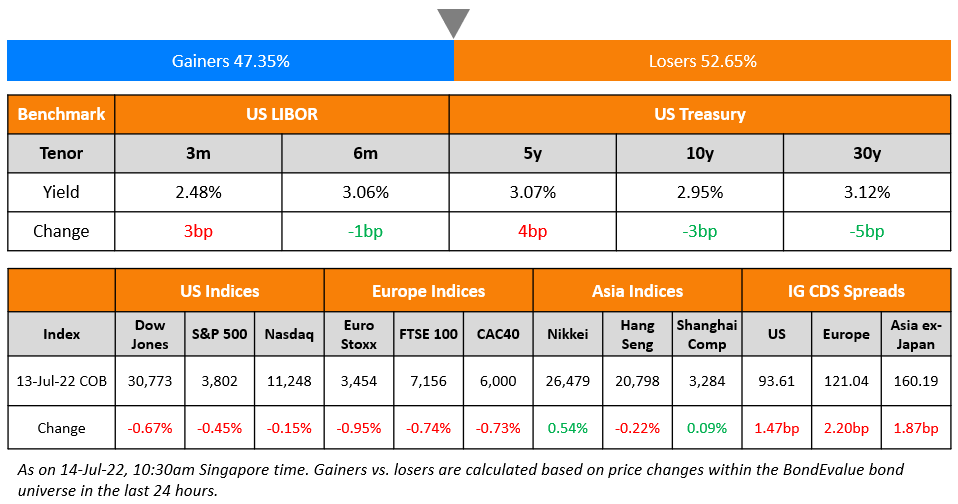 US equity markets trended lower on Wednesday with the S&P and Nasdaq down 0.5% and 0.2% respectively. Sectoral losses were led by Industrials, down 1.2% followed by Communication Services  that fell 1.1%. US 10Y Treasury yields were 3bp lower at 2.95% while 2Y yields jumped to 3.2%, with the 2s10s curve inverting to -24bp after the sharp rise in US CPI. European markets were lower with the DAX, CAC and FTSE down 1.2%, 0.7% each respectively. Brazil’s Bovespa fell 0.4%. In the Middle East, UAE’s ADX and Saudi TASI lost 0.8% and 1.1% respectively. Asian markets have opened broadly higher – Shanghai and HSI were up 0.3% each, the Nikkei was up 0.8% while STI was down 0.8%. US IG CDS spreads widened 1.5bp and US HY spreads were wider by 13bp. EU Main CDS spreads were 2.2bp wider and Crossover spreads were wider by 11.2bp. Asia ex-Japan IG CDS spreads widened 1.9bp.

US CPI came in at 9.1% for June, higher than the 8.6% print in May. This is its highest level in four decades. Surging prices for food, gas, cars and rent drove the CPI higher. The probability for a 100bp hike by the Fed in July has now risen to 80.9% as against 7.6%, a day before the inflation print. The probability was at 0% in the first week of July. Separately, the Bank of Canada increased its policy rate unexpectedly by 100bp to 2.5%, the largest hike in 24 years. 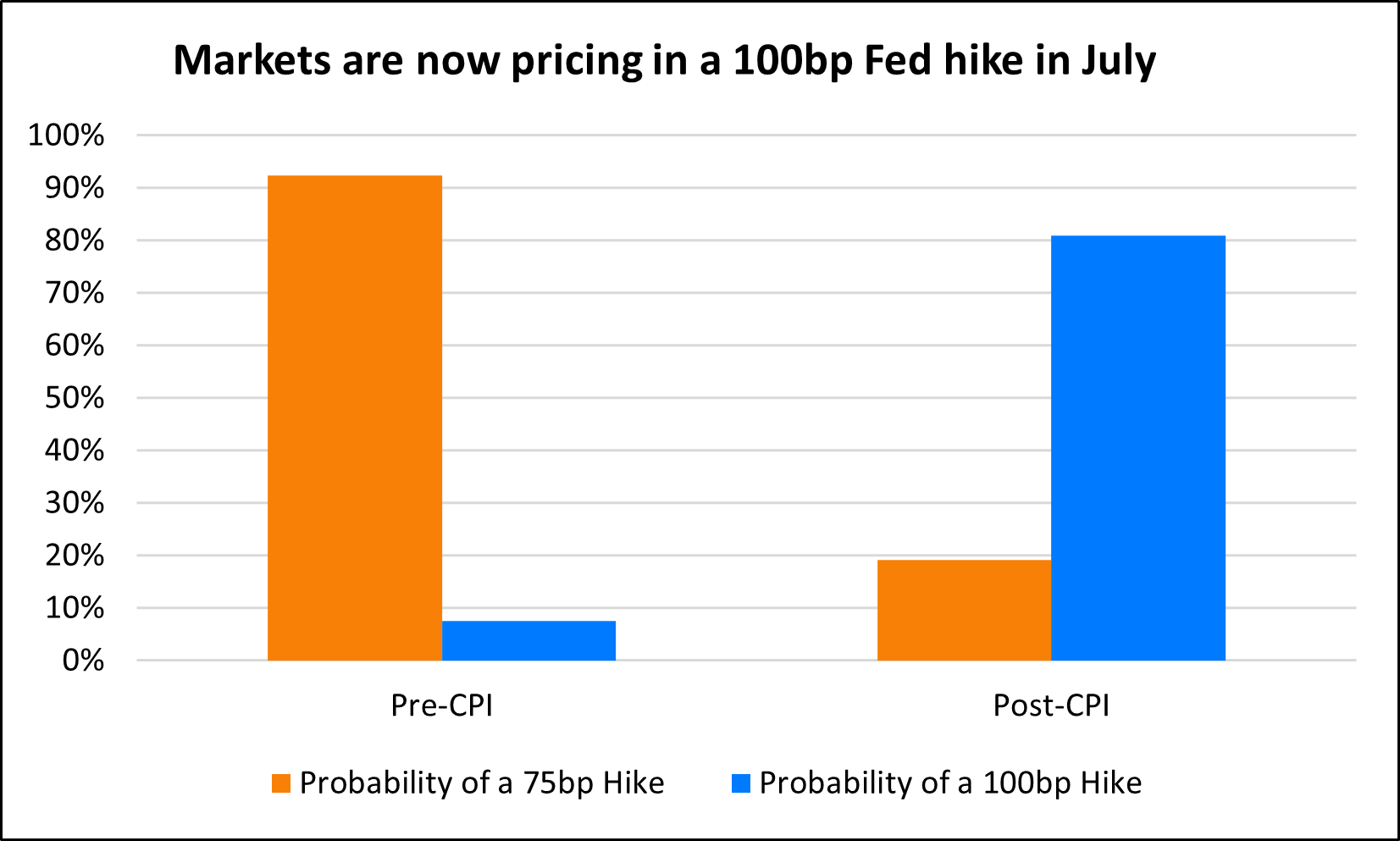 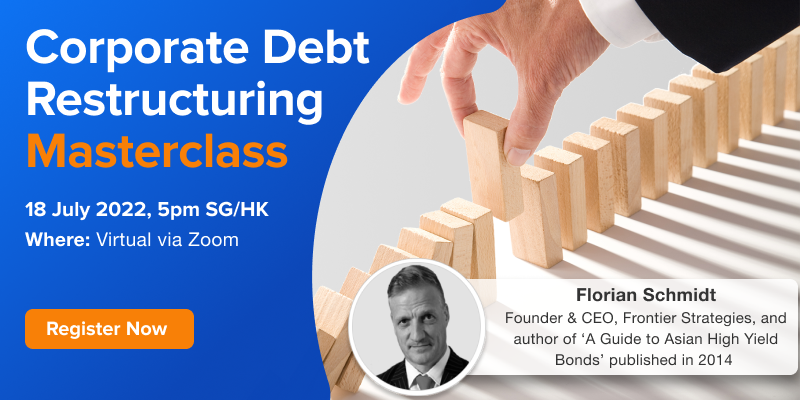 Fujian Zhanglong Group raised $500mn via a 2Y 11M green bond at a yield of 4.95%, 35bp inside initial guidance of 5.3% area. The bonds have expected ratings of BBB- (Fitch). The senior green note will be used to finance or refinance eligible projects in accordance with the company’s green finance framework.

Recovery bonds are bonds that are typically issued by state utilities trying to recapture losses from natural disasters, such as wildfires or storms. Special fees are levied on customers’ electric bills etc. (to recover losses) and these charges are then combined and sold as notes/ABS. Bloomberg highlights that recovery bonds have seen abundant interest from investors, especially ABS money managers. This is because these bonds offer longer tenors ranging from 10-30 years while typical ABS’s have tenors of just about 5 years. These bonds are also backed by state legislation that allows utilities to impose recovery charges. Analysts say that this makes them a safe haven as compared to other types of ABSs.

Utility company PG&E Wildfire Recovery Funding raised $3.9bn via a five-tranche recovery bond offering. Here, the fixed recovery charges will be collected from all customers except those participating in the CARE and FERA programs in PG&E’s service area. PG&E also raised $3.6bn in May via recovery bonds. The issuances are aimed at recouping costs caused by the wildfires that ravaged California in 2017.

“The June CPI report was a straight up disaster for the Fed. The deepening yield curve inversion is screaming recession, and the Fed has made clear it prioritizes restoring price stability over all else.”

On Fed’s Bostic Saying June CPI Concerning, ‘Everything in Play’

“The top-line number is a source of concern… Everything is in play… I am not wedded to any specific course of action. I’ll let the broad collected intelligence that we are gathering guide me in terms of what’s appropriate. If the top-line number is driven by one or two factors that have outsized weight I might think of it differently than if it is broad-based.”

“Central banks have been forced to play catch-up in the fight against inflation, ratcheting up interest rates more rapidly and possibly higher than previously expected. But those actions risk cooling economies to the point that they enter recession… There is an upside to down markets: Because of lower current equity valuations and higher interest rates, our model suggests higher expected long-term returns than our forecasts as of year-end”

On China’s Credit Market Moving Into Fresh Phase of Distress

“We’ve got a property sector that is almost dead and used to employ huge numbers of people and a lot of downstream industries. All of that is getting impacted by this property slowdown, and that’s why I think we’re still early in the game here.”

“There is a lack of new buyers in the China property high-yield space. Fund flow is really poor… Traditionally, distressed funds will step in at these levels, yet there are too many distressed names at this stage, and many distressed investors are still stuck with companies that defaulted earlier.”