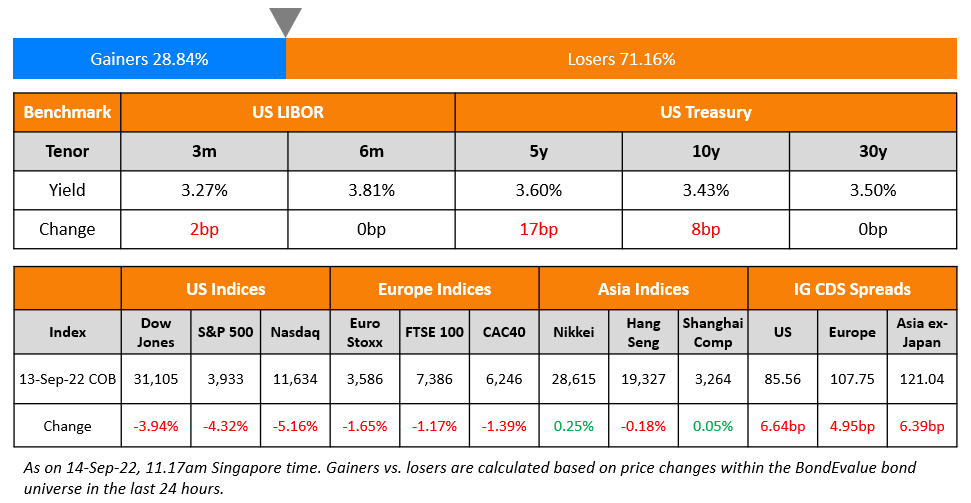 The US 2Y Treasury yield jumped 26bp to 3.79% with the 2s10s yield curve again inverting. US 10Y Treasury yields were 8bp higher at 3.43%. The jump on the short-end occurred after the US inflation data release, which came in higher than forecasts. CPI in August accelerated by 8.3% YoY vs. forecasts of 8.1%. Similarly, Core CPI also came in higher at 6.3% YoY vs. 6.1% expected. Prior to the CPI release, markets were pricing in a 91% probability of a 75bp hike at next week’s FOMC meeting (September 21) and there were no expectations of a move larger than that. However, post yesterday’s inflation data, the probability of a 100bp hike now stands at 38% as per CME data. Equity markets took a beating with the S&P and Nasdaq tanking 4.3% and 5.1% respectively – its biggest single day loss since June 2020. US IG CDS spreads widened 6.6bp and US HY spreads widened 9.6bp. 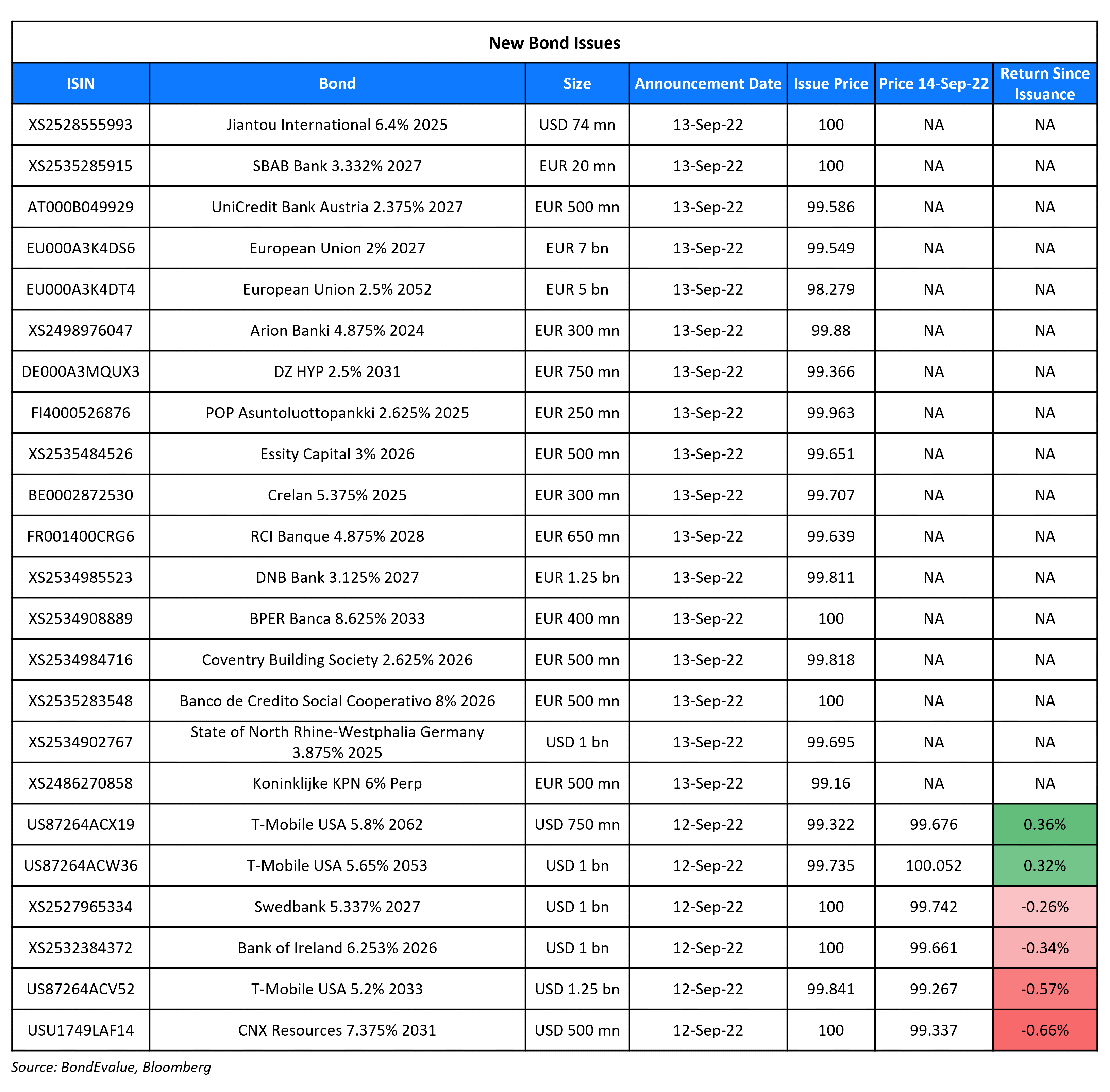 Consent solicitation is an offer by the issuer to change the terms of the security agreement. These are applicable for changes to bonds or shares issued and can range from distribution payment changes and covenant changes in bonds to changes in the board of directors with regard to equities.

“The Federal Open Market Committee, the Federal Reserve’s policy-setting committee, is likely to raise its short-term interest rate target by a full percentage point at its policy meeting next week, because of the emergence of upside inflation risks… With the latest data, we believe those risks are starting to materialize via higher measured inflation across a broad range of goods and services.”

On Moving Back into Bonds

“Bonds had been hit by a perfect storm of rising inflation and interest rates that had pushed yields higher, but that the outlook was shifting as recession risks mount…Markets are not totally pricing in recession risks, which are looming, in particular in Europe…We believe that when the recession risks start to materialise, central banks will act to make sure long term rates are not drifting up too much.”

“U.S. Treasuries do not have much more downside…Long-rates are near a peak and that is one reason why we have turned more positive.”

“It has definitely been a tough year across fixed income…it’s best to wait until the Fed gets to 4% and then add shorter maturity exposure in high-quality credit and floating-rate notes.”

Gargi Chaudhuri, head of iShares investment strategy for the Americas at BlackRock

”The recent surge in Treasury yields has created lucrative trading opportunities…[my] highest conviction trades through the end of the year are to be in front-end, high-quality credit.”

“[People] shouldn’t expect the lofty equity average returns that persisted before the pandemic. …previously boring choices like certificate of deposits are again worth a look and… [it is worth] thinking about adding more short-term bonds — and holding them to maturity… People over past years had become overly anchored in equities given the high returns, but now in this era of higher rates — for longer — they are going to be less satisfied.”

On Wall Street Debating the Fed’s Next Rate Move

“Eleven Fed officials have made it very clear that they will not slow the pace of rate hikes until they see convincing evidence that core inflation pressure is easing on a sequential basis. These data mean that the chance of a 50bp hike next week has gone…But the 20% chance of a 100bp hike now priced-in looks over the top.”

“Oddly enough, I think the market might rally…They want to see the Fed take things seriously on the inflation front, and the sooner we get to the end of these hikes the better…The knee-jerk reaction is probably lower in all risk assets, and there’s the obvious funding impact on anyone who is using leverage, but for the medium term health of the market I think 100 might make sense.” 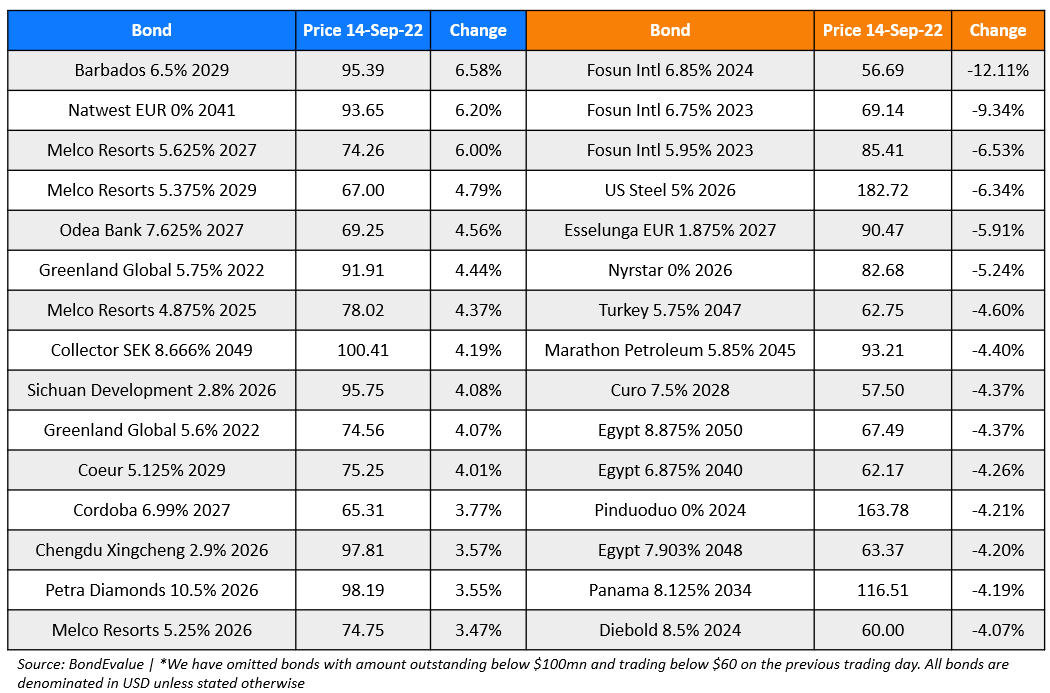