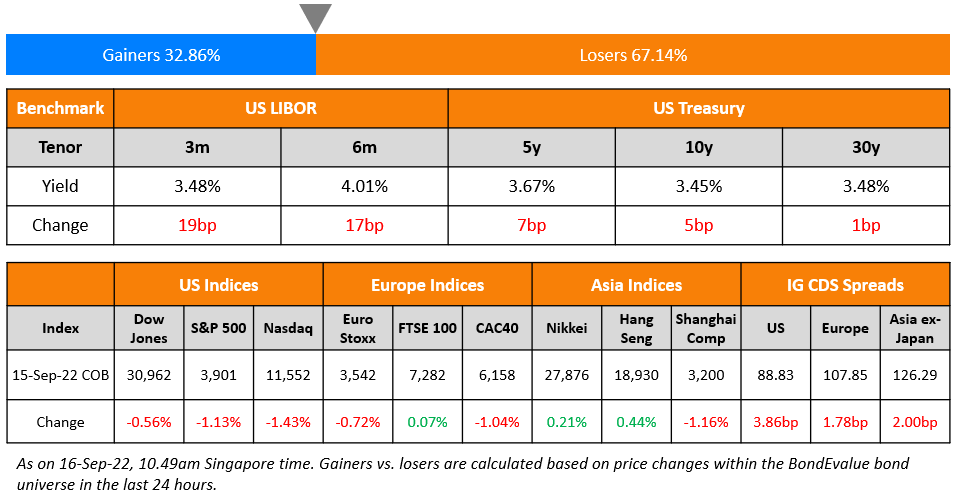 US 10Y Treasury yields were 5bp higher at 3.45%. The 5Y benchmark yield rose 7bp to 3.67%. The curve bear flattened with the 5s30s yield curve inverting by the most since 2000 to -20bp. With the spike in short-term rates, US 3m LIBOR was up 19bp. US equity markets moved lower on Thursday with S&P and Nasdaq down 1.1% and 1.4% respectively, suggesting a likely dead cat bounce on Wednesday. US IG CDS spreads widened by 3.9bp and US HY spreads were 26.3bp wider. US retail sales rose by 0.3% in August against estimates ranging from a -0.5% decline to a 0.5% increase. Analysts note that the print reflected a moderation in demand for goods, especially discretionary goods. July’s data was revised lower to -0.4%. Weekly jobless claims also fell by 5k to 213k. 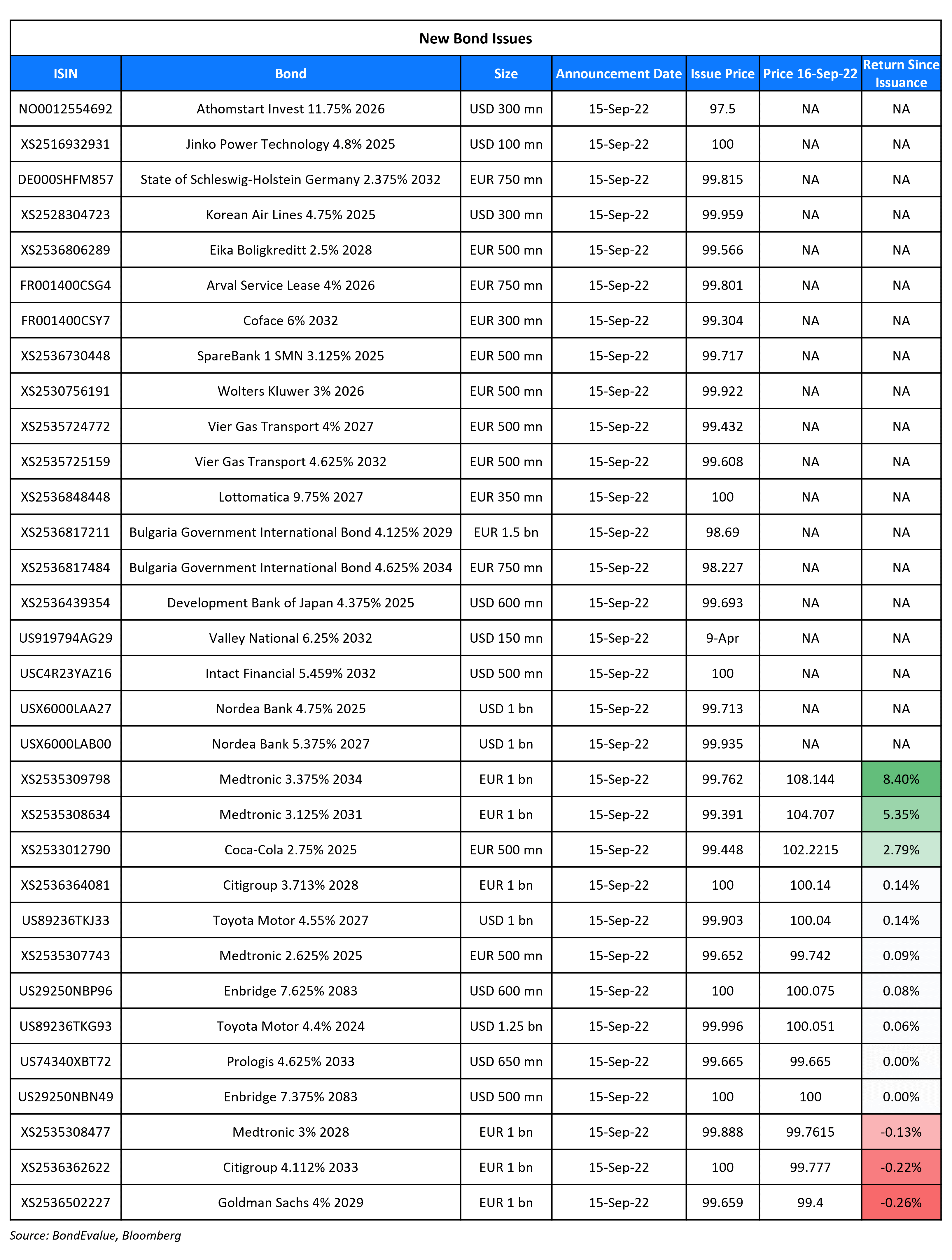 Citigroup raised €2bn via a two-tranche deal. It raised

The senior unsecured bonds have expected ratings of A3/BBB+/A.

Goldman Sachs raised €1bn via a 7Y bond at a yield of 4.057%, 20bp inside initial guidance of MS+180bp area. The senior unsecured bonds have expected ratings of A2/BBB+/A, and received orders over €2.1bn, 2.1x issue size. Proceeds will be used for general corporate purposes.

Korean Air raised $300mn via a 3Y bond at a yield of 4.765%, 40bp inside initial guidance of T+130bp area. The senior unsecured bonds have expected ratings of Aa2/AA/AA-, and received orders over $1bn, 3.3x issue size. The bonds are issued by Korean Air Lines and guaranteed by Korea Development Bank.

Dead cat bounce is a market jargon used to denote a short-lived bounce back in the price of an asset class (stocks, bonds etc.) or an index after a severe prolonged longer-run drop. Reasons for such a move could include prices reaching certain support levels as some traders clear their short positions.

On Expecting Fed to Raise Rates Above 4.3% to Curb Inflation – Former US Treasury Secy, Larry Summers

“My guess is that if they want to securely control inflation, they’re going have to raise rates further than that. But that’s not a decision they need to make right now… It was very clear that doing 75 basis points, which is what the Fed has now said it’s going to do next week, is better than doing only 50 basis points. And I’m sure they’re going have to continue to raise interest rates.

“Six months ago we were really concerned about a slowing recovery and very high prices of some commodities, and now I think we are much more concerned about a generalized stagflation, which brings back really bad memories of the mid-1970s and the lost decades.”

On World Bank seeing rising risk of global recession in 2023

“Global growth is slowing sharply, with further slowing likely as more countries fall into recession… moderate hit to the global economy over the next year could tip it into recession”. 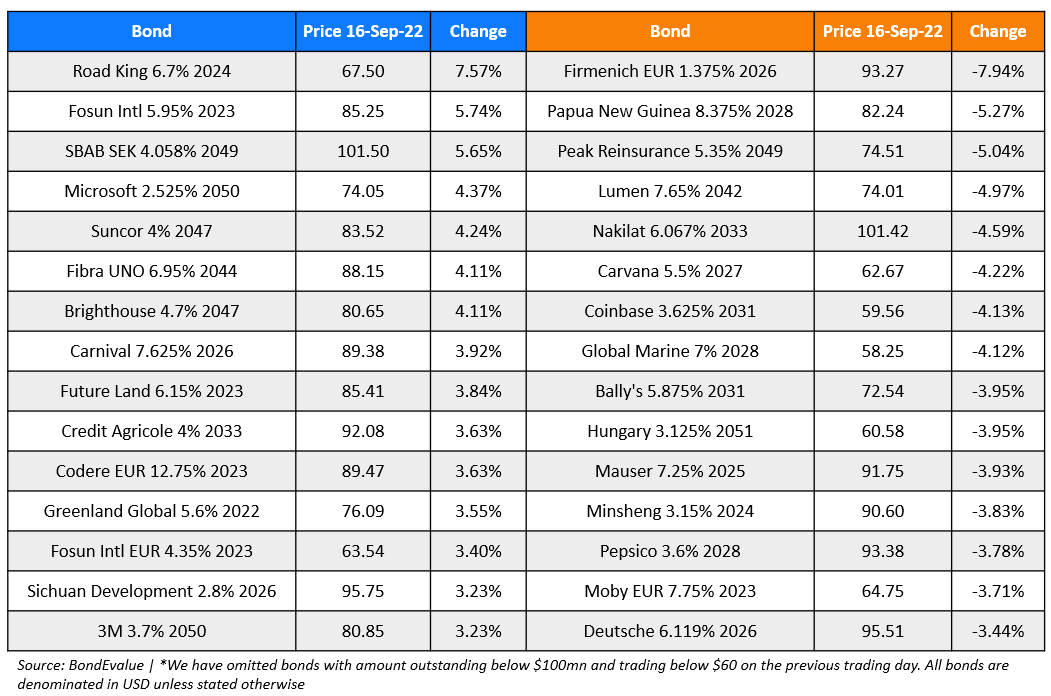