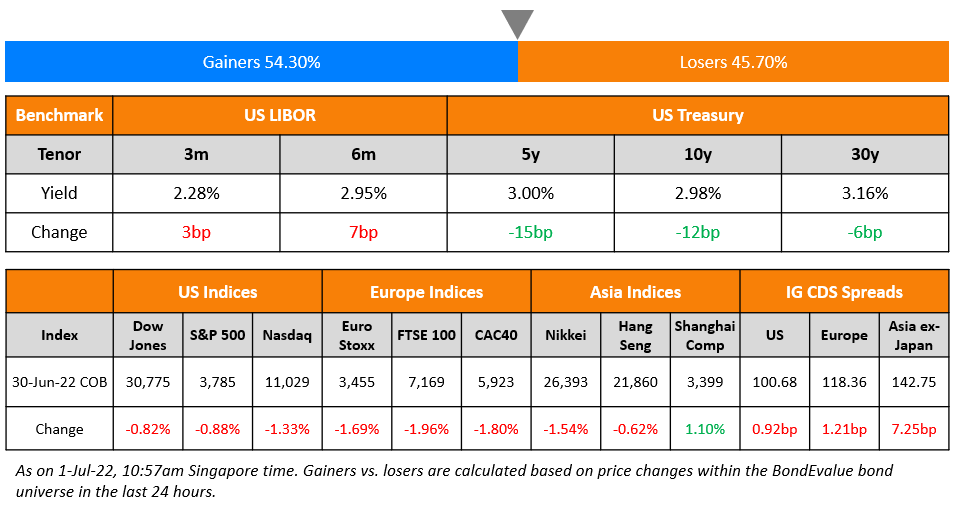 US equity markets ended weak on Thursday with the S&P and Nasdaq down 0.9% and 1.3% respectively. Sectoral losses were led by Energy down 2% and Communication Services down 1.6%. US 10Y Treasury yields were 12bp lower at 2.98% on weak economic data, going below the 3% mark for the first time in over a month. European markets ended lower too with the DAX, CAC and FTSE down 1.7%, 1.8% and 2%. Brazil’s Bovespa fell 1%. In the Middle East, UAE’s ADX fell 0.4% while Saudi TASI gained 0.5%. Following the West, Asian markets have opened lower – Shanghai, HSI and Nikkei were down 0.2%, 0.6% and 1.5% respectively while STI was flat. US IG CDS spreads widened 0.9bp and US HY spreads were wider by 7.6bp. EU Main CDS spreads were 1.2bp wider and Crossover spreads were tighter by 1.8bp. Asia ex-Japan IG CDS spreads widened 7.2bp.

The core PCE, the Fed’s preferred inflation gauge rose 4.7% in May, 0.2% lower than April. China’s manufacturing PMI rose to 50.2 in June against 49.6 in May as economic activity picked up gradually following easing of Covid-related restrictions.

Barclays raised S$450mn via a PerpNC5.5 AT1 bond at a yield of 8.3%, 30bp inside initial guidance of 8.6% area. The bonds have expected ratings of Ba2/BBB (Moody’s/Fitch), and received orders over S$1.3bn, 2.9x issue size. Private banks showed massive interest taking 75% of the deal, with asset and fund managers taking 23%, and banks/corporates 2%. The perps will be callable on September 15, 2027 with the first reset on December 15, 2027 to the prevailing SORA plus the initial credit spread of 564.1bp. If not called, the coupon will reset then and every five years thereafter. The subordinated notes will convert into shares on a capital adequacy trigger event which will occur if the bank’s CET1 ratio is less than 7%. Proceeds will be used for general corporate purposes, and to strengthen the borrower’s capital base.

This is the first AT1 transaction in the Singapore market from a foreign bank since August 2019, IFR notes. Additionally, this was one of the highest coupons paid on an AT1 issue in SGD and from an IG-rated issuer as per IFR. The previous highest coupon paid on an SGD AT1 was 6.125% by Societe Generale in 2019.

Special sovereign bonds are bonds issued by China where cash is raised for a certain policy purposes or to help solve a particular problem. These bonds are not part of China’s official budget and thus not included in deficit calculations, Bloomberg notes. The State Council, China’s cabinet, can propose the sale of such bonds, which then requires approval only by a standing committee of the National People’s Congress (NPC). Thus, the issuance of special sovereign bonds are more flexible than regular bonds that have to be planned and approved by the NPC. China is planning to issue these special bonds this year with its reference being the last batch of issuance in 2020 during the pandemic, where it raised RMB 1tn ($149bn).

“From my Austrian point of view, I would have preferred earlier moves on interest rates but I am only one of 25 at the European Central Bank”

On a U.S. recession “more likely than not” and the same for Europe – PIMCO

” A U.S. recession over the next 12 months is “probably more likely than not”, A recession is not the only important thing. You’re clearly going to see a significant growth slowdown, The probability of a recession is similar in Europe, possibly a bit higher.”

“Germany does not have the funds to deliver a third package of relief measures for cash-strapped households in 2022. There will be a further relief package in 2023”

On Bond Traders Who Faced Irrelevance Make a Comeback in Japan

“The industry may have become short of human resources… For our market makers, it is good”

“We’ve continued to focus on our JGB franchise for several years to capture this kind of market opportunity and already have a solid team in place to meet client demand. 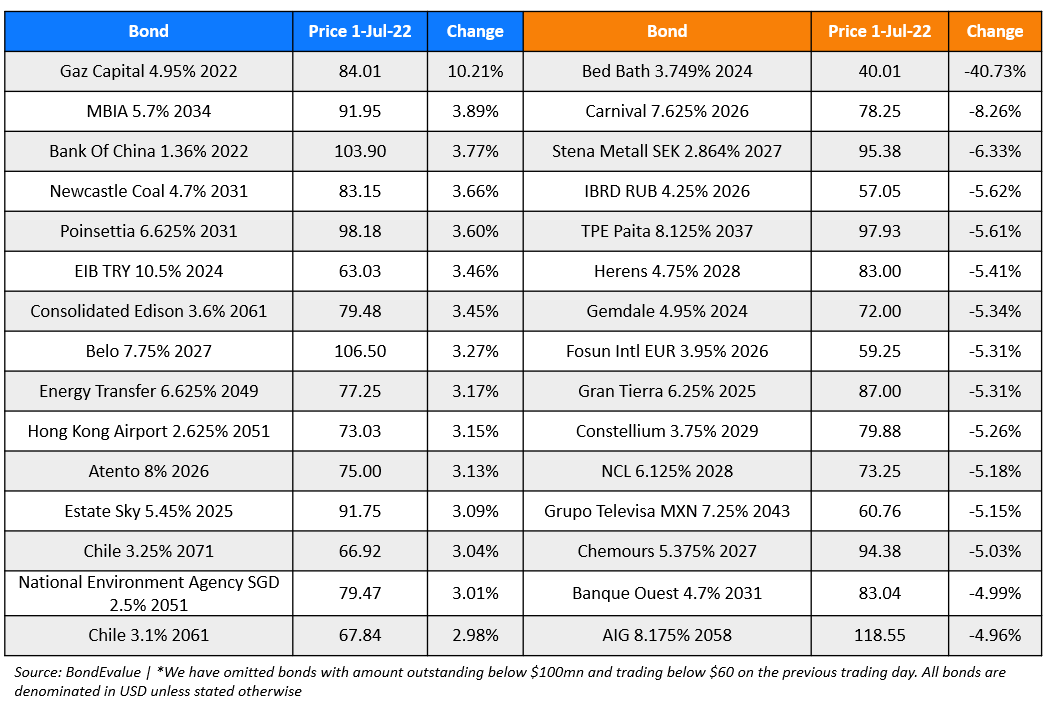