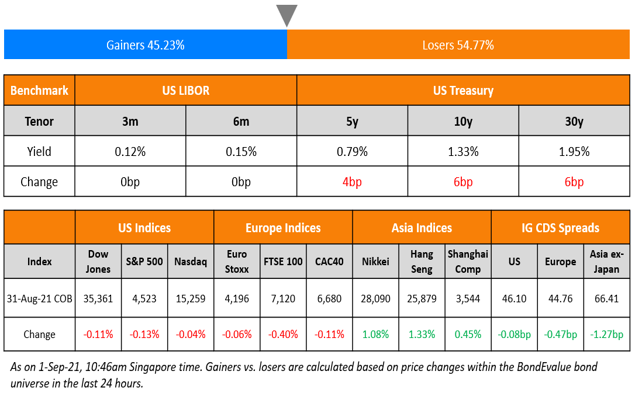 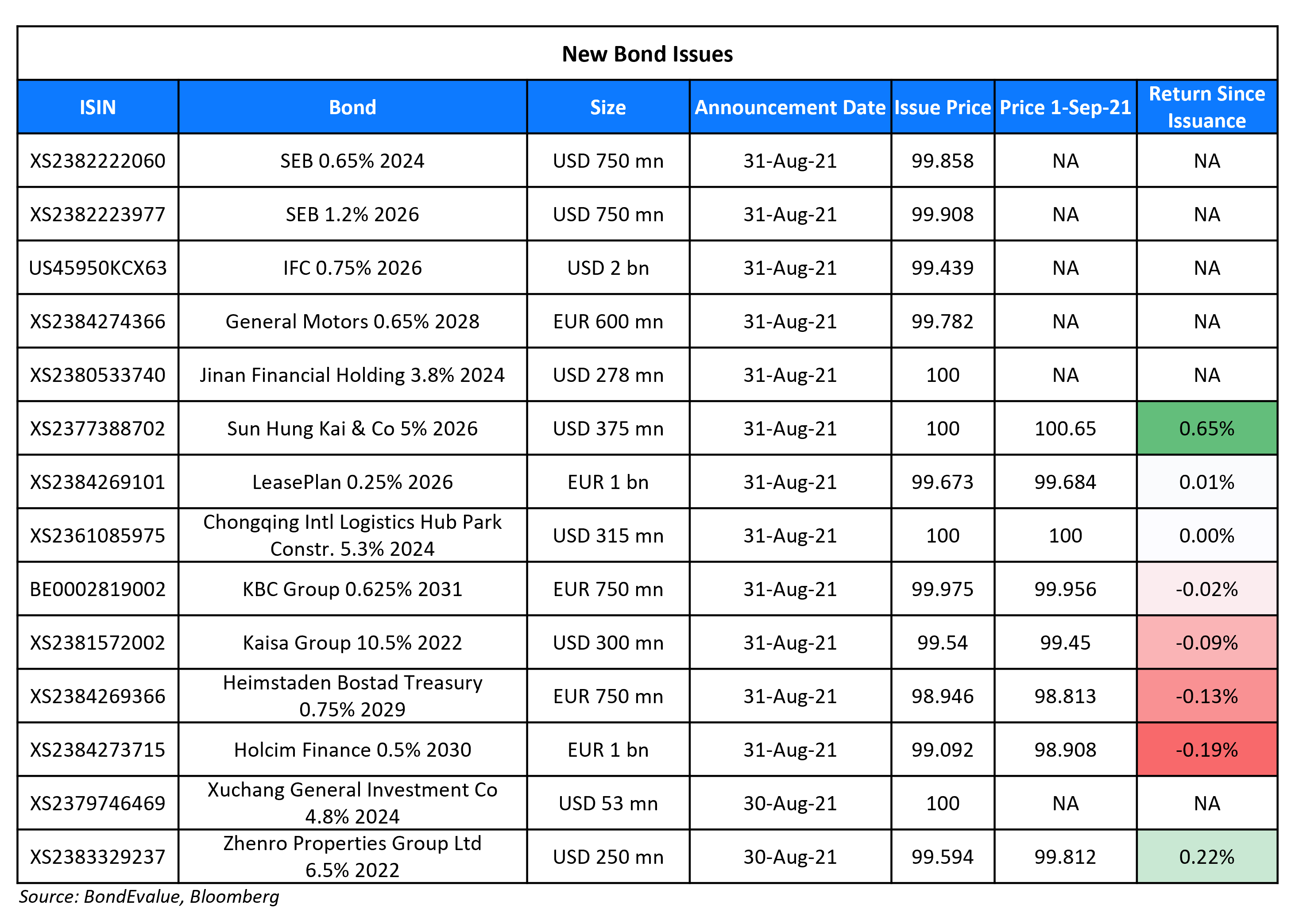 Kaisa Group raised $300mn via a 364-day sustainable bond at a yield of 11%, unchanged from initial guidance. The unrated bonds received strong orders of over $2.4bn, 8x issue size. Proceeds will be used for debt refinancing and general corporate purposes. Asian and European investors took 90% and 10% respectively. Asset/Fund managers took 74%, private banks 18%, banks and financial institutions 5% and corporates 3%. The new sustainable bonds priced ~30bp inside of its older 11.95% bonds due in October 2022, which are currently yielding 11.3%.

Sun Hung Kai raised $375mn via a 5Y bond at a yield of 5%, 35bp inside the initial guidance of 5.35% area. The unrated bonds received orders over $2.3bn, 6.1x issue size. Proceeds will be used for general corporate purposes and debt refinancing. Sung Hung Kai & Co BVI will be the issuer and Sun Hung Kai & Co will be the guarantor.

Chongqing International Logistics Hub Park Construction raised $155mn via a tap of its $160mn 5.3% 2024s at a yield of 5.3%. The bonds are rated BBB– by Fitch. Proceeds will be used for debt refinancing. The original notes were priced on August 13 at par to yield 5.3%, inside initial price guidance of 5.75% area.

Re-designation occurs when an issuer changes the pool of voters after votes have been cast and counted. Re-designation is sometimes used to finalise restructurings when a deal is hindered by a few small series of bonds. Re-designation was a strategy used by Buenos Aires to leave portions of two bonds out of the restructuring for almost all its $7.1bn of defaulted debt so that it could garner sufficient votes from bondholders.

“I would expect a decision that should not be incompatible” with terminating the pandemic bond buying program (PEPP) next March. “That would imply a reduction in the purchase pace.” “Both programs have been conceived under completely different conditions, and therefore the proportionality assessment that has been made at the start of these two programs has also been completely different,” Knot said. “Some of the flexibility that characterized PEPP would go against some of the safeguards that have been built into the APP.” “PEPP has a clearly delineated objective — repairing the damage that the coronavirus has inflicted on the inflation outlook.” “The stars are much better aligned than they have been for a long time for the return of inflation back to 2%.” “I can understand that next week we may want to maintain some optionality, also to see how the delta variant will play out,” he said.

On Treasury yields falling slightly as investors await key jobs report – Tom Essaye of the Sevens Report
“The 10-year yield continues to build upside momentum, and Powell’s dovish tone on Friday won’t derail that momentum. However, the 10-year yield needs to break through resistance at 1.36% and then at 1.41% before it can mount a test of the April downtrend.”
On Chile pivoting to aggressive tightening after ‘drastic’ rate hike
According to a statement by Chile’s central bank

“An accumulation of macroeconomic imbalances that, among other consequences, could lead to a more persistent increase in inflation.” “The board decided to intensify the withdrawal of monetary stimulus.”

“If the factors that drove this rate hike persist, the central bank will very probably maintain this pace of interest rate increases.” “If a fourth round of early pension withdrawals happens, we could even see a hike of 100 basis points.”

“This hike was drastic in order to avoid the unanchoring of inflation expectations, which are starting to get out of hand, and due to the effect of excessive liquidity.” “I don’t think it’s likely that this pace is maintained.”

“The 75 basis points would only be the start of a much more aggressive withdrawal of monetary stimulus than we were expecting,” he said. 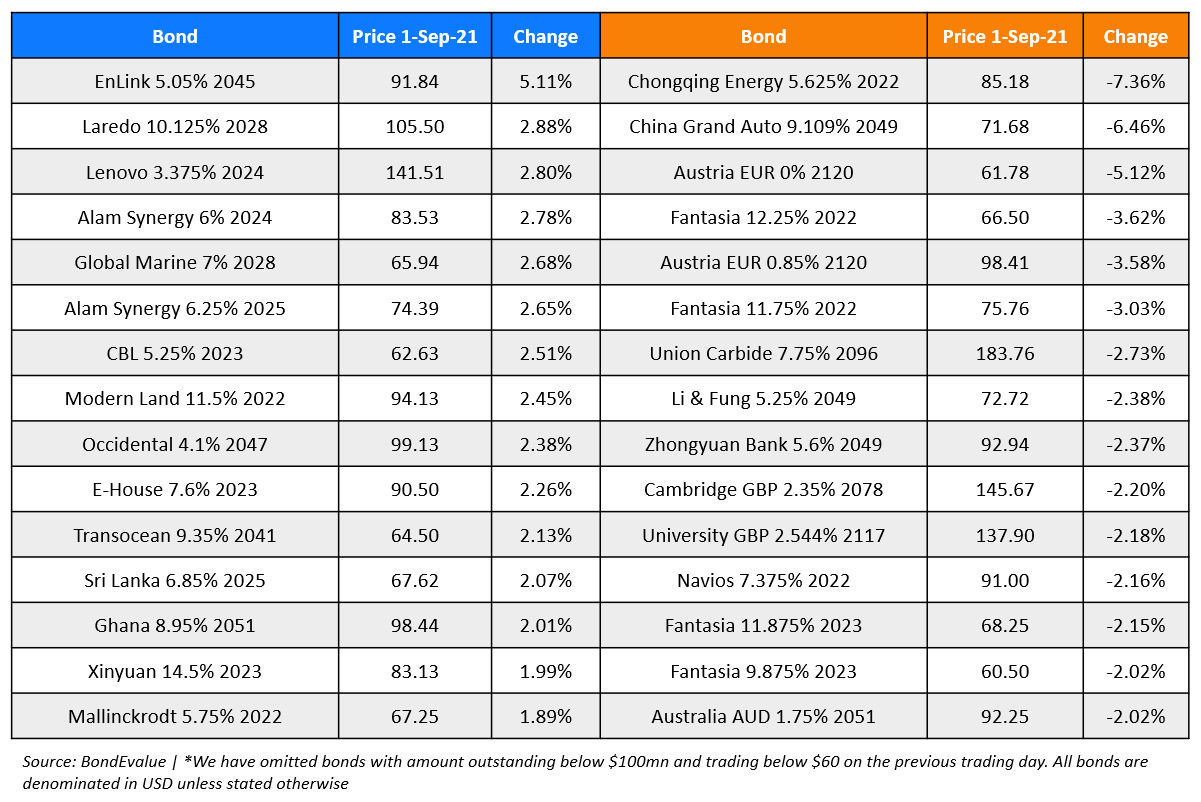