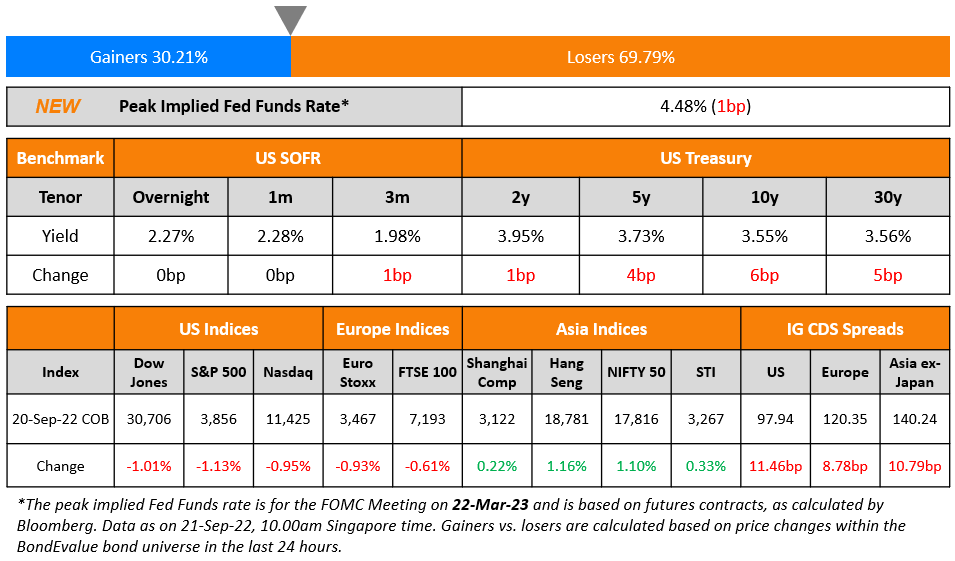 US 10Y Treasury yields rose 6bp to 3.55% while the 2Y was up 1bp to 3.95%. The peak Fed Funds Rate currently stands at 4.48% for the FOMC’s March 2023 meeting. US credit markets saw a sharp widening with IG CDS spreads higher by 11.5bp and US HY spreads higher by 14.6bp. Negative sentiment continues to weigh on risk assets ahead of the FOMC meeting later today. Markets are now pricing in an 82% probability of a 75bp hike and an 18% probability of a 100bp hike later today. Download the BondEvalue Mobile App to receive a push notification on the FOMC decision in real-time.

Expectations of earnings downgrades have also risen – BlackRock has called for a “substantial reduction” in earnings for 2023. US equity markets dropped on Tuesday with the S&P and Nasdaq falling 1.1% and 1% respectively. European equity markets ended lower too, down ~0.6-1%, and the credit markets saw EU Main CDS spreads rise by 8.8bp and Crossover spreads move 44bp higher. Sweden’s central bank, the Riksbank hiked its benchmark interest rates by 100bp, higher than expected, to 1.75%, its biggest hike since 1992. This comes after inflation rose 9% to a 30Y high in August.

Asia ex-Japan CDS spreads widened 10.8bp, echoing the global credit weakness. Asian equity markets have opened broadly negative today, down ~0.5%. The Asian Development Bank (ADB) cut its 2022 growth forecast for developing Asia due to pandemic restrictions in China, the Russia-Ukraine war and higher inflation. The region’s growth forecast was slashed to 4.3% from April’s 5.2%; this compares with 7% growth in 2021. ADB reduced Singapore growth projections to 3.7% from 4.2% in April while China’s growth forecast was cut a greater extent to 3.3% from 5%. 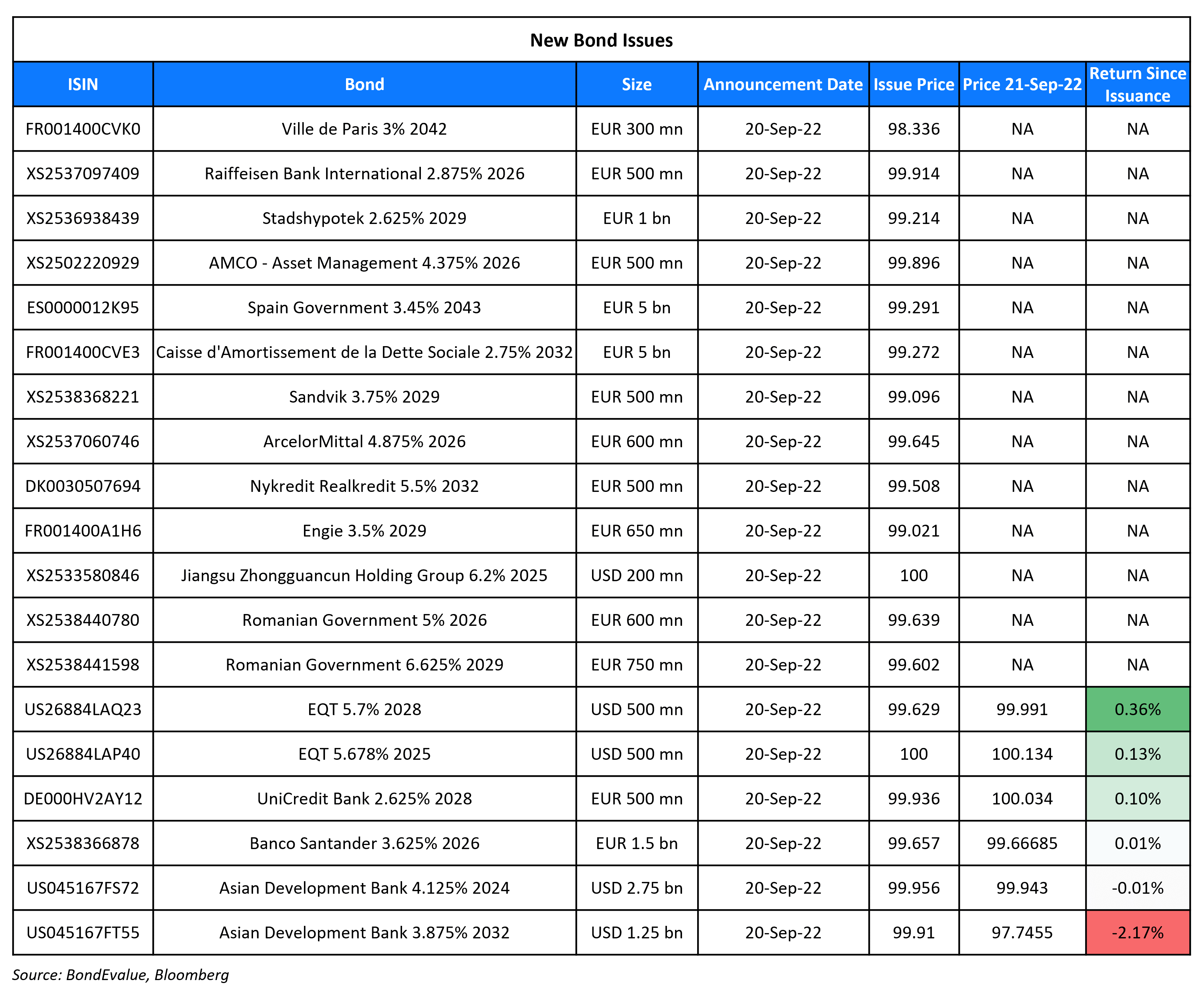 Jiangsu Liyang High-tech Zone Holding raised $200mn via a 3Y bond at a yield of 6.2%, 20bp inside initial guidance of 6.4% area. The bonds are guaranteed by Jiangsu Liyang. Proceeds will be used to repay offshore debt, particularly for its $300mn 6.5% 2022s due next month.

Amortization of debt refers to paying off debts via scheduled, pre-determined installments that include principal and interest over time. While the principal and interest amounts due on the amount borrowed will vary every payment date, the overall payment amount will be fixed each payment period. Large sized loans are amortized in order to make it easier to pay back the entire loan over an extended period of time.

“Without a doubt fixed income will be back with a bang”

“Some parts of the fixed income environment are attractive again, and can provide diversification for portfolios at this point, which wasn’t the case a few months ago”

“The 60/40 portfolio is definitely not dead, in fact, after the repricing that we’ve seen this year across fixed income markets, we would argue that it’s very much alive”

“If there were evidence that high inflation risked de-anchoring inflation expectations, then the policy rate that is compatible with our target would lie in restrictive territory”

“Perhaps some out there believe the worst of the drawdown is done. But if we still have more surprises — pick a reason: inflation, geopolitical issues, et cetera  — then there’s another leg lower to go.” 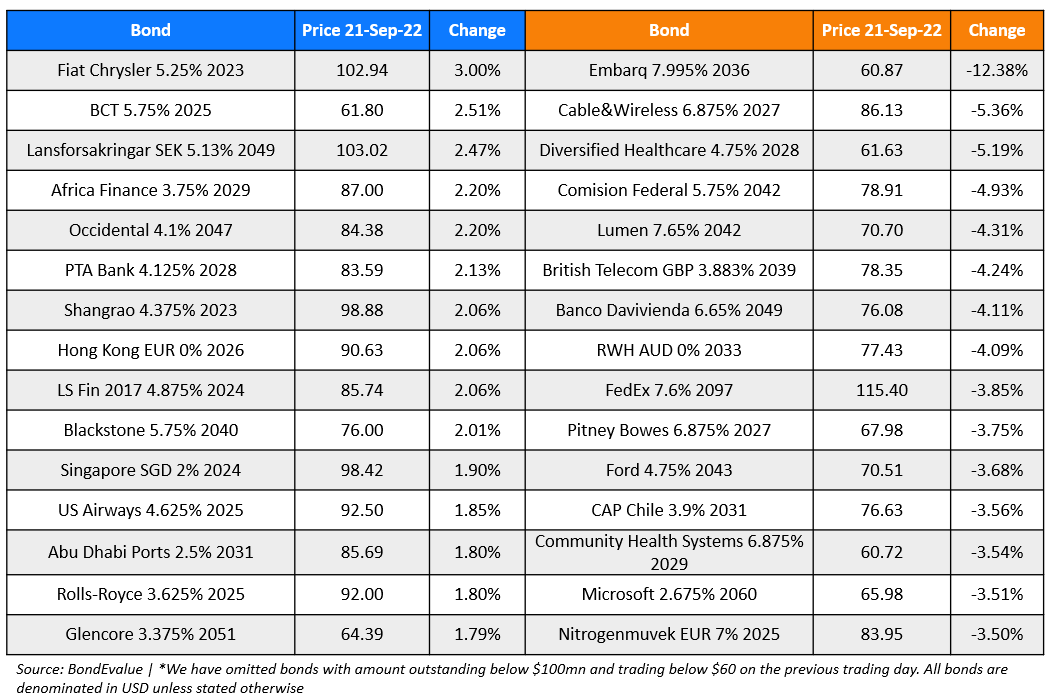