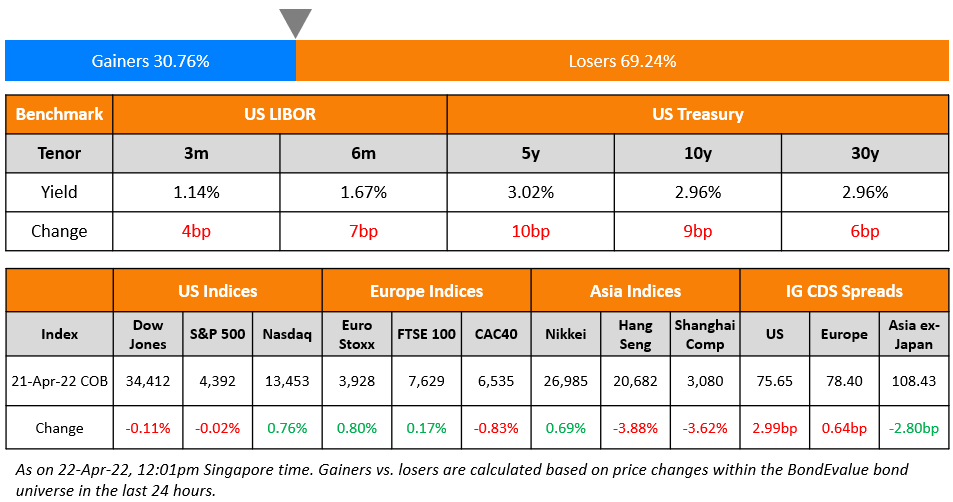 The S&P and Nasdaq ended sharply lower, down 1.5% and 2.1% respectively with all sectors in the red, led by Energy, down over 3.1%. US 10Y Treasury yields shot up 9bp to 2.96%, led by the front-end of the curve where the the 2Y yield jumped 15bp after Powell’s hawkish comments. European markets closed higher with the DAX and CAC up 1% and 1.4% while FTSE was flat. Brazil’s Bovespa was closed. In the Middle East, UAE’s ADX was up 1.2% and Saudi TASI was down 1%. Asian markets have opened with a negative bias – Shanghai, HSI and Nikkei were down 0.1%, 0.6% and 1.8% while STI was flat. US IG and HY CDS spreads widened 3bp and 14.1bp respectively. EU Main spreads were 0.6bp wider and Crossover spreads were 4.3bp wider. Asia ex-Japan CDS spreads were 2.8bp tighter.

Federal Reserve chairman Jerome Powell said that he saw merit in the argument for front-loading rate hikes and that a 50bp hike “will be on the table for the May meeting.” Bloomberg reports that traders have now priced in half-point rate hikes at each of the Federal Reserve’s next three meetings. 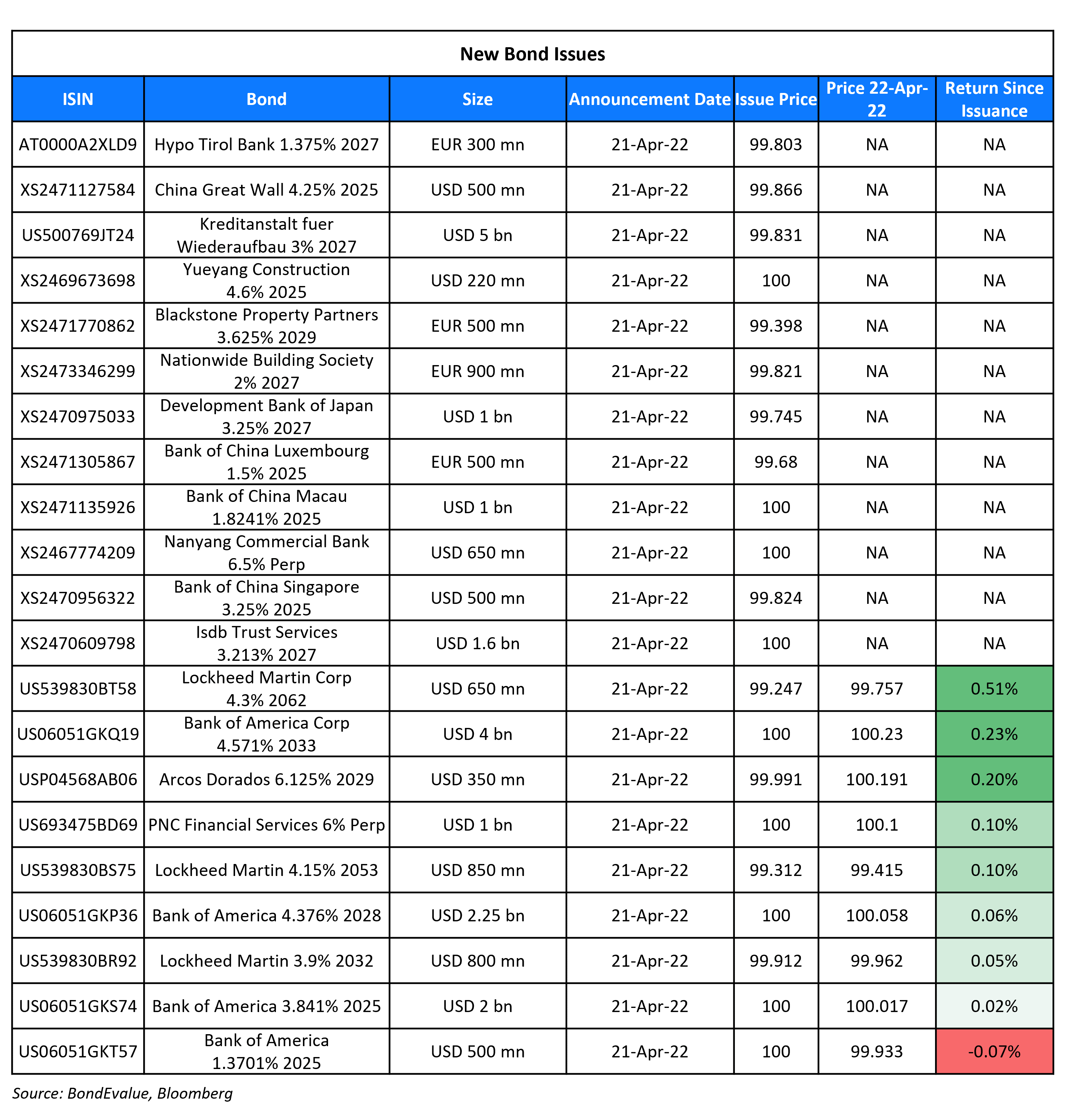 Bank of America (BofA) raised $8.75 via a four-trancher. It raised

The bonds are rated A2/A-. Proceeds will be used for general corporate purposes.

BOC raised ~$2.54mn equivalent via a multicurrency offering through three of its branches.

The bonds were rated A1/A/A. Proceeds from all three bonds will be used to fund and/or refinance eligible green projects under Bank of China’s sustainability series bonds management statement.

Nanyang Commercial Bank raised $650mn via a  AT1 bond at a yield of 6.5%, 20bp inside initial guidance of 6.7% area. The bonds are rated Ba2 and received orders over $2bn, x issue size. The proceeds from the subordinated bonds will be used to support Nanyang’s AT1 capital.

Yueyang Construction and Investment Group raised $200mn via a 3Y bond at a yield of 4.6%, 10bp inside initial guidance of 4.7% area. The bonds are unrated. Proceeds will be used for infrastructure construction related to a project in the Yueyang Lingang High-tech Industrial Development Zone, as well as for working capital.

Modern Monetary Theory (MMT) is a school of thought in economics that encourages countries, which control their own currency, to “print” money and use it towards government spending to boost the domestic economy in an environment where inflation is relatively low. Advocates of MMT argue that the accompanying rise in the level of national debt and deficit is not a problem as money can be “printed” to pay it off. While inflation is expected to be a natural fallout from this, theorists say that it can be controlled by monetary policy. Bloomberg reports that economists are now considering how MMT could benefit China’s monetary policy. 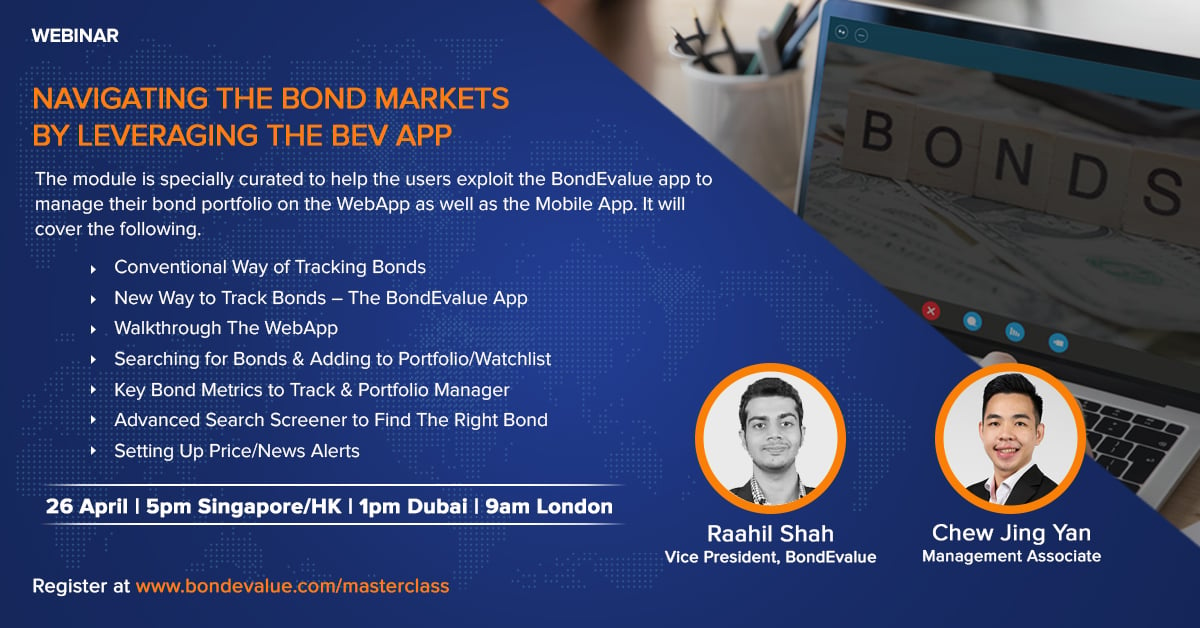 “The domestic inflation ratchet… has been my central concern”. “We want to avoid inflation getting out of control. And it may mean that interest rates go up a little bit… Monetary policy needs to keep inflation expectations anchored; by doing so now, less tightening will be required later, when demand may still be weak.”

“The notion of ‘Wandel durch Handel’, of bringing about change through trade, has shown its limitations… We need to rethink our relations with autocratic regimes and strengthen our ties with like-minded partners. This crisis will also spell the end of globalisation as we have known it and reshape global alliances… The war and its consequences – including the successive rounds of sanctions that the EU and the US have imposed on Russia – are exacerbating pressures on already strained global supply chains”

On Bargains Hidden in Indonesia’s $44 Billion of Distressed Debt

Seeing opportunities to buy non-performing loans and other loan portfolios directly from Indonesian banks, as well as to acquire or fund businesses that have recently come out of restructuring.

“We will see an increase in distressed assets in the coming months. In normal circumstances, that is the result of a crisis.”

Todd Schubert, head of fixed-income research at Bank of Singapore

“The 3% yield on the 10-year U.S. Treasury is an important psychological barrier, and should this be reached in the coming days it would only add to the already formidable challenges currently roiling the bond markets. Right now, rates are the overwhelming force dominating the fixed-income markets.

“Fifty-basis-point hikes in May and June are reasonable, while 50 in July will depend on the how the data plays out in the next few months” 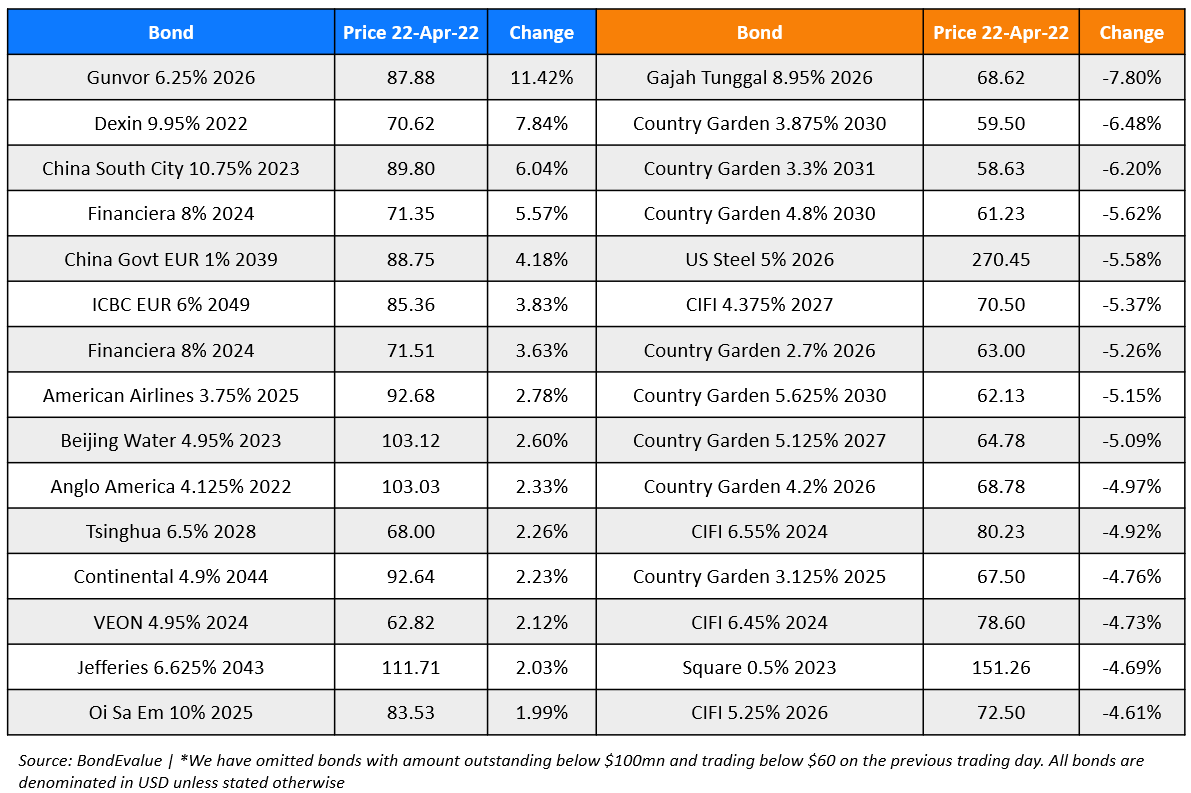