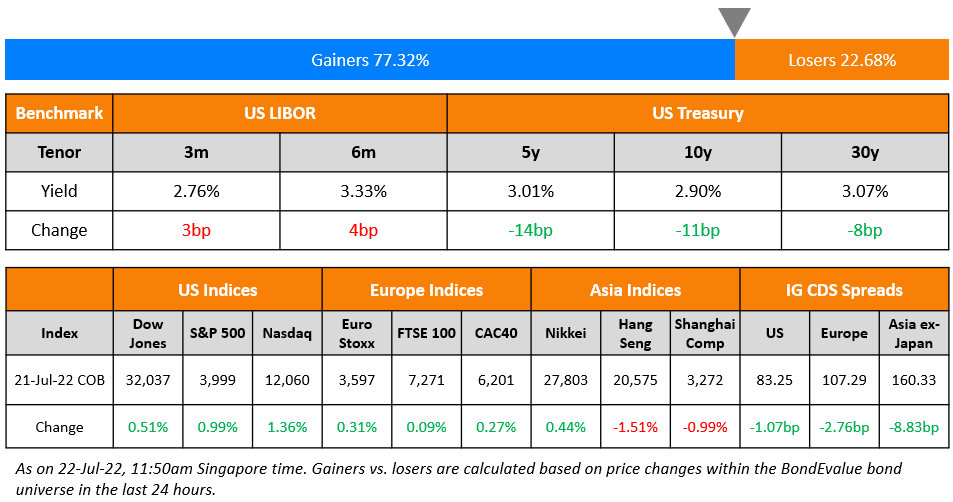 US equity markets kept its upward trend on Thursday with the S&P and Nasdaq up 1% and 1.4% respectively. Sectoral gains were led by Consumer Discretionary, up another 2.3%, and Health Care gained 1.5%. US 10Y Treasury yields were 11bp down at 2.90%. European markets were mixed amid 50bps rate hike by ECB with the DAX down 0.3%, the CAC up 0.3% and the FTSE flat. Brazil’s Bovespa was 0.8% higher. In the Middle East, UAE’s ADX and Saudi TASI were strong with 2.1% and 1% gains. Asian markets have opened mixed – Nikkei, HSI, and STI were up 0.2% each, and 0.7% respectively while Shanghai was down 0.3%. US IG CDS spreads narrowed 1.1bp and US HY spreads were tighter by 8.6bp. EU Main CDS spreads were 2.8bp tighter and Crossover spreads were tighter by 11.8bp. Asia ex-Japan IG CDS spreads tightened 8.8bp.

The European Central Bank (ECB) raised benchmark interest rates by 50 bps, more than the forecasts of a 25bp hike due to higher inflation. Thus, the ECB hiked rates for the first time in the last 11 years. ECB also launched a new bond purchase scheme, called the Transmission Protection Instrument (TPI), aimed to stop any excessive rise in borrowing costs for governments as policy tightens. Japan’s core CPI rose 2.2% in June and remained above the BoJ’s target of 2% for third straight month. On Thursday, the central bank raised its core CPI forecast for the current fiscal year to 2.3% from 1.9%.

Zhangzhou Jiulongjiang Group raised 500mn via a 3Y Sustainability bond at a yield of 4.9%. The bonds have expected ratings of BBB- (Fitch). Proceeds will be used to refinance offshore debt in accordance with the company’s sustainable finance framework.

“Price pressures are spreading across more and more sectors, worsened by a weakening euro…Most measures of underlying inflation have risen further. We expect inflation to remain undesirably high for some time…The frontloading today of the exit from negative interest rates allows the Governing Council to make a transition to a meeting-by-meeting approach to interest-rate decisions”

“The hike, as well as potential further hikes, are all aimed at bringing down inflation expectations and to restore the ECB’s damaged reputation and credibility as an inflation fighter…Today’s decision shows that the ECB is more concerned about this credibility than about being predictable.”

“The ECB’s statement signaled the welcome death of very specific forward guidance…Although the Council signaled that ‘further normalization of interest rates will be appropriate,’ it would now shift to ‘a meeting-by-meeting approach to interest rate decisions’ which would be ‘data-dependent.”

“Against this financial backdrop, the UK electorate is looking for a new leadership with a commitment to unleashing growth, tackling inflation and cutting taxation…The successful candidate will need to deliver a much-needed shot in the economic arm of the country if they are to help improve consumer confidence.”

“As the liquidity continues to drain, the most likely scenario is Hong Kong banks will need to adjust to the turn of the global monetary tide as early as the fourth quarter…Hong Kong may not be able to defy the rate hike pressure as it did in 2016-2018 unless there is a quick reversal of market sentiment.” 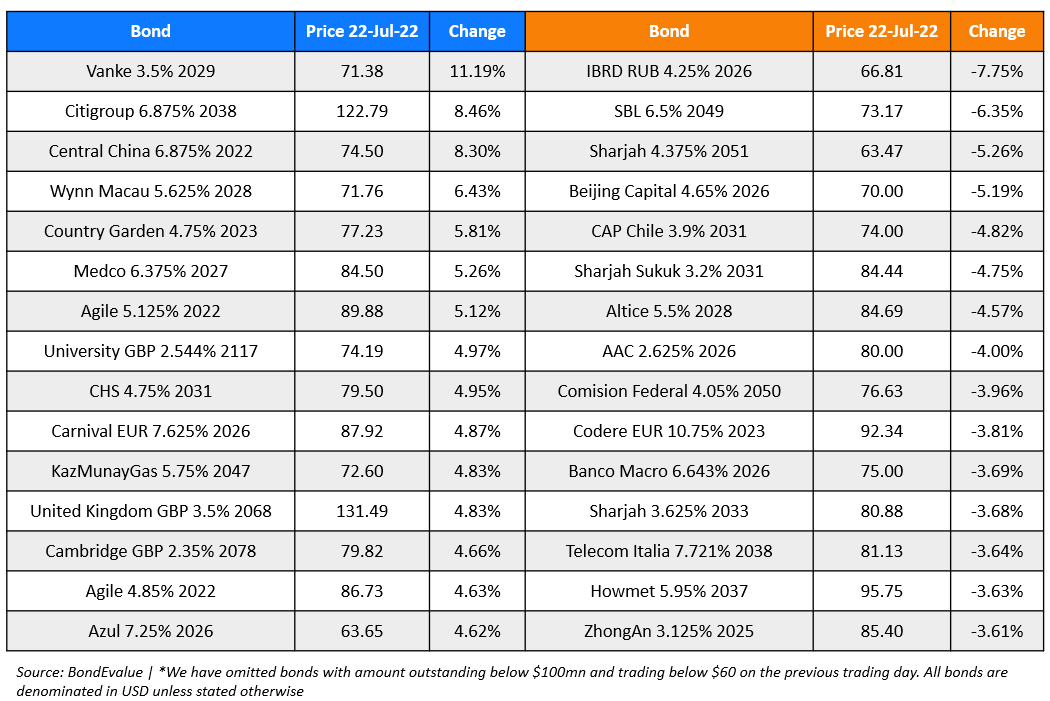 Amazon strikes $3.5 bln deal for One Medical in long march into U.S. healthcare