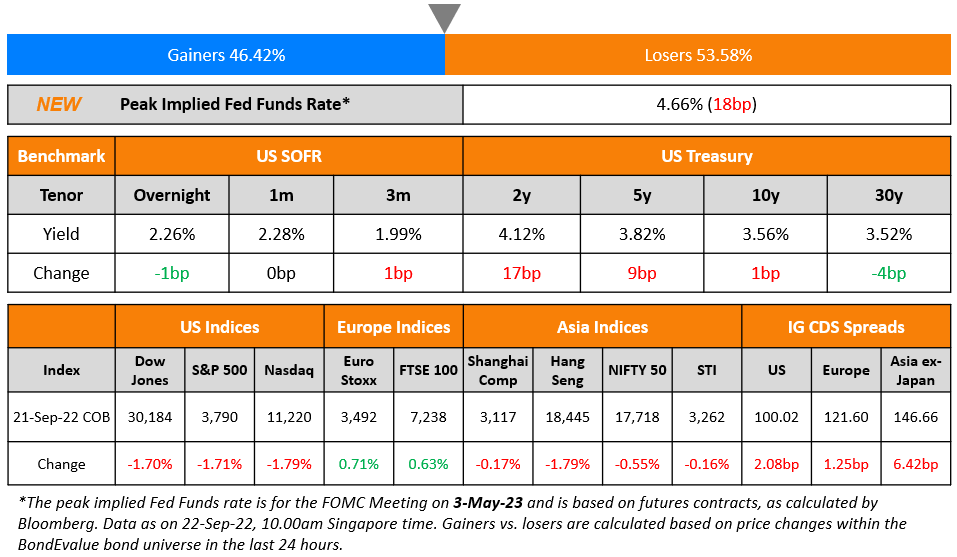 The US Federal Reserve hiked its benchmark interest rate by 75bp, with the Fed Funds target range now at 3.00-3.25%. While the rate hike was in-line with market expectations, the new dot plot indicate a more hawkish stance compared to the previous dot plot as of 15 June (see animated image below). Scroll down for detailed commentary on the FOMC meeting.

The 2Y yield jumped 16bp immediately after the rate hike to 4.12%, breaching the 4%-mark for the first time since October 2007. While it retraced afterwards towards 4%, the sell-off in the short-end gathered momentum overnight to again touch 4.12%. The 2s10s curve thus saw a 16bp bear flattening. Given the hawkish dots, the peak Fed Funds Rate currently stands at 4.66% for the FOMC’s May 2023 meeting, up 18bp.

US credit markets saw IG CDS spreads widen by 2.1bp and HY spreads widen 14bp. US equity markets ended lower on Thursday with the S&P and Nasdaq falling 1.7% and 1.8% respectively, reversing its gains earlier in the day. European equity markets ended in the green, up ~0.5%, and credit markets saw EU Main CDS spreads rise by 1.3bp and Crossover spreads move 4.6bp higher, having closed prior to the FOMC meeting. European markets did not show any negative reaction to Putin’s announcement of further troop mobilization.

The Fed dot plot is a visual representation of interest rate projections of members of the Federal Open Market Committee (FOMC), which is the rate-setting body within the Fed. Each dot represents the Fed funds rate for each year that an anonymous Fed official forecasts. The dot plot was introduced in January 2012 in a bid to improve transparency about the range of views within the FOMC. There are usually 19 dots for each year, but 1 position is currently vacant, which is why the latest dot plot has 18 dots.

“Anticipates that ongoing increases… will be appropriate”… “We’re committed to getting inflation back down to 2%”… see the need to lift the policy rate to a “restrictive level” and “keep it there for some time.”

“The Fed is on a mission, and if inflation stays high, they are not afraid to keep going… Makes owning the front end not look attractive”

“The likelihood of a recession is 99.9%. Why do I say that? The central bankers actually want a recession… It may end up being a policy mistake. But the playbook says you have to get a recession. That is the key thing that the market has to get through.

“The scale of the onshore medium-term notes is around 1 to 1.5 billion yuan [each], which can only offer marginal help to some developers. They are not big enough to solve all their funding problems”

“Private developers’ debt defaults may have peaked in the first half, while the default risk is spilling onto [state-owned] developers”

“Yuan bond issuances are a good way considering that they cannot raise more in offshore markets.” 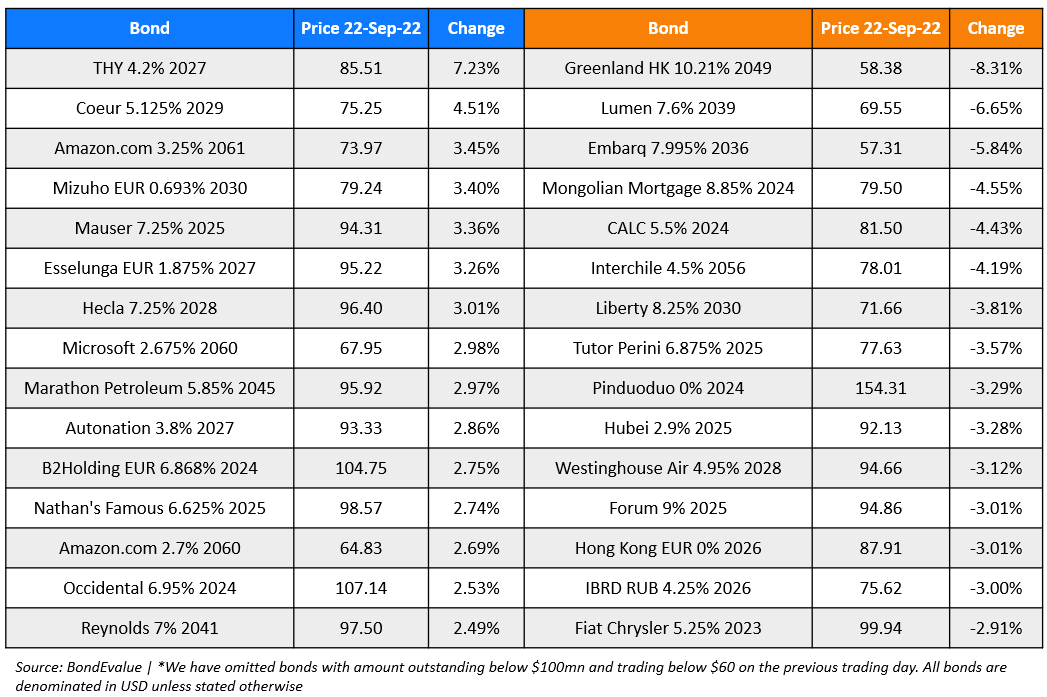