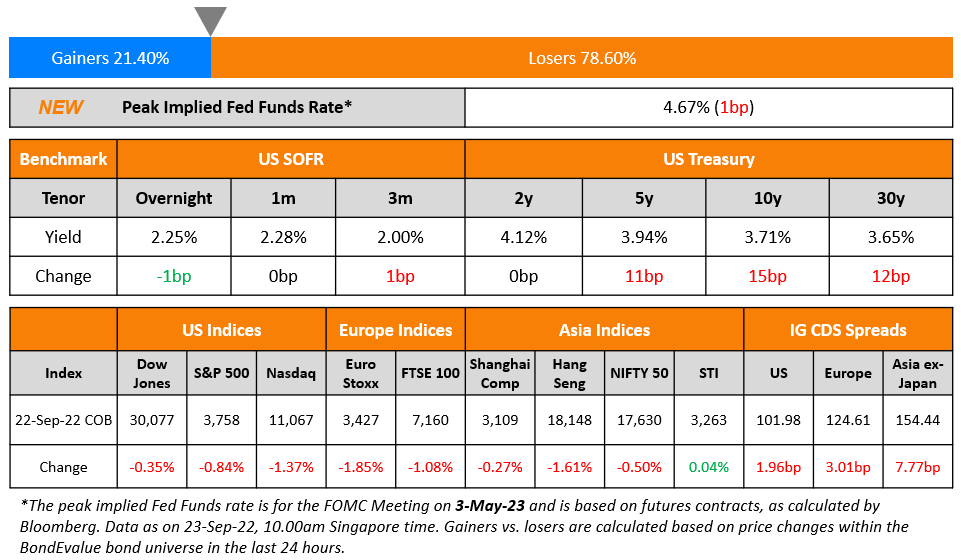 Thursday was a spike in the long-end of the US Treasury curve, leading to a 15bp bear steepening in the 2s10s. 10Y yields jumped 15bp to 3.71% and the 30Y was up 12bp to 3.65% while the 2Y was flat. This comes after the 2s10s curve bear flattened by 16bp in the immediate aftermath of the FOMC meeting a day prior. The US 30Y fixed rate mortgage rate rose to 6.29%, its highest in the last 14 years. The sell-off in the long-end yesterday could be on account of convexity hedging (Term of the Day, explained below). The peak Fed Funds Rate currently stands at 4.67% for the FOMC’s May 2023 meeting. US credit markets saw spreads widening with IG CDS spreads wider by 2bp and US HY spreads wider by 10bp. US equity markets continued to trend lower on Thursday with the S&P and Nasdaq down 0.8% and 1.4% respectively.

European equity markets were down ~1.5%, and credit markets saw EU Main CDS spreads rise by 3.1bp and Crossover spreads move 17.8bp higher. The Bank of England (BoE) hiked its benchmark rates by 50bp to 2.25% and indicated that it will respond forcefully and as necessary to counter inflation. The BoE expects inflation to peak just below 11% in October and after that to remain above 10% for a few months. Inflation in the UK in August stood at 9.9% YoY. The Swiss National Bank (SNB) also hiked its policy rate, by 75bp to 0.5% from -0.25%, thereby exiting over seven years of negative interest rates.

Asia ex-Japan CDS spreads widened 7.8bp. Asian equity markets have opened broadly negative today, down ~0.5%. The Bank of Japan (BoJ) intervened in its currency market for the first time since 1998 as the yen breached the 145-mark against the US dollar. A BoJ official said that the yen’s decline was sudden and one-sided, with the currency depreciating 20% YTD as the central bank’s policy divergence widens vs. the US. The BoJ said that it intends to maintain its negative rate policy. 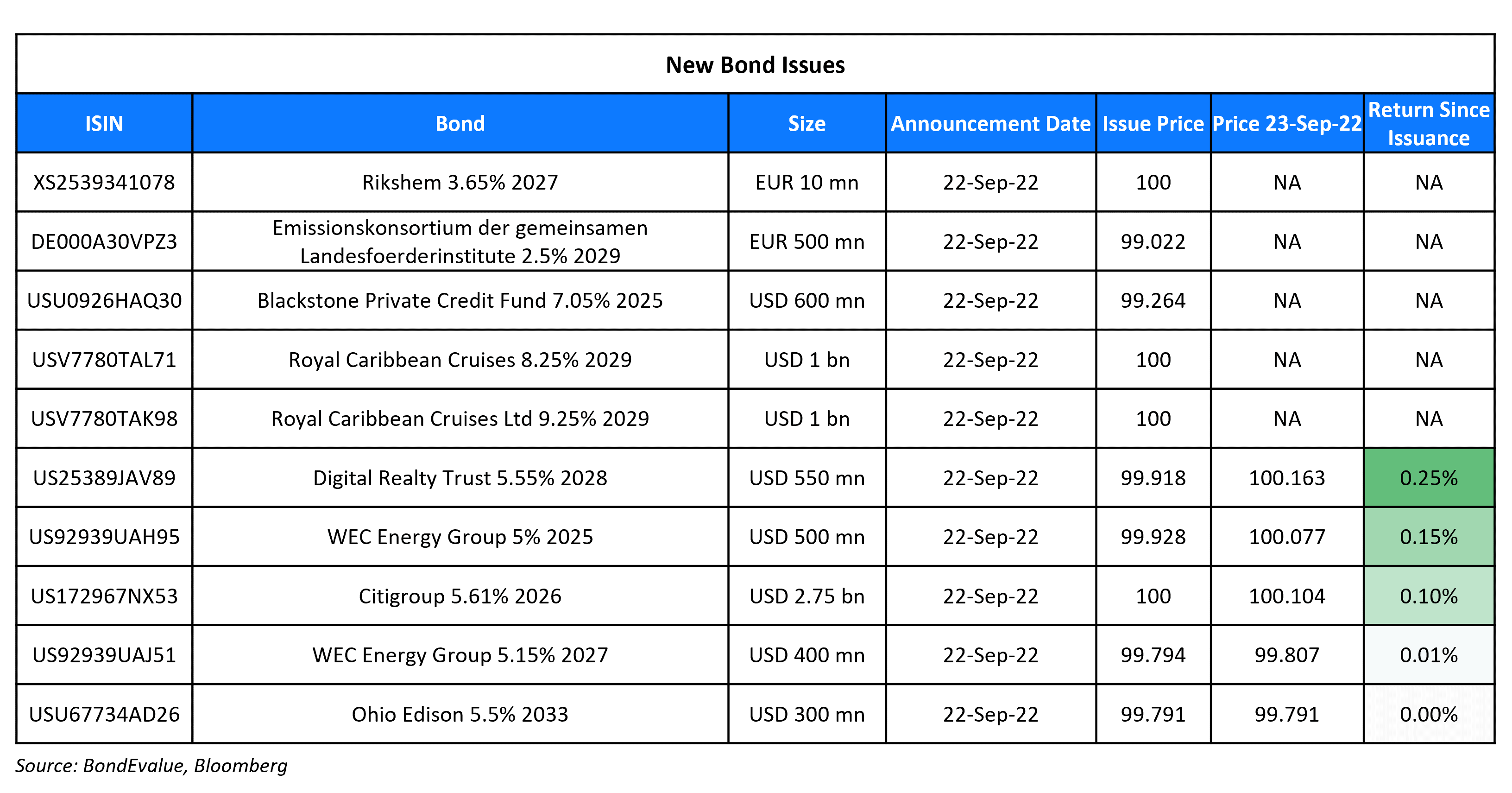 Royal Caribbean raised $2bn via a two-tranche deal. It raised

This is only the second high yield bond issuance over a billion dollars so far this month from the US and the largest in the junk bond space this month, after Nortonlifelock raised $1.5bn two weeks ago, via a dual-trancher.

Clifford Capital raised $200mn via a privately placed 5Y guaranteed bond at a yield of 4.137%. The bonds are guaranteed by the Singapore government.

Convexity hedging refers to a phenomenon of hedging portfolio interest rate exposure through bonds that stand to get impacted due to duration and convexity changes. This is most commonly used in mortgage-backed securities (MBS), given the prepayment profiles. For example, when interest rates rise, MBS investors would see their portfolio duration rise (as prepayments slowdown) and therefore they would have to cut their exposure to high duration securities – predominantly longer-dated Treasuries and swaps to keep duration levels aligned with the benchmark. Thus for example, if rates rise, principally MBS duration rises and Treasury duration falls thus changing the hedge ratio of MBS vs. Treasuries – effectively having to sell more Treasuries than otherwise to hedge their MBS portfolios. With the US 30Y fixed-rate mortgage rates hitting 6.29%, its highest since 2008, convexity hedging could have been among the factors causing the latest sell-off in ultra-long end yields.

On Ray Dalio Warning Stocks and Bonds will Fall More

“Right now, we’re very close to 0% a year. I think it’s going to get worse in 2023 and 2024, which has implications for the elections… They need interest rates (short and long rates) up to about 4.5%, and it could be even higher than that level… Who’s going to buy those bonds?… We are in this mode of ‘reducing financial assets”

“Our financial performance will be further boosted by the constructive rate environment, that was not part of our plan”… bank will give a “substantial upgrade” to its targets alongside third-quarter results.

“There’s no prognosis for when things will begin to reopen and when you can at least get to a cash-flow-positive environment… At some point, you’re going to have to cut costs because you’re going to run out of money”

“It’s just a matter of people becoming impatient with this idea that the recovery is coming, and then it never comes… We need to see some light at the end of the tunnel. People need to see that at least a trend is going in the right direction as opposed to continuing in the current path”

“I don’t think there’s a risk of a sharp adjustment. The market transactions are low, but there’s no need to adjust control measures.” 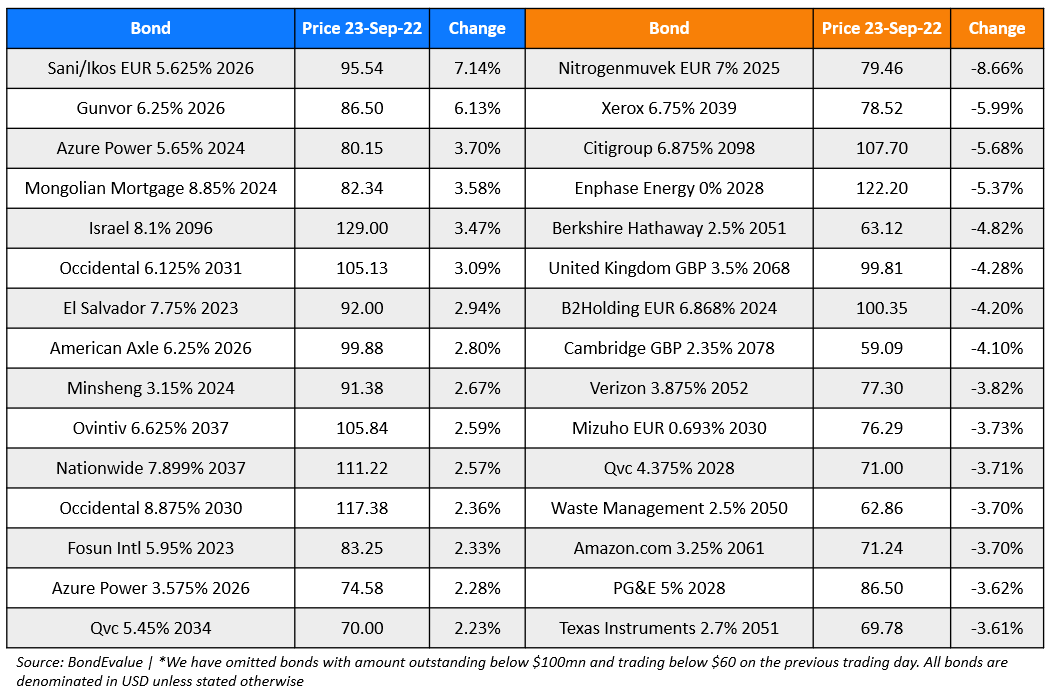