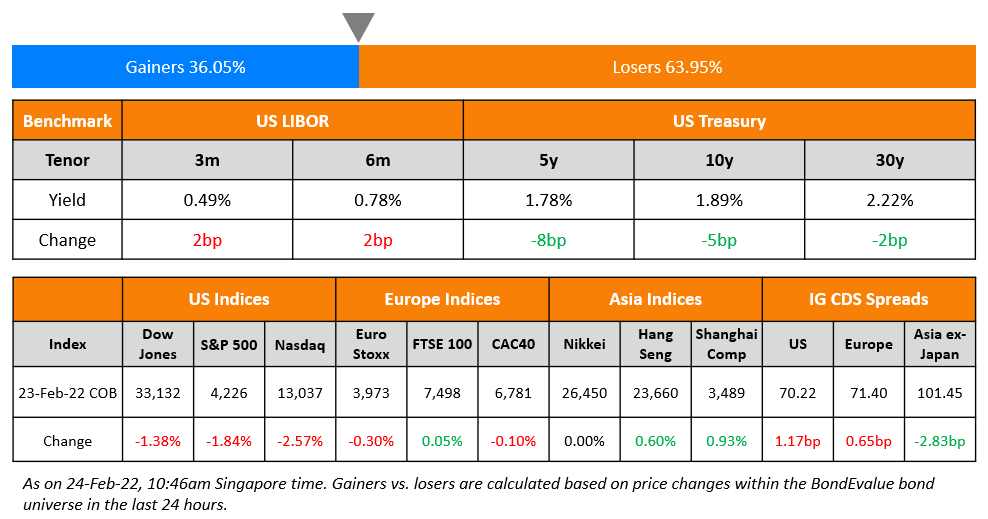 US equity markets dropped again on Wednesday with the S&P and Nasdaq down 1.8% and 2.6% with sectoral losses led by Consumer Discretionary and IT down over 2.5-3.5%. The US 10Y Treasury yields are down 10bp this morning to 1.89% on the back of Russia’s “military operation” in Ukraine (scroll below for details) this morning. European markets were relatively steady yesterday – DAX was down 0.4%, CAC was down 0.1% and FTSE was up 0.1%. Brazil’s Bovespa closed 0.8% lower. In the Middle East, UAE’s ADX was flat and Saudi TASI was down 0.3%. Asian markets have dropped sharply – Shanghai, HSI, STI and Nikkei are down 0.9%, 2.8% 2.7% and 2.3% respectively. US IG CDS spreads widened 1.2bp and HY spreads were 5.7bp wider. EU Main CDS spreads were 0.7bp tighter and Crossover CDS spreads were 1.6bp wider. Asia ex-Japan CDS spreads were 2.8bp tighter. 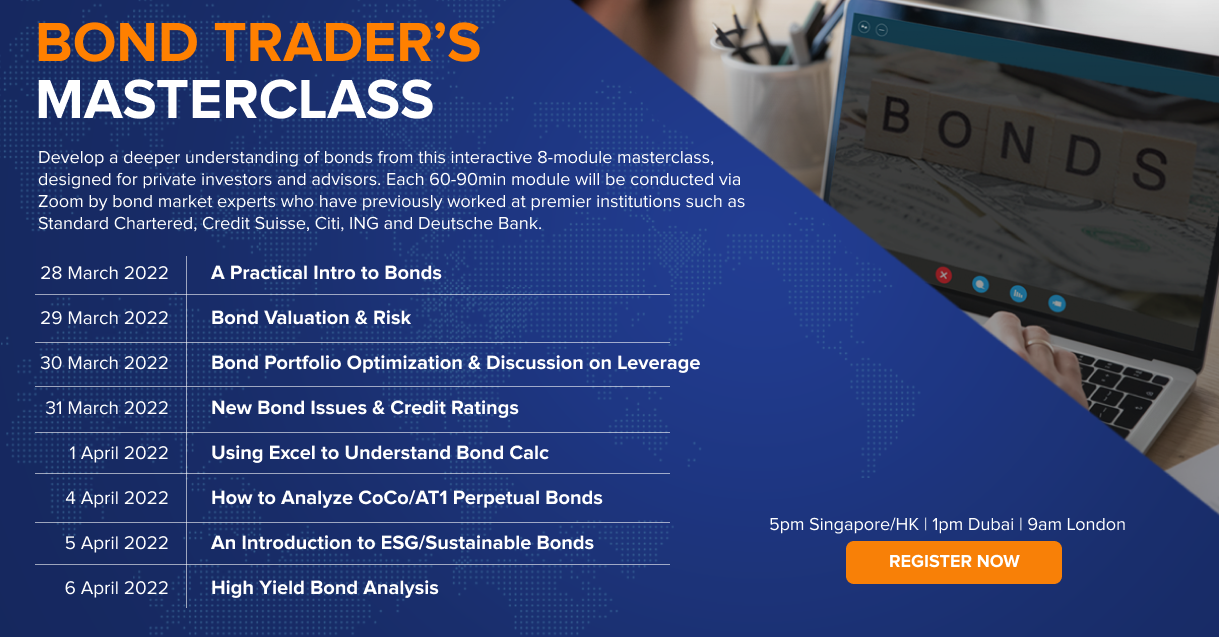 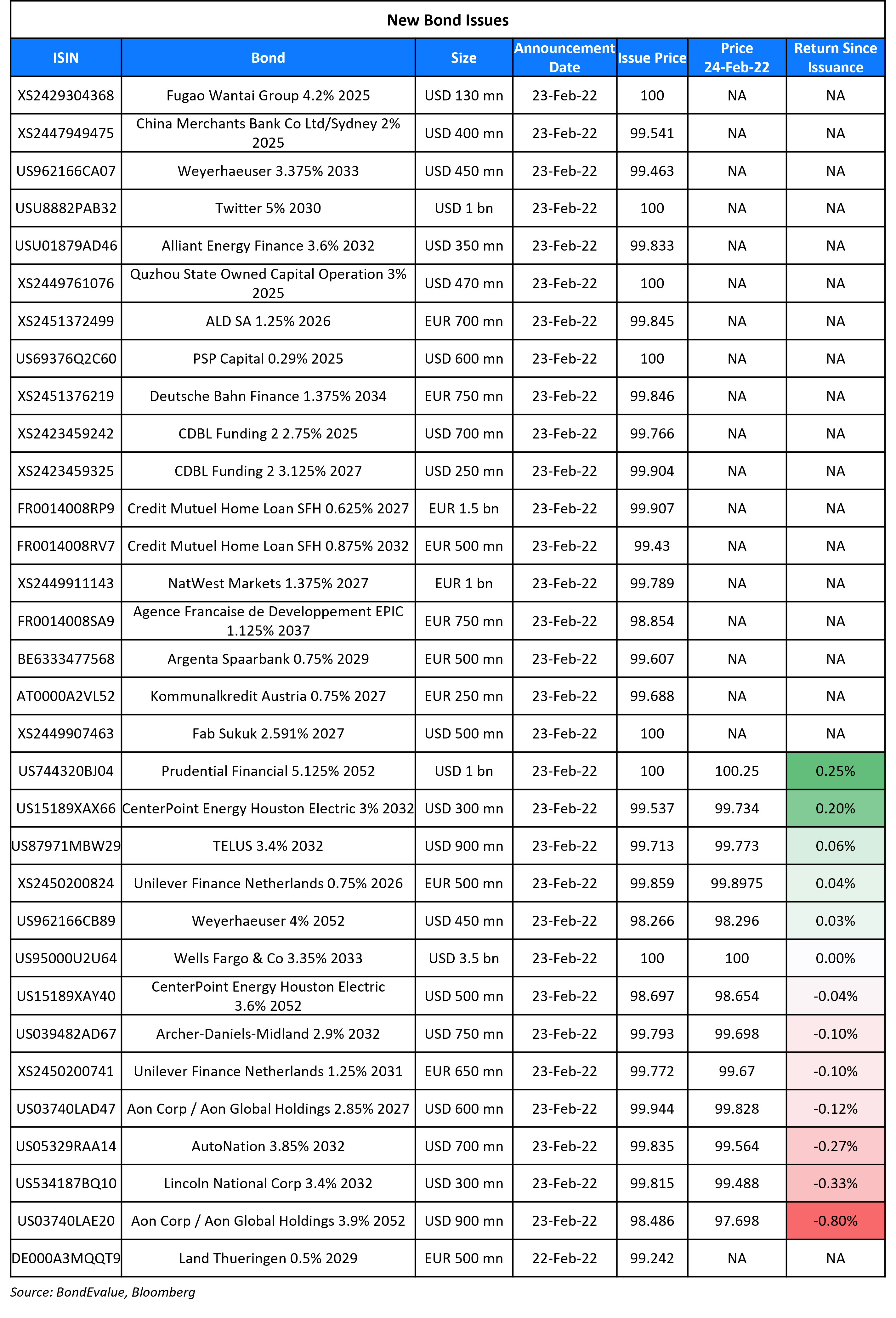 Twitter raised $1bn via an 8Y will-not-grow (WNG) bond at a yield of 5%, inside initial guidance of 4.875/5% area. The bonds are rated Ba2/BB+. Proceeds will be used for general corporate purposes including capex, investments, repayment of debt, repurchases of common stock, working capital and potential acquisitions and strategic transactions.

CMB Sydney raised $400mn via a 3Y green bond at a yield of 1.779%, 42bp inside initial guidance of T+80bp area. The bonds were rated A3, and received orders over $1.25bn, x issue size. Proceeds will be used to finance and/or refinance green projects with a renewable energy theme.

Quzhou State-owned Capital Operation raised $470mn via a 3Y sustainable bond at a yield of 3%, 35bp inside initial guidance of 3.35% area. The bonds are rated BBB-. The issuer is the largest state-owned infrastructure construction and state-owned assets operation vehicle in Quzhou city. Proceeds will be used for financing and/or refinancing new or existing eligible projects.

Huai’an Investment Holdings Group raised $300mn via a 3Y sustainable bond at a yield of 3.3%, 40bp inside initial guidance of 3.7% area. The bonds are unrated. Proceeds will be used for offshore debt repayment. The issuer is the core infrastructure construction and investment entity in Huai’an, wholly owned by the Huai’an SASAC.

Fugao Wantai Group raised $130mn via a 3Y bond at a yield of 4.2%, 30bp inside initial guidance of 4.5% area. The bonds are unrated. Proceeds will be used for construction projects and to replenish working capital. The Chinese company operates in urban construction and real estate, among other businesses.

“The big one that has so far not happened would be to ban trading or holding or both of legacy bonds. We are underweight Russia in the funds in any case. We reduced before this got really bad”.

While the sanctions mean Russia will be unable to borrow abroad for a while, the country is well positioned to get by without foreign funding. If “there is no more escalation, then we might not see much additional selling as prices have already adjusted. But if there is additional escalation that results in additional stronger sanctions, then all bets are off”.

“It makes it much harder for Russia to issue external debt, but they really don’t need it”

Huang Yiping, a former member of the PBOC’s monetary policy

“Over the this cycle, we project the PBOC to cut rates by 30 basis points and the RRR by 200 bps in total… That leaves another 20 bps of cuts in the one-year MLF rate and 100 bps of reductions in the RRR to go, probably spread out in the second and third quarter”.

The board says that review includes a closer look at “market changes since the accounting standard was issued” back in 2018….and how responsive the accounting standard has been to those market changes… In that context, many stakeholders have provided information about the development of loans with interest rates that vary depending on whether the borrower meets pre-determined ESG targets.” 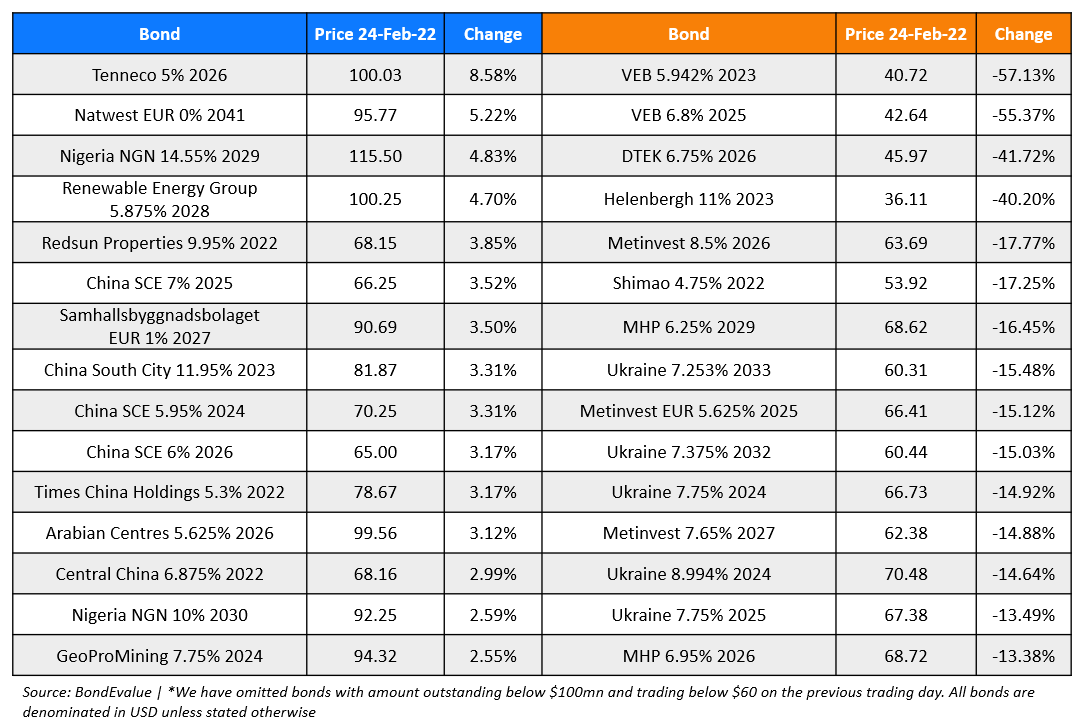