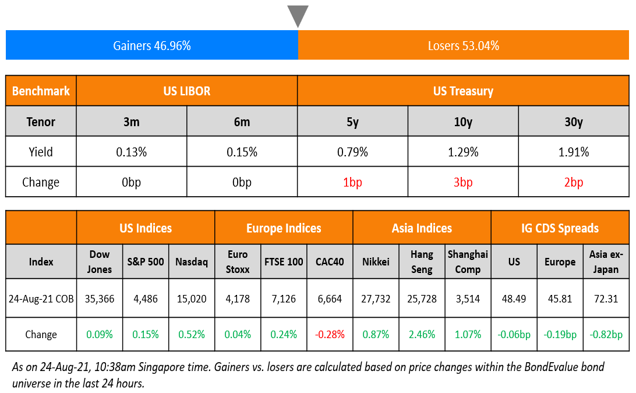 US markets rose for a fourth straight day to close at new records after Chinese tech stocks staged a recovery – S&P and Nasdaq gained 0.2% and 0.5%. Energy, up 1.6% led the gains for a second day,  followed by Consumer Discretionary, Financials, Materials and Industrials that were up more than 0.5%. Consumer Staples, Real Estate and Utilities on the other hand were down over 0.5%. European markets had a mixed day – DAX and FTSE were up 0.3% and 0.2% while the CAC was down 0.3%. Saudi’s TASI gained 0.7% while UAE’s ADX was broadly flat. Brazil’s Bovespa staged a impressive recovery and was up 2.3%. Asian markets are having a mixed start – HSI and Singapore’s STI are up more than 0.5%, Nikkei is up more than 0.3% while Shanghai was broadly flat. US 10Y Treasury yields rose 3bp to 1.29%. US IG tightened 0.1bp while the HY CDS spreads tightened 1.1bp. EU Main and Crossover CDS spreads also tightened 0.2bp and 1.1bp respectively and Asian ex-Japan CDS spreads tightened by 0.8bp. 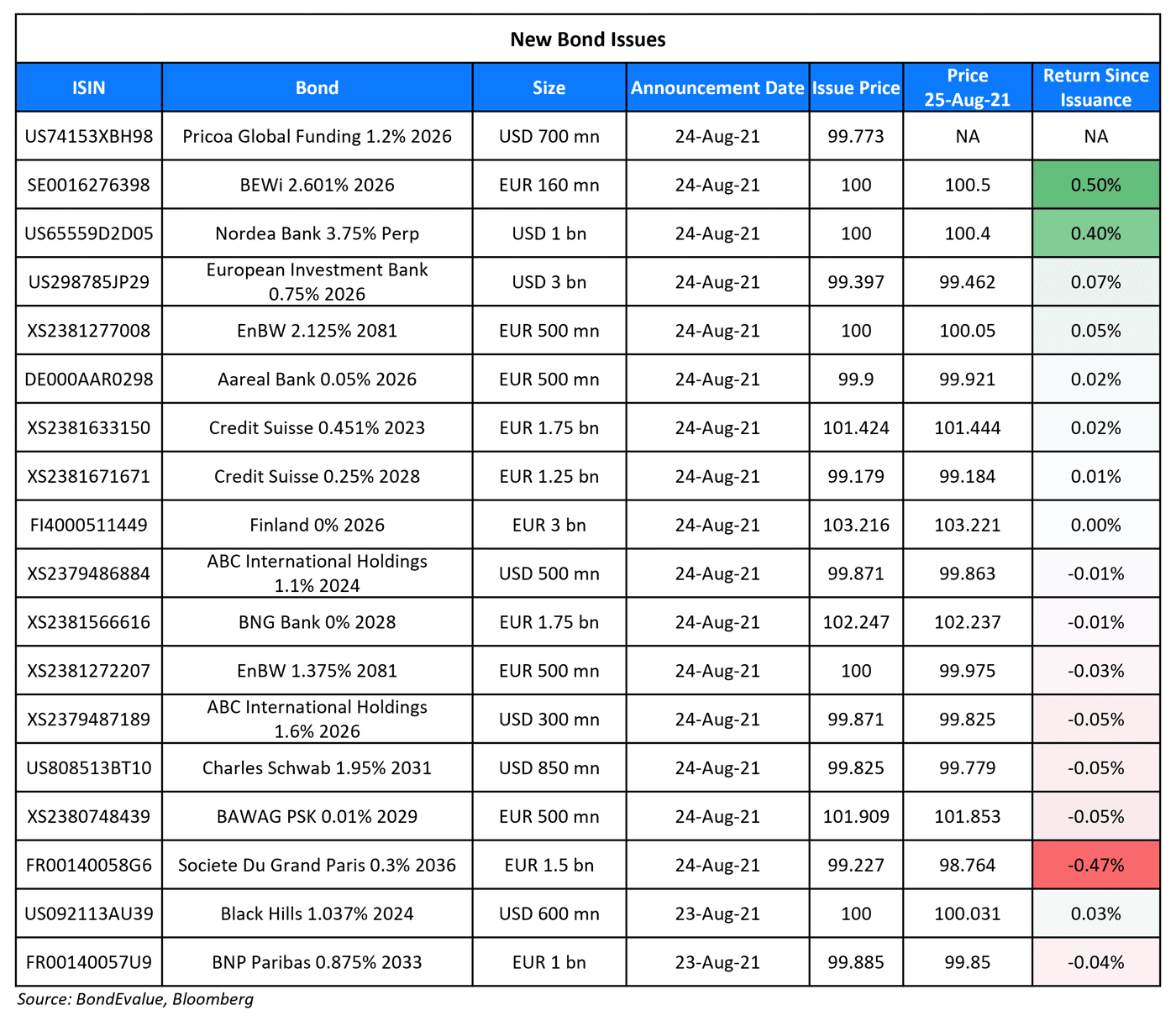 Nordea Bank raised $1bn via perpNC8 AT1 at a yield of 3.75%, 62.5bp inside the initial guidance of 4.375% area. The bonds have expected ratings of  BBB/BBB+. The coupon is fixed until the first reset date of September 1, 2029. If not called, it will reset on that date and every 5Y thereafter (non-step) to the 5Y Treasury + 260.2bp, payable semi-annually in arrears on the principal amount, subject to Interest Cancellation. The trigger level is set at CET1 ratio of 5.125% of Nordea Group or Nordea Bank. The new AT1s were priced 75bp over its older 6.625% Perps callable in March 2026.

These are a type of Eurobond issued and traded in the US and denominated in USD. In essence, if a non-US based company issues a USD bond which is traded in the US, the bond is considered a Yankee bond. This is in comparison to a Eurodollar bond that is issued by a foreign entity denominated in USD, but the bonds are issued and traded outside of the US.

Indonesia’s Medco Energi recently announced plans to issue up to $800mn of Yankee bonds with a maximum of 8% annual coupon and expected tenor of 7Y.

On the view that credit can be a good way to hedge Fed – in a note by Marko Kolanovic, strategist at JPMorgan Chase, and his team

“While the market will likely hold up through Fed tapering, those wishing to hedge associated risk should consider using credit or credit volatility rather than equities given credit’s more limited upside and lower implied volatility levels.” “We are positive on spreads but anticipate near-term choppiness due to delta risks and Jackson Hole.”

On the recent bond rally a signal of bad news – in a report by Bank of America strategists Paul Ciana, Adarsh Sinha and Janice Xue“This cross asset conundrum casts a shadow over risk taking in 2H21.” “Rising ratios suggest a rotation into safety and/or rebalancing trend that can continue while supports remain or top form.”

On the optimistic outlook for China – Cathie Wood, head of Ark Investment Management

“I’m not pessimistic about China longer run because I think they’re a very entrepreneurial society.” “Sure, the government is putting more rules and regulations in, but I don’t think the government wants to stop growth and progress at all.” “What I will say, though, is I’m a little more optimistic about the United States and other economies, so it’s more of a relative sort of thing.”
On China’s regulators’ plan to overhaul scandal-Hit Corporate Bond Market
Danny Chen, CEO of Fitch (China) Bohua Credit Ratings Ltd
“China’s bond markets are governed by multiple regulators with different sets of requirements, which could lead to regulatory arbitrage.” “Now the unified application of the securities law to bond issuance will help streamline the process and eliminate the difference in regulations. This is a positive step for the development of the industry.”
On the possibility that Citic becomes more important to the government following Huarong bid – in a report by S&P
“CITIC Group Corp. could increase its importance to the Chinese government, if the conglomerate proceeds with plans to make a sizable investment in the struggling China Huarong Asset Management Co. Ltd.” 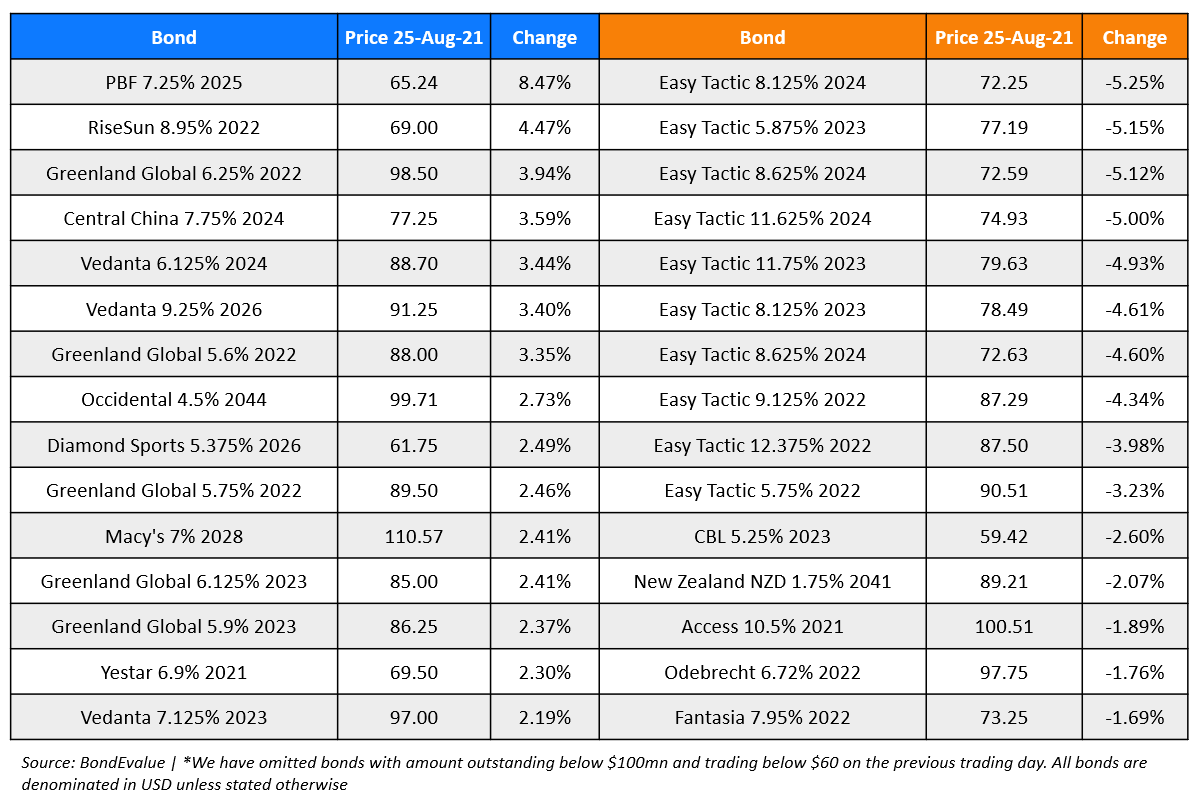