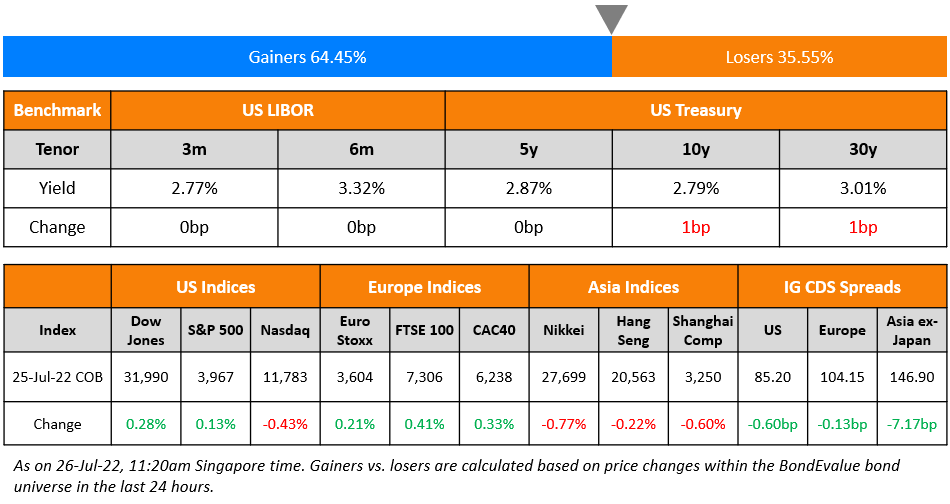 US equity markets began the week mixed with the S&P up 0.1% and Nasdaq down 0.4% on Monday. Sectoral gains were led by Energy, up 3.7% and Utilities up 1.2%; Consumer Discretionary was down 0.9%.  US 10Y Treasury yields moved 1bp higher to 2.79%. European markets were mixed – DAX was down 0.3%, while the CAC and FTSE were up 0.3% and 0.4% respectively. Brazil’s Bovespa trended 1.4% higher. In the Middle East, UAE’s ADX and Saudi TASI fell 0.8% each. Asian markets have opened mixed – Shanghai and HSI were up 0.8% and 1.4% respectively while Nikkei and STI were flat. US IG CDS spreads tightened 0.6bp and US HY spreads were tighter by 0.5bp. EU Main CDS spreads were 0.1bp tighter and Crossover spreads were tighter by 1.8bp. Asia ex-Japan IG CDS spreads tightened 7.2bp.

All eyes are now on the FOMC meeting on 26-27 July, where market participants are pricing in a 77.5% probability of another 75bp rate hike, as per CME data. 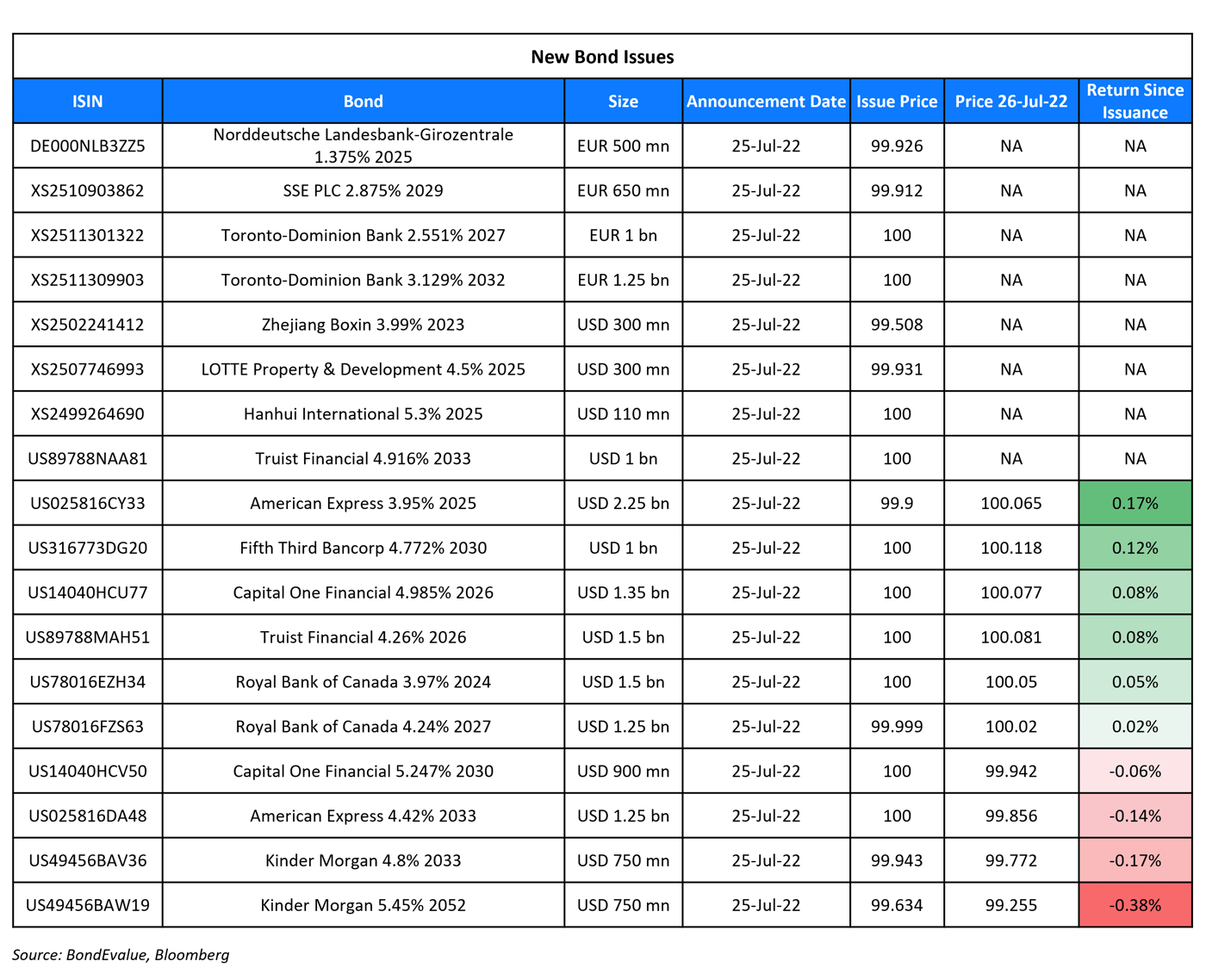 Royal Bank of Canada raised $2.75bn via a two-tranche deal. It raised

The senior unsecured bonds have expected ratings of A1/A. Proceeds will be used for general corporate purposes.

American Express raised $3.5bn via a two-tranche deal. It raised

The senior unsecured bonds have expected ratings of A2/BBB+. Proceeds will be used for general corporate purposes.

Lotte Property raised $300mn via a guaranteed 3Y Green & Sustainability bond at a yield of 4.525%, 35bp inside the initial guidance of T+190bp area. The bonds have expected ratings of Aa3 (Moody’s). Proceeds will be used to fund or refinance new and/or existing eligible assets under its sustainable finance framework.

The IMF is in discussion with Pakistan about the potential transfer of Special Drawing Rights (SDR) worth 2bn ($2.6bn).

“Sentiment is horrible…Currency weakness, dollar debt, higher fuel costs and economic slowdown are a recipe for turbulent flying ahead.”

“Argentina’s tumultuous financial record uniquely affects the bank’s costs…As much as the IDB wants to approve new funds for Argentina, it cannot rubber-stamp requests to do so without prudently ensuring it has a development impact.”

“Passing through these cost increases to the end consumer is more complicated and typically takes time. Many, if not most, travelers usually pay with their credit cards, and if you carry a balance, the rates these cards charge can be prohibitive.”

Ignazio Visco, Governor of the Bank of Italy

“We will see depending on data how to go on, but this does not mean that we are not going to proceed in a gradual way…Gradualism means moving step by step, not being very slow…there is no way now to say now whether the ECB’s next step should be a quarter-point or half-point increase”

On ECB’s New Bond Tool That ‘Plugs Gap’ Between Instruments

Martin Kazak, Governor of the Central Bank of Latvia

“TPI, in my view, plugs the gap between the PEPP reinvestment flexibility and OMT…I don’t think that it would be necessary to come up with very detailed and specific manuals on each and every situation that may arise…You can’t forecast the future to the precise details…It’s not one single variable that would automatically switch on the program…There is a set of variables and data that we look at. We will know fragmentation when we see it.”

“On the whole, our view is that the data strongly suggest we are not currently in a recession, and that this year’s first quarter growth was likely favorable when looking at income, employment, and overall production.” 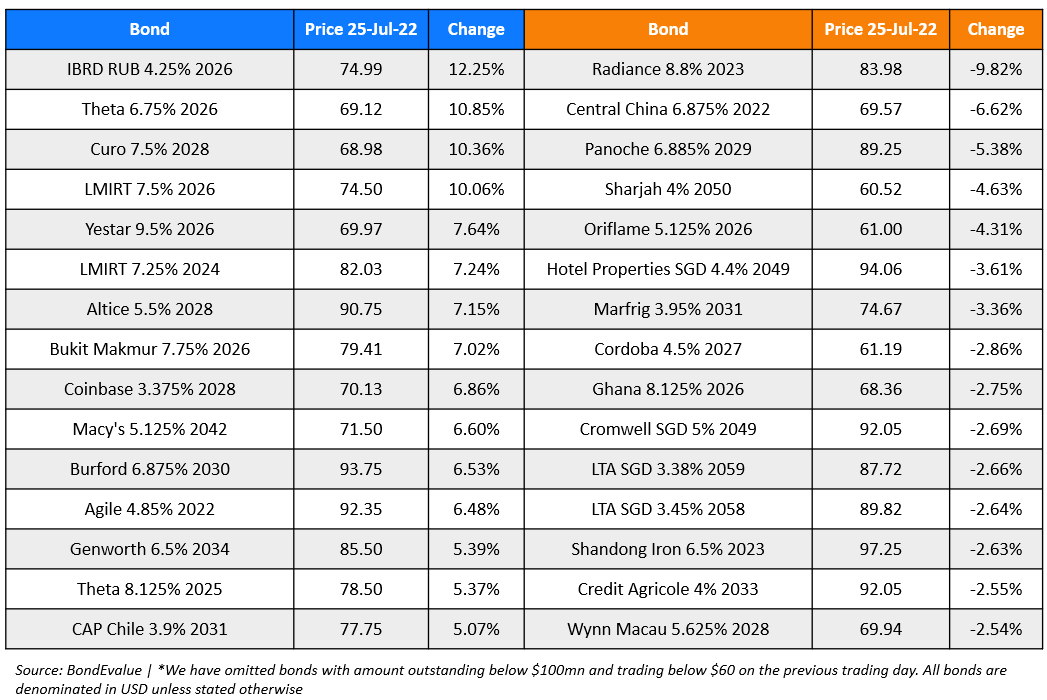 HDFC plans to raise up to $1.4bn via onshore bonds issue